Five unique bites to spice up your ice fishing season 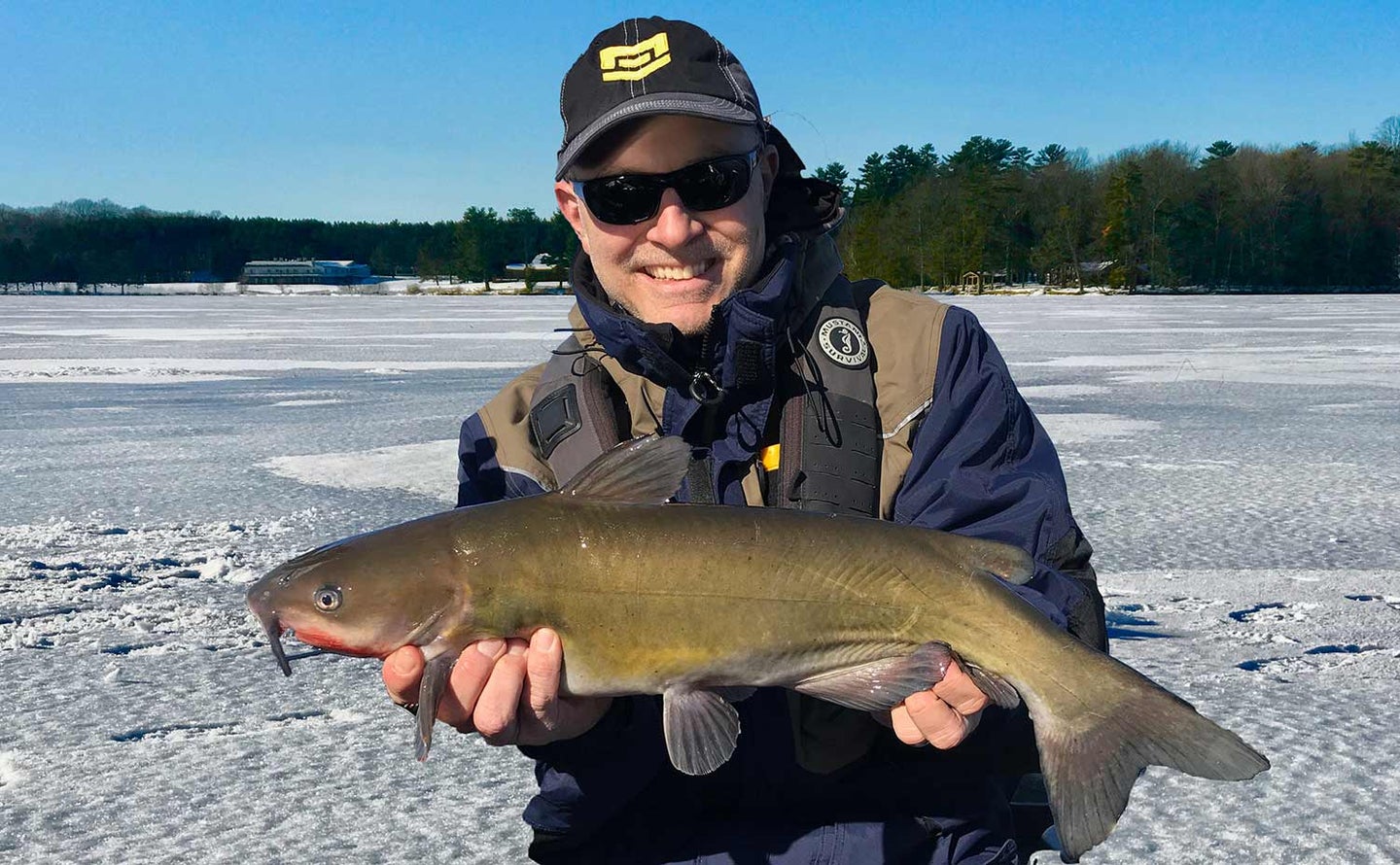 Hardwater anglers know the drill, so to speak, when it comes to picking a target species to chase through the ice. It’s probably going to be pike, walleyes, or panfish. It’s true, those species comprise the bulk of the fishing opportunities across the ice belt, and no matter where you live in the northland, it’s likely that you won’t have to drive too far to find a reasonable opportunity to set tip-ups for northerns, jig for walleyes along a weedline, or drop a crappie jig in pursuit of a midwinter fish fry.

If variety is indeed the spice of life, then changing up your ice fishing game to include some of the more overlooked wintertime species can help end the tedium that comes with catching the same old thing each day. But variety doesn’t necessarily have to mean targeting perch instead of crappies, or sauger instead of walleyes. Indeed, a number of unique ice fishing opportunities scattered across the ice belt can breathe excitement back into predictability. Here are five compelling ways to spice up your ice season.

It’s hard to imagine a fish that evokes the dog days of summer more than the catfish. Generations of anglers have wiled away a lazy afternoon on the banks of a slow-moving river with a long rod and a pail full of nightcrawlers, a stringer of feisty channel cats at their feet. Yet, in some lakes and reservoirs in the northland, catfishing doesn’t end when the leaves fall from the trees. Indeed, catching channel cats through the ice can be just as much fun as fishing them in the summer, with one big added benefit: no mosquitoes!

Where to find them: Winter channel cat locations are often associated with deep holes and adjacent flats, frequently in depths of 25 to 40 feet. However, hardwater cats – at least the active, catchable ones – are rarely bottom-oriented in this deep water. Rather, channel cats form large, mobile schools that will suspend within the water column, often as high as just a few feet beneath the ice. In fact, once you locate a school, it’s not uncommon to have dozens of fish on your ice fishing sonar’s display at a single time. Because the schools are so mobile, it’s important to remain on the move when searching for cats; drill and check lots of holes, and don’t settle into any particular spot until you see consistent sonar activity from suspended fish below.

How to catch them: Leave the stout summer catfish tackle at home during the winter. Gravitate instead toward crappie- or walleye-caliber rods, reels and line. Typical lures include small jigging spoons or teardrop jigs tipped with a live minnow or even a piece of oily chicken liver – after all, we are chasing catfish. When it comes to presentation, less is generally more for hardwater cats. Often, suspending a bait beneath a sensitive foam bobber, set at or just above the returns on your sonar unit, is all it takes to get roaming winter cats to commit. And just in case you’re wondering – yes, cats caught through the ice are firm and delicious.

Yes, there is such a thing as a yellow bass. A somewhat more compact variant of the more widely distributed white bass, a large yellow bass might grow to the same size as an average crappie –in the neighborhood of a half-pound – but don’t let their size fool you. In the lakes they inhabit, yellows can be found in abundance, remaining active beneath the ice and providing both excellent action and table fare.

Where to find them: Yellow bass are at the heart of popular regional ice fisheries in northern Iowa and in scattered pockets elsewhere. For example, a yellow-bass ice fishing tournament in Clear Lake, Iowa has been growing exponentially since its inception, drawing more than 300 teams from across the nation in 2019. Where else can you stack up your best 30 fish – yes 30 – against everyone else’s stack of 30? Fun stuff!

How to catch them: Yellow bass are an aggressive, schooling panfish that graze primarily on small baitfish, shad, and insects. As a result, you’ll catch plenty of yellows with small, flashy spoons and tungsten jigs dressed with waxworms or spikes. Use light or ultra-light power rods with fast or extra-fast action to enjoy the scrappy fights that active yellows provide. And don’t feel bad about taking a few home for the pan – yellow bass have high reproductive success and in many lakes, yellows are considered an invasive, undesirable species. Add this fish to your must-try list this season!

Read Next: 10 Great Ice Fishing Lures for Walleye and Perch

largemouth bass remain reasonably active and quite catchable beneath the ice. While bass may cause hardwater purists to turn up their noses in disdain, there are few things more exciting than seeing a big largemouth’s open mouth struggling to squeeze through an eight-inch augered hole. To me, the general lack of enthusiasm for chasing bass through the ice is misplaced, given their relative abundance, the ease with which they can be triggered to bite, and the sport they offer on the line.

Where to find them: Begin your search for hardwater largemouths along the outside edges of lush weedbeds. Just as in summer, bass will prowl the weeds in pursuit of baitfish. You will also find them on adjacent mid-depth flats which serve as bass staging areas between trips to the weedline buffet. Bass, of course, are larger than any of the typical panfish or smaller walleyes that might be found in these areas, and as a result, are easy to identify on your ice sonar unit. Indeed, strong sonar returns – the thick, red ones – that lazily move into and out of your cone-shaped sonar beam are good indications that bass are underfoot.

How to catch them: Two general presentations will help you put winter largemouth on the ice. First, consider suspending a four to five-inch sucker minnow beneath a tip-up, especially along deep weed edges. I like suckers for bass because they are less energetic than other tip-up bait choices, and the suckers’ more subdued swimming motions and limited evasive actions are good complements to the largemouth’s general disposition beneath the ice. Out on the flats, consider a small jigging spoon dressed with a small fathead minnow hooked once in front of the dorsal fin. Exaggerated jigging motions will help attract bass from a distance, and once the bass is within your sonar cone, reduce your movements down to a simple, slow lift-and-shake above the fish’s position in the water column. If you can get the bass to move several feet up, it will likely commit.

Read Next: 2 Killer Late-Season Rigs for Big Pike Through the Ice

In pockets across the ice belt, small groups of devotees spend their winters in pursuit of silvery, hydrodynamic rocketships: lake whitefish. With tiny mouths, large eyes, and long, muscular bodies, whitefish — and their close cousins, cicsoes or tulibees —feed actively beneath the ice and are prized for their fight as well as their quality on the table, especially when smoked.

Where to find them: Whitefish have specific needs in terms of water quality, average depth and temperature that restrict their distribution relative to more common ice fishing targets. Indeed, relating the needs of whitefish to those of trout is a useful comparison: both need cold, deep, clean water to thrive. In the Midwest, Lake Michigan’s Green Bay has come to support a thriving ice fishery for whitefish, where sport anglers have harvested 150,000 to nearly 200,000 lake whitefish in recent winters. Minnesota’s Lake of the Woods and Rainy Lake also support catchable numbers of whitefish, as does Lake Superior’s Chequamegon Bay and many smaller, deep lakes across the northern tier of states and Canada.

Whitefish are residents of deep flats. They will not be tightly associated with structure or breaklines like walleyes or lake trout, but will often be found lingering within 50 to 100 yards of such places. Some of my favorite whitefish spots are deep channels connecting two large bodies of water; I perceive that whitefish use these channels to move from one lake to another, and I can intercept those fish as they travel. Unlike some of the other fish you might chase in deep water, whitefish will not necessarily reveal their presence on your sonar unit consistently. Loose schools of whitefish swim rapidly within the water column, often suspended 15 to 20 feet off the bottom, and appear as fleeting, moderate-strength sonar returns that flicker in and out of reality. If you wait to see this sonar activity before dropping your bait, you’ll be disappointed as the fish are already long gone.

How to catch them: Present compact baits, like small jigging spoons or tungsten jigs, packed with waxworms or spikes to tempt whitefish. Drop your bait to the bottom and stir up a little sediment. Then, swim that bait up into the water column, and continue to make pronounced vertical movements to call whitefish toward you. Pause and shake the bait at the end of each vertical movement cycle, and be prepared for a whitefish to appear from seemingly out of nowhere and attack your bait. If you repeat this cycle several times over the course of 5 to 10 minutes without any bites or electronic evidence for the presence of whitefish, then it’s time to search for more fertile grounds.

The venerable eelpout, also referred to as the burbot or lawyer, is quite possibly the least appreciated fish to swim in lakes across the ice belt. This is a cold-water fish that is only rarely caught during the warmer months, as ‘pout move deep to remain within their preferred thermal range. However, as winter drags on, these slimy, whiskered, and aggressive fish move to shallow reefs and deep-water humps to spawn. Indeed, eelpout are quite unusual in that their reproductive alarms often sound in February and March, frequently associated with those months’ cold, bright full moons. Oh, and I did I mention that eelpout are typically most active at night? Yes, the burbot is a bit backwards.

Where to find them: There is a lot to love about the lawyer. First, they can get big – quite big in fact. Five to eight pound ‘pout are common, and record-sized fish can flirt with 20 pounds. Second, eelpout are aggressive beneath the ice, especially after dark. This means that a good night chasing burbot might witness 10, 15, or even 20 big fish coming topside. Third, ‘pout are, quite simply, delicious. A true freshwater cod, eelpout are often referred to as, “poor-man’s lobster.” Boil up some burbot chunks in 7-Up and dredge them with butter – a real show-stopper!

How to catch them: Eelpout fishing is a shallow water game played on the tops of rock or cobble-strewn reefs and humps. Lots of ‘pout are caught in water that is no more than 15 feet deep. Arm yourself with rods and reels that you might use for big walleyes – the Lake Winnipeg or Lake Erie varieties. Most ‘pout baits are simple: big, heavy jigging spoons with lots of glow. Dress the spoon’s treble hook with a bunch of fathead minnows, and proceed to pound that spoon on the bottom until it gets whacked by a burbot. Then, hang on tight because you’ve got an angry lawyer on the line!