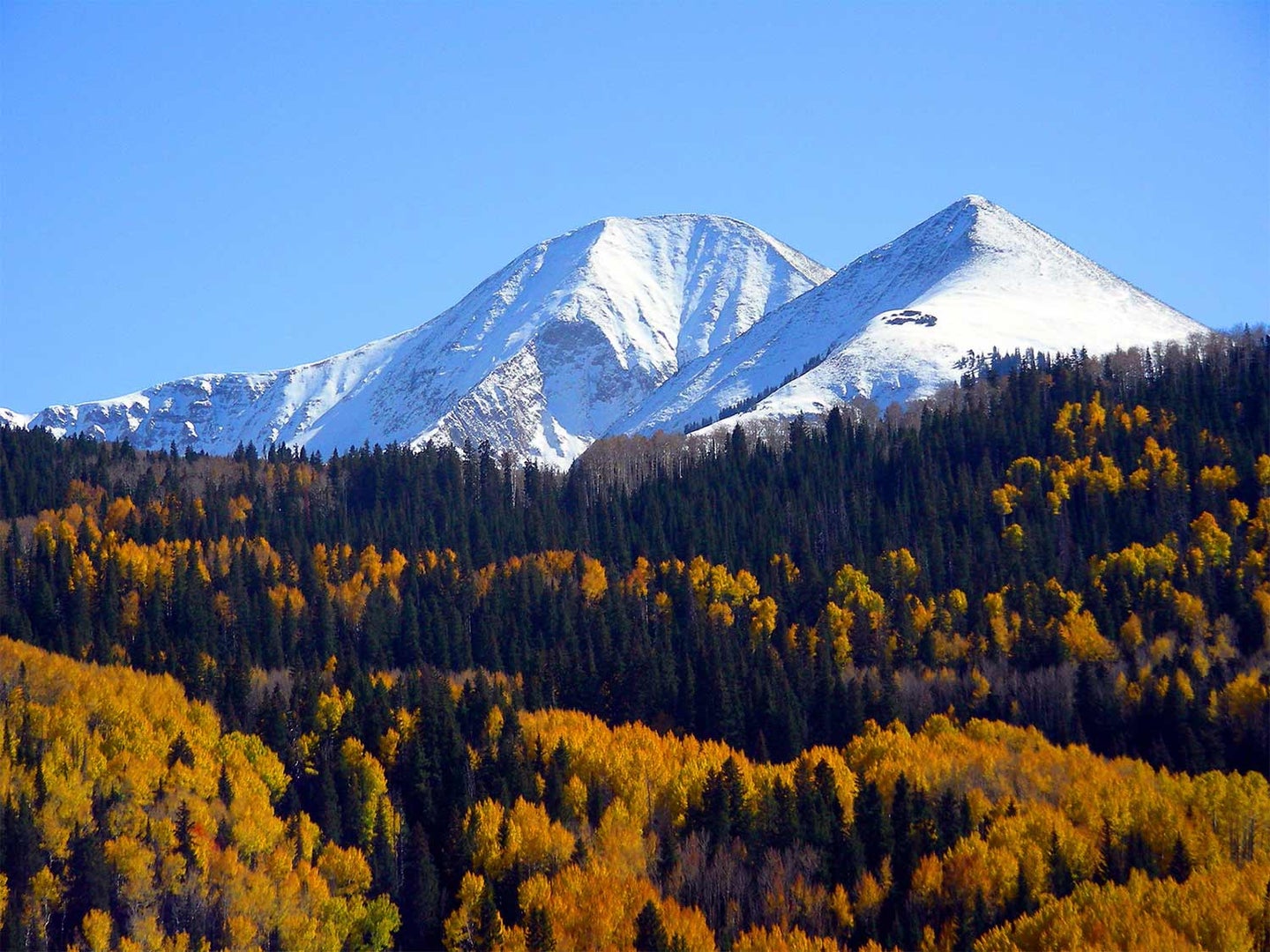 The Tongass National Forest in Alaska is getting most of the publicity around a pending exemption from the Roadless Rule, which prevents new road building on certain Forest Service land. But in the Lower 48, Utah officials might have found a better option than exemption from the Roadless Rule. They’re working through a Shared Stewardship Pact with the U.S. Department of Agriculture. To be clear, Utah is still looking to get out of the Roadless Rule even though the state has signed a four-year, $20 million Shared Stewardship agreement with the U.S. Department of Agriculture. But for now, Utah officials seem satisfied with allowing their Shared Stewardship pact to play out.

“For now, our official stance is that the Roadless Rule petition has not been withdrawn and is still pending, but we are focusing on the Shared Stewardship agreement and not focusing on the roadless rule petition,” Utah Public Lands Policy Coordinating Office (PLPCO) lead counsel Jake Garfield said in late October.

The frozen petition would seek to expedite projects within the state’s five national forests. Utah officials say more road access is necessary to reduce fire hazards and they want to lift Roadless Rule protections on 3.5 million of the states 4 million roadless acres.

Utah’s petition was geared to address “urgent challenges, among them catastrophic wildfires, invasive species, drought, and epidemics of forest insects and disease,” but Garfield said the state is willing to see if the pact can resolve its fire-mitigation priorities.

The federal Roadless Area Conservation Rule was established in 2001 to protect more than 50 million acres across the country from development, logging, mining and grazing.

Alaska sued, challenging its implementation in the Tongass National Forest. The Forest Service temporarily exempted the Tongass in 2003 but court rulings overturned the exemption. The Supreme Court declined to hear the state’s appeal in 2016.

In April 2018, Alaska petitioned for a state-specific plan to exempt 9 million of the Tongass’s 16.7 million acres from the Roadless Rule. The Trump Administration is expected to approve the petition this fall.

Since Alaska filed its state-specific Roadless Rule petition, Utah in February 2019 joined Colorado and Idaho in submitting similar proposals. None have been approved.

Amid debate about state-specific exemptions to the Roadless Rule, Congress created the capacity to negotiate “stewardship contracts” ranging up to 20 years with states in the 2018 Consolidated Appropriations Act.

It allows the Forest Service to rely on “state’s guidance for designing, implementing, and prioritizing projects geared toward reducing the risks of damaging wildfires and promoting forest health.”

“What we’re talking about with shared stewardship is one plus one equals more than two working together,” USDA Secretary Sonny Perdue said in May when he and Gov. Gary Herbert signed Utah’s $20 million, four-year Shared Stewardship agreement.

The concept of “shared stewardship” is part of an “outcome-based investment strategy” touted by Vicki Christiansen in a strategy paper published two months before the former Washington and Arizona state forester was named Forest Service Chief in October 2018.

Utah was the second state to negotiate a Shared Stewardship agreement with the Forest Service, following Idaho’s December 2018 pact. The agency has since secured similar pacts with Arkansas, North Carolina, Colorado, Washington and Oregon. Montana is also seeking to negotiate such an agreement.

“Working side-by-side to identify the major risks and implement projects that are actually going to make a difference on the land is something conservationists, I think, can generally can support,” he said. “We think it is good.”

The agreements offer the flexibility to emphasize state’s priorities, Anderson said, noting Washington’s Fish & Wildlife Department is “a partner” in the state’s Shared Stewardship agreement with the Forest Service.

“We’re expecting that there will be more of a fish and wildlife emphasis” in Washington’s pact, he said.

Anderson’s only quibble is “so far, it’s been pretty much a bilateral sort of arrangement between the federal Forest Service and individual state forestry agencies. There is a desire among conservationists to have more of a role in the Shared Stewardship process. We want more part of the action out there.”

The Utah Shared Stewardship accord enables the state to “work collaboratively with the Forest Service to accomplish mutual goals” and “respond to growing challenges (after) years of drought, a warming climate, spreading beetle infestations that are killing trees and an historic legacy of fire suppression that has left many areas overgrown, choked with deadfall and primed for catastrophic wildfires.”

Under the agreement, the Forest Service and Utah will implement two planned “landscape-scale forest restoration” projects this year — the Upper Provo Watershed Restoration Project to “mechanically thin” 10,000 acres and prescribe-burn more than 6,000 acres in Uinta-Wasatch-Cache National Forest, and the Canyons project in Manti-La Sal National Forest to remove 30,000 acres of spruce through salvage timber sales.

“Through Shared Stewardship, the state and the Forest Service have an unprecedented opportunity to work together to set landscape-scale priorities, implement projects at the appropriate scale, co-manage risks, share resources, and learn from each other,” the agreement states, “while building long-term capacity to live with wildfire.”

Garfield said under the agreement, projects “can happen, and are occurring, within and without the roadless area, when necessary.”

The ultimate aim of the pact is simple, Garfield said: “Move projects forward.”

Utah’s petition to be exempt from the Roadless Rule, nevertheless, remains pending, as the USDA confirmed in July and Garfield reaffirmed in late October.

“We’re giving the (agreement) time” to work before deciding to push or pull it, he said.

PLPCO — established within the Utah Governor’s Office when state lawmakers approved a ‘Transfer of Public Lands Act and Related Study’ in 2012 — has created a website to explain the petition, which claims in some areas, the Roadless Rule has “prevented the Forest Service from using the tools they need to promote the healthy, resilient forests.”

The petition seeks to give foresters “more options to construct temporary or permanent administrative roads in some areas where necessary for active forest management or emergency access,” and proposes “a limited number” of Inventoried Roadless Areas “be managed for multiple-use as ‘general forest.’”

Read Next: The Forest Service Wants to Open 9.2 Million Roadless Acres to Potential Logging. Here’s Your Chance to Say Something About It

The Center for Biological Diversity said in a report that if granted, the petition would threaten nearly three-fourths of Utah’s most sensitive wildlife.

The Shared Stewardship agreements, however, provide opportunities to address those concerns — or not, Anderson said.

“There are certainly differences in how different states approach forest management so, undoubtedly, there are going to be some reasons why it works better or worse from the conservation standpoint depending on the state’s priorities and policies,” he said. “But, overall, we haven’t seen anything that is objectionable about Shared Stewardship as long as we continue to see scientifically sound restoration projects that include collaboration with the public and stakeholders.”

Garfield said PLPCO will be watching closely over the next four years to see if the Shared Stewardship agreement works out before withdrawing its petition.

“I won’t say everything we hoped to accomplish under a state-specific Roadless Rule will be achieved under the Shared Stewardship agreement,” he said, “but a lot of progress is being made.”