These custom calls might be worth thousands at auction. But we just think that they’re cool to look at 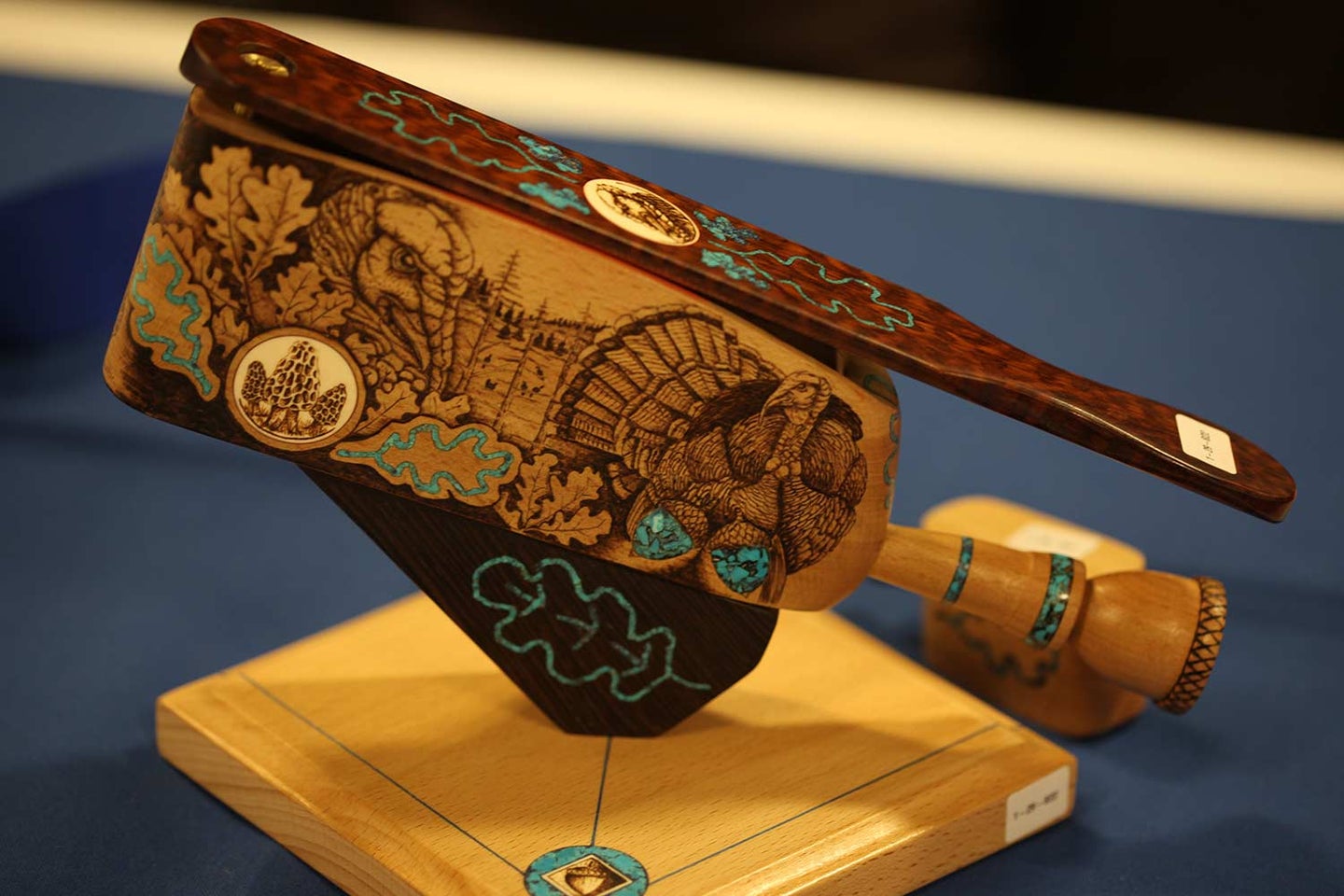 When Wisconsin National Wild Turkey Federation volunteer Charlie Burke was given the green light to stage a turkey call-carving contest to add more pizzazz to the 1993 NWTF national convention, it wasn’t an instant success. That first effort consisted of one division for carvers, and drew 19 callmakers. Each year since, custom-crafted calls worth thousands of dollars are put on temporary display during the National Wildlife Turkey Federation & Sport Show in Nashville.

The 27th annual Custom Call Competition involved more than 1,200 entries from 268 callmakers who competed in four divisions and 83 categories. At the end of the event, an auction of the category winners’ works of art garnered tens of thousands of dollars, indicating that turkey calls have become hot commodities as collectibles

We cherry-picked the list of winners to find some of the most spectacular examples of the callmakers’ craft. Following are a few examples. (There are a couple of waterfowl calls in the mix for duck hunters to brag about.)

Callmaking veterans Mike Lapp of Pennsylvania and Eric Rice of Minnesota teamed up to win the Collaborative Decorative Division with a colorful box call that any turkey hunter would be proud to have sitting on his mantel. Among the turquoise scrollwork and wrappings are inlays that depict morel mushrooms, oak leaves, and gobblers.

Without question, Timothy Oldham Jr., dominates the carving crowd in the world of decorative turkey callmaking. This year, his elaborate box call titled “Mother’s Love” won the Earl Mickel Call Maker of the Year Award for best of show. Oldham, a 46-year-old Hoosier from Newburgh, Ind., has taken home the award three years in a row and four times out of the past five years. Mother’s Love depicts a hen protectively spreading her wings over four poults – two on each side. The box call is housed in the hollow base under the carving.

“I don’t put ideas down on paper before I start carving,” says Oldham. “When I’m out in the woods I see something that makes me think and I make a blueprint in my mind that I stick to. I’ve also been able to be around a lot of great carvers who have their own style and that’s helped develop my talent. I put a lot of feeling in my pieces. It’s got to mean something more to me than just a carving.”

His latest work of art is carved with maple, hickory and – his favorite wood – tupelo gum. The prizewinner box call will go on permanent display in the Winchester Museum at the NWTF’s Wild Turkey Center in Edgefield, S.C. It will have other Oldham calls to keep it company.

A sharp knife and a chunk of cedar should lead to a good call, as this display suggests. East Tennessee callmaker Kevin Rouse won Best Overall Presentation winner for this collection. He used a block of cedar to suggest the carving art, and it sits beside one of Rouse’s cedar trumpet calls. The whittling knife has a gobbler legbone handle with the spur intact.

The callmaking contest isn’t restricted to turkey calls, and has drawn some of the best waterfowl callmakers in the land. Among them is Kevin DePeel of Michigan, whose exquisitely finished duck call fetched a show-high $4,000 at the auction that followed the contest. The winner’s call was made of walnut, maple and African blackwood with inlayed sterling silver scrolling and filigree highlights. Scrimshaw panels feature a flying mallard drake and hen on one side, and a retriever on the other.

The raw material for John Morton’s first-place winner in the Yelper category of the Amateur Division came from the lower leg and spur of a Merriam’s turkey that’s been wrapped with the skin from a canebrake rattlesnake. The stopper is a resurrected cork fishing bobber from the 1950s.

Okay, it’s not a turkey call, but we had to add this fake cheroot that Don Barden of Illinois entered in the Open Call division. It gets an “A” for originality. This cigar duck call even rests on its own carved ashtray.

You might expect a carpenter to craft elegant calls, which is what Bill Howard of Miamisburg, Ohio did when he came up with this box call. Though there’s nary a turkey in sight, the call features a variety of birds and other things a turkey hunter might encounter during a typical morning in the woods. Outfitted with a cedar lid and butternut box, Howard’s artwork mixes woodburning, relief carving and painting to good effect – he won first place in Decorative Box Call. Howard often adds cedar arrowheads to his creations that are made from leftover wood he used to build his father’s coffin in 2015.

Timothy Oldham Jr. won six awards in various decorative call divisions, including three firsts, and this elaborate striker is one of the latter. It depicts a chickadee sitting next to a pink dogwood flower, with a turkey feather mounted underneath. Oldham made the base from a piece of walnut driftwood he found on the banks of the Ohio River near his home.

9. The Morel of the Story

Many a turkey hunt turns into a mushroom hunt if luscious morels are sprouting up from the forest floor. Bill Howard acknowledged morel worshippers with this interpretation. The bad news is that he finished second in the Striker Division; the good news – sort of – is that he was runner-up to callmaking sensation Timothy Oldham Jr.

“If I have to finish second to somebody, it’s not so bad to finish second to Tim,” says Howard. The base of his Sryker was made of salvaged poplar from a house built in 1810 in Waynesville, Ohio. The oak leaf at the top and acorns here and there are fashioned from red and white cedar. The morels are carved from whitetail antler.

In the realm of call carvers, few can measure up to Jeremiah Cluesman of Bybee, Tenn. Cluesman finished runner-up to Oldham in Best of Class, and won a number of blue ribbons and runner-up awards this year to go with the many he’s collected in years past. This year, he won first place in carved Decorative Box Call. His unpainted rendition was carved from black cherry with an oak paddle and display stand. One side of the call shows a tom gobbling in a pasture with a barn, while the other depicts the three gobblers in the NWTF logo. On the paddle handle, a turkey foot is clutching a stone.

It doesn’t get any better than this, as Eric Rice went all out on this wingbone yelper. The three bones of the call came from a Nebraska Merriam’s and the 4 ounces of Arizona turquoise incorporated in it were gleaned from the famous Kingsman Mine. Rice carved the surface of the bone into interweaving patterns of a turkey head, dogwood blossom and morels, then crushed and inlaid the turquoise. Crushed lapis lazuli, a blue semi-precious stone, was intermingled with the turquoise for added color effect. The maple display base is velvet-covered and the birdseye maple pedestal between the call and the base holds a lanyard.

Here’s another example of Jeremiah Cluesman’s carving ability. Made of elk antler, the three-piece yelper was given a walnut stain wash after it was finished to make it look like a vintage call. The base was fashioned from walnut burl.

Maybe multi-award winner Kyle Osborne had north Georgia’s gold mines in mind when he crafted this first-place friction call. The Georgia callmaker used exotic Afezilia wood and gold inlay in the pot and an ocean jasper surface over a gold-plated glass soundboard. The striker is a snakewood dowel with an Afeliia burl top.

It might look like a plain ol’ corncob yelper, but there’s more to Ralph Permar’s “Harvest Trumpet” than meets the eye. The Pennsylvania callmaker made this yelper from 12 parts, including a stabilized corncob barrel, cocobolo bell with brass ring and a magnum cartridge ferrule connecting the mouthpiece to the barrel. Permar is known for his working calls, and as decorative as it is, the Harvest Trumpet incorporates all the tuned components that have made his hunting calls popular.

Andy Cobb of Harvest, Ala., pays homage to the barred owl, whose morning wakeup calls help hunters pinpoint answering gobblers. Cobb’s owl hooter sits inside “The King,” which was carved from a block of walnut. The owl has glass eyes and a mouthpiece made from deer antler, and is perched on a driftwood stump that’s attached to a walnut base.

This box call fabricated by one of the famous Turpin family of callmakers might not have won in the NWTF’s custom call contest on looks, but it’s a winner for its owner. George Denka Jr., who oversees the turkey call division of the antique call appraisal service, valued it at about $2,500. That’s not even close to a record. A few years ago a yelper made in the 19th century by Charles Jordan was accorded a value of between $75,000 and $100,000.