There's too much misinformation on the terminal performance of a bullet. It’s time to clear things up 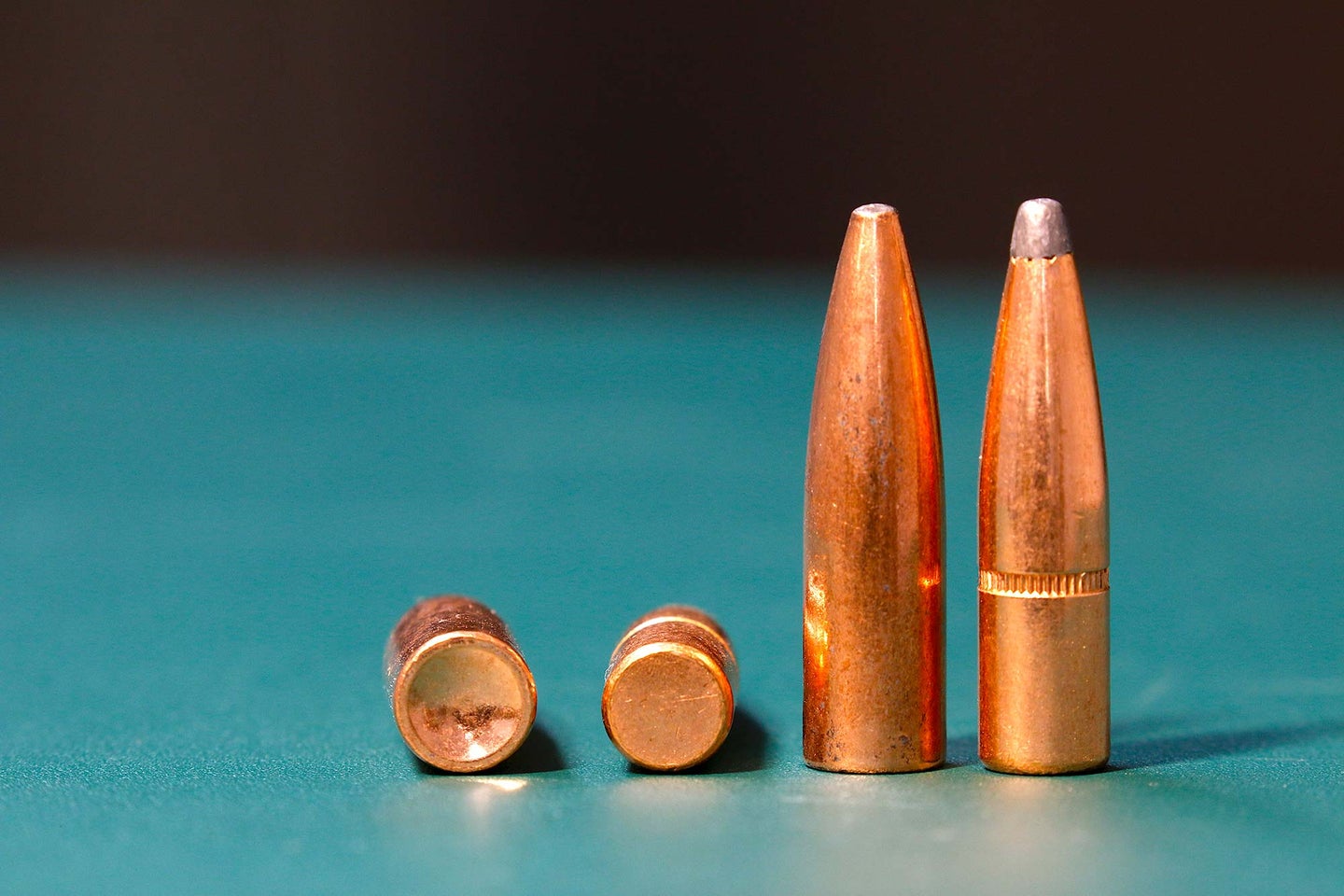 Bullet mass and muzzle velocity contribute mightily to terminal performance, but study these two slugs. Do you really think the slightly wider .308 on the left will do significantly more tissue damage due to that slim width advantage?. Spomer Photos
SHARE

Recently, I read an Outdoor Life reader’s comment insisting that the 7mm was a “deadly effective caliber.” And I think he actually meant the caliber, not a specific cartridge that holds 7mm (.284-inch diameter) bullets. In that case, I agree. Bullets .284 inches wide are deadly effective if they are constructed for the purpose at hand, given adequate velocity, and applied in the right place.

This will raise eyebrows because plenty of hunters lambaste all 7mms as ineffective, if not useless. “Doesn’t hit nearly as hard as a .308!” is one assessment I’ve often heard. “Shoots so fast the bullets don’t have time to open,” is another. “The bullets are just too narrow. I’ll take the bigger hole from a .308.” Hmmm.

The truth is some 7mms hit harder than some .308s. But it’s just as true that some .308s hit harder than some 7mms. Duh. It all depends on the muzzle velocity and bullet. Especially the bullet. Its mass, material, construction, launch speed, and form factor combine to determine its terminal performance on game. There is nothing special about the 7mm caliber to make it any more or less effective than the 7.62mm (.308 bullets) or 6.5mm (.264 bullets.)

Caliber performance, alas, is as misunderstood as is the word “caliber” itself. Caliber means the diameter of the bore and bullet in inches or millimeters. The .30/30 Win., .308 Win., and .30-06 Springfield are not calibers. They are cartridges that shoot .30-caliber bullets. The 7×57 Mauser, 7mm-08 Remington, .280 Remington, 7mm Remington Magnum, and 28 Nosler are cartridges that shoot .28-caliber bullets. There is nothing magical or even special about calibers, although some cartridges — with the right bullets — can be pretty special for many reasons.

At the risk of redundancy, let me reiterate: A specific caliber is not inherently more accurate, deadly, or more efficient than another. It does not necessarily hit harder, fly farther, or drift less in the wind. Nevertheless, as much by tradition and parroting as anything else, many of us have come to accept that certain calibers are deadlier than others. So let’s take a closer look at our assumptions, using the 7mm and .308 for comparison.

Read Next: The 8 Best Hunting Guns that Double as Self-Defense Firearms

The .30-caliber is widely regarded in the U.S. as quite deadly for most big game hunting. And by and large it has been. The 7mm is perhaps slightly more revered in Europe. That, after all, is where the 7x57mm Mauser started it all. Often thought of as ballistically fast and efficient, .284 bullets of the right weight and shape do drop and drift less than .308 bullets of the same weight and shape simply because they are narrower. This decreases their drag and conserves their downrange energy. A 165-grain .284 bullet of the same shape and construction as a 165-grain .308 bullet pushed to the same muzzle velocity (MV) will shoot flatter, drift less in crosswinds, and retain more energy at all distances. Why, then, would we assume that the .308 kills better?

The usual answer to this inquiry is diameter. The wider .308 bullet makes a bigger hole! OK. Let’s compare these holes. The diameter difference between .308 inches and .284 inches is 0.024 inches. Uh, let’s see… that’s one-quarter of one tenth of an inch. If you prefer cross-sectional area, the .308 has 16 percent more. (0.0745 sq. in. vs. 0.0633 sq. in.) That’s not insignificant, but against the surface area of an elk, deer, or even coyote, I’m having trouble seeing how this is going to make a significant difference, especially when you consider the bullet’s expansion, tearing, break-up, and tumbling in game. Were we discussing solid bullets, larger diameter would start to matter, but even then, a 0.024-inch wider one? That’s not much of an advantage.

A Penetrating Look at an Expanding Issue

But we don’t hunt big game with solid bullets. What happens when our same-weight 7mm and .308 bullets expand? Will not the larger frontal area of the .308 contribute to a significantly larger mushroom? And will that not transfer more energy and rip more tissue? Well, maybe. Let’s assume both bullets penetrate in a straight line and expand to the same degree, both increasing by 50 percent, doubling nose diameter, which is a lot for most bullets. The .308 multiplied by two would become .616 inches. The .284 doubled would be .568 inches. That’s a .048-inch difference. Will this be enough to matter? Perhaps, but once any bullet begins to mushroom, its terminal shape can become so rearranged as to make initial diameter an afterthought. Can 180 grains of mangled metal really be significantly more deadly if its original diameter was .308 inches rather than .284 inches?

There is also the issue of penetration. Because the .284 bullet carries more mass (shank) behind its expanded nose as well as more energy, it should penetrate farther or expand wider, potentially reaching and damaging more vital tissue.

The problem with all this conjecture is that we have no way of proving it. Qualifying terminal bullet performance on game animals is not and cannot be a scientifically controlled experiment. Two 250-pound, 4-year-old whitetails standing broadside and hit in exactly the same place are not going to react exactly the same. One could be worn out from a night of carousing. One could be inhaling, the other exhaling. One could be high on adrenaline, the other half asleep.

Read Next: The Best Deer Guns

The “it Hits Harder” Defense

Another argument made in support of the .308 over the .284 is the “hits harder” defense. Well, yes if you compare a 7mm-08 Rem. against a .300 Win. Mag. But that’s a result of the .300s much faster MV. Stack the 7mm-08 up against the .308 Winchester and you have a more reasonable comparison (same powder supply, and close MVs). And if you shoot the same bullet weights and shapes in each, the 7mm-08 actually ends up delivering more energy at extended ranges because of its higher B.C. If you believe energy is a significant contributor to killing efficiency, you’d have to throw your support behind the 7mm.

Now, we’re running out of comparisons. If the bullets’ tissue-tearing characteristics are similar and the .284 actually carries slightly more energy, how can the .308 hit harder and kill faster?

Other Claims Against 7mm

Another anti-7mm argument I often hear is that the 7mm Rem. Mag. is an ineffective big game round because “it’s too fast.” The complaint is that the bullets zip through game so quickly that they don’t have time to “open up.” The .300 Winchester Magnum is then held up as a much better option. The problem with this position is that the .300 is FASTER than the 7mm. The .300 will drive a 175-grain bullet 3,150 fps or so, the 7mm Rem. Mag. will only push it to 2,960 fps.

The other fallacy in this “too-fast” argument is that bullets need time to open up, i.e. expand. Tell this to a prairie dog smacked by a .220 Swift at 3,800 fps. Astute cartridge connoisseurs will point out the Swift bullet was likely a thinly jacketed, soft-core varmint pill engineered to expand instantly, and that’s exactly the point. At the MVs of the 7mm Rem. Mag., .300 Win. Mag. or any cartridge, you must match bullet construction to velocity and the game you hope to shoot. The perfect 150-grain whitetail bullet for the .30-378 Wby. Mag. at 3,450 fps isn’t perfect for the .30/30 Win. at 2,200 fps. And vice versa. Poor terminal performance from any cartridge is really poor bullet performance. If a bullet fails to open in game, it was poorly matched to its impact velocity. A full-metal jacket bullet from a 7×57 Mauser isn’t going to open any more than from a 7mm Rem. Mag. or 28 Nosler.

One of the more famous incidents related to this was Robert Ruark’s condemnation of the .220 Swift in his book Use Enough Gun. Ruark, then new to Africa hunting, used his Winchester M70 in .220 Swift to shoot a “going-away” warthog in the rump and losing it. Soon thereafter, he hit a hyena with the .220 Swift nine times before finishing it with a .470 Nitro Express. He and his PH, Harry Selby, condemned the .220 Swift without describing the bullet, which was most likely Winchester’s rather frangible 48-grain varmint bullet.

In contrast, a ranger tasked with eliminating invasive burros at Grand Canyon National Park in the mid-20th century had extensive experience with a variety of cartridges and discovered the .220 Swift routinely killed those big, 400- to 600-pound feral burros faster and surer than did the .30-40 Krag, .30-06, and 8mm Mauser. The ranger used 50-grain Ackley Controlled Expansion bullets, solid copper with 10-grains of soft lead in the hollow nose cavity to initiate expansion. I cannot corroborate his report, but since his job was to exterminate feral burros to protect the native plants and animals of the Canyon, one assumes he chose the best tools with which to do it. (Read it in Vol. 1 Handbook for Shooters & Reloaders, by P.O. Ackley.)

Does this mean a fast .224 will be just as effective, just as deadly as a .300 Remington Ultra Magnum? Common sense suggests no. More energy and more projectile surface area should equate to more tissue destruction. But decades and decades of anecdotal evidence cannot be ignored, either. Much of what we hear and read about cartridge performance is conjecture, misinformation, myth, hearsay, and sometimes hogwash. You, your uncle, grandma, or favorite outfitter may have seen every elk hit by every 7mm bullet run off as if stung by a Daisy BB gun, but that doesn’t make all or even any 7mm cartridge ineffective or useless. Anecdotal evidence isn’t accepted as proof because — its anecdotal. What was the cartridge? What was the impact velocity? What was the bullet? What was the animal doing when hit? Where exactly did the bullet land?

Regardless, the provable performance of any caliber or even cartridge, if a hunter believes the one he is using is ideal, he’ll likely shoot it well and with confidence. And this may be the most important point of all. When you find a cartridge, bullet, and rifle that work well for you, a combination that you shoot well and love to carry, embrace it. Don’t fall into the trap of suspecting there is a significantly superior rifle or cartridge out there.