Why Post-Rut Is the New Best Time to Hunt Whitetails

Forget the rut. Here are five ways to fill your tag late in the season, after the crowds have left the woods 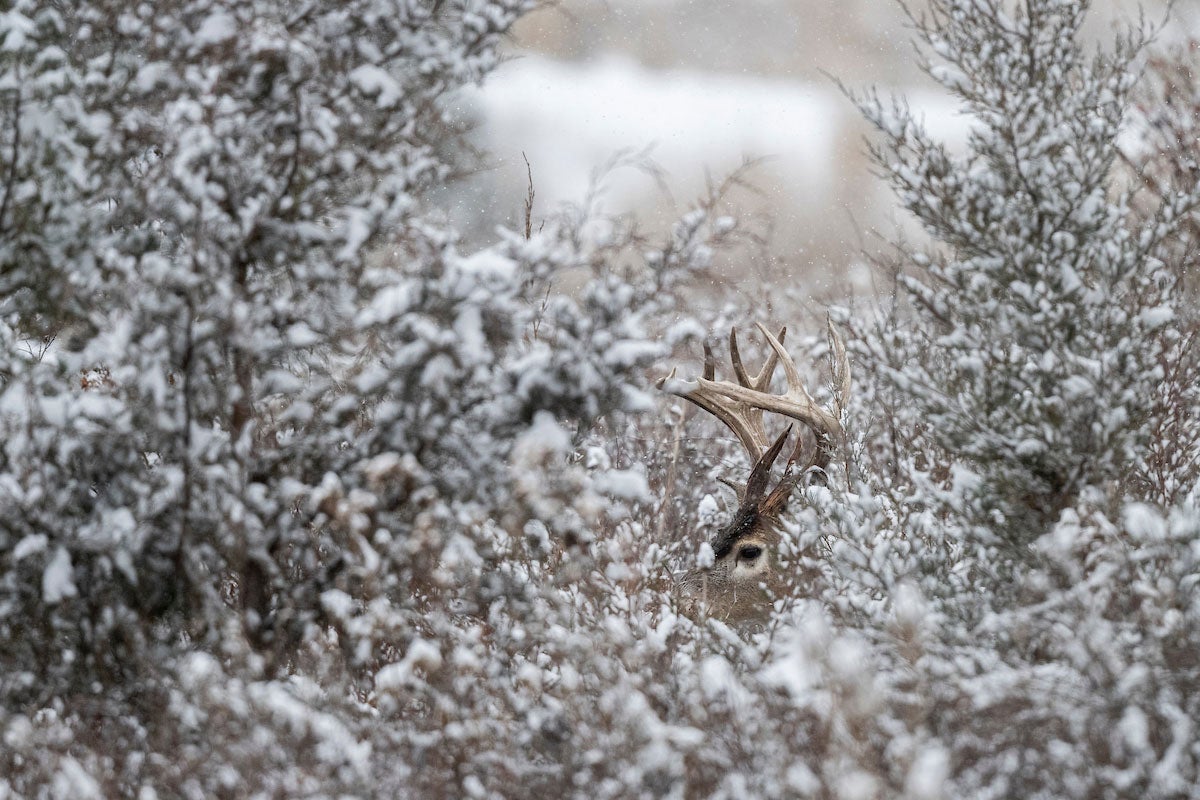 A few years ago in North Dakota, the entire month of November was warm, with hardly any snow. “Needless to say, the rut was tough,” says resident bowhunter Derek Plautz.

Plautz hunted hard for weeks without seeing a shooter buck. But in early December, the weather cooled down, snow flew, and the deer started moving. With two days left in the season, Plautz checked his trail camera. Finally, a big 10-point.

He didn’t have a tree stand in the area, so he built a little brush blind behind a fallen tree and climbed in for the evening hunt. Deer started moving and soon here came Big Ten, bronze antlers glinting in the fading light. When the buck crossed at 30 yards, Derek let fly. The deer kicked like a mule and ran, but it didn’t go far.

“What a great way to end a weird season,” Derek says. “I got to hunt for weeks and then cap it off with a big buck at the very end!”

A hunt like Derek’s is becoming the norm rather than the exception across North America. My observation and theory: As temperatures have gotten warmer in late October and November, deer patterns are gradually changing. While does and bucks still breed in mid-November as they always have, they tend to move less in daylight and more during cooler nights.

In December, it starts to cool down for longer stretches at a time—for days or weeks—and deer start moving with more vigor. Bucks are still rutty, prowling, and looking for the last receptive does of the year.

Each year I hunt in several states in early to mid-December, from Kansas to Oklahoma to Virginia. I am witnessing good to great deer movement, and more late rutting activity than ever before. Such good activity, in fact, that the early post-rut is becoming my most productive time to hunt.

One of the country’s top whitetail hunters agrees. “The weeks following the rut are my favorite time without a doubt,” says Midwestern hunter and Outdoor Channel personality Mark Drury. “I see more mature bucks in the post-rut period beginning in early December than at any other time of year. Big bucks are on the hunt for food and the last does.” Here are some ways to capitalize.

Your strategy from early December through the end of the season should center around the limited food sources that remain for deer. Both does and bucks are run down from the primary rut, and they have to eat. The colder (and snowier) it is in December, the harder deer move to and from the feed, and the more visible they will be in daylight.

You’ll see the most animals if you have access to corn and soybeans, or alfalfa in the West. A patch of standing corn is especially good, as it provides both eats and cover for deer.

In a harvested bean field, scout edges and corners where a few strips of standing beans were missed by harvest. Those will be a magnet for deer. One chilly December evening, I killed one of my biggest Iowa bucks, a 150-inch 10-point, by finding a few leftover beans and taking a ground setup nearby.

The less gun pressure in and around a field during the hunting season, the more bucks you will see active in daylight. Pray for snow and temps from the teens to mid-30s. A hungry buck might pop out into the crops morning or afternoon, or even briefly in the middle of the day. Bundle up and be out there till the end.

If you hunt big woods, public or private, miles from the nearest crops, you won’t see nearly as many deer, none some days. To have a chance of punching your buck tag you must find and watch what little food/cover mix is left for a buck: greenery on the edge of a clear-cut or power line, second-growth oak flat near a cedar swamp (maybe a few last nuts and green vines and leaves), grape or honeysuckle thicket…you get the picture. Set a stand or make a blind on the fringe of a pine, cedar, or honeysuckle thicket. Bucks love to travel a green edge in the woods.

A great bonus now is that most of the rut hunters who crowded the woods in November are long gone. A few of them got their bucks; others have lost interest or had to go back to work. Whatever, the reason, there’s less competition. Hunt Monday through Thursday and you’ll have the woods to yourself most days. Bucks move best on days when there’s less pressure, so you’re in great shape.

In early December, bucks are tired and battered but still running on a last jolt of testosterone. Sometimes a buck makes fresh rubs, so look for them. While bucks generally don’t paw scrapes this late, they often cruise back through creek bottoms and draws where they scraped and rubbed trees a month ago, and hooked up with does. Go back and hunt a stand that you hung in a sign-blazed funnel in early November, you might catch a buck cruising there now.

One cold, still morning in early December, we hiked down into a canyon near the Cimarron River in western Oklahoma and set up on a rocky outcropping. As pink dawn was breaking, my friend Kenny hissed, “Buck in the river.”

I peeked at the deer, an old fellow with a bull chest, thin hips, and a gray face. I hadn’t looked at his rack, but I knew he was a shooter, at least 5 ½ years old.

“Eight pointer, gnarly,” Kenny said while checking him out with his binocular. “He’ll be on our side of the river in a few steps.”

The buck stepped out of the misty river and disappeared into thick brush. He popped out 250 yards away, and I was fixing to try a poke…

I peeked over at Kenny, who worked his horns and grunter with a gleam in his eye.

The buck turned our way and marched in, back hair bristling and face a white halo in the morning sun. My 140-grain bullet drove him into the sandbar, and he never moved again.

“The first weeks of the post-rut, when old bucks cruise for the last hot does, are a good time to keep rattling,” says Hellickson. This was the phase when the researchers rattled up the most mature bucks. Of the 29 bucks that responded to their 51 post-rut rattling sequences in the study, 10 were 5 ½ years old or more, and another 10 were 3 ½ to 4 ½.

Don’t give up on rattling too soon. Here are a few things to keep in mind:

One December day in Kansas, B.J. Clement bowhunted from a ground blind in an old abandoned farmyard where he’d found lots of rubs and scrapes in late October. He saw some young bucks and does, but nothing he wanted to shoot.

To help his Dad out, his son Todd sneaked into the farmyard the next day and stunk up the joint. “I made several mock scrapes, and laid scent trails all through the area with both doe and dominant buck urine,” Todd says.

A few days later, Todd returned and freshened the scrapes and trails.

On the way to his blind the next day, B.J. found the yard torn up with big rubs and fresh scrapes.

Around 4 p.m., B.J. spotted a big rack. The buck marched into the farmyard and thrashed a tree. As the deer worked closer, Clement drew his bow when he could and fired a lethal arrow. The rack scored 181 inches.

You’ve already read here that in early December adult does that didn’t conceive the first time around cycle into a second estrus. As a bonus, in an agricultural state like Kansas or Iowa where there is good year-round nutrition for deer, a few 7-month-old doe fawns might pop into heat for the first time later on in the month. Whatever the case, these sweet-smelling does can and will draw in bucks.

Back in early November, you probably tried scent lures. But sometimes scent works better the first two weeks of the post-rut. Think about it. During the peak rut, a lot of estrus does mist the woods, and bucks had lots of choices. But now, with only a few estrous does left, the sweet scent of one can bring a buck running to you on a string.

Where legal, lay a doe-in-heat trail into your stand or blind each day. Try doctoring old scrapes with both estrus and tarsal as a challenge to other bucks. Stink up the December woods. The bucks are still out there and moving, and you might get one yet.