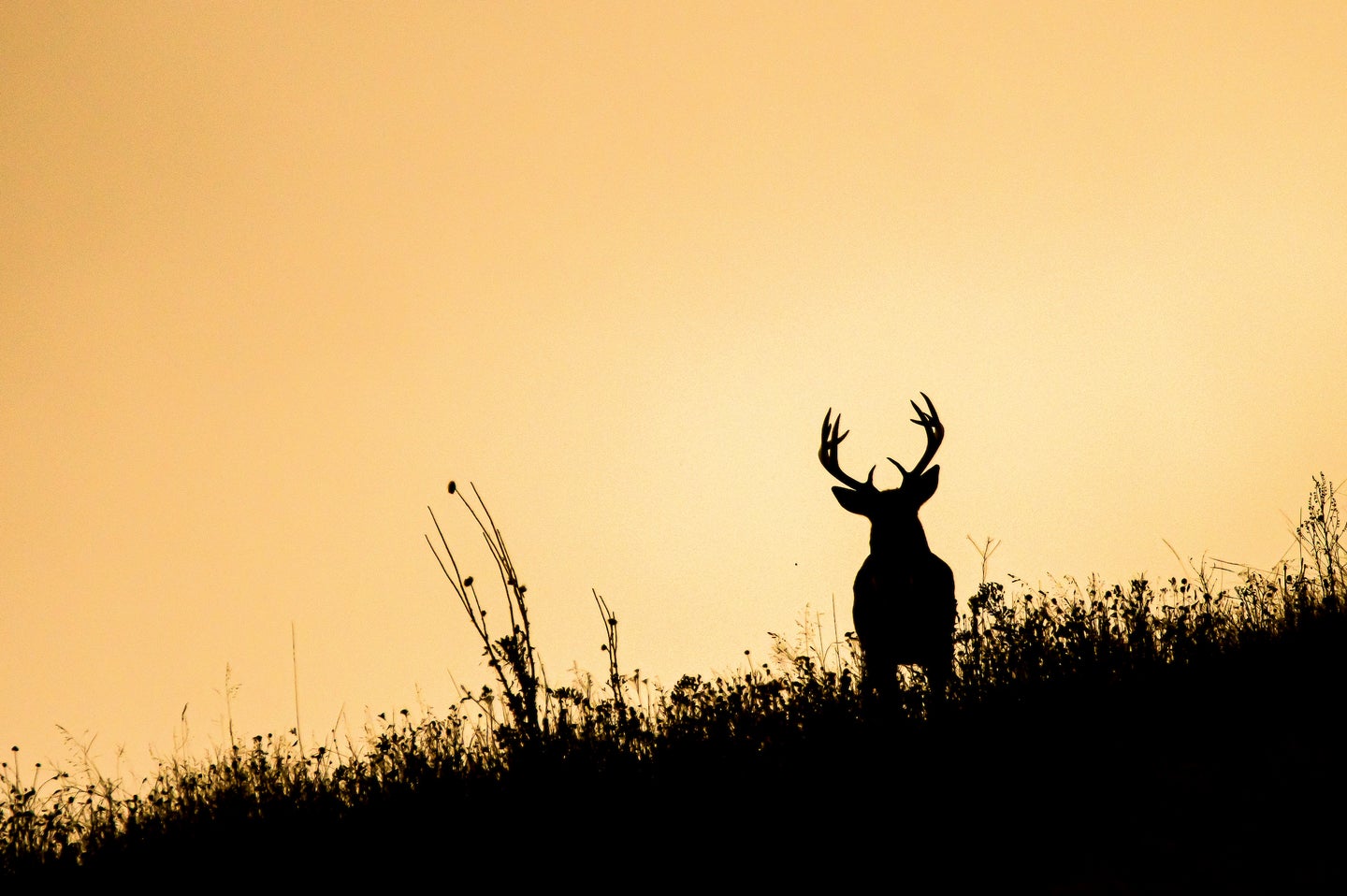 Halloween week is upon us. Make sure you spend it deer hunting. John Hafner
SHARE

If I had only one week to deer hunt, I’d pick seven days around Halloween. Over the last three years of hunting and running trail cameras on the same farm in western Wisconsin, I’ve noticed a clear increase in bucks moving during daylight hours around Halloween. Two years ago, I killed our biggest buck on the place on Oct. 24. Last year, the neighbor killed one of the bigger bucks in the area on Oct. 22.

It seems like mature bucks start getting agitated with each other during this timeframe. Plus, if a doe comes into estrus early, things can get wild—like half a dozen bucks chasing the same doe around in circles. I have seen plenty of chasing in mid-November, but it doesn’t seem to be quite as frenetic. It also seems like everyone is hunting hard by mid-November. As we learn more and more about how deer react to hunting pressure, we know there’s real value in hunting when and where there’s less pressure. Mature bucks, even rutting ones, adapt to avoid hunters. This, after all, is why they’ve grown to maturity.

I’ll admit that my faith in Halloween week is based on anecdotal evidence and a bit of superstition, too. But hey, I’m not alone. Below we’ve got deer hunting experts from all across whitetail country giving their best tips, tactics, and advice for hunting Halloween week. Their advice falls into three general categories: 1) using scents, calls, and decoys; 2) hunting scrapes; 3) hunting aggressively. I think I like this last thread of advice the best: Just get out there, because the deer hunting can be scary good.

Use Scents, Calls, and Decoys

Make sure to have calls with you on every hunt and don’t be afraid to try a decoy! Bucks are really starting to get itchy and aggressive towards one another. They’re frequenting scrapes and will be on the move. If you see one out of range, this can be a great time to utilize calling, whether it be grunting, rattling, or even a decoy, to bring him in close.” — Michael Hunsucker, Heartland Bowhunter, Kansas/Missouri

Halloween kicks off the “hard” pre-rut period, when the most aggressive mature bucks go on the prowl, spoiling for a fight or the opportunity to breed one of the first receptive does. It’s a great time to try this trick: Slip into an area where thick rubs and dank scrapes tell you a big deer is working. Hang a bow stand and set 3 scent wicks around it, about 6 feet off the grounds so the wind carries and swirls the scent. Juice one wick with doe estrus and the other 2 with rank-smelling tarsal scent. A mature buck might think he smells an intruder hanging with a hot doe and roll in for a look. —Mike Hanback, Bigdeerblog.com, resides in Virginia but hunts U.S. and Canada

Hunt scrapes in and around food that has lots of does in the area. Prioritize spots with good access and a solid wind. Stay out until then. Early season doe holes turn into gold this week. Pay attention to doe pics now. —Mark Drury, Drury Outdoors, Missouri/Iowa

Bucks are starting to be more active during legal shooting hours and their overall activity level is increasing as a few does come into heat early. Older bucks are starting to lay down scrapes, revealing good locations to ambush them. Key in a scrapes that are in or near heavy cover (like along swamp edges) because that’s where you are most likely to see bucks during daylight. I’ve killed several bucks on or near Halloween. I’ve also interviewed three Michigan hunters who killed Boone & Crockett bucks on Halloween and the stories behind those hunts are in my series of books Great MI Deer Tales. Interestingly, only one of those three bucks was killed by a hunter in a stand. One hunter successfully stalked a booner that was bedded. The third hunter snuck from his stand in the woods, where light had faded, to the edge of an agricultural field, where there was still plenty of light, and he spotted the buck. Most hunters won’t have a chance at a buck with a huge rack the week of Halloween, but who cares, they have an excellent chance of filling a tag with a legal buck. —Richard P. Smith, Michigan

Hunt scrape lines. This is the most useful time to sit over a good scrape. From about October 28 to Nov 2nd I’m hunting scrapes. —Brad Harris, Missouri/Kansas

Target food sources in thicker areas such as apple trees close to bedding areas. They feel the rut coming and are conserving energy. The closer the food, the better. If you know of a spot that typically has a scrape every year, and there’s not one there yet this season, hunt that area as it will be there soon.” —Ernie Calendrelli, New York

This is probably your best last chance hunting on or near scrapes. Once does start coming into estrus, bucks will be less active around them. Rather than right over them, set up some distance back on the downwind side. Bucks are more likely to scent-check a scrape rather than tend it during daylight hours. —Bob Humphrey, Maine

Get Aggressive and Hunt Hard

Don’t hesitate to change locations if things are slow in late October. For most of the United States with a November rut peak, activity is heating up, but there’s also a lot of shifting in deer behavior going on. Food source preferences are changing right now, so if you’re hunting near good deer food and not seeing anything, you are not hunting the highest preference deer food right now. Make a move. Buck movement is climbing weekly toward the rut peak, so if you’re not seeing deer, it’s not the deer’s fault. It’s not the weather or the moon’s fault. You are in the wrong place at the wrong time. Make a move. Finally, early pressure often explains invisible deer. If you don’t know where to go, make your move to a place no one else has been hunting yet. —Lindsay Thomas Jr., National Deer Association, Georgia

Spend as much time in the woods as you can. The rut is kicking in and deer can move all day then. This is the only week I’ll sit all day. —Paul Butski, New York/Missouri

I think the famous phrase “the first time you sit a stand is the best time you’ll ever sit a stand” can be very true when it comes to Halloween week. This week usually coincides with one of the first major weather systems making its way across the Midwest. That very first barometer spike partnered with the moon phase and the date on the calendar, gets big bucks on their feet — they’re genetically wired to do so. Personally, I think this is the most important time to take the best MRI (most recent information) you have via an aggressive trail camera grid effort to figure out exactly where that big buck is bedded and where he’s exiting the bedding area. Those two pieces of information are the most important to me because I want to know what funnels, pinch points, and field edges are closest to his bedding area. Even though I may not have him in daylight on a trail camera, I know that he’s going to make a move with the very first barometer spike near that Halloween mark. I’d hunt the path that he takes to exit his bedding area without completely stepping out in the open. This could be well used trails, rub lines, scrapes or other just an area that bucks historically use. Wordsmanship pays off here because mature bucks generally don’t just stroll out in to the open. This week is the first time that many bucks will travel during daylight. Their behavior still might be passive, but they’re more likely to start asserting dominance now. I also think that these bucks will almost always work with the wind in their face or quartering to them. This can make it tough to find the perfect tree. I always take my Scent Crusher gear and Ozonics because sometimes I’ll have to hunt setups that are very aggressive, knowing I might be able to get away with 5 to 10 seconds of tolerance even if the wind isn’t right. — Drew Palmer, Mile North Hunts, Kansas

I love hunting Halloween week and specifically Halloween day. I once had a 5-year streak of seeing one of my target bucks on Halloween, and often it was the first time I laid eyes on them. My best advice is to stay on stand longer than you probably have been in the weeks leading up to Halloween. I don’t leave my stand until at least 11 a.m. on morning sits and I’m back out there by 1 p.m. for the evening. Bucks are really getting the itch to move during this week after spending so much time on their bellies, and their testosterone levels are at their annual high. Hunt known doe travel corridors, get the wind in your face, and treat every twig snap like it’s the buck of a lifetime coming your way. It just might be. —Nick Pinnizzoto, National Deer Association, Pennsylvania