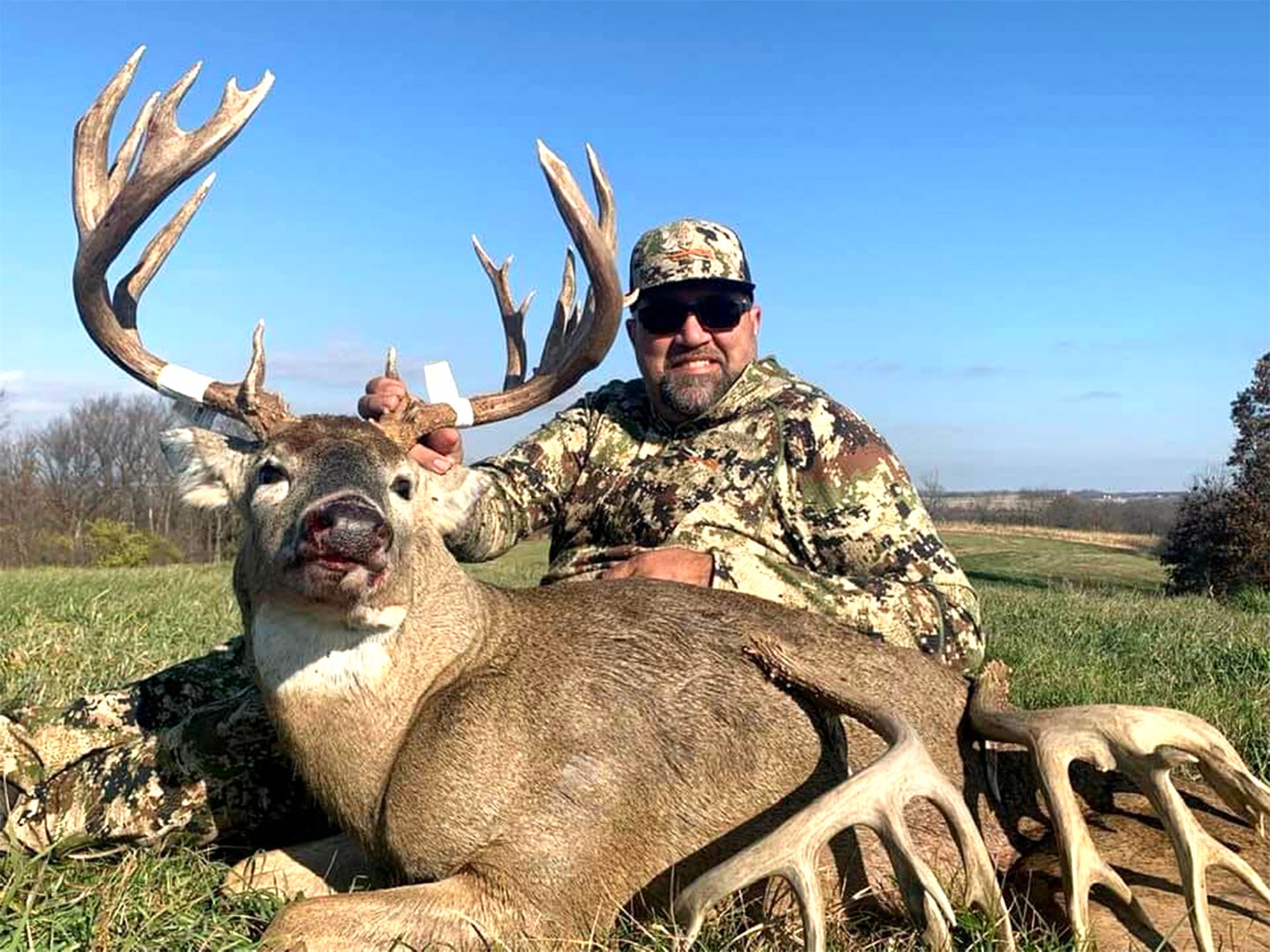 It’s not easy to pass on a Booner buck year after year, but that’s exactly what Iowa bowhunter Bruce Severson did to tag the biggest whitetail of his life last Tuesday. After sending up a prayer (or two), Severson finally put an arrow through the giant 24-point buck, which had a green score of 207 and 5/8 inches.

Severson tells Outdoor Life that he first noticed the buck four years ago on a piece of private land that he regularly hunts in southeast Iowa. The deer was already carrying around at least 170 inches of antler at the time, but he looked so young that Severson nicknamed him “Baby Boy” right away. He sent trail camera photos of the buck to his friend Don Higgins, who told him he should hold off for at least a year or two.

“He goes, ‘Oh Bruce, you gotta let that deer go a couple years. If you can’t stop yourself from shooting him, you shouldn’t even hunt that area,’” says Severson, who took Higgins’ advice without questioning it. The buck would show himself again and again over the next two seasons, but Severson refused to hunt him. The property became a sanctuary of sorts—until last season, when he decided he couldn’t wait any longer.

The buck was approaching the 190-class by that point. After two close calls with his bow, Severson almost got a shot during the last day of muzzleloader season. In the end, Severson had to watch Baby Boy fight with another buck just out of range as darkness fell and time ran out.

Like clockwork, Severson says the buck showed back up on the property sometime in mid- to late-October this year. He got at least 200 trail cam photos of the deer over the next few weeks, but only at night. Still, Severson had made up his mind that he’d hunt the buck as hard as he could, and last week on Nov. 8, he walked out to the treestand he’d hung near a scrape in the hardwoods. While on his way to the stand, he stopped for a moment to pray.

“I said a very selfish prayer to God that if he’d give me an opportunity, I sure would appreciate it, and I gave thanks for allowing me to hunt such an animal,” Severson says. “And I no more got done with that prayer and came up over the hill when I saw that deer out in the open about 125 yards from me.”

Read Next: Where to Hunt Deer in the Big Woods

Severson dropped to the ground, ditched his pack, and crept within 60 yards of the deer. He tried grunting repeatedly, but the buck wouldn’t bite and quickly disappeared. So Severson grabbed his gear, ran over to the patch of hardwoods, and climbed into the treestand. Then he took his rattling horns and rattled as hard as he possibly could. A doe stepped out, and soon enough Baby Boy came into view about 45 yards away. The doe walked right by Severson’s stand, but the buck wouldn’t work any closer.

After 15 to 20 minutes of this, the buck stepped into an opening, and Severson was staring at the buck through a shooting lane the size of a basketball. By that point, he was a nervous wreck, so he closed his eyes and prayed again.

“By the time that deer walked through, I asked God for his grace, and I was so relaxed,” Severson says. “I anchored my pin and prayed let my arrow be true, and I’ve never had an arrow fly as true as it did right then. It buried up to the fletching just behind his front shoulder.”

Severson waited as he heard the buck crash into a nearby fence, and then he called a friend to help track the deer. They saw blood with bubbles right away and found the arrow near a bloodied fencepost. Looking up at the top of the bluff on the other side of the fence, they saw the buck piled up in the grass, roughly 80 yards away from where he was hit.

“In the last four years I’ve gotten three other Booners under my belt, but this is by far the biggest,” Severson says. “I just gotta give the glory to God on this one. God helped calm my nerves, and when I drew back, I was at peace.”