How to Super-Tune Your Arrows for Better Hunting Accuracy 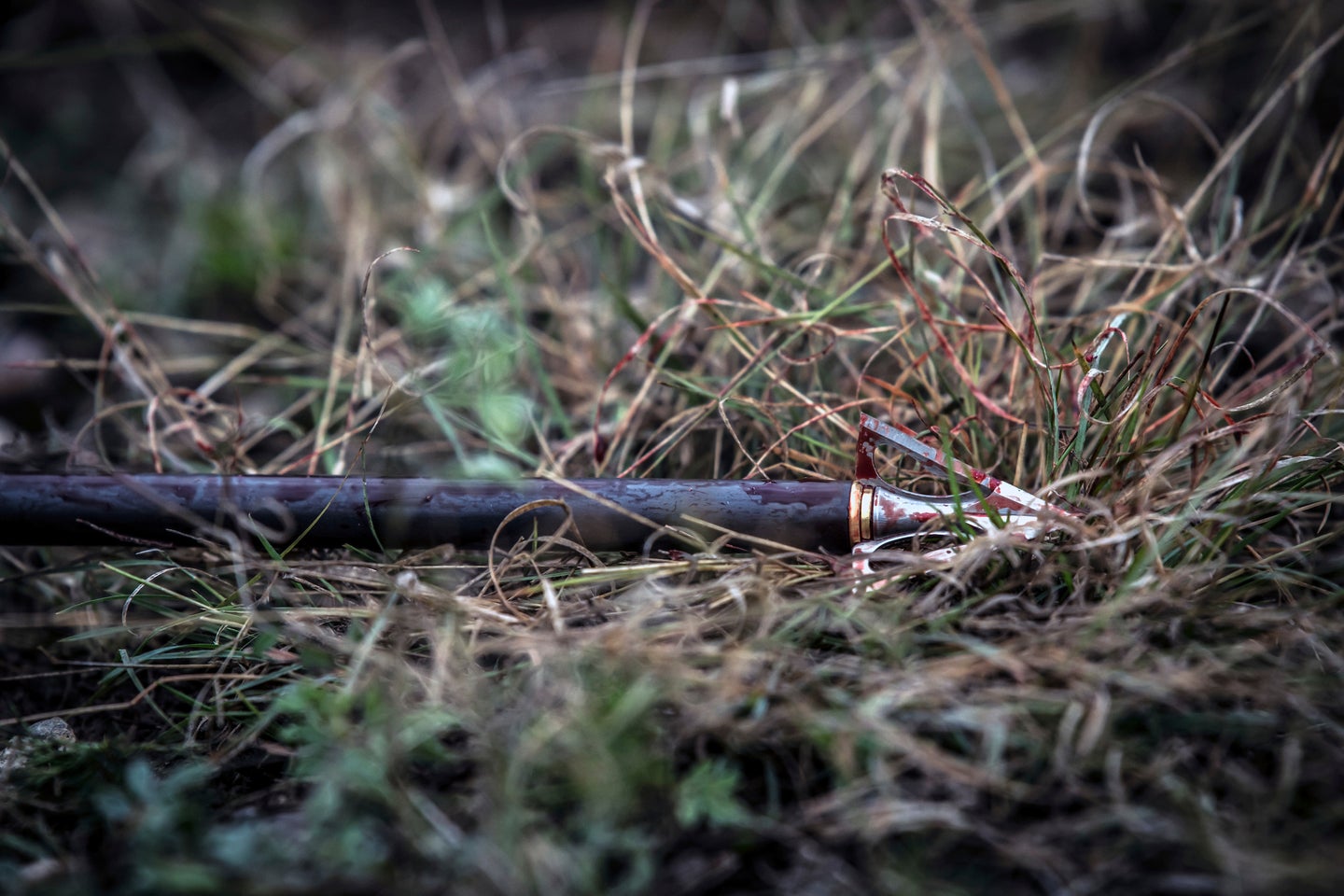 Tuning your arrows during the pre-season will help you make every shot count this fall. John Hafner
SHARE

Once the year’s serious bow shooting practice has started, it doesn’t take most bowhunters long to find the “cherry” arrows in their fresh new dozen or half dozen. Many of us take the time to number our arrows for just this reason; to find, after a few carefully shot rounds, the best-shooting, most-accurate in our latest bunch. Eventually, these lucky shafts are the few that, come fall, will be first out of the quiver. When they fly, we know that game, very likely, will die.

But wouldn’t it be great if all of our arrows shot as dependably consistent as our carefully vetted favorites? They can, with some time and effort. Each and every one of our arrows can be just as accurate as the next, and bowhunter Mark Beck is on a mission to help others understand the how’s and why’s of this. To achieve such accuracy, Beck is a big proponent of what he calls super tuning and nock tuning, two techniques he says are both underutilized and widely misunderstood—not only by bowhunters, but also by many archery shop owners and other retailers.

Man on a Mission

Beck, 45, is the retail sales manager for Synergy/Bloodsport arrows, a job that requires the longtime competitive archer to fly around the country and educate archery retailers on the specific benefits of Bloodsport carbon arrows. He also covers how to ensure customers are getting the most from their arrows, regardless of which brand they’re buying.

“Arrow tuning is basically nock tuning after your bow setup is tuned,” Beck says. “A lot of guys are buying their arrows from Walmart or another big box store, and so they might come home with three, six, or a dozen new arrows. And when they shoot them and they don’t group, they kind of blame themselves rather than their setups. They just assume because they spent x number of dollars on a certain name-brand arrow that it’s going to hit where they’re aiming, but it’s simply not the case.”

The first step, Beck says, is buying the right arrows for your bow. Assuming you’re shooting a bow set at your correct draw length, begin by ensuring the arrow spine matches the tip you want to shoot (typically 100 or 125 grains), and your specific bow poundage. If on a recommended arrow chart your setup lies somewhat between arrow models, it’s wise to lean to the stiffer model.

“You can tune a shaft that’s a little stiffer, but it’s very hard to go the other way,” Beck says. “Usually the weaker the arrow, the less stable it is in flight, and the longer it takes to recover from archer’s paradox after it leaves the bow. With an arrow that’s the correct spine, and with the correct broadhead or point, you’re starting to create a projectile truly matched to the energy that’s coming off that bow.

“What I normally advise people to do, after they get their new arrows, is start the super-tuning process. I’ve also heard it referred to as ‘micro-tuning,’ or ‘walk-back’ tuning,” Beck says.

irst, Beck advises you to pick your favorite arrow—one that seems to fly best likely has its “spine line” (all arrows have one, more on this later) in the correct location as it relates to both its nock and fletching orientation. This is the one and only arrow you will use throughout the tuning process.

Next, attach a large, square piece of blank cardboard (2×2 feet) to your target butt and run a length of 1-inch painter’s tape vertically, right down the center. Also, be sure you have handy tools to adjust your sight and rest. You will need them—a lot.

Now, using your favorite arrow, sight-in at 10 yards, attempting to skewer the thin vertical line near the top of your makeshift cardboard target. Be sure not to rush your shots, and be honest about your accuracy. Do not count bad or poorly executed shots. Once you’re confident you can hit (or come seriously close) to the tape line, move back 10 yards (using the same pin, now at 20 yards) and take another shot using the same arrow, making note of where you hit (right or left). Then shoot again at 30 yards, using the same pin. After you’ve logged one quality shot at all three distances, the arrow holes should, more or less, form a vertical line on or near your vertical tape line. Note how all arrow holes are oriented to your vertical tape.

“This will tell you how to move your rest,” Beck explains. “If you impact on the line at 10 yards, catch the left edge at 20, and you’re slightly off the line at 30 to the left, it means [your rest is] pointed slightly to the left. So you have to move the rest a small amount to the right. Know that a 32nd of an inch is a mile in this instance. You don’t want to make huge adjustments, and you’re basically using just the horizontal adjustment on the rest.”

At this point, Beck advises double-checking your initial results by shooting the same sequence: Re-sight at 10 yards, then hold the same pin at 20 yards, and use the same pin at 30 yards. “When you get to where all your shots are on the tape, you’re ready to graduate to the next step.”

This next step is to shoot using the same process, but this time starting at 20 yards, followed by 30, then 40 yards.

Once Beck has an arrow that’s tuned from 10 to 50 yards, he will take that same arrow and re-sight his bow at 20 yards, using the sight’s top pin. Then he’ll remove the arrow from the target, possibly number it, and place it in what he calls the “good” pile. Next he will shoot his entire group of new arrows using the 20-yard pin, one by one, separating “good” from “bad” impacts. Once he’s re-shot the “bad” arrows to ensure their inaccuracy, he will shoot them again, after turning their nocks 120 degrees (so instead of the odd-colored cock feather oriented up, the next feather is now up. If the arrow is still inaccurate, Beck will again rotate the nock 120 degrees, one last time.

“By that time, about 95 percent of the time, you can get your arrows to tune. If they don’t, take those bad arrows, strip the vanes, and refletch in-between the original vanes. Every arrow has a stiff line in it—called the spine line. When the bow is shot, that spine line prevents the arrow from oscillating as much in that direction, so if the spine line is at 6 o’clock, it won’t flex as far as the 12 o’clock location. If you grab another arrow with the spine line in a different location, it will react differently. As you’re rotating the arrow, you’re trying to find the spine line.”

Be sure to mark the new “cock” feather on your newly tuned arrows. This is especially important if you’re shooting a rest where the cock feather must be oriented up or down.

Is It Worth the Time?

When your tuning is complete, you should have a bow and arrows that are capable of truly outstanding accuracy. If the process seems like a lot of tinkering and shooting, well, it is. But then, what is a few hours invested, to achieve incredible accuracy that will benefit you (and your family’s freezer) for the next several months?

“When you do get your arrows nock-tuned, it really is a huge difference. When I shoot, I shoot at golf tees,” Beck says. “You know, I’m amazed at many of the guys who shoot archery“They’re completely different from the guys I used to shoot competitive rifle and muzzleloader with. A rifle guy, he can’t change the barrel, so he handloads, and changes the bullet or powder charge, to get the load to match the gun. As an archer, I can nock-tune, and I can change helical and tip weight. But once I decide on the arrow I’m going to shoot, I have to change the bow to match it. You’ve got to take the time and make them play together. Most people don’t take that time.”

For more on the super tuning process, go to BloodSportArchery.com.