Bowhunting with a Recurve, and a Toddler

Taking your young kid hunting can be complicated, and incredibly rewarding 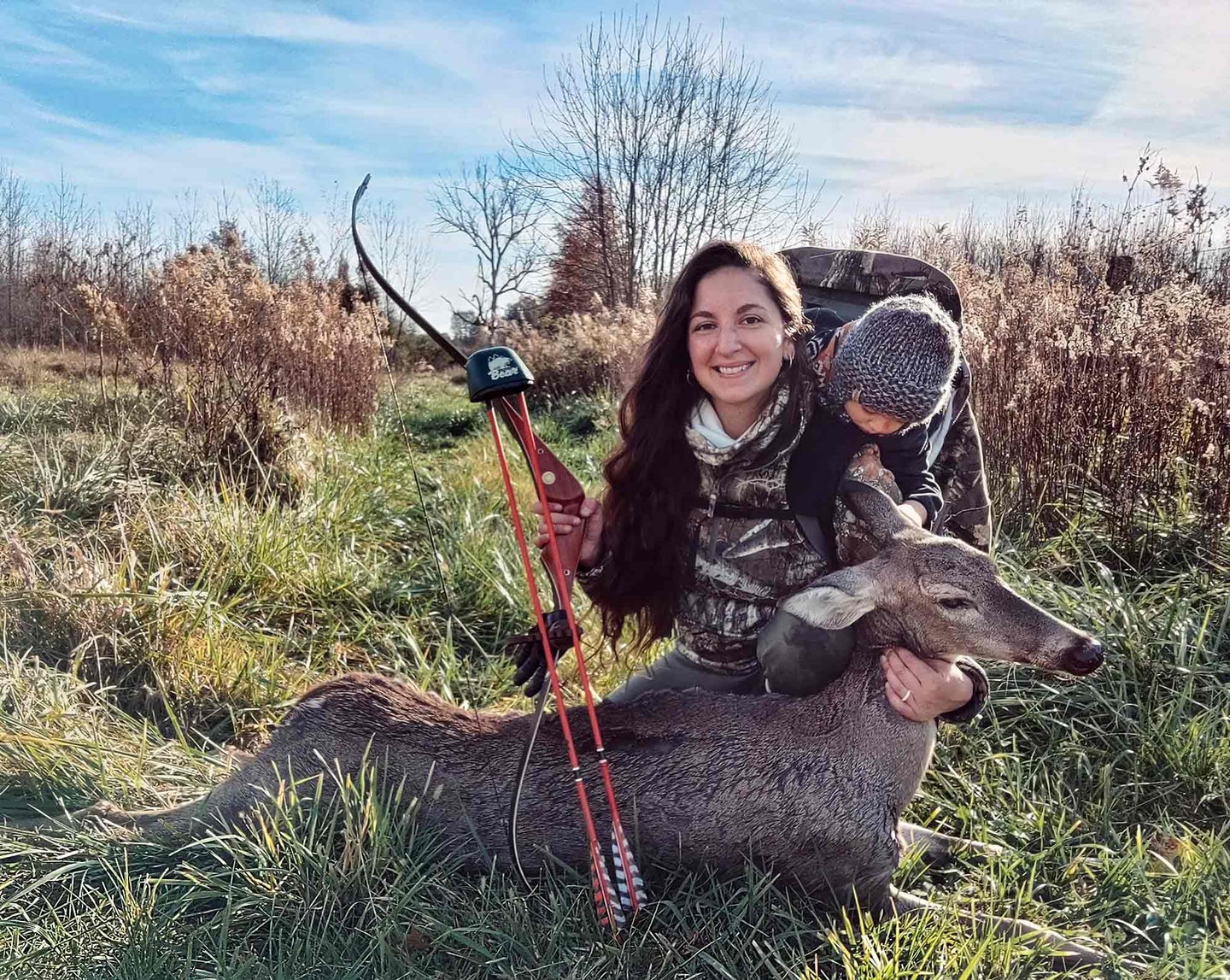 Like most deer hunters, my day starts before the sun comes up. Unlike most hunters, my alarm clock stands 2½ feet tall and wears pajamas printed with unicorns.

It takes me longer to get ready for a hunt than it used to. Persuading a 2-year-old to leave the house at 5:30 a.m. is no easy task, and it doesn’t always go as planned. I usually prepare snacks and drinks the night before so that I can get myself and Isabella dressed, then grab coffee, and get going without much else slowing us down—if we’re lucky.

On one particular morning this November, nothing seemed to go as planned. I was tired and unmotivated after not seeing many deer, despite weeks of hunting. Isabella couldn’t decide how many toys she wanted to bring along. And once I had my boots on and took a sip from my mug, I realized I hadn’t replaced the Keurig pod and was drinking stale coffee. By the time we finally climbed into the Jeep, the sun was already rising and the waning moon was starting to sink.

Warm days in November tend to discourage me from hunting. Despite knowing that deer will move in literally any weather, I rely too much on cold fronts. You simply have to be in the right place at the right time during those less-than-ideal conditions. But when you have a toddler in tow, you just have to hunt when you can.

The one upside to the warm conditions that morning—nearly 50 degrees by 8 a.m.—was that Isabella and I didn’t need to layer too much. Dressing kids for the weather ultimately plays a big part in whether or not they enjoy a hunt, but it’s also half the battle when you’re trying to coax a kid out the door. I layered fleece pants and a fleece jacket over Isabella’s pajamas (easier than trying to undress her and start from scratch before dawn), then added a lightweight camo jacket and a hat. Although dressing her is time-consuming, Isabella enjoys the process of getting bundled up in her hunting gear, which makes my life easier. She knows that getting dressed means we’re going on an adventure.

I often hunt public land until the neighbors start cutting their bean fields behind my house. Harvest was late this year, so I headed to one of my little-used spots down the road. We are lucky to live 10 minutes from hundreds of acres of public land, and I’ve done my best to take advantage of that. But when I reached the small pull-off where I planned to park, it was already occupied by a pickup. I made a U-turn and headed down the road. When we reached our backup spot, I lowered Isabella into her backpack carrier, and off we went.

Read Next: Evolution of a Hunter: The Lessons I’ve Learned and the Legacy I Want to Share with My Daughter

At Isabella’s age, staying quiet is one of the most difficult parts of hunting together. Although she’s old enough now to understand why she has to whisper, she doesn’t always remember to do it. So I just roll with it. I want to let her enjoy our little adventures in the woods, not constantly admonish her for behaving like the little kid she is. And, for those moments where silence really matters, I’ve learned that a well-timed lollipop works wonders.

I still-hunt from the ground, so most of our hunts together involve easing through the woods, looking for deer. We were only 15 minutes into our hike, cresting a small hill when we jumped several deer that had been bedded in the thick underbrush. I stood and watched as they bounded away, thinking I should have been a bit stealthier walking in. Just as I was about to start moving again, another doe stood up at 15 yards.

I shoot a traditional bow—a Bear Super Mag 48—and I shoot purely instinctively, with a tendency to snap shoot. I draw and release almost all in one motion. Because if I stop to focus and think about it, I don’t hit what I am shooting.

This instance was no different. The doe looked at me as I stood there, frozen. Then she turned her head to see where the other deer had gone. In that small space of time, I knew I had to shoot, or miss the opportunity. And as that thought ran through my head, I was already drawing my bow and releasing an arrow.

This all happened so quickly, I’m not sure Isabella was even fully aware that I had shot. I felt her feet brace on frame of the backpack carrier to get a better look as she pointed and shouted, “Deer, deer!”

I watched my arrow meet its mark exactly where I wanted it to go: right behind her shoulder. She took off with the arrow still in her, the dried goldenrod breaking and floating to the ground around her. It was hard to judge if the arrow had penetrated enough to hit both lungs.

I forced myself to wait for a bit, but once I picked up the trail, I found my arrow almost immediately. It had snapped roughly in half. The broadhead was still inside her and, judging from the lack of blood, I guessed it hadn’t punctured the opposite shoulder. This often makes for rough tracking, but ultimately an arrow broken off inside a deer isn’t a bad thing, and can result in a very quick death. Even so, I nocked a second arrow, and carefully worked my way along the scant blood trail.

RELATED: How to Tan a Deer Hide, the Easy Way

When I first had my daughter, I didn’t plan to take her hunting with me. I thought my husband could watch her, or that I would get a babysitter. Then reality set in. My husband works nights, which means he’s either on the job or asleep when I want to hunt. And our nearest family lives an hour away. Free childcare with a trusted family member would be impossible most days, and the list of non-family sitters I trust is very short. So, I had to choose to either take my daughter along, or not hunt at all.

This season is my second spent packing Isabella on my back, and I have loved every second of it. Yes, it’s often very difficult. I’m not as stealthy as I used to be, and I have to keep my hunts fairly short now. But it’s been worth it. My hope is that by raising my daughter in the woods, hunting will simply become a part of her life. She loves riding in the backpack carrier, and has been respectful to all the animals I have taken. If you think there is an age limit for hunting, I can assure you there isn’t. If you’re on the fence about taking your kids along on a hunt, do it. If you approach it with the right mindset, you won’t regret it.

I certainly didn’t regret having Isabella with me when, 70 or so yards from where I had taken the shot, I saw a patch of white. And there was my doe, my broken arrow a splash of orange protruding from her side. My hunch about the shot had been correct: the broadhead had lodged in her opposite shoulder after turning both her lungs to jelly. She had probably died within moments, falling white-belly-up in the brush as the sun made its way up the treeline behind her. I couldn’t think of a more beautiful sight.

This was the second deer I had taken with Isabella along, a feat I had originally been unsure I could accomplish at all. I had worked so hard for this, and was so thankful.

Isabella saw my downed doe at almost the exact moment I did. She immediately started asking to get out and “pet” it, stretching her arm over my shoulder and reaching toward it. After making sure the doe had expired, I let Isabella out of her carrier so she could walk over to it. The sun was breaking through the trees above us as Isabella reached out and gently patted the deer’s back with a reverence that was surprising for a two-year-old.

Normally, I wouldn’t waste any time before field-dressing a deer and dragging it back to the Jeep. But this moment was one to be enjoyed, and I didn’t mind waiting. Isabella looked back at me, and smiled. And I smiled back.