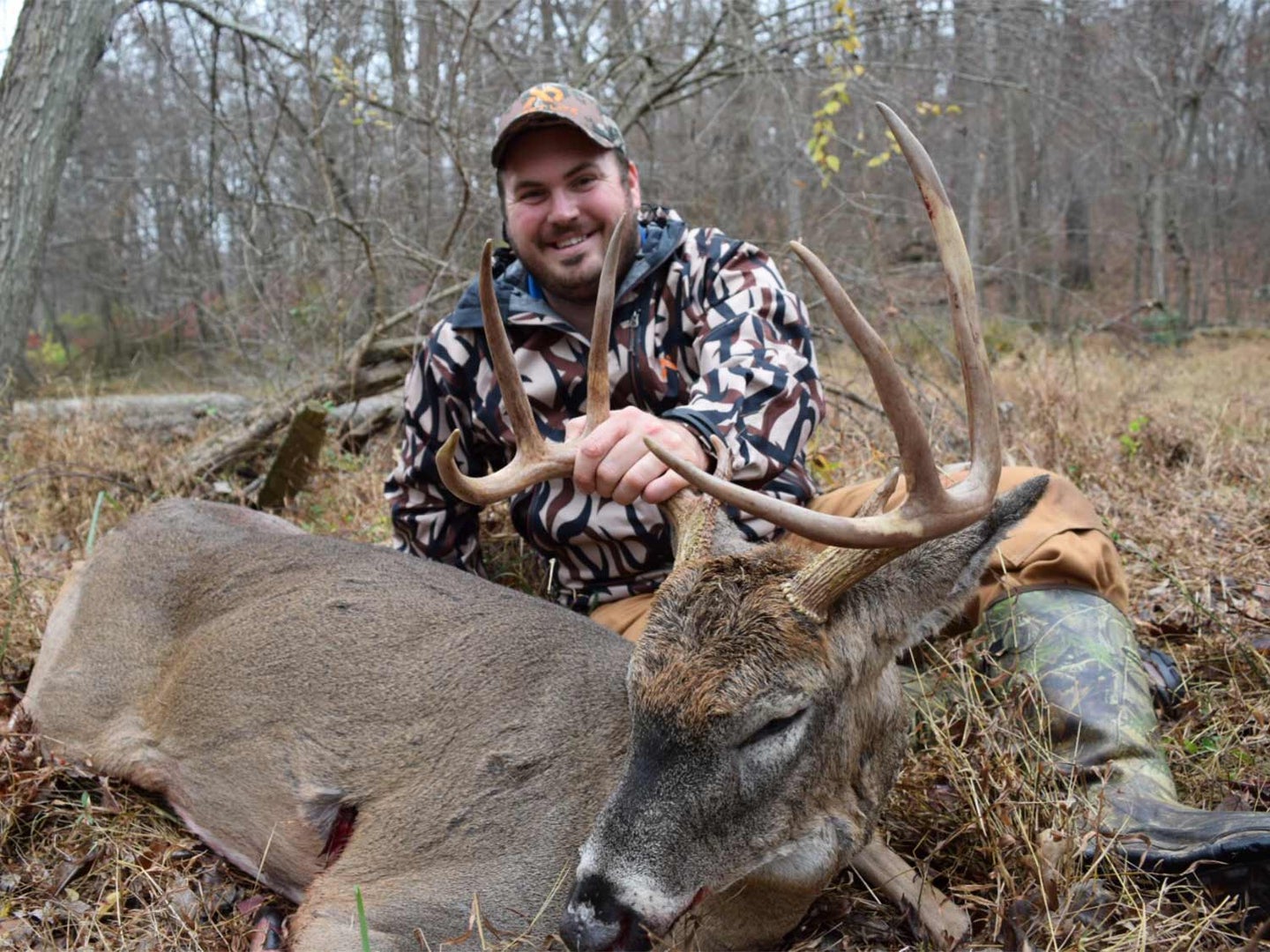 Imagine hunting year-round with no bag limit on deer. All those days in the field and the subsequent shot opportunities would undoubtedly make you a better bowhunter. With a flexible work schedule and an overpopulated deer herd, that dream scenario is Taylor Chamberlin’s reality.

Chamberlin hunts and lives in northern Virginia’s suburbs—just a short drive from Washington D.C. Virginia’s regular bow season is only a month, but there is a special antlerless season in areas with overabundant deer that expands the season to seven months. On top of that, Chamberlin helps local farmers who have crop damage permits.

After 11 seasons, he has spent close to 2,000 hunting days in the field and has killed over 500 deer. While Chamberlin shoots a lot of deer, he’s cautious in revealing those numbers because he has the utmost respect for the deer he pursues.

“I don’t focus on numbers as far as putting a notch in my hat,” he says. “I’m taking an animal’s life and whether that is the first deer of the season or the 120th; I don’t want to be disrespectful to that animal because it only had one life.” Chamberlin hunts to manage the deer herd and provide venison for his family as well as those in need.

Over those 2,000 days in the field, Chamberlin has developed an ability to make accurate shots that result in short recoveries. This skill has been refined by the necessity for short blood trails on small, suburban properties. Here is Chamberlin’s system for accurate shooting in these kinds of high-pressure situations. It starts with preparation and ends in a perfect shot.

How to Set Up The Ultimate Bow and Arrow

Chamberlin takes the utmost care and attention when it comes to setting up a bow. Through his experience, he has learned to work out every detail before he steps into the field.

“Confidence in gear is a big deal for me,” Chamberlin says. “Once you’ve worked on your own gear and tuned it to a high level, there’s nothing that could happen to my bow that I couldn’t fix myself. I don’t have to rely on anyone else and hope that they do things with the same care and attention that I wanted. I know that it’s done correctly because I handled it.” Here’s Chamberlin’s current bow setup:

Check the Bow and Mount Accessories

When Chamberlin gets a new bow, the first thing he does is check that the bow is within the manufacturer’s specifications. “I check the draw length, draw weight, the axle to axle length, and brace height,” he says. If any of these specs are off, he adjusts the string and cables to bring everything in spec.

When it comes time to mount accessories, he pays particular attention to his arrow rest.

“I like to set my arrow height so that the bottom of the arrow shaft goes through the center of the berger hole because I find that most bows hold a little steadier for me like that,” he says. “Then I set my center shot at 13/16 inches for my Mathews.”

Once all the accessories are mounted, Chamberlin jumps into paper tuning with a bare shaft. A bare shaft is an arrow without fletching. The theory behind this tuning method is that because fletching helps stabilize an arrow in flight, it can hide slight tuning errors. If you can get your bow to shoot a bare shaft, then when you add fletching, the whole setup becomes more forgiving.

“You can’t just shoot an arrow shaft without fletching because you have to account for the weight of the vanes. I weigh out a piece of electrical tape that weighs the same as my vanes and wrap that on the back of my arrow shaft,” Chamberlin explains.

Chamberlin makes adjustments to the cams while paper tuning. He uses Top Hat shims for left and right tears. They shift the cams left and right a few thousandths of an inch. For vertical tears, he adjusts cam timing. “Once I get a perfect bullet hole with three different bare shafts, I’ll walk back to eight feet and paper tune again,” he says.”

Then he moves to 15 yards and shoots a bare shaft and a fletched shaft through the paper. If any adjustments are needed, he moves his arrow rest just a hair. Once he gets bullet holes at 15 yards, the bow is tuned to his standards.

“I have never had an arrow not fly perfectly with a broadhead once I’ve gone through that process,” Chamberlin says.

A deadly bow and arrow set up isn’t complete without a broadhead. A bowhunter’s broadhead choice is critical. But, discussing that decision is an easy way to spark a lively debate among bowhunters. Chamberlin’s perspective is simple and utilitarian.

“Mechanical and fixed blade broadheads are just another tool for a job,” he says. “If I’m hunting an urban spot where I know that I’m taking very short shots at deer and there’s no chance of me hitting bone, I’m putting a mechanical head on because I want the largest hole put in an animal.”

In Chamberlin’s experience, mechanical broadheads produce shorter blood trails. However, If he’s hunting a larger property, a fixed-blade broadhead is his go-to because of its ability to penetrate bone better.

How to Make the Perfect Shot

The worst feeling is doing everything right, getting a deer within bow range, and then blowing the shot. Chamberlin’s system of preparation and shot execution is designed to avoid just that. Incorporate it into your routine, and you’ll be rewarded with backstraps and taxidermy bills.

“You have to practice like you’re going to play,” Chamberlin says. “You can’t just nonchalantly shoot in your backyard. You have to put yourself in as many real-world scenarios as possible to build that confidence.”

When it comes time to put that practice to use, here’s how Chamberlin makes the shot.

Range Your Shot and Aim for the Exit

Discipline is a constant theme in Chamberlin’s approach to bowhunting, and shot placement is another example of that discipline. He limits his shots in the suburbs to under 20 yards and waits for the perfect shot opportunity.

“I want a deer that is slightly quartering away, has their near side leg forward, is calmly feeding, and about 14 yards away,” he says. “I always aim for the exit. I’ve found that aiming for the exit is the best way to always put your pin in the right spot, and I want that arrow to exit right at the shoulder pocket.”

Visualizing the exit point gives Chamberlin the correct aiming spot for a complete pass through. On a quartering away shot, the arrow will enter in the center of the ribs pass through the chest cavity and exit behind the far side shoulder. This results in a double lung shot, which Chamberlin says results in the shortest blood trail.

Read Next: So You Want to Learn to Hunt with a Traditional Bow?

If the deer is walking, Chamberlin will stop it in his shooting lane by making a bleat sound with his mouth. This is a common tactic that you’ve likely seen on hunting shows, but there’s more to it than just making a sound.

“When you bleat at a deer, you have more time than you think to settle your pin. Relax and make the best shot possible,” he says. “It’s a big mistake to rush the shot.”

The Routine and The Shot

Anyone who has come to full draw on an animal knows the surge of adrenaline and nerves that experience brings. Chamberlin counters those nerves with a disciplined shot routine.

“I have a shot routine that I go through every time,” he says. “I will not put carbon in the air unless I’ve gone through that shot sequence. After I tell myself to pick the exit, my eyes lock onto where I want the arrow to exit, and they never leave that spot.”

Chamberlin then draws his bow and tells himself to “paint it,” which is his cue to aim.

“Then I say to myself ‘keep it painted’ while you ‘pull, pull, pull.’ I keep saying ‘pull’ until the shot breaks,” he explains.

This routine keeps Chamberlin’s focus on the process rather than the results, which is critical for staying calm.

“Another big thing is to not fixate on the antlers,” he says. “Once you’ve identified a deer as the one you want to shoot, just go into your routine. You don’t want to jump past your process and start thinking about the results.”

Once the arrow is released, Chamberlin doesn’t break his focus. He watches the arrow impact the deer because that provides critical information for the next steps.

Besides the lighted nock, Chamberlin uses a white arrow wrap and white fletching to make his arrows easy to spot. The white also helps Chamberlin interpret the type of blood on the arrow.

“Unless I see the deer fall, I always wait at least an hour before starting to blood trail,” he says. “The last thing you want to do is bump a deer. You don’t have to rush in there and cause a potential issue.”

All of this preparation, careful shot placement, and patience after the shot has led to an outstanding recovery track record.

“95 percent of the deer I’ve shot have died within 100 yards, and I couldn’t tell you the last time I lost a deer,” Chamberlin says.