How to Pattern a Turkey Hunting Gun 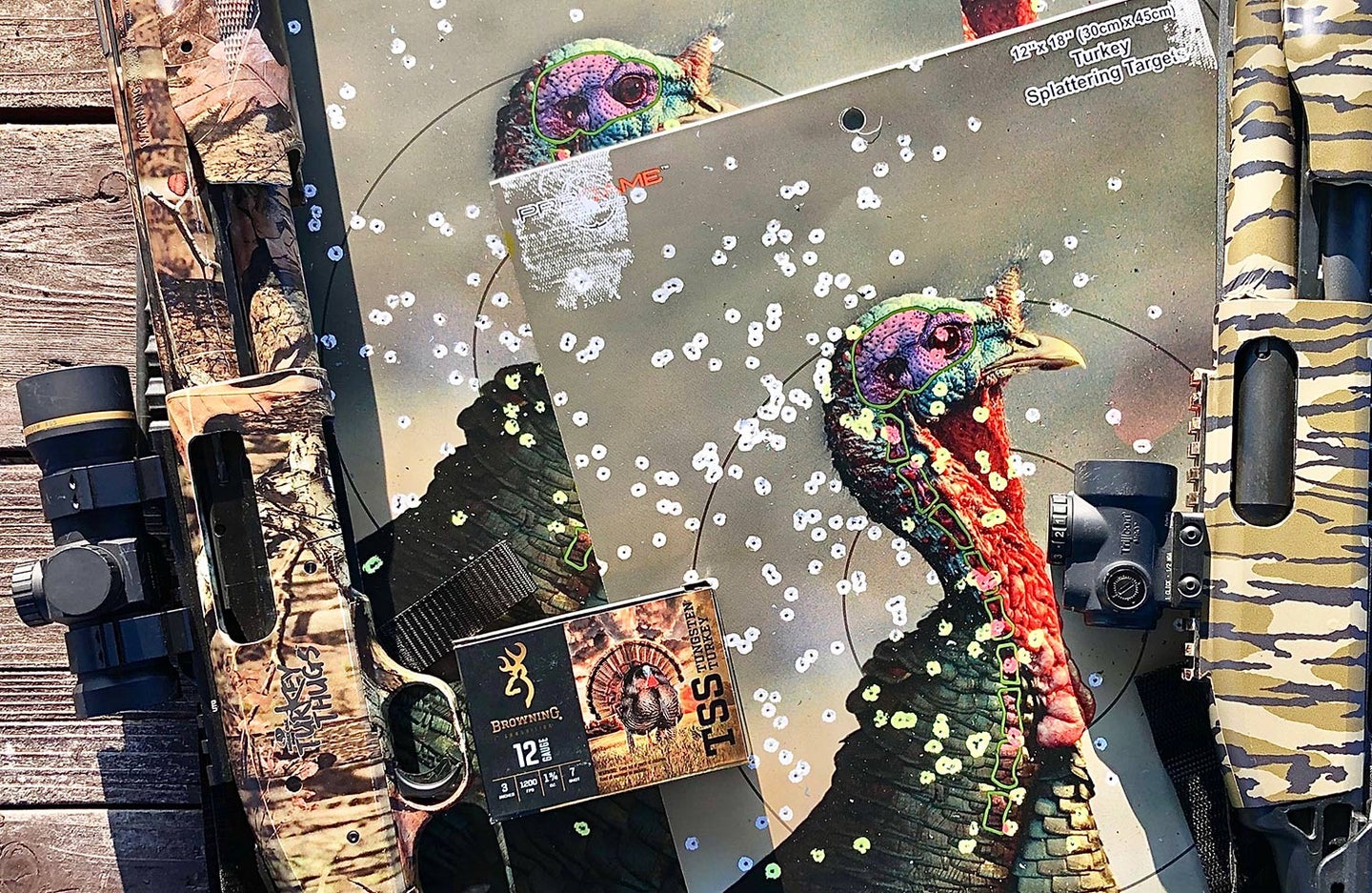 There are two goals here: the first is fine-tuning your turkey gun's point-of-impact; the second is testing it's pattern at a variety of ranges. Alex Robinson
SHARE

We live in the era of specialized turkey gear. Turkey-specific guns, loads, and chokes make it possible to cleanly kill turkeys at 50-plus yards. But here’s the catch: The super-tight patterns that these combos shoot actually work against you if you don’t put in the time before the season to pattern your turkey hunting gun and sight it in precisely.

Whether you shoot a brand-new Benelli loaded with the hottest TSS round, or an old 870 with standard lead No. 5s, patterning your gun before the season is critical to making a clean kill in the field. There are a lot of ways to miss a turkey, not understanding how your shotgun/load combination works should not be one of them. If you want a deep dive on understanding the details of pattern density and point-of-impact, check out this story on long-range shotgunning.

If you just want to make sure a gobbler tips over when you squeeze the trigger, follow the process below.

At most turkey camps I’ve been to, patterning a shotgun means marching a turkey target (a target that show’s a gobbler’s head and neck with a 10-inch circle around it) out to about 30 or 40 yards, taking a single shot, then looking at a target full of pellet holes and saying: “yup, that’ll kill a turkey.”

The problem with this is that at 30 yards, almost all turkey choke/load combinations are going to look pretty good. Also, at this range the pattern will be spread out just enough that it can be hard to tell exactly where the center of the pattern is on a standard turkey target. But the easiest distances to miss turkeys are at close range (where your pattern will be super tight) and at long range, where shooting mistakes are amplified. In other words, one shot at 30 yards doesn’t tell you much about your gun’s pattern.

We’re really after two things with this exercise: fine-tuning the point-of-impact of your shotgun and examining its pattern (how the pellets spread out on a 10-inch circle) at a variety of ranges.

So start at 10 to 15 yards and shoot off a bench, but avoid using a lead sled. It’s OK to use sandbags or another type of forend rest, but you must mount the shotgun to your shoulder in the exact way that you would in the field. Also, take this first shot with a target load, not a turkey load. Target loads are cheaper and recoil less, and the point here is simply to see where you are hitting.

Aim for the point on the bird’s neck where the red caruncles meet feathers and squeeze the trigger. Hopefully the center of the pattern—the area that is densest with pellets—hits right where you were aiming. If you’re zeroing in a red dot sight, this will take a couple shots and adjustments. As you can see in the photo below, the center of my pattern was just to the left of my point-of-aim. At farther distances, this shift to the left will get worse. I had to make an adjustment on my sight and shoot again.

But if you’re shooting without an adjustable sight and your pattern is off target, you’ll have to get more creative. If the gun consistently hits just a little high, as many field guns do, you can simply compensate by holding lower on target. Or, you can increase the height of your front bead with an aftermarket front sight.

If your gun is hitting low, you can increase the comb height with this clever hack. Increasing comb height raises your point-of-impact. This trick is also useful if you’re shooting a red-dot sight, but don’t have enough comb height to see through it while maintaining your cheek weld on the stock.

If you are consistently hitting left or right reassess your gun mount and make sure your eye is lined up straight down the barrel. If that doesn’t help, you can adjust the cast of the gun using a shim kit, but for turkey guns, the easiest solution is to install an adjustable sight kit. Adding an adjustable rear sight will allow you to easily adjust your point-of-impact left or right.

Next, push the target back to 30 yards and shoot one turkey load from the bench. At this range, you should be able to marvel at the perfect pattern covering your target. Thirty yards is still the ideal range to shoot a turkey, even if you are shooting the best turkey hunting loads and the best turkey hunting shotgun. After all, the fun part is calling them in close.

So if you don’t see an even smattering of pellet holes across a 10-inch circle at this range, you’ve got some changes to make. One possibility is that you are over-choked for the size shot you are using. Generally speaking, if you are shooting smaller shot (like No. 6s) you want a tighter constriction choke in the .665 range and if you are shooting larger shot (like No.4s) you want a larger constriction choke in the .680 range.

If you’re committed to a specific type of turkey load, do some research and find a choke that is known for pairing well with that load. There are a lot of aftermarket turkey chokes that are made to work with specific lines of turkey ammo.

Do you need a fancy choke and expensive shells to kill turkeys at 30 to 40 yards? Absolutely not. If your factory full choke prints a killer pattern at this range (and it just might) and you have no interest in killing turkeys at farther ranges, just get out there and start punching tags.

If you’re shooting a tight, aftermarket choke and your tricked out turkey gun is loaded with the latest TSS loads so you can kill a tom that hangs up beyond 50 yards, you better make sure that you’ve tested your set up at that distance before the season.

Shoot at least three targets at this range and evaluate your patterns closely. How many pellets are landing in the turkey’s vitals and how many are hitting inside the 10-inch circle? The old rule of thumb is that you need at least four pellets in the turkey’s head or neck for a clean kill every time.

But really, what’s most important here is the number of pellets inside the 10-inch circle. The old number was at least 100 pellets inside a 10-inch circle at 100 yards. But frankly, there’s plenty of B.S. when it comes to pattern density claims. I’m comfortable with patterns that put at least 80 pellets in a 10-inch circle, which is what this photo below shows. This was at 50 yards with Browning’s 3-inch No. 7 Tungsten turkey loads.

The pellets loaded in this shell are 60 percent denser than lead. Because they are relatively heavier, but also smaller in size and therefore have less drag, they retain their energy better downrange. But still, any fewer pellets, and there’s too much potential for a miss or wounded bird.

If I wanted to push these loads to 60 or 70 yards, I’d have to pair them with a tighter choke, but then I’d give up a little forgiveness at closer ranges. And for the way I like to hunt, I’m not interested in killing turkeys beyond 50 yards anyway.

So count out the pellet holes and evaluate your pattern honestly. If you want to keep pushing the range, go for it, but know that your real effective range is when you can no longer consistently put 80-plus pellets in a 10-inch circle. Bring a rangefinder, and never shoot at a bird beyond your effective range.