Jim Kauber, a shooting instructor and diehard western big-game hunter, weighs in on what the novice shooter can do to become more accurate with a centerfire rifle 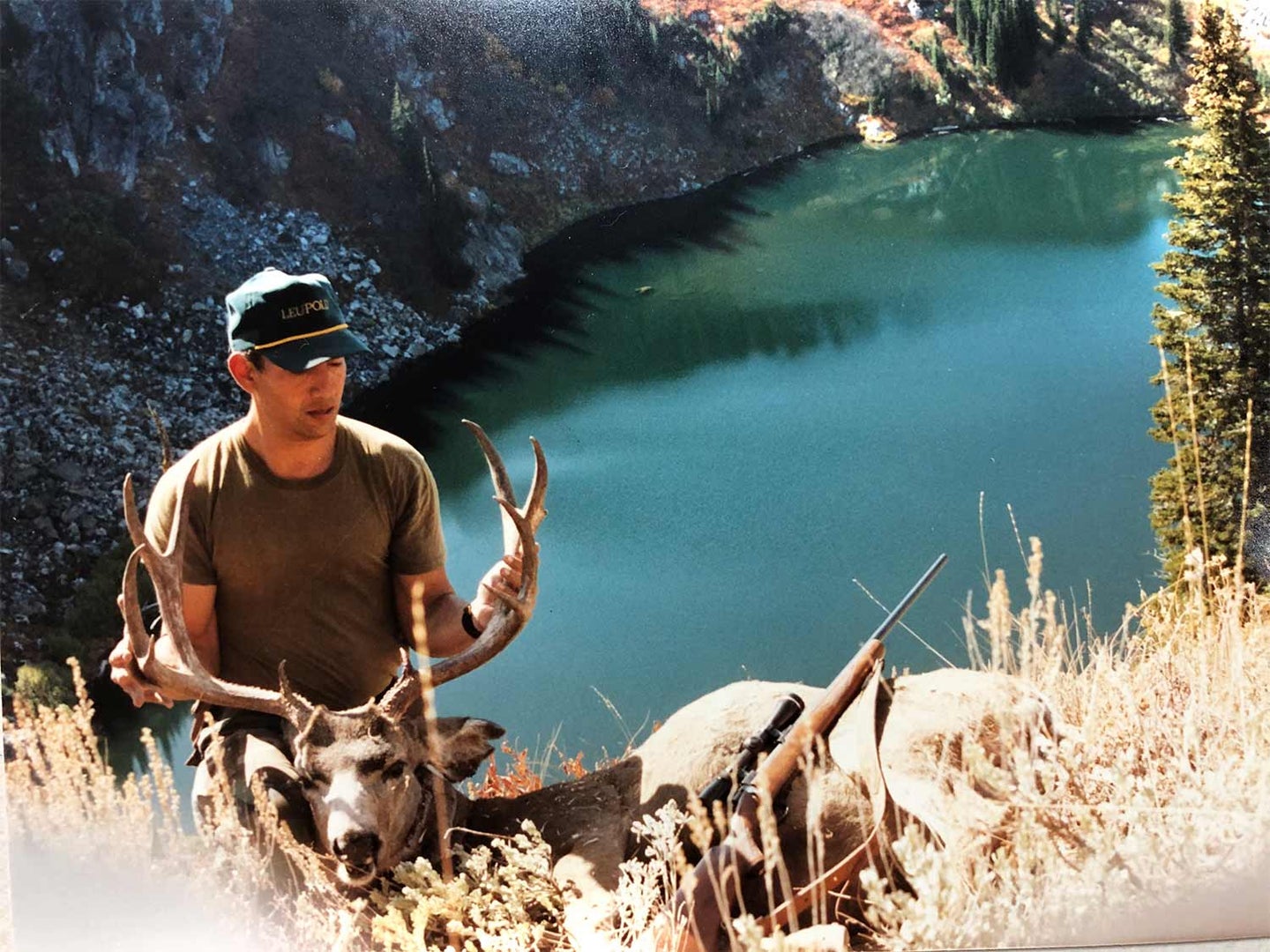 A younger Jim Kauber with an Idaho muley he shot with his Ruger .270. Jim Kauber
SHARE

Jim Kauber can teach anyone, regardless of age or experience level, to be accurate with a centerfire rifle. Though he spent two decades with the Navy SEALs and dedicates much of his time to helping elite shooters become even more precise, his first love has always been hunting. His fascination with the outdoors is what led him to become a SEAL. He’s proud of the military accomplishments, but equally passionate about dialing in hunters’ bolt guns.

He has a keen ability to evaluate your skill set quickly and tailor his instruction to it, which he does each summer at THE SITE as the Director of Training and a firearms instructor. Kauber has trained law enforcement and European Coalition special ops snipers, but he can also make you—the newbie shooter—a better rifle shot. After taking his hunting rifle course in Illinois, I had the chance to talk to Jim about how regular shooters can become more accurate. Here’s what he had to say.

Outdoor Life: One of the biggest hurdles in buying a centerfire hunting rifle is deciding between a packable lightweight gun vs. a more accurate, heavyweight one. What’s your take on that?

Jim Kauber: I think a lot of shooters rely too much on what their buddies tell them or what the guy behind the counter says when it comes to buying a rifle. A gun that weighs around 8½ pounds total—gun, bases, rings, scope, and sling—is just about right. It’s heavy enough to soak up recoil and it has a heavy enough barrel you can get more accuracy with. And it’s light enough to carry just about anywhere.

OL: But there is something to be said for packing a lighter rifle out West, right? All that hiking and climbing with gear…you want to have the least amount of weight possible.

JK: You have to take into account your skill level as an average hunter and the parameters of what kind of game and where you’re hunting. There has to be a balance between how far and long you can actually carry a gun versus how well you can shoot the thing. That’s why I advocate for a minimum 8½-pound total weight rifle. It’s a manageable weight to carry, and the barrel is heavy enough to give you some added stability and be more accurate than with some ultra-lightweight guns. The exception to that last statement is some of the semi-custom or custom rifles configured with carbon-fiber wrapped barrels; ultra-light, very accurate (sub-MOA), but they can be expensive.

OL: What if I’m hard-headed and dead set on carrying a 5½-pound rifle?

JK: I won’t advocate for that, but to be accurate, it takes a tremendous amount of quality practice. A lightweight gun can be tougher to shoot because of the recoil, and you don’t have the weight forward you will find with heavy-barreled rifles. But here again, if weight is a priority, the best alternative would be a hunting rifle with a carbon-fiber wrapped barrel.

OL: What caliber do you suggest shooting for hunters who are going to be chasing whitetails, mule deer, or antelope?

JK: The 6.5 Creedmoor is a justifiably trendy caliber for deer- and antelope-size game. A lot of guys think that if they shoot a magnum caliber it will make up for their deficiencies as a shooter, and that’s completely false. I tell people coming to THE SITE to stay away from magnums because what happens is they shoot it a few times at the beginning of the course and then they are done because of the heavy recoil. Their focus is now surviving the recoil versus concentrating on proper marksmanship principles. That being said, magnums definitely have their place in the hunting world where you need heavy, fast bullets to effectively put down the intended quarry or where foot-pounds of energy at longer ranges is essential. Taking into account what the rifle is going to be used for, you need to get a gun that will do what your intent is and one you can comfortably shoot a lot.

OL: Well, that makes this next question pretty easy: What rifles do you recommend?

JK: If I was going to tell someone what rifle to buy it would be a Tikka T3 or Savage in 6.5. These are affordable rifles most anyone can shoot and I’ve found them as accurate as need be for all big game. There are other commercially available manufacturers that offer quality rifles too. I just happen to be familiar with Tikka and Savage.

OL: So if a new shooter practices regularly and needs to take a 300-yard shot on a whitetail this fall, either of these two guns are a good option?

JK: Yes. A lot of people don’t realize that today’s rifles and ammunition (in most cases) are as, if not more capable than the person behind the trigger.

OL: What scope would you suggest?

JK: Tough question. There are so many quality hunting scopes on the market today. My advice is to not cut cost corners on your scope(s). If there’s any item in this market you get what you pay for, it’s in optics. I’m still a fan of the lower power adjustable magnification scopes in the 3-9x or 4-12x power range. I prioritize field of view over high magnification. Nothing’s more disheartening than having a big buck jump out of his bed 25 yards away and you have your scope cranked up to 20 power. You’ll never find him in your scope before he disappears.

JK: I reload all my own hunting ammo but recommend something in the 120 to 140 grains range. I believe that’s the optimum weight to caliber combination for deer-size game. Anything heavier in my opinion is too heavy for this caliber. I do like Hornady’s ELD-X, Barnes VOR-TX, and the Berger 135-grain Classic Hunter. Each of these shoot like match-grade ammunition and have excellent terminal ballistics.

OL: Is the 6.5 Creedmoor a viable elk round?

JK: I don’t want hunters out there to assume I think the 6.5 Creedmoor is a magical, do-it-all caliber for all game in the lower 48 states—I don’t believe it is. It’s great, even at extended ranges on deer-size game, but adequate for elk inside 300 yards. Consider the terminal ballistic performance of the caliber and selected bullet. It’s best to have a bullet that has a larger frontal area or substantially more speed to ensure a larger and deeper wound channel in an elk. Elk just don’t tip over like you would hope. They’re exceptionally tough and may travel substantial distances even when mortally hit.

OL: What gun are you hunting with right now?

JK: You might think I have a high-end hunting rifle, but I don’t. I’m still shooting an old 1970s vintage Ruger M77R in .270 Win. It’s been a great gun, and perfect for all of my pursuits in Washington, Idaho, Montana, and Wyoming, so there hasn’t been a reason for me to use anything else.

OL: Why is it important to zero in a rifle with the same loads you’ll be hunting with?

JK: One of the things I see when hunters come to take my class is they bring a variety of ammo, and they don’t understand why their rifle was zeroed a minute ago and the next shot it’s not. It’s because they are shooting different ammo with a different bullet weight out of the gun. Pick the round you are going to hunt with for the fall and practice with it, nothing else.

OL: There has been a popular trend to shoot animals at “long range.” What do you think about killing wild game at distance?

JK: The further out you get, the more you need to understand just how hard it is to place that first round in an animal’s vitals. I think people see guys on hunting shows with a high-magnification scope, making 500-plus yard shots, and think they can too. But in reality most don’t know what they are doing, and shouldn’t try it. In my opinion it’s unethical and the result is a wounded animal that’s never recovered.

OL: Are more expensive rifles worth the money?

JK: One of the reasons we purchase custom rifles is (for the most part) they WILL shoot better, are built on precision actions, match-grade barrels, triggers, etc., and are hand assembled for a fit/finish not found on assembly line type rifles. Besides, pride of ownership is a driving force. Regardless of how much money you spend though, you can’t buy capability. No matter if you buy a $600 or $6,000 rifle, if you’re not capable, it won’t make a difference. When all is said and done, it boils down to two simple factors for hunting success: bullet placement and bullet construction. You are the deciding factor in the former.

OL: How important is dry firing?

JK: I’ve always believed dry firing is an essential part of gaining proficiency in the field. Without it you’re “reinventing the wheel” when it comes to finding a quick, stable shooting position during crunch time while facing a big buck that may stand there for only a brief time before vanishing.

OL: Most shooters shoot from a bench rest. How much should a shooter practice from a bench vs. from field positions?

JK: Zero your rifle on the bench or prone. We all like to practice from the easy positions but this certainly doesn’t help us out in the field. From then on, practice positions you KNOW you’ll be in when in the field; standing, quick off-hand for shots inside 100 yards, off shooting sticks sitting, or if a longer shot is required, then off your backpack.

OL: Shooting at the range is so different than on a hunt. How can new shooters better control their breathing and nervousness when an animal is in the crosshairs?

JK: That’s very much up to the individual. Confidence in yourself and equipment capabilities breeds confidence in the field. The more capable you are as a hunter the less of these hurried, nervous “buck fever” feelings you’ll experience when bearing down on an animal through your scope. Here’s where quality field-related practice combined with the knowledge of what your firearm can do and your personal limitations comes into play.