European Hunters Are Switching to Thermal Optics. The Trend Is Coming to America Next

In European deer stands, hunters are turning away from high-magnification riflescopes in favor of thermals 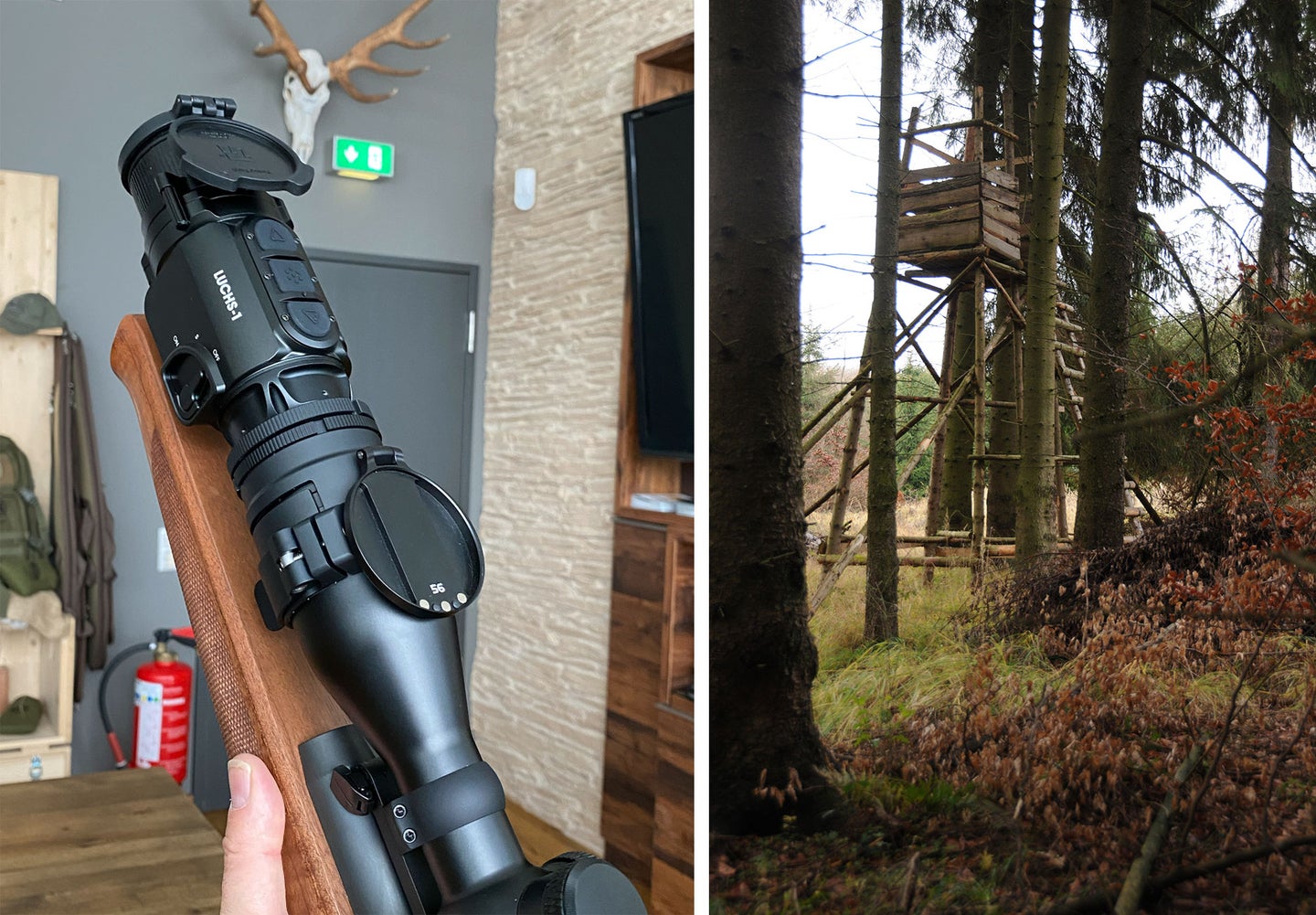 This set-up—a traditional riflescope paired with a thermal unit via a clip-on mount—is increasingly popular in European high-stands (right), from which hunters shoot boar and deer long into the night. It's a sort of work-around for thermal riflescopes, which are prohibited for civilian use. Andrew McKean
SHARE

You could argue that modern sporting optics evolved on Germany’s high seats, the elevated deer stands you’ll see on the periphery of just about any agricultural field across central Europe.

Germans call these stands Hochsitz, or high seats, but they’re hardly contained to Germany. Hunters from Finland to Bulgaria and from Poland to Portugal use these elevated stands to ambush roe deer and wild boar, mostly, but also red and fallow deer and even moose.

Because Europeans are generally not constrained by laws that require shooting to stop a half hour after sunset, they’ve developed specialized optics that allow them to make both positive game identification and accurate shots in extremely low light. Binoculars with very large objective lenses but modest magnifications enlarge the exit pupil, delivering as much light as possible to the eye. Scopes that have evolved from this tradition are distinguished by overlarge objective lenses, in the 50-56mm size, wide magnification ranges, and duplex reticles with an illuminated center dot that can be dimmed so that it’s barely visible in the dark. The best of these models can place a bullet precisely at over 100 yards in partial moonlight, the very conditions in which wild boar and roe deer are most active.

Hochsitz scopes include Leica’s excellent Amplus 6, available in a 2.5-15×56 version that features a duplex reticle with a crisply illuminated center dot. Zeiss makes its venerable V8 scope in a 4.8-35×60 for European hunters. And Schmidt and Bender’s Klassik in 2.5-10×56 was built specifically for high-seat shooters.

The Rise of Thermal Sights

But these expensive light-gobbling precision scopes are not selling well, say optics industry sources. The reason: the rise of thermal sights across Europe.

“It used to be that hunters wanted the biggest, brightest scopes they could buy,” says David Senne, product manager for Blaser’s optics line, which includes the excellent B1 model in 4-20×58. When this scope was introduced in 2018, the $3,500 price and odd configuration caught American hunters off guard. But the scope wasn’t really intended for the American market. Instead, it was designed for Hochsitz hunters who wanted to pair a best-in-class scope with their German-made Blaser rifles, says Senne, who is overseeing the launch of a new line of scopes, Blaser’s B2. Curiously, there’s no 56 or 58mm model in this line. That’s because German high-seat hunters are increasingly turning to thermal sights when darkness falls.

“I can’t say the market for big-objective scopes has gone away entirely, but it’s certainly diminished,” says Senne. Instead, European hunters are buying more modest-sized riflescopes, like the Blaser B2 2-12×50, that pair with thermal clip-on devices. Recognizing this trend, Blaser bought Liemke Thermal Optics in 2020, and has fast-tracked development of thermals that mate with traditional scopes.

American hunters frustrated with the procedural hoops and time investment required to buy a suppressor might be envious of our German cousins, who can purchase suppressors with ease. But while Americans have few barriers to buying thermal riflescopes from Burris, Pulsar, or Trijicon, these devices are illegal for consumers to own in Germany and other European countries, where they’re classified as military hardware. Instead, German hunters who want to hunt with a thermal device must connect a thermal viewer, which doesn’t have a reticle, to a traditional riflescope. These clip-on models are cheaper than thermal scopes, and have the added benefit of working as hand-held viewers when they’re not connected to a rifle.

I tested a number of these units over the past couple years. You can find my reviews of the best thermal scopes here and thermal optics here.

“In the old times, which were actually just a couple years ago, a European hunter might want a big scope so that they can get every bit of light,” says Senne. “Now, when it gets too dark to see through their scopes, they just clip on a thermal and hunt into the night. It’s making them more effective in even darker conditions than ever.”

Thermals is a category of non-traditional optics that’s in hyperdrive, with new models coming out almost monthly from a growing number of brands as technology gets better and more accessible to the consumer market. Indeed, when I visited him in Germany last month, Senne showed me Liemke’s new LUCHS (it means lynx in German) clip-ons with wider fields of view, longer usable range, and better image quality than their predecessors, which were class-leading devices just a couple years ago.

Senne says sales of those units are more than making up for the slowing sales of traditional riflescopes. Given the rise in thermal sales across America’s Hog Belt, and with units becoming cheaper and more available by the month, their migration from the Hochsitz of Germany to the whitetail woods of North America has only just begun.