Murder Hornets are Coming (But Probably Not for You)

But Asian giant hornets are definitely no joke. 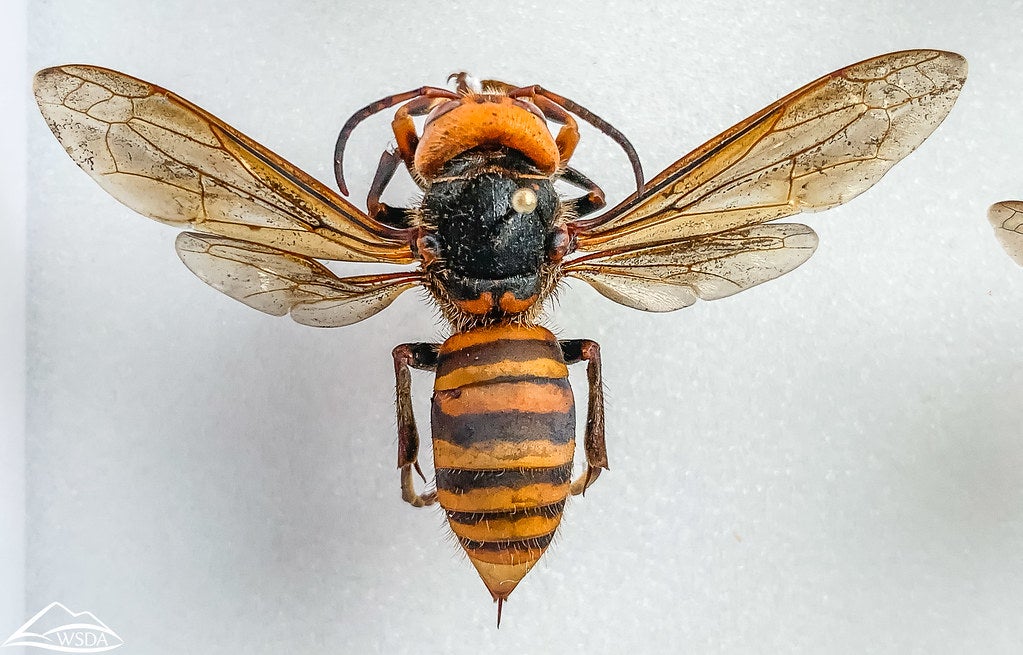 These invasive insects can be up to two inches in size, with a giant stinger to match. Washington State Department of Agriculture
SHARE

This article was originally published on Popular Science.

Unless you live under a rock, you’ve probably heard the term “murder hornet” sometime over the past few days. And while it might feel like they’re the next harbingers of the apocalypse, these freaky insects should probably be on the lower end of your ever-growing list of worries—even if you are a bee-lover.

The United States isn’t truly being invaded by bloodthirsty super wasps. But it’s still best to not go chasing after them on your own. Here’s what you should know about the ominous-sounding interlopers.

The ‘murder hornet’ is actually an Asian giant hornet

The Asian giant hornet, otherwise known as Vespa mandarinia, is indeed a giant bug—some reach lengths of nearly two inches. For reference, your average honeybee is a bit over half an inch long.

Some of that impressive length comes from the hornet’s stinger, which can clock in at about a quarter of an inch long. That appendage can pack a serious punch, poking through beekeeping protective wear and reportedly feeling like hot metal driving into your skin, according to the New York Times.

These stings give the Asian giant hornet its notorious reputation and brutal nickname. The Times estimates the bugs kill around 50 people yearly in their native homeland of Japan.

“It only takes a few angry hornets to inject a large amount of venom,” says Todd Murray, a Washington State University entomologist.

The hornets likely hitchhiked on a cargo ship from Asia to the Pacific Northwest, but it’s possible someone brought them stateside to cultivate as a food source. In Asia, they are sometimes eaten or used as a nutritional supplement, says Murray.

But before we duck and cover from the giant yellow and black insects, it’s important to know that these invasive little nightmares are kind of old news: they were first spotted in Washington back in December.

“That colony was destroyed, and that was months ago,” said Lynn Kimsey, an entomologist specializing in wasps at UC Davis.

Not to mention, these bugs aren’t inherently more murderous or terrifying than ones already common on our soil. You don’t want to be stung by any wasp, bee, or hornet. Those stinging winged animals we already have cause around 62 deaths each year in the US, and that’s without the help of the murder hornet. We also have plenty of insects with stings that are equally nasty, if not even worse.

As scary as the hornet sounds, Murray adds, they just aren’t that fond of hunting down humans to kill with their venomous pokers. Honeybees are their targets of choice.

Murder hornets are a threat to honeybees—but don’t freak out yet.

You’ve probably seen a couple devastating photos of dead honeybees, decapitated by swarms of murder hornets. Yes, this is terrible, and they really are a serious honeybee predator, Kimsey says.

These hornets will essentially take over a bee colony, she says, and murder the residents to feed their own offspring. It’s no secret that honeybee populations are already on the decline, are put in harm’s way thanks to certain pesticides, and are necessary to keep our agricultural systems alive. The hornets are also known to target other native pollinating bee species.

“If this particular [hornet] did get established in California, it could devastate the beekeeping industry,” Kimsey says.

But some bees are known to fight back—viciously. One natural defense that some Asian bees have is called “heat balling.” When confronted with a hornet threat, the bees swarm around the attacker and move their flight muscles rapidly. The resulting friction heats up the air around the hornet and overwhelms them with carbon dioxide.

While the hornets can dish out a pretty gruesome end to the bees, they can be served one right back by their own prey. But our native honeybees aren’t prepared for these hornets, and can’t necessarily cook or choke their enemies to death. That makes them more susceptible to predation.

So, are the murder hornets taking over?

Should our nightmares be laced with the idea of giant hornets swarming at us from every angle, murdering us and taking all we hold dear? Luckily, Murray says, only a few people in Washington have spotted the hornets, so even if there is a population of them in the US, it’s likely quite small. And if you’re a reader (or a honeybee) outside of Washington, you can take a deep breath.

“If there is a population establishing here in the Pacific Northwest,” he says, “our hope is that we’ve detected it early enough so that it doesn’t spread anywhere else.”

Just because he’s hopeful doesn’t mean that we should all stop paying attention to the animals around us. If you see an ungodly-large hornet just floating about your garden—or any creature that doesn’t seem quite right—you should take a picture and let your local department of agriculture know, just in case it’s not supposed to be there. After all, these bugs start to reemerge in the spring, so any hornets that have made Washington their home will be out and about starting now.

And whatever you do, please don’t try to catch or interact with a hornet, giant or otherwise. Even a sting from a smaller insect isn’t likely to feel too pleasant, and about one in 20 Americans are allergic to insect stings. While this invasive species may not be a sign of the end times, it’s still not a bug you want to mess with.