A Bear Got Trapped Inside This Colorado Pickup Truck 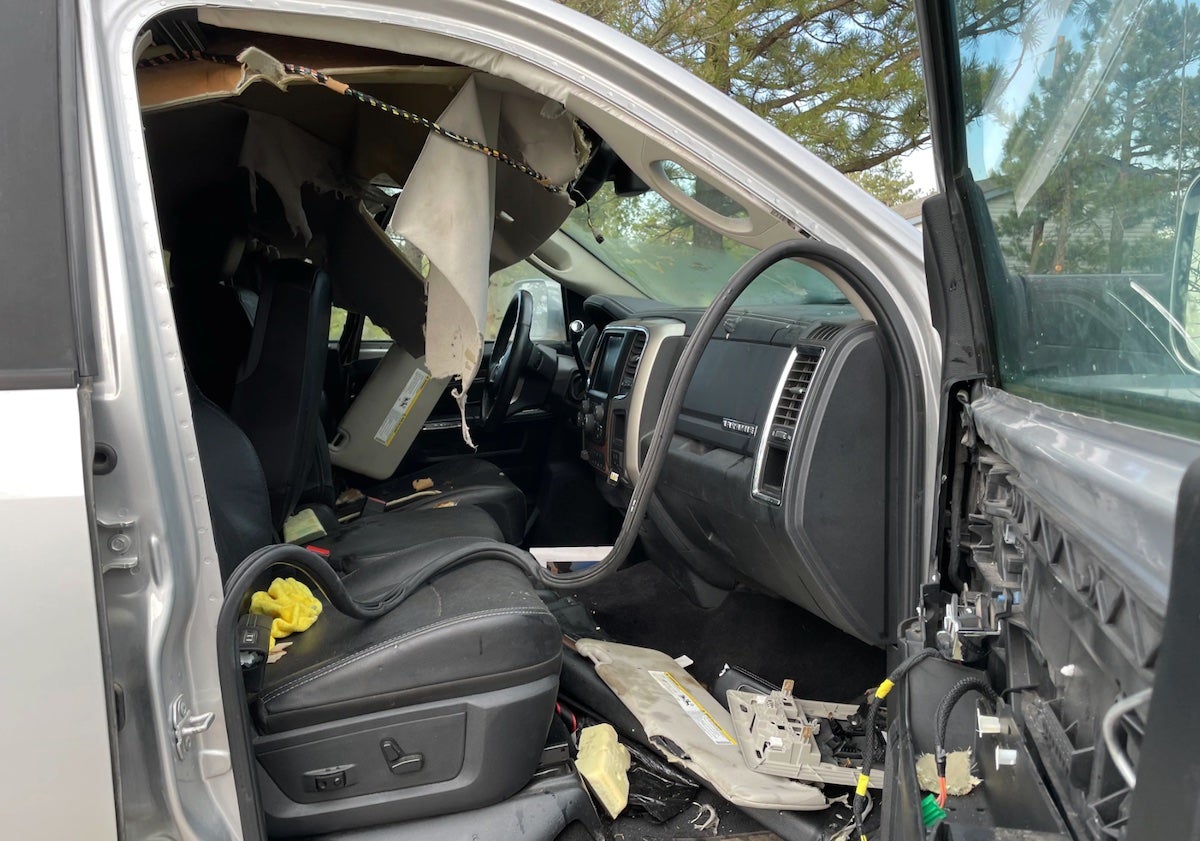 A local family had an unlikely run-in with a bear in Larkspur, Colorado, that had climbed inside the family truck. When the wind slammed the door shut, the bear spooked and destroyed the vehicle’s interior.

The truck owner found the bear inside their vehicle around 6 p.m. on May 10. A Douglas County Sheriff’s deputy was the first to arrive on the scene.

The deputy and the homeowner were able to attach a rope to the truck’s door handle. The homeowner and the deputy used the rope to open the truck door from the safety of the garage, according to Colorado Parks and Wildlife .

The homeowners recorded a video showing the bear’s release from the deck of the house. The video shows the bear running off, stopping once to look back, and then continuing on its way.

Wildlife officials believe the bear was attracted to food scraps in two children’s seats in the backseat of the vehicle.

“Bears are driven by their desire for calories and they follow their nose. They can smell things for up to five miles away so something as simple as chapstick, sunscreen, air fresheners, anything with those scents could potentially entice a bear to take a look inside,” CPW spokesman Jason Clay told KDVR.

The incident is the second in Larkspur within a week. CPW warns bears are more active and chances of conflict tend to increase in the spring.

Last year, Colorado received 3,701 reports of bear encounters, a 28 percent decrease from prior years. Wildlife officials attributed the reduction of conflicts to the weather and abundance of berries and shrubs, food that bears naturally feed on in the wild.

“In years where we get good moisture, and the food mast is readily available and abundant, we don’t tend to have as much interactions and conflict,” says Adrian Archuleta, CPW area wildlife manager in Durango.

On the other hand, excessive levels of drought or late spring freezes can cause a lack of food for bears, leading to increases in conflicts with human development.

“If people keep their trash and other potential food items, like birdseed and dog food, off-limits to bears, not only will they protect their homes and property from bear damage, but they’ll also protect bears,” says National Wildlife Research Center research wildlife biologist Stewart Breck.

Recently, several black bear attacks in rural neighborhoods have been reported in New Jersey and Canada. Although these attacks are rare, wildlife officials and agencies still ask residents to be weary during bear season and remove all food sources outside their homes.