After nearly six hours, more than a dozen rescuers and two helicopters succeeded in moving the huge rock off the man, who was airlifted to the hospital 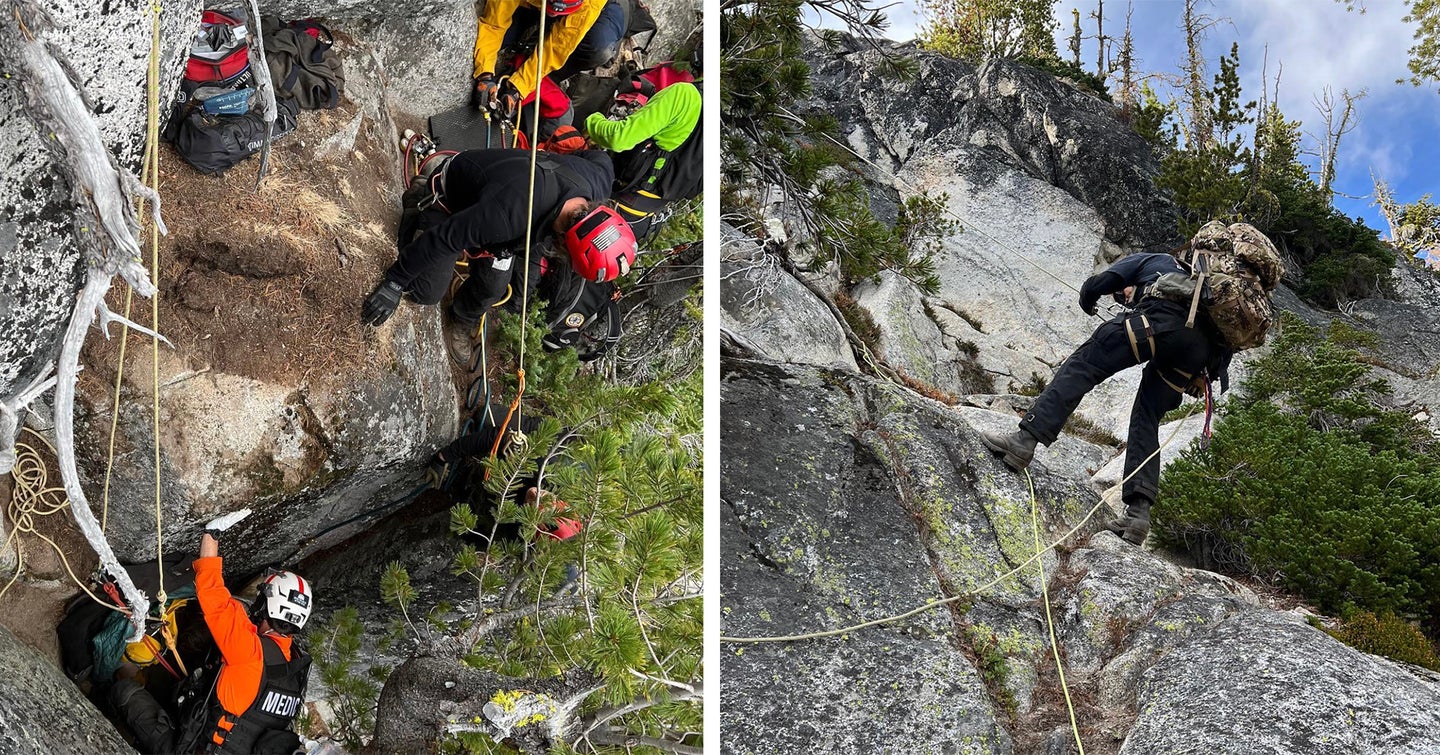 More than a dozen rescue personnel helped a hiker who had become pinned under a boulder in the Enchantments. Chelan County Mountain Rescue via Facebook
SHARE

Ben Delahunty was relaxing on a boulder near a lake high in the The Enchantments, a popular but remote hiking destination near Leavenworth, Washington, when the unthinkable happened: It started to move. Unable to get out of the way in time, the 28-year-old Montanan slid with the the boulder as it started down a cliff. By the time it hit a tree and stopped, both his legs and one of his wrists were pinned underneath. Delahunty was trapped.

Delahunty’s hiking buddy was able to call 911 by 9:30 a.m. (fortunate, given their remote location at 7,000 feet) and make contact with a search and rescue coordinator, according to a press release issued by the Chelan County Sheriff’s Office. But as the friend described the location where Delahunty was trapped, it became clear that not only would it take hours for a rescue crew to hike that deep into the backcountry, but that crews were going to have to use ropes to rappel down to his location.

And the boulder? The caller reported that it was the size of a refrigerator, weighing as much as 4,000 pounds or more. To move it off of Delahunty, rescuers would need something more than manpower. Search and rescue started making calls. The Wenatchee Valley Fire Department could provide air bladders, which can be inserted under heavy objects and slowly filled with compressed air to lift up to 90 tons.

“They’re used typically for vehicle accidents where they have to move a vehicle off someone if they’re pinned,” Chelan County Sheriff’s Office sergeant Jason Reinfeld told The Wenatchee World.

But getting rescue equipment there was a challenge unto itself. The Snohomish County Helicopter Rescue had to first fly to 10,000 feet to rise above the smoke from the nearby Bolt Creek Fire that was obscuring visibility in the area. By the time they dropped off the paramedics at the scene, it was just after noon.

As the second helicopter started bringing in additional personnel and equipment, the rescuers got to work. The crew working on the boulder clipped into ropes secured to the cliffside, as the edge dropped of several hundred feet. In fewer than three hours, Delahunty was out from beneath the boulder. Although the first attempt to hoist Delahunty into a helicopter was foiled by high winds, the weather cleared enough by 4:45 p.m. to airlift him out of the mountains. He was flown by helicopter to a nearby hospital. While doctors reported that Delahunty sustained serious injury to one of his legs, they don’t expect he’ll require any amputations.

In all, six local agencies were involved in the rescue, and the last SAR personnel finally reached the trailhead at 11 p.m..

“This was definitely something a movie’s made out of,” Wenatchee Valley fire department chief Brian Brett told the World.

“I’ve been involved with search and rescue for around 15 years and I can’t recall one as complicated as this,” said Reinfeld. “It really does speak volumes for the crews and partnerships that we have around here.”