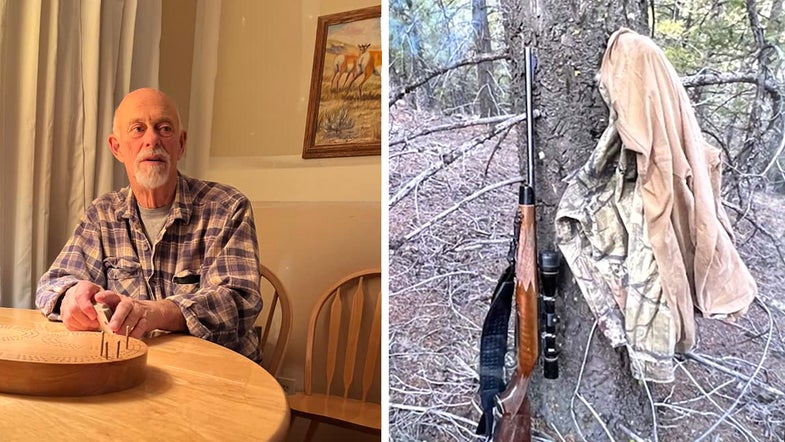 Missing hunter Michael Faller (left); Faller's rifle and hunting jacket were discovered leaning against a tree, near his four-wheeler. Missing Juveniles and Adults in Idaho, via Facebook
SHARE

The search for a missing rifle hunter in Butte County, Idaho, came to a close 10 days after extensive search efforts located the man’s body.

“Michael Faller was located this afternoon by K9 teams, deceased,” the Butte County Sheriff’s Office announced Saturday. “His family was notified close to the scene. Butte County Sheriff would like to thank our volunteers, K9 teams, pilots, and law enforcement agencies for their assistance. Please continue to keep his family and friends in your prayers.”

Authorities did not indicate a cause of death or offer an explanation for Faller’s disappearance. Faller’s body was located just a half-mile from his rifle and jacket—items that were discovered roughly 2 miles from his camp at the beginning of the 10-day search, according to his granddaughter. She expressed frustration with the Butte County Sheriff’s Office, which has been criticized by some of Faller’s friends and family for rejecting qualified volunteers to join the search efforts.

“From the beginning the small county has been turning down help from trained professionals in and out of state,” Faller’s granddaughter, who identifies herself as Caitlynn Parsnip on Facebook, wrote Sunday. “Trained equine search, air search, and dog searches were all turned down, and it ended up being a dog search that found him. It is a small county, and they do have their own search and rescue that’s volunteer driven. They did an awesome job, for their size. They took time off from their schedules and helped my family greatly, but it isn’t a huge operation. They were doing the absolute best that they could, but they needed more help. Help the sheriff’s office was denying daily. I am so happy that [Faller] has been found, and that’s what’s most important in the end. The closure for my family and I is what we wanted from the beginning. The search was successful, but knowing what we know now there’s no way it should have taken 10 days. 10 days, we were all hanging in the balance. Our entire family and every life my Papa touched, which is so many he was an incredible man and a wonderful person.”

The Butte County Sheriff’s Office told Outdoor Life in a statement last week that “volunteers who have experience and are well equipped with the adequate equipment and gear were not turned away.” In a press release dated Oct. 31, the agency listed thirteen law enforcement agencies, search and rescue teams, and air searchers who contributed to efforts to locate Faller.

Published Oct. 25, 2022: Michael Faller, 73, has been missing since he went hunting near Howe on Oct. 19 and did not return to camp that night. He had been camping with his wife since Oct. 17, according to East Idaho News, and had checked in at lunchtime the previous two days. When her husband failed to return to camp during the night, she left the campsite to contact the authorities. Elsha Parsons, who described Faller as her dad, posted to Facebook that same day to recruit search party volunteers.

“Faller was riding a red Honda ATV when he left camp,” the Butte County Sheriff’s Office wrote in an Oct. 24 press release, noting that their officers were joined by Clark County Search and Rescue personnel and volunteer searchers. “Searchers began an extensive search of the area in an attempt to locate the ATV and Faller.”

On the second day, searchers located Faller’s ATV. Parsons reported that his rifle and hunting jacket were found leaning against a tree nearby.

“The update is we still have not found him,” Parsons wrote on Oct. 21, noting the search would continue the following day. “But we did find his four wheeler and his jacket and rifle leaning up against a tree by his four wheeler so we at least know a better area of where to look … If anybody has access to horses or search dogs that would be very beneficial at this point. You can’t go any further than we found his four wheeler on a four wheeler you can on a dirtbike if you’re really good at riding. But a horse would be a good way to cover a lot of ground accurately. 100 thank yous for everybody that helps today and anybody that might come tomorrow it’s gonna be cold.”

Searchers have since focused their efforts around the location where Faller’s ATV was discovered. Five K9 teams have been deployed in the area.

“K9’s are still being actively used,” reads the Butte County Sheriff’s Office release. “Searchers with both fixed wing aircraft and helicopters have provided ariel [sic] coverage and assisted with search efforts as weather conditions have allowed. The terrain is very rugged and rough, and much of it is heavily forested. These factors have contributed to the difficulty of the search.”

The Butte County Sheriff’s Department has not posted a public update since Oct. 21, which begins with a note that “no extra people is [sic] needed right now.” The original post noted that the department has been “utilizing all available resources at this time with weather permitting. We can’t thank our community enough for showing up and assisting in the search. We will update here as we get more information.”

On Oct. 23, Parsons wrote, “Still no luck today. It has been very frustrating that the authorities have been discouraging help. They DO NOT have enough qualified help at all …. they keep posting they have enough volunteers and so a lot of people that were going to come up with horses have not come up.”

“Volunteers who have experience and are well equipped with the adequate equipment and gear were not turned away,” a spokeswoman with the Butte County Sheriff’s Department told Outdoor Life in an email. “The terrain is very rugged and difficult to navigate even with the best equipment. There are safety and accountability concerns to keep personnel safe in the terrain. We understand the families worry and [have] concern[s] in this extremely difficult situation but we have to take into the account the safety of everyone else as well.”

Parsons, who has been updating volunteers in the comments of her original Facebook post, wrote on Oct. 24 that the Clark County Sheriff’s Office has ended its participation in the search while the Butte County Sheriff’s Office is “scaling down man power.” She renewed her request for volunteers with experience navigating mountain terrain, which she described as “steep and soft ground and shell rock.”

“There’s just no signs of him or even an animal if maybe he thought he had gotten one because he was hunting,” family friend Ashley Countryman told East Idaho News. “There’s just no trace of anything.”

“[The family is] trying to hold on to that small glimmer of hope that he could still be alive, but at this point, they just want him found to bring him home, no matter the outcome, to get closure,” Countryman continued. “They don’t want to just leave him out there.”

Anyone with information on Faller’s whereabouts should contact the Butte County Sheriff’s Office.