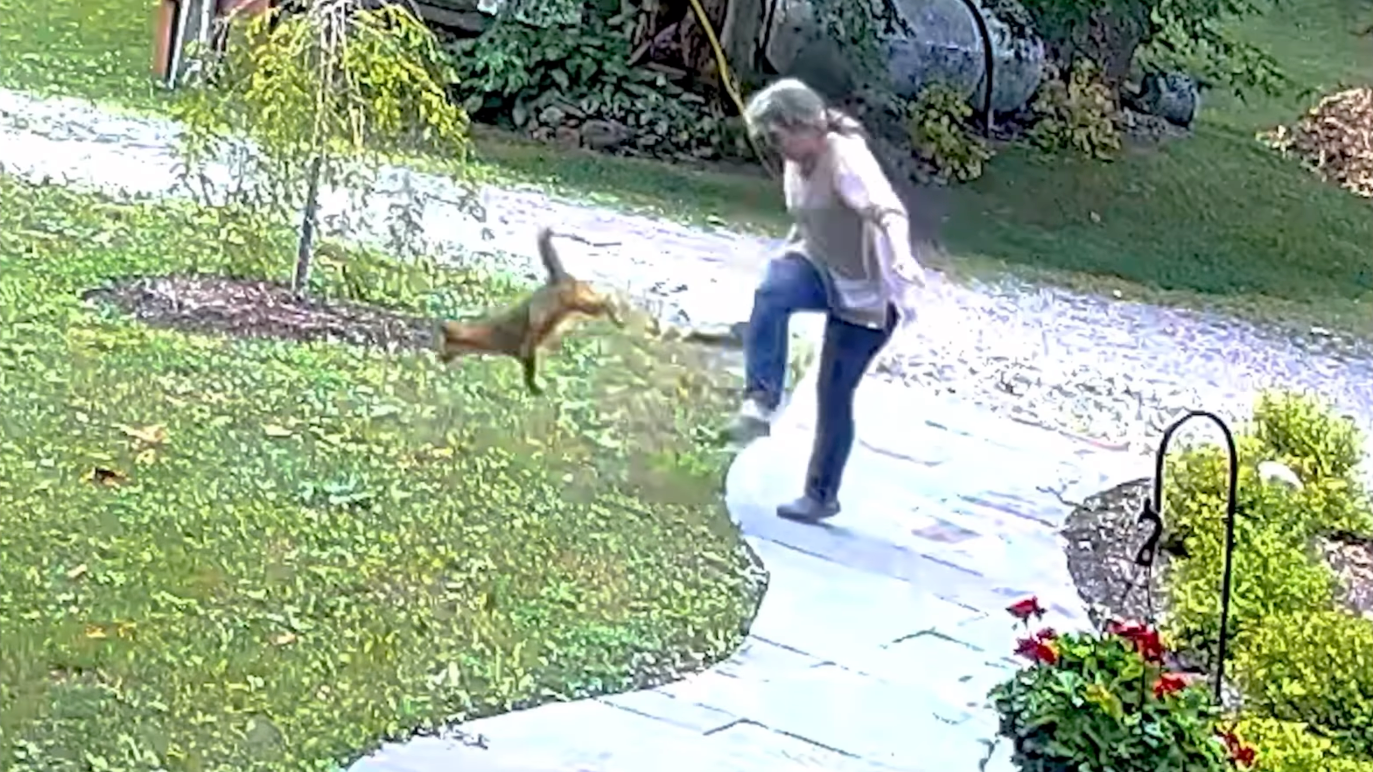 A woman was attacked by a rabid fox on July 25 while standing in her front yard in Ithaca, New York. Security cameras outside the house caught the surprisingly fierce attack on video, and one of the woman’s relatives, Ed Russo, shared the footage on social media earlier this week.

“She is okay and has been treated appropriately. She sought medical attention immediately,” Russo wrote on Facebook. “She did everything right.”

The video starts with the small fox trotting through the front yard as it heads straight for the woman. It’s around 2:30 p.m. according to the video’s timestamp. She’s talking on the phone and doesn’t even notice the animal until it sinks its teeth into her pant leg. The woman immediately shakes the animal loose and kicks it, which would usually be a strong enough reaction to send a fox running. But this isn’t your typical fox.

After the initial kick, the fox goes into attack mode, ferociously nipping at the woman’s legs as she spins around and then biting into her hand when she tries to pull it off. After about seven seconds of this, the two square off. As the fox charges with its teeth bared, the woman kicks it right in the rib cage and sends it flying. But even this isn’t enough to keep the fox at bay, and it makes another charge as soon as it hits the ground.

About halfway through the scuffle, the fierce little canid locks its jaws into the woman’s right hand. Still holding her cell phone in her left, the woman screams and spins around, trying to fling the fox off of her. Somehow, the fox hangs on at first but comes loose after the woman makes another flinging motion across the yard. One of her shoes flies off in the process.

The relentless fox then prepares to make another charge. However a man, armed with a stick charges in to the melee. As he comes up to whack the animal, the woman gets back into field-goal-kicking stance, and when the fox bends over to bite into the loose shoe, she takes her opportunity. The woman winds up and kicks, following through as she drives her foot into the fox’s jaw. The animal cartwheels and lands on its back. Seeing the man approach with the stick held high, the fox finally runs away at the end of the video.

Read Next: Video of a Man Chucking a Rabid Bobcat Is Taking the Internet by Storm

Russo explained in a follow-up comment that the fox was caught shortly thereafter when it tried to attack another person in the neighborhood. “The animal tested positive for rabies after it was put down humanely,” Russo said.