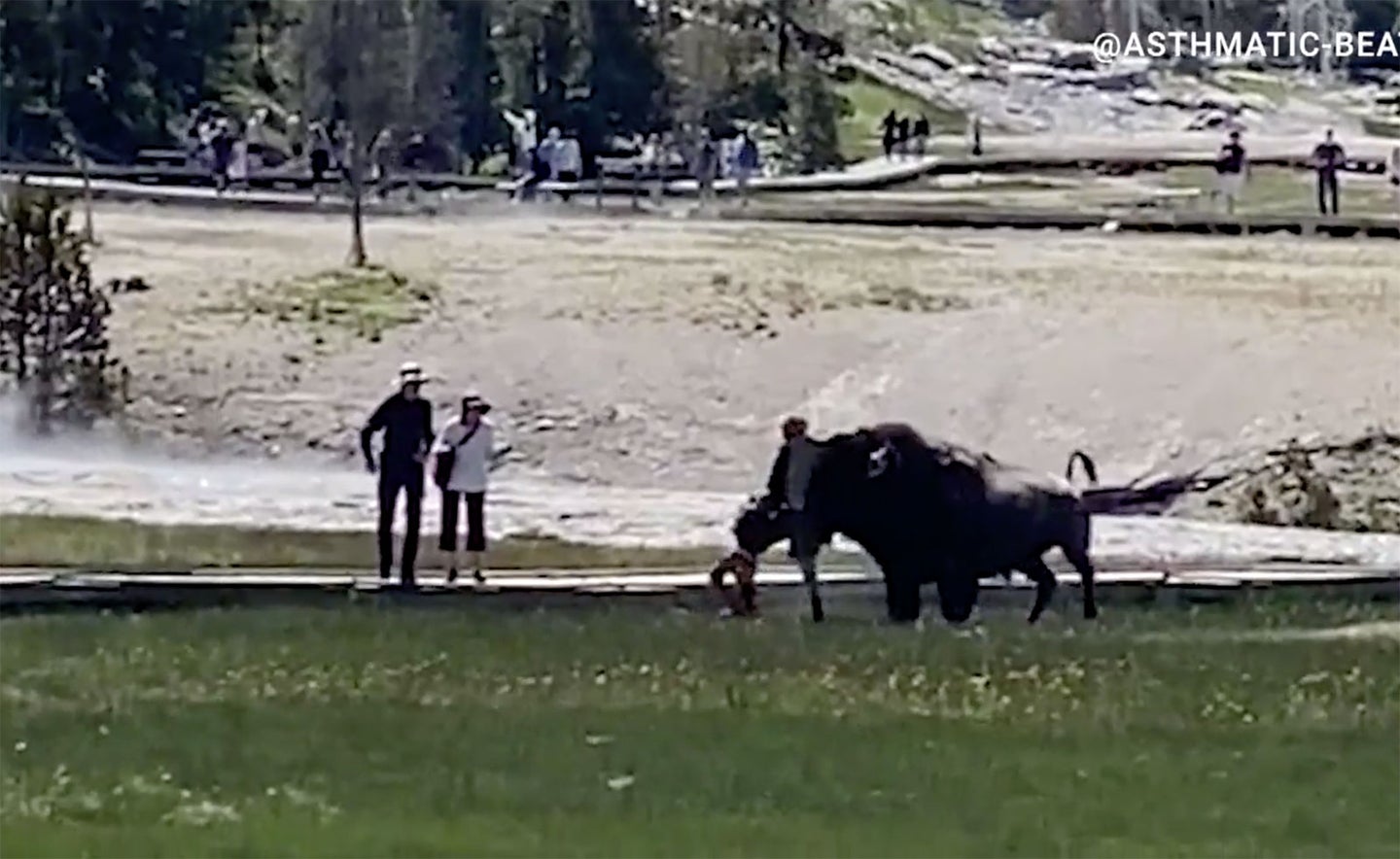 A 34-year-old man was gored by a bison inside Yellowstone National Park on Monday. He is currently recovering from the incident.

The unidentified Colorado Springs man was walking with his family on a boardwalk near Giant Geyser at Old Faithful when a bull bison charged them, according to a press release from NPS. “Family members did not leave the area, and the bull bison continued to charge and gored the [man],” the report read.

In the video you can see the bison approaching an older couple and a child. The 34-year-old man steps in and saves the child from getting trampled, but is gored in the process.

He suffered an arm injury and was taken to Eastern Idaho Regional Medical Center, which is the hospital for Yellowstone National Park, according to The Washington Post. It’s not clear if the man and his family purposely got close to the animal or if the animal charged them while they were trying to keep their distance. “This incident remains under investigation, and there is no additional information to share,” the Park Service said.

NPS reiterated that wildlife inside Yellowstone National Park are wild animals. This means they are dangerous and should not be approached. The park suggests people always stay 25 yards away from all large animals, including bison, elk, bighorn sheep, deer, moose, and coyotes. It also noted that people should stay at least 100 yards away from bears and wolves, and if there is an animal in your path, you should simply go a different way.

Just days later a 74-year-old Pennsylvania woman was gored by another bull bison in Yellowstone. The woman and her daughter “inadvertently” bumped into the animal while returning to their car, causing the bison to charge, according to the NPS. The woman was injured and transported to West Park Hospital in Cody, Wyoming.

This attack comes on the heels of a similar incident that took place in the National Park less than a month before. A woman from Grove City, Ohio, was gored and thrown 10 feet into the air on Memorial Day. In that case, the woman did get too close to the animal. The 25-year-old managed to get within 10 feet of the female bison on a boardwalk before it gored her.

On the park website’s safety page, it warns, “Yellowstone’s scenic wonders are sure to take your breath away: don’t let them take your life.” Bison can weigh up to 2,000 pounds and have caused more injuries to humans than any other animal in Yellowstone. They are unpredictable and can run three times as fast as humans.