Video: Florida Man Attacked by Black Bear on His Porch While Defending His Dogs

A doorbell camera captured the brief scuffle between man and bruin 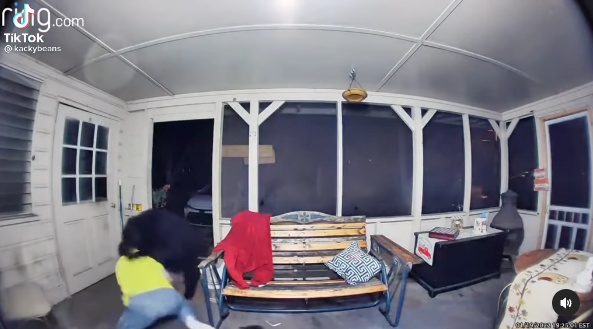 The man wrestled with the bear after it tried to come onto his porch and grab one of his dogs. via Instagram
SHARE

A black bear attacked a man on his porch in Daytona Beach, Florida, on Wednesday night. A doorbell camera captured footage of the scuffle that ensued when the bear came through the doorway of his screened-in porch and tried to grab one of his dogs. The man rushed to defend his dogs, and was able to keep them out of harm’s way while he briefly wrestled with the bear and shoved it back outside.

Officials with the Florida Fish and Wildlife Conservation Commission responded to the scene around 7 p.m. on Jan. 19. They say the man was hurt during the struggle, but that his injuries were not life-threatening. The dogs were uninjured.  FWC officials set a trap in the area after they searched for the bear but were unable to locate it. They say that if the animal is captured, it will be humanely killed according to FWC policy.

This is the second black bear attack to occur in Volusia County in the last week. The first incident involved a woman in DeBary, a little more than 30 miles inland from Daytona Beach. That resident also happened to be with her dog at the time, and they were walking in the park when the bear attacked. The woman was scratched on her face, hands, and back, but she recovered from these injuries after a night in the hospital. The dog, which disappeared briefly after the attack, was also recovered, and was not seriously injured.

Despite the fact that these attacks occurred in the same county in the same week, FWC told a local news outlet that bear attacks in Florida are extremely rare. “The FWC receives up to 6,000 bear-related calls a year, and [we] have documented only 15 incidents of people being moderately to seriously injured by bears in more than 50 years,” the agency said in a statement.