Watch: Texas Hiker Gets Charged and Gored by Bison

"I didn’t want to go through the bushes again." 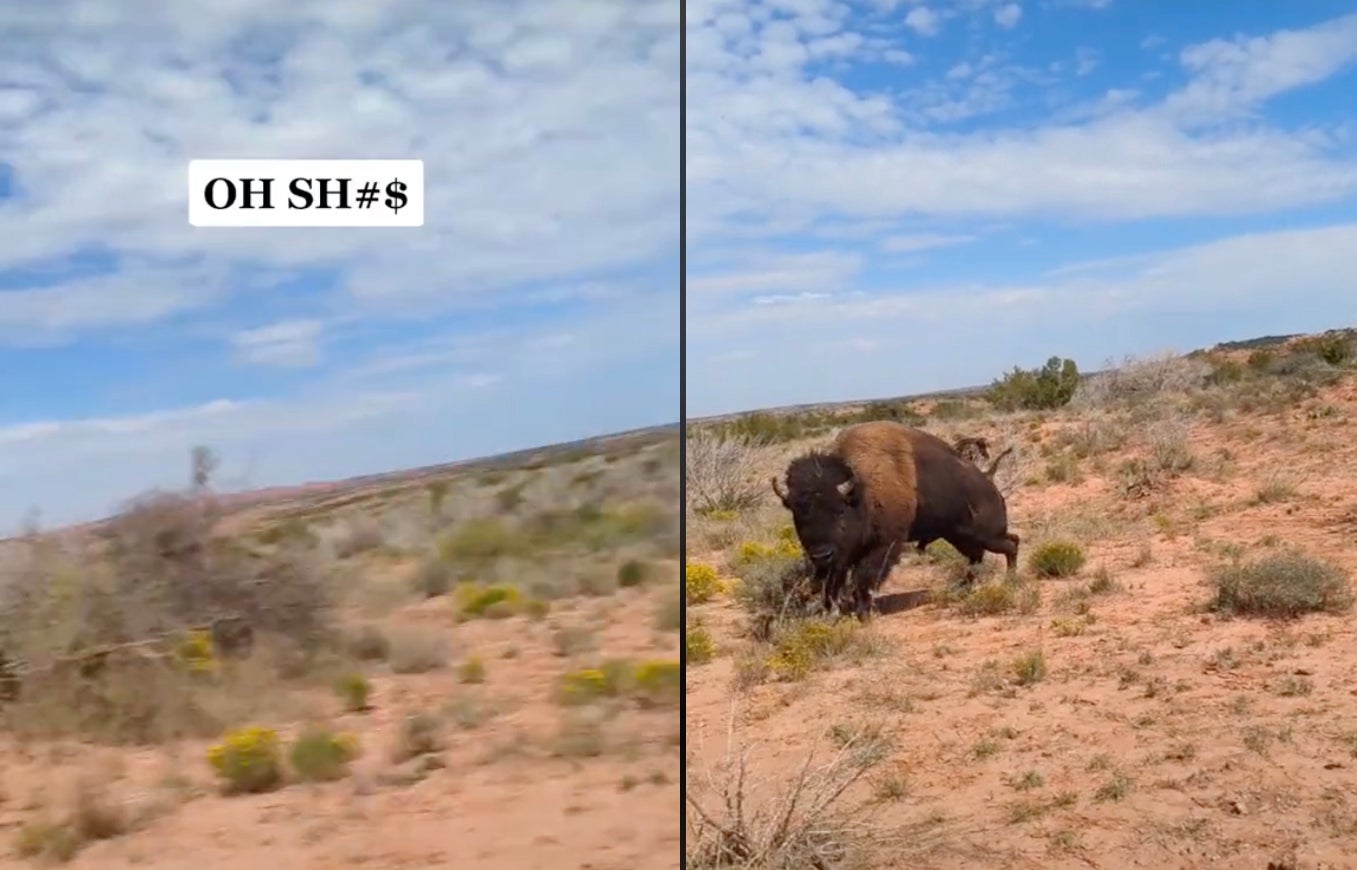 A woman hiking in the Texas panhandle recorded the bison that charged and gored her. Rebecca Clark / TikTok
SHARE

A woman who was hiking by herself in the Texas panhandle last week was charged and apparently gored by a bison. The incident took place in Caprock Canyons State Park and Trailway.

Rebecca Clark posted the footage to her TikTok account, where you can see her trying to slip past a trio of bison crossing a well-defined trail.

“There you go, keep going,” Clark says calmly, the camera edging closer to the crossing. “I don’t want to deal with them. I just want to go by—come on! Keep going … I didn’t want to go through the bushes again.”

Just as she gets back on the trail and the bison are walking away from her, the last one grunts as it turns around and charges. You can clearly hear Clark say “oh shit” before she’s knocked sideways into the brush and she starts screaming in terror. The camera rolls out of her hand and you can hear her yelling “Oh, oh my God!” before she picks it up again and the video cuts out.

In a subsequent video, Clark says the bull had rammed her back, gored her, and threw her into a mesquite bush where she “laid for 50 minutes until help arrived.”

She sent a screenshot of her SOS text, which read “Help. I’m on eagle point trail at caprock canyon and I’ve been hit by a Buffalo.” In subsequent texts to friends and family, where Clark noted she could still feel her legs despite the gash in her back, she pointed out that the incident would “make a hell of a tick tock.”

She was airlifted to the United Regional hospital in Wichita Falls, Texas.

“I am okay!” Clark wrote in the caption to the follow up video. “Thank you for all your concerns and to tell you the truth your humor as well.”

The incident was similar to dozens that pop up on social media where “tourons” and other recreationists get too close to bison and other wildlife. At least three people were gored by bison in Yellowstone National Park this summer. The distinction here is that Clark seems to know she messed up.

“I was charged and gored by a bison because I was [too] CLOSE to be passing them on a trailway,” wrote Clark in the caption. “I am posting to support safety while enjoying Texas State Parks.”

To accompany the footage, Clark chose the song “dumb dumb” by Mazie. The chorus repeats the word “dumb” over and over, alternating with the line, “everyone is dumb.”

Read Next: Woman Survives 2 Nights With a Broken Leg in Colorado’s San Juan Mountains Before Flagging Down a Train

Clark followed the initial attack and rescue videos with additional posts that include “lessons” on safely observing bison. The bison in the area are descendants of the Charles Goodnight herd and were moved to Caprock Canyons State Park in 1997. Genetic testing indicated that the herd is possibly the last remaining group of Southern plains bison, and the animals have been declared the official bison herd of Texas. They are managed by Texas Parks and Wildlife Department.

“Bison are the largest land animal in North America. That means they need a lot more personal space than you do to feel comfortable,” advises TPW. “As a rule, bison require at least 50 yards (half a football field) between them and people. Use the ‘Rule of Thumb’ to make sure you are far enough away: Stretch your arm out away from your face and give bison a thumbs up! Now close one eye. Can you cover the bison with your thumb? If not, you’re too close!”

The TPWD advises visitors to pay attention to bison behavior, noting that agitated or anxious bison will raise their tails in a question mark. Other signs of agitation or “disapproval” include pawing the ground and a lowered head.