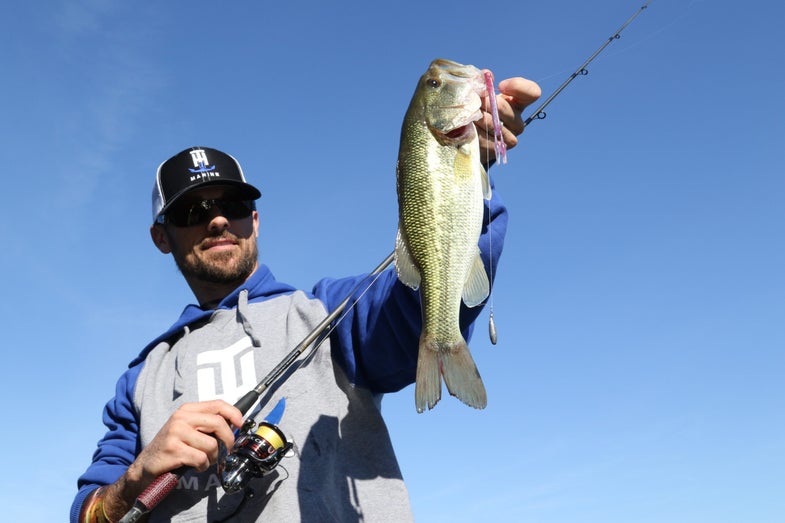 Okay, this might be a bit of a stretch, but think about it: Pickles wrapped in cheese, cheesecake topped with black olives, Cheese Whiz sandwiches. . . Well, according to babycenter.com, pregnancy cravings are a real thing. Similar biological urges, while limited to natural forage, occur in female bass as they prepare to move into their prespawn staging areas.

Packing on the calories before their forthcoming reproductive fast, pre-spawners are renowned for their aggressive feeding, but you might want to tone down the big and bold stuff right before the fish make that transition from their winter patterns. It’s not that they lose their appetite, it’s simply a time of adjusting to progressively shallower water. Here’s what to use:

During a recent Cost FLW Series Western Division event on Lake Havasu, fifth-place finisher, Marty Lawrence tried three sizes of Keitech swimbaits — 4.8-, 3.8- and 2.8-inch — and found the smallest of those tuned swimbaits to be the most effective. Slow, methodical retrieves are the ticket here.

When tournament winner Joe Uribe Jr. found more aggressive fish that were farther along in their transition, he caught them on a 7-inch swimbaits. But for babying the ones that were still on their way up, he used this simple, yet effective, bait named for Ned Kehde, the midwest outdoor writer/angler credited with promoting it.

Using a 3/16-ounce mushroom style jig with a 4-inch Yamamoto Senko cut down to 3 inches, Uribe painstakingly walked the Ned Rig across the sloping edges of gravel bars. Frequent pauses with light rod tip wiggles gave the impression of a baitfish, maybe a crawdad, feeding along the hard bottom.

Dependable in any tough scenario, you form this versatile rig by securing a hook with a Palomar knot, leaving a foot or so on the tag end and passing that tag back through the hook eye top-to-bottom so the hook stands perpendicular to the line, with a leader holding a weight below.