Most anglers focused on deep water, but Fischer went shallow and won the most prestigious tournament in kayak fishing 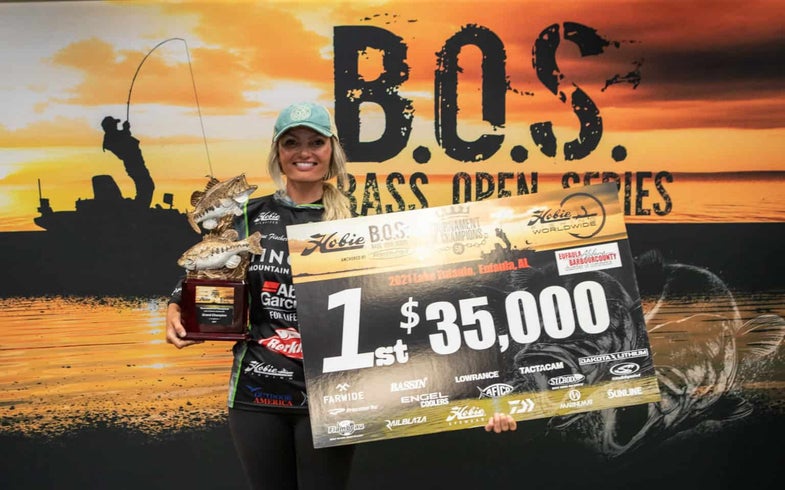 The best kayak bass anglers in the world descended on Lake Eufala in Alabama from Nov. 12 to 14 for the 2021 Hobie Tournament of Champions. After three days of fishing, I stood alone, beating out 49 other anglers, and cashing a $35,000 check to win the most prestigious tournament in our sport. I’d never fished Eufala before, but knew the fishing would be tough, and that conditions were going to change with a drop in water temperature each day. Here’s how I won the TOC.

This was the warmest day of the week, and since it was a Friday, the fish had several days to rest from the previous weekend’s local bass tournament. So, I picked up my 74HF rod, and tied on a Dirty Jigs Swim Jig. My fish were keyed in on shad, so I stuck with a shad pattern for both the jig and the trailer. I moved fast, trying to cover lots of water to find active fish. This style of fishing helped me learn the area a little better, and find what cover the bass were in. I eliminated a lot of water that day and had a good enough catch limit on that swim jig to finish the day in 11th place.

Day 2: The Wind Dictated the Bite

I started the day with a spinner bait, thinking it would really play with the added breeze, but I wasn’t getting bites. So, I picked up my flippin’ sticks. I grabbed three different casting rods that had a 3/16-, 5/16- and ¾-ounce Texas-rigged ZMAN Goats in watermelon red. My fish on Day Two were buried in bank grass, so I had to slow down and work my way in with my flippin’ set ups. My key bites all came flippin’, which wasn’t easy in the wind, but my catch limit put me in the top three as we headed into the final day.

A cold front moved in overnight, so my guess was that shallow fish would be a little less apt to follow moving baits, which would force me to slow down. I noticed the water temperature was a few degrees cooler than it had been when I first launched, but it wasn’t enough of a drop to cause the fish to retreat to deeper water. I decided to stick with my main lake bank grass pattern, and rigged up the ZMAN StreakZ in pearl, Texas-rigged either weightless or with a 3/16-ounce belly weighted hook to get it down in the grass. I skipped the fluke-style bait back into the isolated clumps, slowing twitching it out and letting it fall. Most of my fish bit on the fall. Slowing down and methodically picking about in the bank grass proved effective, as I put up my biggest bag of the three-day tourney and won it all.

Read Next: How to Rig Your Spinning Rod to Catch Bass in Heavy Cover

Besides knowing what baits to use, the key to winning a big tournament is staying away from the pressure. In my research I found that a lot of the tournaments won on this lake had been done so by fishing deep in the main river channel. I figured most anglers would do that same, and decided to fish shallow in places where I thought fish were less leery of biting my bait. Eufala had a lot of willow grass and so I focused on pockets of that in four to five feet of water. Any place where the grass came to a point was a good bet to get bit. I kept finding new water, trying not to overfish on a lake that sees consistent pressure, and it led to the biggest win of my career.