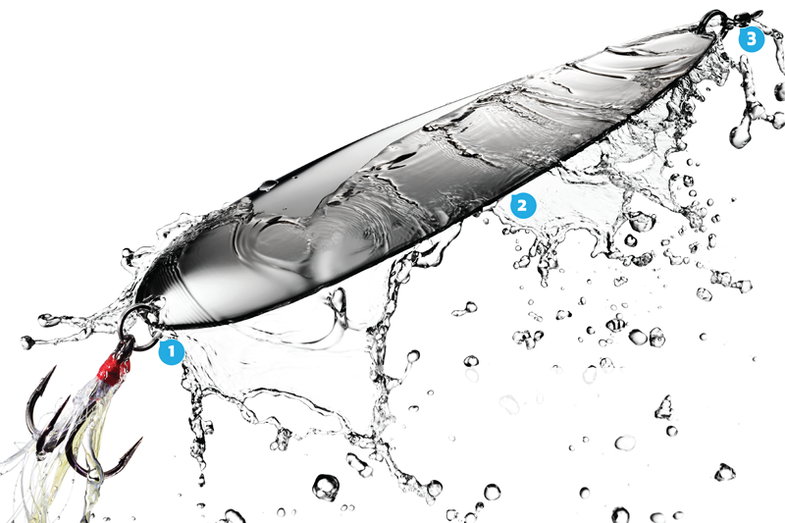 At first, the beat writers on the FLW professional bass circuit laughed. Then they quit laughing long enough to ask questions. And when half of the top 10 finishers at the Kentucky Lake tour stop last June revealed that they had used the slab of metal nearly 8 inches long with a 3/0 treble hook attached, a full-on bass-fishing craze ensued.

The Ben Parker Magnum Spoon ($17.49; nicholslures.com) takes super-sizing to an almost absurd level. Measuring 7 ¾ inches long and 2 inches wide, this 3-ounce brass slab was made to mimic giant gizzard shad. Flutter spoons, generally in the 4-inch range, have long been a standby for tempting bass that are attacking topside shad schools. But as Parker notes, tradition sometimes needs an overhaul.

“When you’re ledge fishing on the Tennessee River, you often see those big gizzard shad come up and jump,” says Parker. “I’d usually throw a flutter spoon, but I didn’t quite see the sense in throwing a spoon that’s half the size of the baitfish.”

About a year before the Magnum Spoon made its public debut on Kentucky Lake, Parker shared his concept with Brooks Woodward of Nichols Lures, who created prototypes that were flatter than the distinctly cupped flutter spoons. Parker initially thought the profiles were too shallow, but the bait delivered a surprising action.

Flatter down the center and with cupped edges, the Magnum Spoon hits the water, stalls at the surface, and rocks a few times until the heavier bottom end tilts downward and makes a sharp dive. After that initial drop, the spoon stalls against the water’s pressure, flattens out, rocks a few more times, and darts down again. This cadence repeats all the way to the bottom.

“If the motion stops before you feel the bottom bump, set the hook because it’s probably in a fish’s mouth,” Parker says.

Pickwick Lake guide Jason Lambert describes his aggressive retrieve as “a hookset on every rip.” Given the spoon’s size, Lambert uses a lob cast to reach suspended fish.

“Because of the spoon’s width, wind can make a big difference and you can drift as much as 20 feet off your [casting] target,” he says. “You can literally miss the school, and you have to wind up and cast again. Sometimes you can cast it on a lower trajectory, like a line drive, and punch through the wind.”

Lambert likes the spoon’s ability to reach suspended bass that are hard to target with traditional ledge baits. Whereas long-leader drop shots and wacky-rigged Senkos might coax a suspended bite, big experienced fish often snub such things. Rip a big gizzard shad impersonator past their face, and whether it’s aggression or the desire to quickly fill their belly with one large meal, the response is typically quick and decisive.

“When the fish are ganged up and feeding in creek channels in the fall, or when they first go out to the ledges in early summer, the spoon is very effective because bass are the most competitive fish out there,” says tour pro Randy Haynes. “They can’t stand for one fish to get something they don’t get”

Unlike the much-ballyhooed Alabama Rig, the Magnum Spoon fishing phenomenon is in its infancy, and it remains to be seen whether it is a passing fad or a franchise player.

Spoon-Fed
Here’s how the pros beef up to fish with heavy metal.

Bass pro Clent Davis throws his Mag Spoon on a 7-foot 9-inch, 6-power Phenix Recon rod. Made for punching, the rod can handle the spoon’s weight, while the parabolic bend facilitates the requisite long casts.

“The way that rod loads really lets me get that spoon out there well,” says Davis.

Randy Haynes uses a slightly longer rod paired with a 7:1 Lew’s Super Duty reel loaded with 20-pound fluorocarbon. The beefy baitcaster, he says, is necessary for handling the torque generated by that big slab of metal.

Pro-Talk
Magnum Spoon experts are few, but here’s how four of the best run these outsize bass baits

Randy Haynes
“I use it primarily as a search bait. I’ll see fish on my [sonar unit], turn around, cast the spoon as far as I can, and work it up.”

Ben Parker
“I’ll use it in the fall if the bass are chasing big gizzard shad on gravel bars that top out around 5 to 6 feet. The spoon is not weedless, so you can’t fish it around grass and wood. But you can sit in 10 feet and fish it relatively shallow across those bars.
“Cast out, count it down, and then use a twitching retrieve.”

Clent Davis
“On the retrieve, I just reel down to it as hard and fast as I can to get it up off the bottom while raising the rod tip high. If I don’t get a bite, I’ll drop the rod tip to let the spoon dart away and then repeat.”

Jason Lambert
“If you see fish 6 to 8 feet off the bottom, the Mag Spoon will catch them. It’s not like a swimbait, where they trail it. It’s just suddenly there and they hit it.”