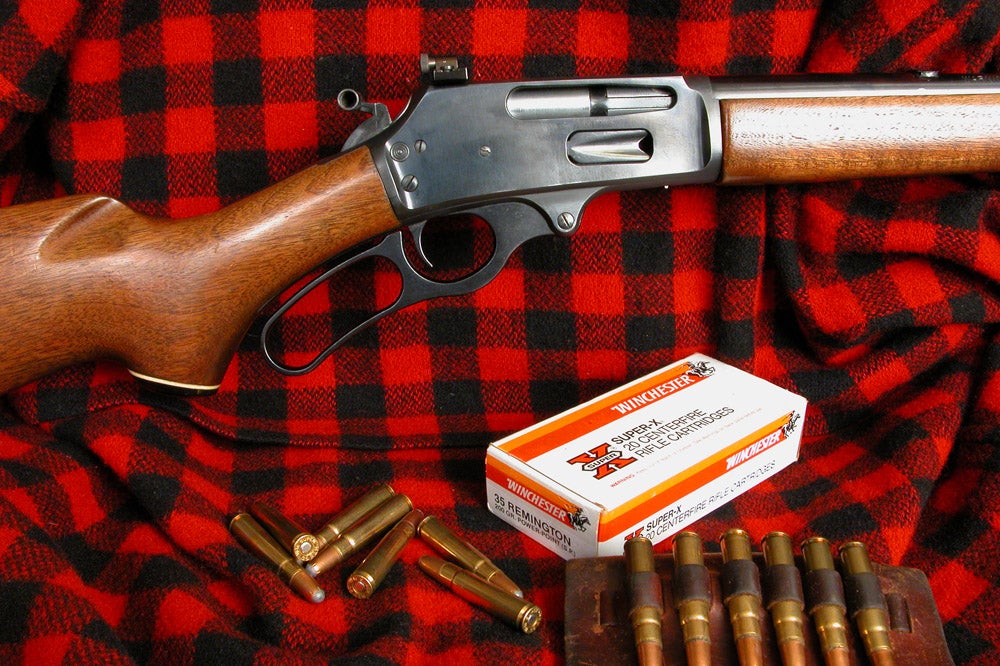 Best Lever-Action Guns of All Time

The best lever actions there ever were

Is apple pie more American than a lever action rifle? Nope. Apple pie dates back to 1381 in England. But, it does taste better than an oily rifle.

Lever actions are America’s rifle. It’s the gun that won the West and for a while lever actions were the kings of the whitetail woods. When we hear a cowboy talk about his Winchester rifle, nobody thinks “Model 70.” It was the rifle John Wayne and Gary Cooper used on the silver screen to bring truth and justice to the American West. The lever action is into its third century with little evidence that we have tired of them yet.

Here are my picks for the best lever-action guns.

The Henry wasn’t the first lever action rifle, but it was the first one to be commercially successful. The Henry was produced from 1860 to 1866. Chambered for .44 Rimfire, this gun changed the world and B. Tyler Henry’s rifle set the stage for all those lever actions to follow. With a 15-round tube magazine it was the rifle the Confederates called, “That damn Yankee rifle they load on Sunday and shoot all week.” Today, Henry Repeating Arms makes lever guns in everything from .22 lr to 6.5 Creedmoor. The Golden Boy rimfire line is probably the most popular and recognizable. They make for an extremely fun plinking and small game rifle, that are also perfect for getting a young shooter started. Another fantastic rifle in the Henry line is the Original Henry Rifle, which is made entirely in the USA. It’s made nearly identical to Henry’s 1860 patterns and patents. They’re a cool way to own a piece of history.

The world changed again with this rifle—the gun that won the West. The Henry rifle company had an investor, a shirt maker named Oliver F. Winchester who eventually controlled the company and renamed it to Winchester Repeating Arms Company. Their first new product was an improved version of the Henry, the Winchester 1866. The trouble was, that gun still used a rimfire cartridge and those newfangled centerfires were getting traction in the market.

The 1873 was designed for centerfire cartridges, initially the .44-40 or .44 WCF as it was called then. With the ability to reload the ammo, this gun contributed to western expansion. It was easy to cast bullets over the campfire and with a supply of primers and powder, to load the ammo. This allowed people to move and explore and still have fuel for their guns. The .44-40 and later introduced .38-40 cartridges were also popular in the Colt revolver so that a person could carry one supply of ammo for both the rifle and handgun.

Lever actions were pretty much delivery systems for pistol cartridges, until this rifle came along. This big Winchester was chambered for some serious cartridges, many of which had been the domain of single-shot rifles before. The 1886 was chambered for cartridges you probably never heard of like .40-82 Winchester and ones you might have, like the .45-70. It even could be bought in the .50-110, designed for hunting buffalo or a T-Rex if you happened to bump into one.

This rifle introduced America to the smokeless powder era as well as jacketed bullets and high velocity rifle cartridges. The Winchester 1894 was introduced along with two new cartridges, the .25-35 Winchester and the .30 WCF, later called the .30-30 Winchester. Perhaps you have heard of it?

The 1894 was also offered in some carry-over black powder era cartridges like the .38-55, .32-40 and a “crossover” cartridge, the .32 Special. Over the years there were have been a huge number of cartridges offered in the 94 from .38 Special to the .450 Marlin. Only the .30-30 went on to see great success. This rifle and cartridge proved to be the perfect marriage and Winchester 1894 became one of the best-selling rifles of all time.

When the New Haven plant closed in 2006, that was pretty much the end of the Model 94 as America’s lever action. Winchester still has a few made in Japan, which seems a bit sinful. It is interesting to note that they still offer the .450 Marlin, long after Marlin gave up on the cartridge.

Winchester’s first foray into making a shotgun followed their successful business plan of all things lever action. If their lever action rifles were popular, why mess with a good thing? This lever action shotgun was offered in 12 gauge and 10 gauge. They even had a riot gun, which was a precursor to today’s Tactical Shotguns.

Arthur William Savage was an interesting guy. He was an adventurer and a world traveler. He was educated in England and the U.S. and at one time he owned and operated the largest cattle ranch in Australia. He invented radial tires and the detachable box magazine for rifles. He built race cars and invented a torpedo. He started Savage Arms, which at one time was the largest gun maker in the country. He is best known for the Savage Model 99 lever action, a true game-changing rifle.

The 99 had an internal hammer for faster lock time and a rotary box magazine. That meant the rifle could use pointed bullets. It was also strong enough to handle modern high pressure cartridges. While the Winchester 94 in .30-30 was the gun for the masses, the thinking man used a Savage 99, usually in .300 Savage or .250 Savage.

A little-known fact is that Savage did much of the development work using the machinery at the Remington factory. Remington and Winchester were owned by the same company at the time, and it’s thought that Remington was being locked out of the lever action market by upper management. Perhaps if they had a little more foresight and had allowed them to dip a toe into the market the Model 99 would have had the Remington name on it and Savage Arms might never have existed.

The Browning Model 81 BLR (Browning Lever-Action Rifle) is a marvel of engineering. It runs on a series of gears and pinion racks that would make a steam-punker giddy with glee. The BLR has a removable box magazine so pointed bullets are not a problem and it can handle even beast-mode cartridges like the .338 Winchester Magnum. The list of cartridges offered runs from .22-250 though all the usual suspects, including the WSM line of cartridges. Mine is in .358 Winchester and I believe this was the last production gun chambered for that cartridge.

“Hey Dad, what’s the best fishing lure?” Young boys see the world in simple shades of black and white. There is a best of everything and Dads are supposed to know what they are, because that’s what dads do, they know things.

“Who is the most beautiful woman in the world?”

“Nah, I mean a famous person.”

“One that starts in the winter.”

That one should have thrown my dad because he was not really a gun guy, but he answered without hesitation, “the Marlin Model 39A lever action,” because that’s what his father, who was a gun guy, had always told him.

I had this conversation with my father in the early sixties. I believed it was the best .22 then and have had little reason to change my mind.

Introduced in 1922, the Marlin 39 and its various descendants set the standard for quality in a lever action rimfire rifle. This gun was still in production when the disastrous decision to move Marlin from its long-time North Haven, Conn., factory and relocate to New York pretty much killed the 39A.

While the Winchester Model 94 led the race, the Marlin 336 was hot on its heels. The 336 had side ejection which allowed easy mounting of a scope while the 94 ejected out the top, which meant a scope had to be mounted off to the side. The 336 was made in a bunch of configurations and chambered for cartridges from the .219 Zipper though the .356 Winchester, but its stock and trade was the .30-30 Winchester and the .35 Remington. There is no telling how much venison was made with this gun in those cartridges. You can still buy one today.

Don’t let the name fool you, this gun was introduced in 1972. Chambered for the .45-70, it revitalized that cartridge and made a new generation of hunters fall in love with lever action rifles. This big-bore lever gun gained popularity in Alaska for bear protection and spawned an industry that tricked out and modified the rifles. For a while you could get it in .450 Marlin, which was a modern day version of the .45-70 loaded right.

The Model 1895 rifles went away for a while after Remington bought Marlin and moved the plant, but they are back in production at the Remington/Marlin plant in Ilion, N.Y. Early guns out of this marriage had some quality problems, but those I have shot recently have been very well made. Marlin is even dipping into the idea pool from the custom guys with some modern designs. I expect this gun to stick around long enough for another generation or two to “discover” it.

What is the best lever action caliber?

The best lever action calibers for hunting are .30/30 Winchester and .45/70 Gov’t. You can readily find quality factory ammo and rifles in those calibers.

The two best lever action manufacturers are Henry and Marlin. They are quality guns that are made in the USA and offered at affordable prices.

Read Next: The New Marlin 1895 SBL .45/70 Rifle Is the Best Lever-Action in the Company’s History

These video tips will teach you to load, shoulder, and shoot your lever rifle even better. These guns can be fast, accurate, and tons of fun to shoot—if you know how to handle one properly.

Tap into your inner cowboy and learn how to run a lever-gun like Wyatt Earp, Billy the Kid, or Annie Oakley.