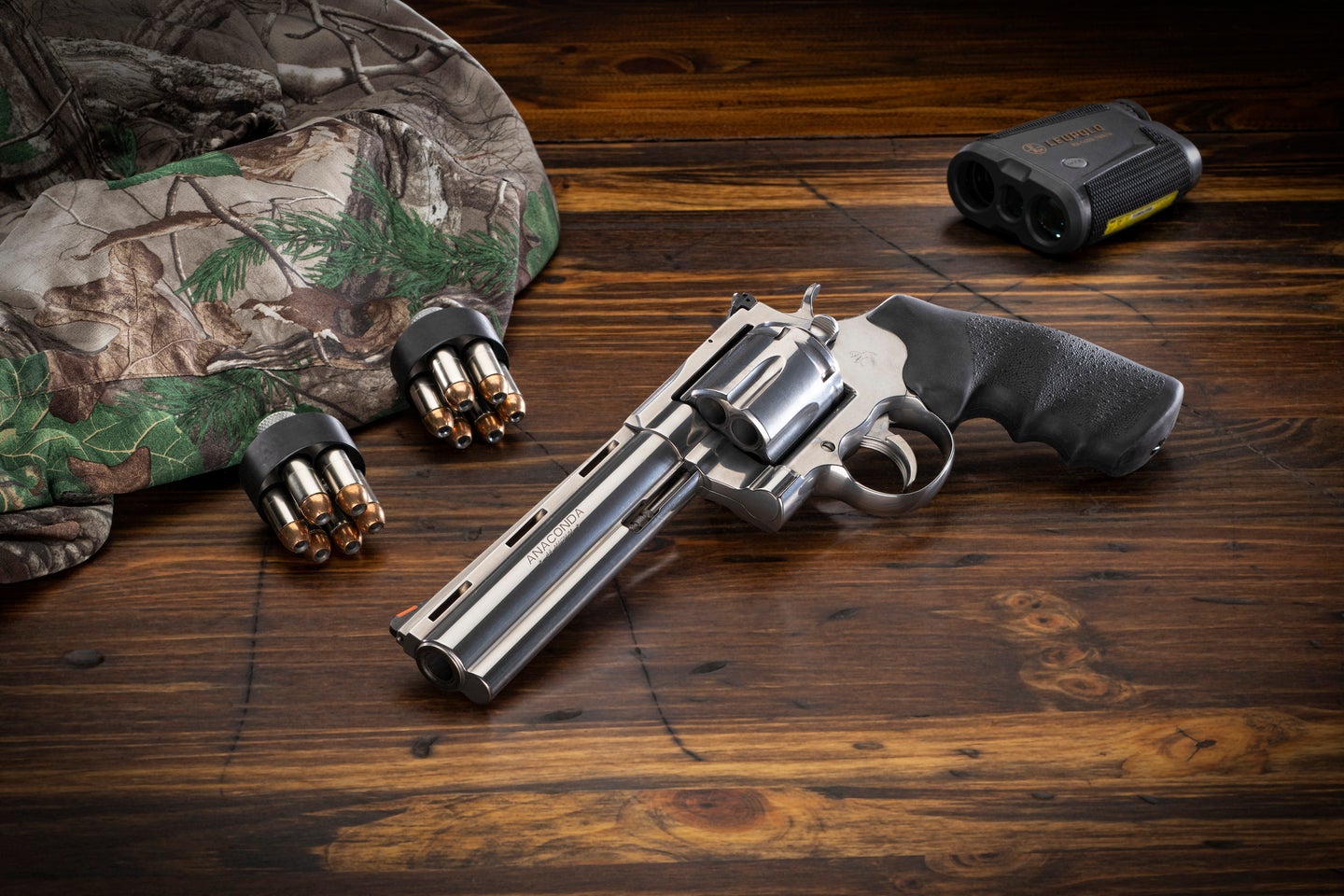 The reintroduced Colt Anaconda in .44 Rem. Mag. is a worthy addition to the "snake gun" lineup. Yamil Sued
SHARE

Colt revolvers have a very special place in my heart. I grew up shooting my dad’s 1969 Colt Cobra, which he carried until he passed and I inherited it. It was a tangible symbol of craftsmanship and reliability. When Colt started producing revolvers again in 2017, I was excited, and I have fired every single model they have produced since. Earlier this year, Colt reintroduced one of my favorites—the Anaconda.

Back in the early 90s, I owned a couple of very good .44 Magnum revolvers, so I ordered a 6-inch Anaconda in .45 Colt. It quickly became one of my favorite large frame revolvers. It was hefty, it was reliable and, of course, it was accurate. It was a certainty when Colt released the new Anaconda, I was going to get one.

The new Anaconda closely resembles its predecessor but features a couple of significant improvements. The 2021 Anaconda is constructed with new materials and processes thanks to advances in manufacturing techniques and metallurgy since Colt halted production of the revolver nearly three decades ago.

The new model is currently only available in the powerful .44 Magnum, which also allows for the use of the less powerful .44 Special ammunition. It comes in two barrel lengths, 6 inch and 8 inch, both which have a bright stainless steel finish. I opted for the 6-inch version, which for me points more readily and naturally than the 8-inch version.

Some of the new features introduced with the new breed of snake revolvers from Colt include user replaceable front sights, a thicker top strap that is drilled and tapped for mounting a scope rail, and new adjustable rear sights. The Anaconda also ships with Hogue rubber grips, which help dampen recoil. Even though Colt added these features to the new Anaconda, it still retains its original shape, so holsters are readily available and because the grip outline is the same, there are aftermarket options available from several vendors.

My first impressions of the new Anaconda were very positive. The fit and finish were outstanding. The way the crane locks into the frame, for example, is incredibly precise and tight. And when it locks in, it looks like that portion of the revolver is made of one piece steel rather than two. The fit is just perfect.

My first range trip with the new Anaconda was just a function test. I wanted to see how the new revolver operated in single and double action. Due to the current ammunition situation, I took some of my personal loads to the range—some mild rounds pushing plated 240-grain projectiles at 900 fps. That load is easy to manage and fun to shoot. I put the new snake through its paces, firing more than 100 rounds on an MGM steel silhouette at 10 to 15 yards, in both single and double action.

Shooting off hand at these distances was a blast—no pun intended. With these milder loads, the Anaconda was just perfect, stacking the rounds right on top of each other. Even though these “soft” loads are pleasant to shoot, they carried enough energy to topple the target. I had to place a large rock on the base of the target stand to keep it upright.

The one thing I don’t care for on the Anaconda is the serrated texture on the trigger face. It is needlessly sharp and a smooth trigger would feel and run better.

Now for the accuracy test. I know that this revolver is capable of delivering great accuracy at longer distances, but due to time and range constraints, I shot indoors at about 20 yards. I used a Ransom International Multi-Cal Steady Rest, a machined aluminum, fully adjustable rest capable of providing a super sturdy shooting platform. The ammunition I selected for this test was Federal Premium’s 240-grain Hydra-Shok JHP ammunition. This ammunition has a published muzzle velocity of 1210 FPS with 780 foot-pounds of energy. This is definitely not target practice ammunition.

Due to ammunition supply, I was only able to shoot four 5-round groups. The average group was 1.85 inches. For me, that is fairly decent result and I bet with practice I can definitely do even better. One thing I can say for certain is that the Hogue grips are a superb addition to this big snake when shooting full-house .44 Magnum rounds. I have fired similar loads in other revolvers with all sorts of grips and I found these Hogue grips to be comfortable to hold and very effective in reducing felt recoil.

If the stock configuration of this revolver isn’t to your liking you can customize it any number of ways. One thing I’ve done is to order a set of Pachmayr small presentation grips, which is like a blast of nostalgia from the late 80s and early 90s. They were the style of grip I had on my original Anaconda and even though the Hogues are probably better in most respects, I’m fond of the Pachmayrs for sentimental reasons.

Another custom touch I plan to add is a scope base. Even though I won’t be using the revolver for hunting, I would like to see what the Anaconda can do with an optic mounted on it.

Read Next: The Archon Type B is Not Just Another Plastic 9mm

After all the shooting I did with the new Colt Anaconda, I can only say that I really like it. It brought me back to the early 90s when the Anaconda freely roamed the shooting ranges all over America. I found this new model, with its modern features, to be a great improvement over the classic from the 90s. Whether you’re a target shooter, hunter, recreational shooter, or just looking for a self-defense handgun, the new Colt Anaconda is definitely a good choice for these tasks and more.