My favorite gun is an old beater Taurus 431 stainless steel revolver in .44 Special. I’m a cedar rat in... 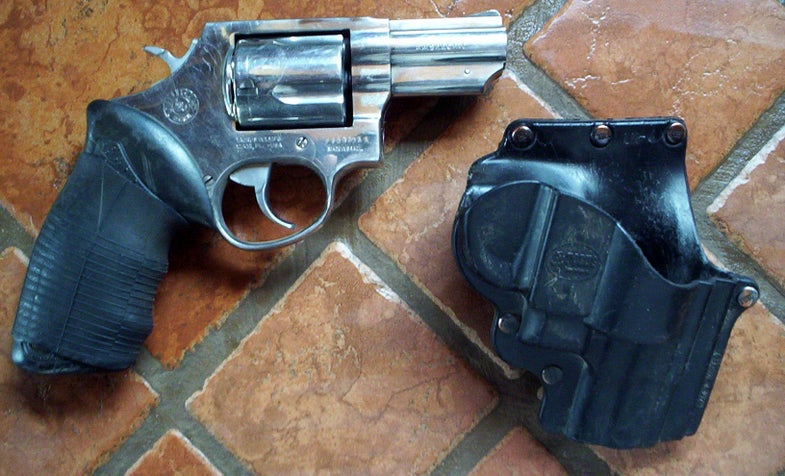 My favorite gun is an old beater Taurus 431 stainless steel revolver in .44 Special. I’m a cedar rat in the Southwest high desert—I guess you’d call me retired—and several years ago it became came clear that I needed something with more authority than my Marlin .22. So I traded a fellow some tractor work for this old revolver.

It was more of a mess than I’d anticipated. It needed a mainspring and a major cleaning before the cylinder would even spin, and then I had to do something about those silly little grips. Taurus sold rubber grips that fit well enough, but the seam wore a hole in the side of my finger during practice, so I covered it with a piece of tire tube and now it works fine.

I raise chickens for my food, and in the desert that rings the dinner bell for every predator around. I’ve got a couple of dogs that mostly keep them polite, but there have still been incidents. Plus packs of feral dogs form from time to time and though they don’t normally last long, they’re trouble while they do. So the Taurus goes on my belt when I put my pants on and doesn’t come off until bedtime.

I do chores for neighbors for my keep, and normally my dogs come with me. I guess the local coyotes knew that, because I happened to be home in my cabin without the dogs one afternoon when I came out and met a surprised coyote that had come to say hello to my hens. I guess she figured if the dogs weren’t home, nobody was home. Coyotes are pretty smart as a rule, although this one wasn’t. After I killed it I didn’t have any more trouble.

Then one time my boys picked a fight with a big badger in a rocky gully, and by the time I got there the badger was just about insane. I figured I’m responsible for the dogs’ welfare and not for that of the badger, so I shot it between the eye and the ear and that ended the matter.

And although the boys are good about leaving rattlesnakes alone, now and then one does need to be taken care of when I don’t have a shovel handy, so the .44 does that job too. (Shovels work a lot better on snakes than pistols, to be honest, but a .44 hollow point gets it done.)

There’ve been a few other incidents over the years, but not too many. I don’t like to kill animals I’m not going to eat, but we don’t live in a park and sometimes it has to be done.

The .44 Special isn’t as popular a cartridge as it was when I was young, which I learned to my dismay. Hardly anybody sells ammo for it around here. I load my own on a neighbor’s press, and over the years friends have given me plenty of brass they don’t use anymore. I send away for 200 grain cast flatnose bullets and use them to keep in practice. But I keep the pistol and my speed strips loaded either with CCI Blazer 200 grain hollowpoints or more recently with some Hornady 165 grain FTX that a friend gave me. Haven’t had a chance to use one of those on a varmint, but the time will probably come.

The Taurus is scratched and beat up, and I guess people might sneer at it, but since I fixed it it’s reliable and always puts the bullet in the right place. It’s the gun that gets me out of trouble when trouble calls for a gun, so I guess that makes it my favorite.