If there’s such a thing as an “anytime/anywhere” bass lure color, then green pumpkin is it 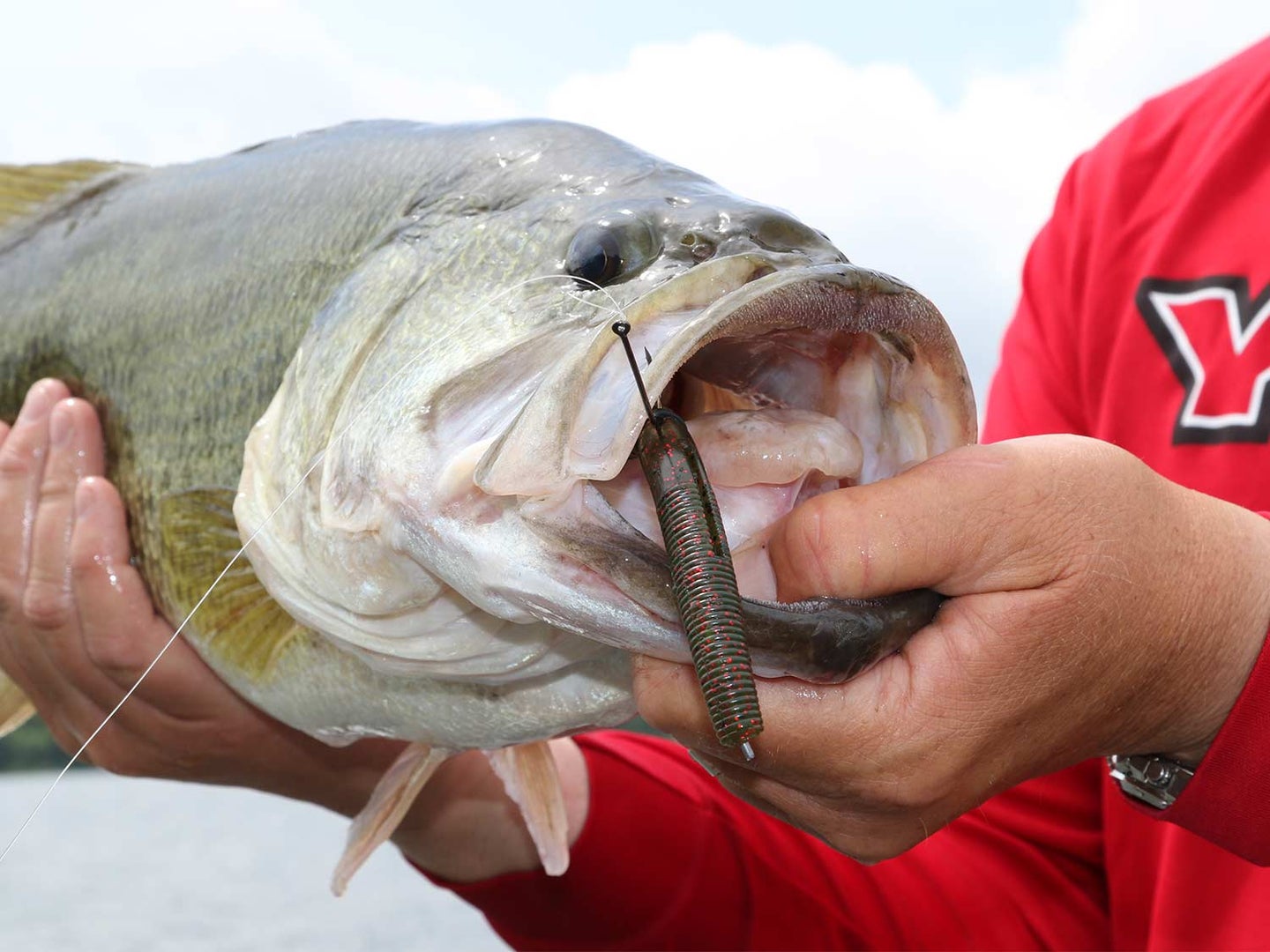 There are only a handful of certainties in bass fishing. For example: When you ask someone if they can throw a baitcaster and hear: “You mean the one with the button?” That’s a hard “no.”

Equally bankable is the likelihood that if I fail to retie my obviously frayed fluorocarbon after that close encounter with a dock post, my next bite will be my nearly personal best, and I will watch that fish swim away when my line —and heart—breaks.

Granted, there is some degree of case-by-case variance here, but here’s a rock-solid statement that needs no setup: I can take a green pumpkin-colored (GP), soft-plastic bait and catch black bass anywhere they exist. That could be largemouth bass (Florida-strain or northerns), smallmouth, or spotted bass. But if you had to choose only one color for the remainder of your life, this greenish/brown design with the black specks is a safe bet.

Now, if you’ve already started writing the email, take a break and consider this important framing statement: We are not saying that green pumpkin baits are the best choice for every situation; nor are we saying other colors won’t work in scenarios in which GP also produces.

Nevertheless, green pumpkin is the most universally versatile color for soft-plastic baits, and there are a few compelling points to substantiate this premise.

If we’re being honest, much of the fishing lure industry aims to catch fishermen, as much as fish. Each year, the fishing industry presents some version of the latest-and-greatest bait, lure, or color that spurs many to buy stuff they’ll rarely use.

That’s not the case for the green-pumpkin color. For some shapes that’s maybe so, but the color’s long-standing relevance defies trends and needs no hype.

“With every single bass bait we offer, green pumpkin is the first thing we list when we’re prototyping,” says Mark Sexton, manager of research & measures for lure giant Berkley. “It’s probably the most asked for bass color.”

Ron Colby, VP of Operations for Gary Yamamoto Custom Baits, agrees and notes that green pumpkin is the company’s number one seller in the majority of its baits. The only exceptions are Yamamoto’s shad-shaped baits, but we’ll look at profile and presentation considerations in a moment.

For now, consider the GP appeal.

2. It Matches The Hatches

Perhaps the most common defense of green pumpkin’s dominance is its similarity to natural forage. Bluegill, sunfish, and various panfish typically sport some level of darker green paint jobs, and a lot of baitfish have this color along their backs. Possibly the most prominent existence of the green pumpkin tone is found in a creature that does its best to hide amid rocks and gravel—and no visible crawfish is safe from a hungry bass.

In addition to the standard deal, green pumpkin variations range from high-end laminates and blended body colors to the addition of metallic flakes—red, green, blue, purple, copper, and mixes with names like Green Pumpkin Candy and Green Pumpkin Neon. Some of this can be traced to angler preference, but it’s all linked to some level of rational choice based on water clarity and/or forage coloration.

“A lot of it is just game-time decisions while you’re fishing,” says Sexton. “You pull up to one part of the creek and find a muddy bank, so you want to get something with a little more flash. When light goes through that muddy water and hits that metal flake, it throws off a shine, and that can be the difference between one bite and five.”

“Our most popular variations are green pumpkin with purple and green flake and then green pumpkin with copper and purple flake,” says Colby. “Light reflection is a big part of this. Sometimes, you throw this bait and the copper, green, or purple will be more reflective—one of those colors will trigger the fish.”

Read Next: Fill Your Tackle Box with These 16 Proven Lures for Spring Bass

“If you get a lot of bluegill spawning, they’ll have more orange coloration, or molting crawfish will have a lot of orange on them,” he says. “When they’re more of the standard color, the greens and purples seem to take effect.”

Travel the country, and you’ll definitely find regional color preferences; generally some combination of local conditions and traditional use. Across the board, Colby says GP will always hold a prominent place in the mix.

“In the Southeast, Junebug and black/blue are popular, but green pumpkin will always be in the top-five,” says Colby. “On any given day, one color might outsell another, but any of our colors that have a green pumpkin base—it just sells.”

Sexton says the scientific evidence on bass vision is not thick, and some of the fish’s response may be linked to what their brains interpret as much as what their eyes can handle. Still, clinical feeding trials have shown that bass do have a decent amount of color vision.

“It’s a little narrower in visible spectrum than the human eye,” says Sexton. “Some say they can see down to 400 nanometers up to about 700-750, so about the same range of color we can see. We do know that bass can discern the difference between red and green very well.”

Sexton says studies have shown that bass can see and distinguish red and green very well. Perhaps surprising to some, he references feeding studies, which have found that bass cannot discern black from blue or chartreuse from white. That’s certainly no discount to these popular bass colors, but observations give a nod to green pumpkin’s solidity.

Read Next: These 29 Baits Caught The Most Fish During the Bassmaster Classic

“My theory is that bass can tell the difference between green and black, so that provides contrast,” says Sexton. “When you have the true green pumpkin with the black fleck, they can see the difference, and I think that looks more natural, so in clear water environments, it looks like something they’d eat. In dirty water, it would show up darker, but they can still tell the difference between the green and the black. So, the green pumpkin color provides contrast, and it looks natural.”

Sexton also notes that green pumpkin holds up well in a respectable range of scenarios. Noting that it’s right about dead middle of the visible spectrum for fish, he calls it the all-purpose color—subtle and natural in clear conditions, distinctly contrasted in dirty water.

“Across the country, green pumpkin is fished from the clear water of California, to the swamps of Louisiana,” he says. “It works everywhere.”

GP’S U.S. popularity extends across our northern border. Based in Caven, Ontario, Bassmaster Elite Series pro, Cory Johnston calls green pumpkin the most popular color for smallmouth bass and an all-around versatile option that mimics everything from gobies, to frogs and all the dark-backed baitfish. Shinichi Fukae, who competes on the Bass Pro Tour and spends the off-season in Osaka, says the same for Japanese fisheries.

Notably, Carl Jocumsen — the first Australian angler to win a Bassmaster Elite event (Oklahoma’s Lake Tenkiller, September 22) — says green pumpkin holds a lower, yet steadily increasing, position in his homeland’s plastic bait options. Again, indigenous forage has a lot to do with it, but the tendrils of American bass fishing preferences reach far.

“It’s more baitfish style colors in Australia,” says Jocumsen. “We have crawfish—we call them yabbies, redclaw, or blueclaw—but they are usually black; not so much green in color.”

Despite its impressively diverse applicability, some presentations tend to favor green pumpkin more than others. Anecdotally, I’ve caught bass by dead sticking a green pumpkin stick worm, and I’ve caught them twitching the same worm at a brisk pace. Practically, though, there is a rationale for how green pumpkin is likely to perform across various bait styles.

“It seems to err toward the slower baits where you’re flipping, pitching, and dragging; whereas your swimbaits tend to be more of the pearl belly and some (darker) back,” says Sexton. “There aren’t a lot of fish that are green pumpkin from top to bottom, so I think this color is definitely used more in finesse techniques and the slower presentations that look like a crawdad crawling along the bottom or sitting up in a defense mode.”

Bassmaster Elite angler Mark Menendez throws plenty of green-pumpkin worms, but his go-to plastic bait is a Strike King Rage Craw. This shape works in a Texas-rigged scenario, it makes an effective jig trailer for pitching to laydowns and brush, and the kicking pinchers create an enticing display on the back of a swim jig. For all of these, the crawfish and bream ruse justifies green pumpkin as a common color choice.

Worth noting: Jig/swim jig trailers work in concert with a skirt, whereas a soft-plastic swimbait generally stands alone. The latter’s wobbling, rolling motion gives fish a good look at the back and belly, so a solid green pumpkin form may be less effective here than with a jig whose overall color scheme is meant to mimic crawfish or bream.

Ever wondered why bream rank so highly on the bass diet? Well, notwithstanding the nutritional value of a meaty meal, a longstanding bass-bream feud makes history’s Hatfield-McCoy thing look civil.

Quick and numerous, these panfish have a taste for bass eggs; so during the spawn, the aggressive nest raiders present the most consistent threat to spawning success. Once the eggs hatch, tiny bass fry are easy pickings for the opportunistic predators.

Green pumpkin resembles a bream. And bass want to kill every bream they see.

Because bream tails often show a hint of chartreuse accents, some bait makers offer green pumpkin worms with chartreuse tips. When he needs to dress up a standard GP bait, Menendez dips the tips in “Dyeing to Fish” chartreuse dye.

“I’ll dip my baits into the jar, but if I don’t want a significant amount, I’ll become a little bit of an artist,” says Menendez. “I will take a Q-Tip and make very subtle color additions to the tips of a Rage Craw’s pinchers, or on the sides of the pinchers.

Artistic appeal may be the deal closer, but the sale starts with the most popular bass color of all time—green pumpkin.