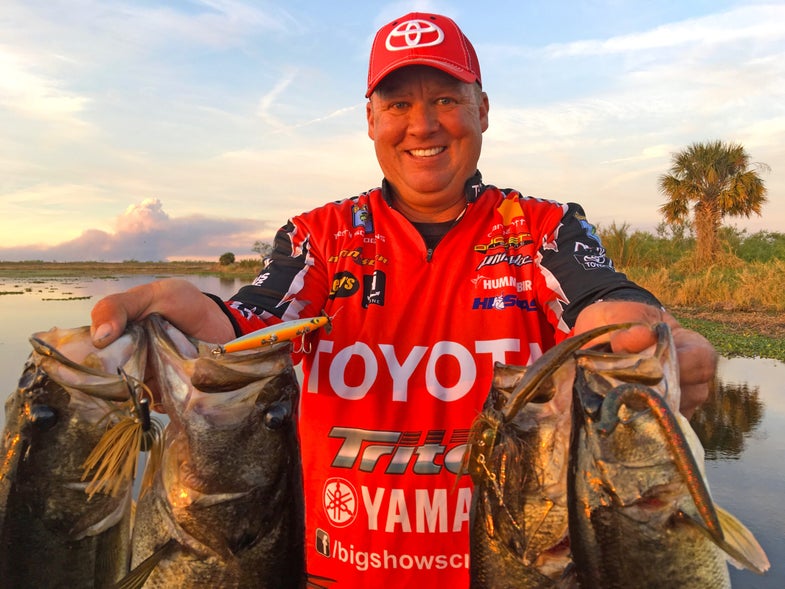 Terry “Big Show” Scroggins won his first bass tournament in Florida at the age of 12. And he’s since won $2 Million dollars as one of the most decorated anglers in the history of the largemouth-rich Sunshine State.

Amazingly, he doesn’t have a lure sponsor. So Scroggins’ willingness to choose four lures that no bass angler should be without in Florida, comes with a measure of credibility as heavy as the limits of bass that fill his livewells.

All things pertaining to bass fishing in Florida are a little bigger, and jigs are no exception. Scroggins reaches for either a ¾ or 1-ounce flippin style jig when dissecting reeds, cattails, and lily pads. For Florida’s abundant thick vegetation, he’s always sure to use a jig built with a double weedguard.

No surprise his two favorite colors are green pumpkin or black/blue, and he uses a Zoom Big Salty Chunk for a trailer.

“This is my search bait,” says Scroggins. “It’s hard to beat a chatterbait when you’re trying to cover lots of water.”

Scroggins loves a ½-ounce ChatterBait for making long casts over expansive fields of submerged hydrilla at places like Toho, Rodman, and Okeechobee, but says a chatterbait is also a great tool for hopping and swimming along river bottom shell beds in 4 to 8 feet of water.

He trims the chatterbait with a Zoom Super Fluke Jr. as a trailer, and casts it on 15-pound fluorocarbon.

This wooden topwater lure has gained a legendary reputation among Southern bass anglers, and there are few places where it shines brighter than in Florida. Propellers at each end create plenty of fish-attracting commotion; while at the same time restrict the lure from moving too far forward too fast. This allows it to stay in one spot, and tease big bass into biting.

“That lure has been around longer than me, and it’s still catching them,” says Scroggins. “We call it “The Donkey” because it works slow and steady. A lot of times, you’ll see big bass swirl right under it for a second or two before they decide to smash it. It’s one of the most exciting lures you’ll ever tie on.”

Like a lot of topwater lures, the Devil’s Horse draws most strikes during low light conditions, but there are times when they’ll eat it all day. Scroggins’ favorite Devil’s Horse is the 3/8 ounce and features chrome sides, a black back, and orange belly. He fishes it on 15-pound monofilament, not braid.

Gary Yamamoto invented it, and in Terry Scroggins’ opinion, the 5-inch version of this revolutionary soft-plastic bait is still the best one to buy.

“There’s probably not a soft-plastic lure in the world that will get you a few critical bites when you need them most,” says Scroggins. “Just make sure you give the fish a couple good seconds to eat it before you set the hook, or you’ll miss a lot of bites.”

It’s also a versatile lure. Some choose to Texas rig it with light 1/16- to 5/16-ounce weights. Others rig it ‘wacky’ style with no weight at all, while some choose to insert a nail weight into the least pointy end of the ballpoint pen-shaped lure.

Scroggins throws his Senkos on 12-pound-test fluorocarbon, and says you can’t go wrong with various shades of green pumpkin in clear to slightly stained water, but opts for junebug or black-blue if the water is off-colored.