Catch more bass by fishing after dark and lighting up the night. 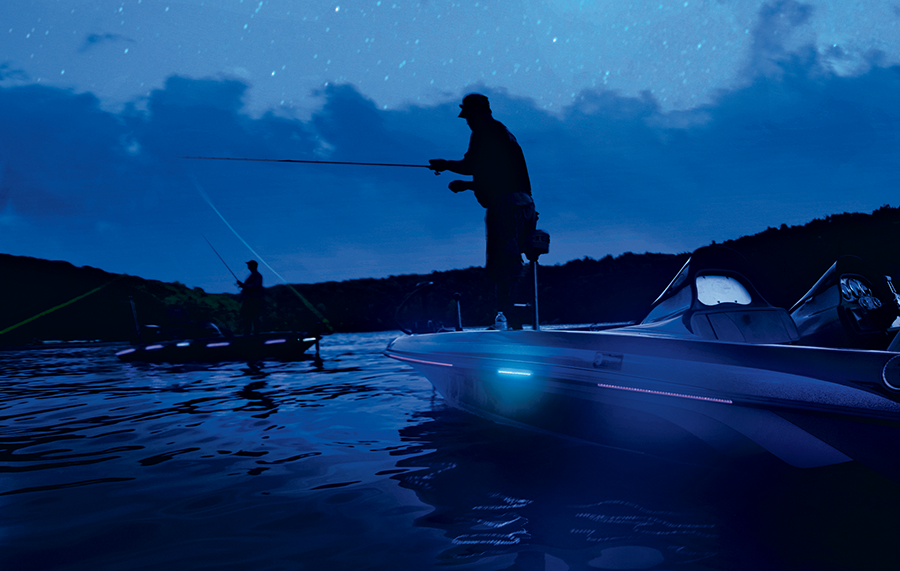 The hot and humid months of summer always seem to transform bass fishing lakes into a downright mess—­impoundments chock-full of supersize cabin cruisers, runabouts, and jet-skis. Once the sun goes down, though, not too many are night fishing. The crowds generally clear out and bass that were previously inactive begin to feed heavily again.

A few modifications to your tackle and gear are all it takes to get things cranking from dusk till dawn. When the sun goes down, flip on the lights and get in on summer’s best bass fishing.

Add a Black Light to Your Boat

One of the first steps in creating a high-impact night fishing arsenal is to spool up with clear/blue fluorescent monofilament line. This type of line is inexpensive and lights up like a glowing blue laser on the surface when you use it with a black light—which is my secret weapon. Currently, there are a variety of black lights to choose from. One of the most innovative and convenient models is the new Nightfishion Plus (nightfishion.net).

This complete customizable black-light system fits directly onto your boat’s rub rail. During the day, it’s virtually undetectable, but with a flip of a switch at night, nearly 360 degrees of lighting illuminates every possible casting angle. Plus, it has a dimmer switch that allows you to adjust the intensity based on the moonlight and fishing conditions.

Tip: Avoid muddy lakes when night-fishing. Clear water with a visibility of 2 to 4 feet is ideal for night fishing for bass.

When daytime temperatures heat up, bass generally suspend deep off of breaks in points, ledges, and submerged islands or humps. As temperatures drop at night, they move up into the shallows to feed. I like to greet them with loud and bold lures.

A large single Colorado-blade spinnerbait rigged with a rubber imitation craw or chunk trailer puts off a great deal of fish-enticing vibration and can be fished at a variety of depths. Another deadly nighttime lure is a standard jig tipped with a chunk trailer that directly mimics the natural actions of shad and even crayfish. Crawling the jig and popping it across the bottom imitates crayfish coming out from beneath their rocky hides to feed at night. If bass are aggressively feeding on shad, switch to a swimming jig.

Under the right conditions, nothing turns on the bite, or builds more excitement, better than surface lures such as prop-baits, Jitterbugs, and buzzbaits. A big bass smashing a topwater on a dead-calm summer night is what fishing dreams are made of.

Match Lure Color to the Moonlight

Moon and cloud cover should guide your lure color selection. On pitch-black nights with little to no moonlight, go with solid black, brown, or blue. Under a bright moon or on a clear, starlit night, switch over to loud color combinations, such as green/orange or even red/chartreuse. On partially cloudy nights, go with red/black, blue/black, or green/black.

Night fishing for bass is electric. First there’s the static “zing” of the line as you cast, followed by the silence that leaves you tensed, listening for the “kerplunk.” Next your fingers begin to turn the reel crank and you feel the bait moving, pulsing through the water. It’s then that the unforgettable tingle–the anticipation of a hitÃƒÂis carried to your fingertips. You’re charged for the strike.

Summer night fishing for big bass has long had a cult following in the South, where daytime temperatures routinely edge into three digits, rain-forest-like humidity drains even the most determined anglers and jet skis run rampant. But the South is not the only place where nighttime bass fishing is productive. When the weather heats up, big bass everywhere await the cover of darkness to feed.

Scoring the big bite on bass after dark, however, demands a fresh angling perspective. Catching largemouths or smallmouths on a third-shift schedule requires an intimacy with the fish’s nocturnal haunts and habits, some specific gear items and an ability to read subtle changes in bottom composition and bank slope through your rod. Here are the strategies of three hard-core bass fishermen who prefer to fish by moonlight.

Christian has introduced hundreds of clients to the mysterious world of nighttime bass fishing in his 25-year career. His preferred after-dark structure for both largemouths and smallmouths is the offshore hump. Christian likes humps because they’re harder to locate than points, which means they’re not as apt to be hammered by other anglers, and because they pull in big bass from a wide area.

“Picture a hump as an underwater oasis,” Christian says. “The best summer humps top out at around ten feet; I avoid the very shallow ones because they tend to attract smaller fish.”

In hot weather, schools of threadfin shad spend their days gathered around main-lake channel structure that may be in water 40 or 50 feet deep, Christian says. To intercept the baitfish, bass suspend off long points in this deep water, conserving energy while waiting for forage to happen by. But at night, a different scenario unfolds. Many of these bass slide up onto nearby humps to hunt for crayfish, which emerge in the dark to feed.

Fishing a hump at night requires stealth. Christian approaches the structure with his trolling motor or drifts within casting range if there’s sufficient wind. He makes a long cast with a bottom-bumping crawdad imitator (like a jig with a pork-frog trailer) to the top of the hump. At night he uses the reel handle more than the rod to move the lure, so that the jig maintains contact with the bottom as much as possible. This simulates a crawling crayfish best.

Christian uses bait colors that have just enough contrast to allow bass to distinguish the crayfish lure from the bottom. His favorite color choices are a black jig with a brown pork frog and a purple jig with a red frog. He does not use brightly colored lures at night.

Christian rigs his boat with black lights, which illuminate fluorescent line above the water, helping him to detect subtle bites. “If you feel the bass pull, it’s too late, he says. “The instant a fish detects pressure, it spits out the lure. Black lights let you see the line move before you feel the fish, and before the fish feels you.”

Ingram is one of the top money-winners on the professional bass circuit. But in hot weather, you can usually find him on Pickwick Lake at night, fishing for smallmouths. He’s caught some whoppers from this riverine impoundment, including a handful exceeding eight pounds. Charlie’s secret: fishing spinnerbaits across shallow structures that are swept by a current.

At night, Ingram targets gravel bars that are peppered with stumps near the old Tennessee River channel. “These bars slope down to about 10 feet and then drop off quickly,” he says. “When they pull water (through the generator turbines) at the dam, the current draws plankton into slack- water pockets on the bars and shad move in to feed on the plankton. Sometimes the bars are jammed wall-to-wall with bait until a wolf pack of big smallmouths shows up, that is.”

Ingram’s favorite night lure is a quarter-ounce spinnerbait with a single No. 3 blade and a red and purple skirt, dressed with a red pork frog. He makes a short cast onto the bar, lets the lure settle to the bottom, lifts the rod tip six inches, lowers it, reels up the slack and then lifts it again.

“Sooner or later, a big smallmouth will nail it. They travel in schools at night and can be incredibly aggressive. I’ve had ’em rip the rod right out of my hands,” says Ingram.

When the current shuts off, however, Ingram’s shallow technique evaporates as the bronzebacks slip back into the sanctuary of the deep river channel.

McClintock fishes Dale Hollow Lake, a 29,000-acre highland reservoir known for big smallmouths, after sunset. Its scenic shorelines and exceptionally deep, clear water make the lake a top choice for summer vacationers, who churn it to a froth in houseboats. After sunset, though, Dale Hollow is a night-fisherman’s paradise, with more points, humps and drop-offs than you could hope to fish in a lifetime.

Because of Dale Hollow’s extreme clarity, light penetration allows lush weed beds to grow as deep as 35 feet. With the lake warming into the mid-90s by August, the biggest bass seek the coolness of deep water and refuse to move shallow, even at night. Instead, they stick to the deep edge of the weeds, where they find plenty of baitfish and crayfish.

McClintock targets weed beds that are situated near a sharp descent into the lake’s cavernous river channel. A weedy ledge that cascades down from 30 to 80 feet deep is best. Fast-dropping main-lake points with grass on them are also good spots to fishÃƒÂlong, slow-tapering points typically attract smaller bass.

“Changing lures in the dark can be painful, so I pre-rig several rods with a selection of jigs and spinnerbaits,”

McClintock says. “I’ve caught a lot of wall-hanger bass on spider jigs at night; these have long plastic legs that mimic the pinchers of a crayfish, and a soft collar around a weighted head that wiggles and feels alive when a bass chomps down on it. Heavy spinnerbaits, up to an ounce, are also good. There aren’t many other lures you can count on at night in the 30-foot zone.”

McClintock finds that, at night, smallmouth bass suspend on the tops and outer edges of weed beds, while largemouths are more likely to be buried in the vegetation. He starts by combing the grass with a spinnerbait that has a big No. 7 blade, reeling it slowly and steadily across the cover.

“Some nights, they just won’t hit a spinnerbait. When that happens, I’ll switch to the spider jig and crawl, bump and shake it through the vegetation,” says McClintock. “You need a stiff graphite rod to feel a light bite in super-deep water. I like a seven-foot bait-caster, because it moves a lot of line when I set the hook and enables me to power a big fish out of deep grass. But you’re not gonna land ’em all. I’ve had bass on at night that have literally towed the boat around before they busted off. But then, I guess that’s what keeps me coming back.”