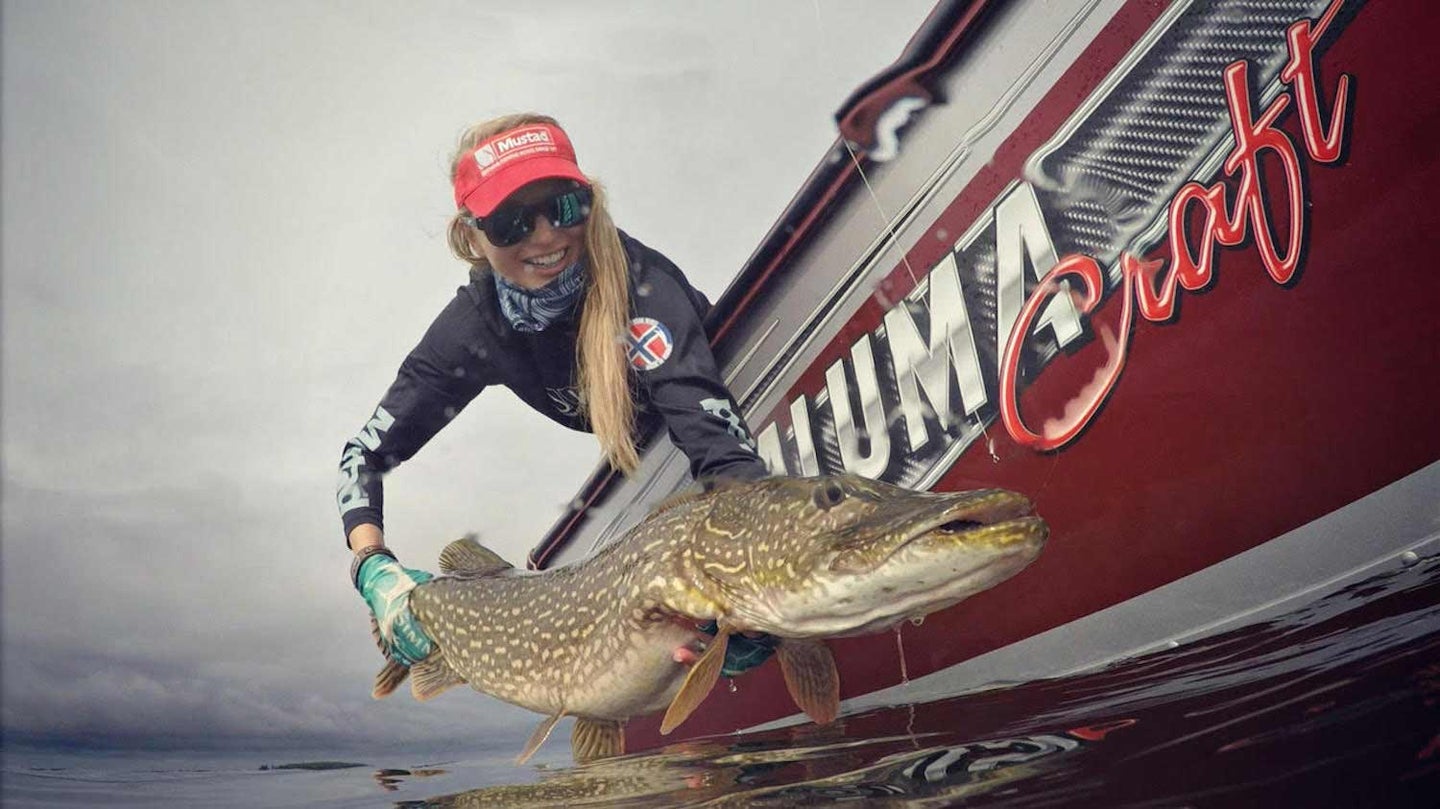 As Fall tails off into Winter, Rebekka Redd starts to target these big northern pike with a slower retrieve. Courtesy Rebekka Redd
SHARE

While you’re preparing to feast on Thanksgiving dinner, the fattest muskie and pike that swim in your local river are moving to the shallows for a feast of their own.

This season of really big, really aggressive esox is short. Fly fishing guides Rebekka Redd, Luke Swanson, and Harry Desmond have learned to take full advantage, tailoring their tactics for this special opportunity at a giant. Use their tactics to find a monster before ice-up, or spend the rest of the dark, cold Winter with regrets.

Slow Down When the Temperatures Drop

“Cooling temps bring on ‘survival mode’ in pike, meaning they are aggressively feeding in preparation for Winter,” says Rebekka Redd, of Rebekka Redd Fly Fishing. “A slow presentation with large flies has proven to be successful.”

That survival mode in pike and muskie has them zeroed in on baitfish, trying to fatten up for the winter. Your fly should behave like their forage. “Essentially your fly is mimicking cold temperature affected bait fish, meaning they are lethargic,” says Redd. “Slow your retrieves and lengthen your pauses.”

Redd says to watch the water temperatures and wait for the golden window. “With water temps sinking past 50 degrees Fahrenheit (10C), pike will leave their summertime locations as weeds begin to die off,” says Redd. She recommends bringing a water thermometer every time you hit the water, unless your fish finder displays temperature for you.

“Bait will start to move into new spots, and where the bait goes, pike will follow to maintain a steady source of food,” says Redd. Instead of fishing near weed beds, like you would in the summer months, look for rocks or wood that are close to deep water. “Vegetation can still be one of the targets in fall, however they should be only healthy green plants, and located near deeper water,” says Redd.

Read Next: How to Catch Big Pike in the Fall

The same heavy esox fly setup you’d use throughout the summer should work just as well through Fall. Redd recommends a large arbor reel with a smooth drag, spooled with a decent quick-sinking line. “250 to 350 grain for getting the fly down to deeper dwelling fall pike,” she says. “There is no need to over complicate the line setup for pike. For a leader, use 7 ½ feet of 20- to 30-pound flouro to 1 ½ feet of 12- to 30-pound steel (coated) leader to the fly.” You can also look for ready-made 20- to 30-pound tapered fly leader for pike and muskie in your local fly shop.

“My successful flies vary from 6 in to 9 inches long,” says Redd. “I tend to use bright white and red streamers with a heavy dumbbell head.” Tie on flies with 2/0 to 6/0 hooks and throw a variety of colors, or match your local baitfish to trigger aggressive strikes.

Throw Your Biggest Flies of the Year

When Minnesota guide Luke Swanson, of Livin’ the Dream Guide Service, isn’t chasing big muskie, he’s chasing big bucks. The shoulder season for muskie almost lines up with hunting season, which explains why Swanson talked to me with bloody hands, while processing a deer. As soon as he sees the water temperatures start to drop late in the season he ties on giant, weighted flies designed to trigger aggressive predatory strikes from muskie.

“We’re going bigger,” he says. “Bigger gear, bigger flies.” Throughout the summer, Swanson throws 10-14” flies, but in the later shoulder season muskie start to look for the biggest flies in his box. “In winter, we’re going to the 14-20” fly,” he says.

Read Next: Pro Tips for Catching Muskie on the Fly

He agrees with Redd that you should slow down your retrieve, but he further stressed the pause. He throws flies designed to trigger reactions on the pause, or on the drop in deeper water. “A lot of our flies have weight in them,” he says, “anywhere from an eighth to a quarter ounce of tungsten. You want to get them down to the fish in those deep holes and deep drops.”

“And you’re changing up that pause,” says Swanson. “It can be a quick half-second pause or you can just let it hang for five, six, seven seconds. Just change it up.” Swanson says muskie and pike are looking for erratic behavior in their baitfish, so you don’t want your retrieve to be predictable. “Switch up that timing, as well as your strip length,” he says. “Don’t make the same foot-long strip retrieve the whole way back; as you change that up it’s unpredictable and you can get a reaction out of that fish.”

Once you trigger a reaction strike from one fish, start looking for the next one in the same, or a similar, spot along the river. “When you find one fish it’s not the only one right there,” says Swanson. “There’s a reason that fish was there and it’s not alone.” As soon as Swanson catches a fish, he marks it on his fishfinder to hit the same spot again later, or sometimes right away. “Swing back and fish it again,” he says.

Read Next: You Should Flyfish for Muskies—Here Are 3 Tips to Get You Started

Big fish will be attracted to specific structure along the river, and if you’ve found one fish, look for the same structure in other areas to find more. “Take where you found that fish and then try to replicate it––if it was a six-foot-deep gravel bar on a nice big outside river bend, go find the next six-foot-deep gravel bar on a big outside river bend,” says Swanson. “See if those fish are stacked in the same places, because usually they are.”

Open Up Your Figure-Eights at the Boat

Harry Desmond, owner of Berkshire Rivers Fly Fishing, spends most of his Fall season before ice-up targeting the biggest pike that swim in Massachusetts. He considers himself lucky that he can fish for pike all winter long, as Massachusetts’ season never closes, even if that means only one or two fish a day during the coldest months.

Pike can be aggressive as the temperature drops, but the closer Winter gets, the more lethargic the fish will act. “Never give up on the fish,” says Desmond. If a pike swipes at your fly, don’t think you blew it with that fish. “That doesn’t mean they’re done, it just means they’re lethargic when they’re not coming to the fly super fast. Throw it back in there. Those fish will come back one, two, three, four times. They’ll eat a fly, get unhooked, and eat a fly again.”

To convince those lethargic fish to bite, Desmond relies on his figure-eight at the boat. As the temperature drops, and fish need a little more convincing, he tweaks his figure-eight to keep them interested. “Slow it down,” he says, “and make your loops on the figure-eight really big.” Desmond says he gets down on his knees in the boat and jams his rod down deep in the water.

“Let’s say the bow of the boat is pointing to the middle of the figure-eight,” he says. “I’m trying to make those loops go all the way around down the port side of the boat, transition into my other loop at the front of the boat, and then go all the way down the other side.” Not only does this keep fish interested, but it also helps bigger fish follow your fly. “It allows the fish to turn really easily; a tight figure-eight takes a lot of energy for that pike to turn, so you’re just trying to make it really easy for them to follow it.”

Read Next: Target Big Pike in the Fall

Making it easy for the fish to bite is the reason Desmond sticks his rod so far deep in the water while doing his figure-eight. “Jam the rod way down in the water because you don’t want them to work hard coming all the way up to the surface,” he says. The extra effort on perfecting your figure-eight is worth it. “It’s over the top when they eat like that,” he says.

Before you can open up your figure-eight, you first need to get the fish all the way to the boat. Desmond keeps fish interested throughout his retrieve by adding a dying action to his fly, a technique perfected by Kelly Galloup’s jerk-strip retrieve. “You’re using the rod tip to do the ‘jerking’ for you,” says Desmond, “and then retrieving back to the slack line.” Without using the rod tip, Desmond says you don’t see enough action in the fly. “It puts so much more undulation and action in those flies,” he says. “It makes it look like a baitfish that’s wounded or dying, to trigger a predatory instinct to get the fish to come over and eat it.”