Mounts of all shapes and sizes are on display 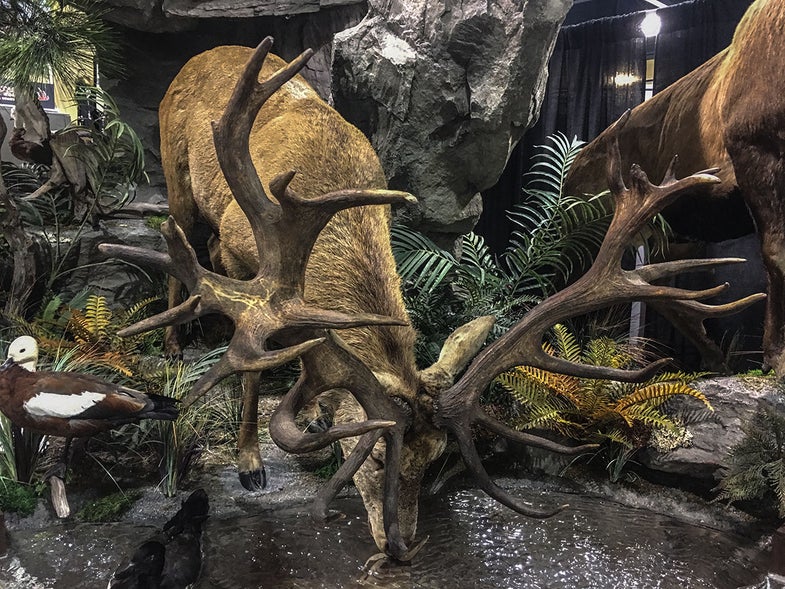 The detail in the diorama is impressive. Tony Caggiano
SHARE

It’s that time of year again—show season. As a guy who makes his living in the outdoor world, I spend a lot of the winter attending outdoor shows around the country. A highlight for me is gawking at the taxidermy displays.

I recently visited the Houston Safari Club Convention, made quick stop at the SHOT Show, headed on up to Reno for the Sheep Show and then back to Vegas for the always-impressive SCI Convention. Here are a few of the highlights from this year’s Taxidermy Show Tour.

I walked into the Houston Safari Club Convention and was met by this Big Boy. Elephant shoulder mounts are always impressive, but when it is seemingly floating on air over the savannah balanced only on it’s trunk, it’s simply awe-inspiring.

Two massive red stags, a world class chamois and an entire herd of tahr — a photo can’t possibly do it justice. Even the trout are huge.

Another massive piece, with a life-sized acacia, and a pair of large African leopards, battling it out while a zebra foal tries to go unnoticed.

Leopards with bad attitudes in trees are always a hit. This fight between the cat and the hyena, over a trophy bushbuck is damn cool, but the real treat is getting a look at the odd little critters to the side. It’s not often that you get to see an aardwolf and a bat-eared fox.

There is nothing an outfitter likes to show off more than some of the prehistoric horns and antlers they are pulling out of their camps. This brute of a red stag from Spey Creek Outfitters is no exception.

Another whopper, this time a giant elk on display at the HSC Convention.

Out at the Sheep Show I came across this beast. Kodiak Brown Bears are always impressive, but this guy is one of the tallest I’ve seen, standing more than 10 feet on the base. There was a line for photos with him all weekend long.

Well, word or not, you get the picture. There were sheep to be found in every corner of the Reno Convention Center (being at the Sheep Show probably helps with that), but to see this Altai Argali in person was quite an experience. Hard to imagine just how large they are until your up close and personal with one.

This bad boy was a real attention getter. Like a snap shot out of a Disney True Life Adventure, I was almost expecting to get wet as the salmon swam past.

A remarkable grouping of just about everything you’ve ever dreamed of hunting in the way of plains game—360 degrees of heads and horns.

Like stepping into Night at the Museum, I came around the corner and was greeted by Teddy on his trusty —Bactrian camel. As you can see, there is a remarkable variety of animal art out there on the show circuit, this and every year. Even if you will never get to the plains of Africa, the rocky shoreline of Dutch Harbor or the peaks of the Altai Mountains, you can get a glimpse of wildlife, frozen in time, at these and other sporting shows across the country each year.