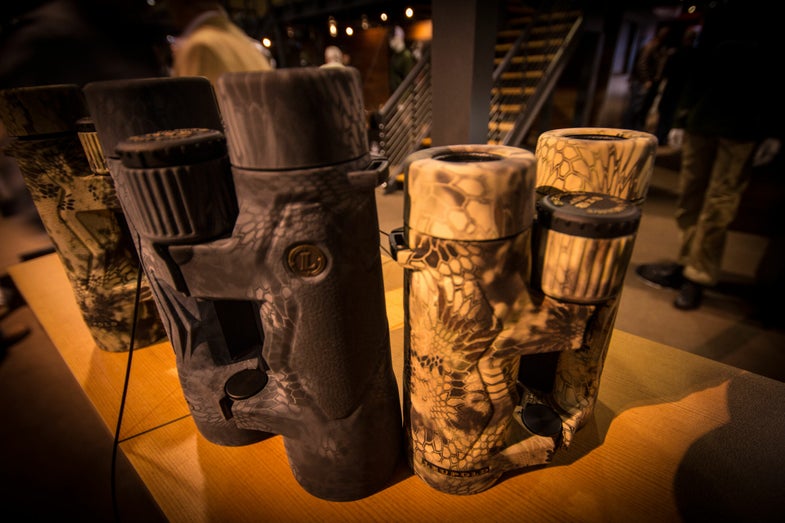 The Shooting, Hunting and Outdoor Trade Show is big. Big enough, in fact, that Las Vegas cab drivers will ask nearly every passenger who slides into the back seat of their sensible (and uniquely odorous) sedans the same question: “Are you here for the gun show?”

More often than not, that answer will be in the affirmative.

Guns and everything that go with them are at the forefront of this show. But here’s the deal: I’m a deer hunter. And I’m here with a singular purpose—to find the best new gear to help me kill more whitetails.

Here are seven items of intrigue from the 2017 SHOT Show. 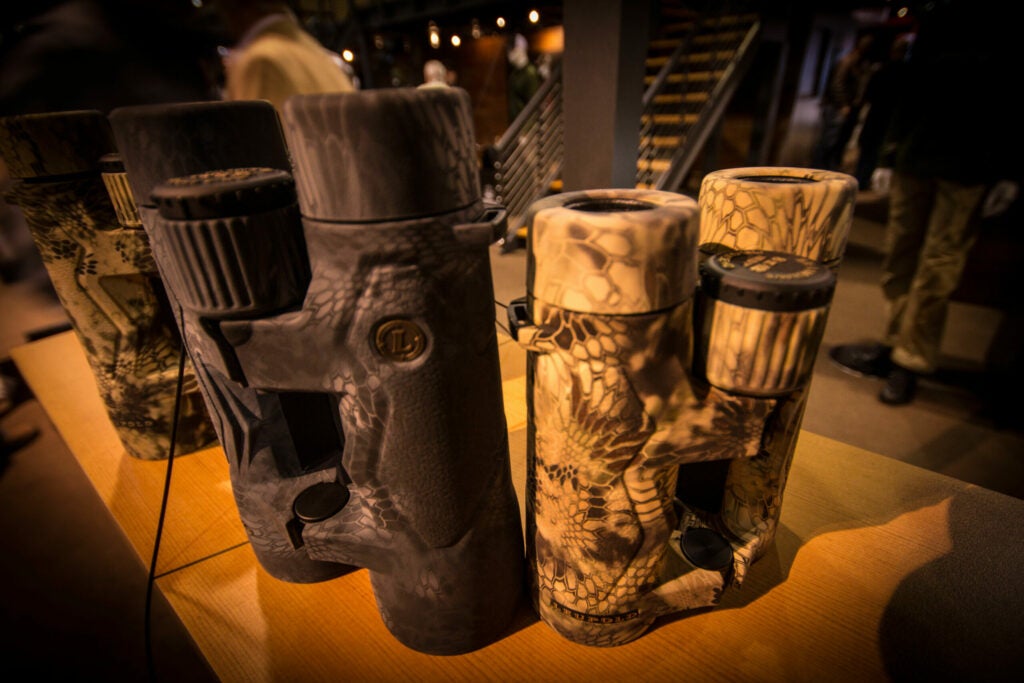 I admit to having a snobbish eye towards optics. I like only the best glass. Notice I did not say that I neither own nor use that glass. . . it’s simply too far out of my price range. Thus I scour SHOT each year to find a good binocular that offers solid clarity and a price tag I can stomach.

This new BX-3 Mojave Pro Guide HD was one of the first to do it in 2017. Testing optics while standing on a showroom floor is an imperfect science at best. But I liked the way these looked and felt. They likely won’t be confused for a high-end unit but they’re stout, clear and the Kryptek finish option was eye-catching.

Honesty is the best policy, right? So here’s a little dash of deer hunting truth: Sighting in a slug gun is not fun.

Today’s dedicated deer hunting shotguns are better than ever. Fully rifled barrels, improved triggers, and scopes designed specifically for slug guns have all made deer-focused shotguns more accurate. But those ultra-fast saboted slugs knock the hell out of you with every pull of the trigger. I do not look forward to my annual sight-in sessions with my shotguns.

So when I read the specs on Browning’s new BXS slugs, I was intrigued. The company claims the slugs will produced consistent accuracy out to 200 yards and will do it with much less recoil than other slugs. Why? Because they’re much slower than other comparable slugs.

I’ve struggled in the past to find a sabot that could print consistent groups and have long wondered if all that speed wasn’t to blame for the inconsistent results. With the BXS, that does indeed to play a factor.

At the SHOT Show’s test range, Outdoor Life Editor Andrew McKean had no trouble hitting the 200-yard plate with every shot. The slugs are a solid 1-ounce in weight and made of copper with a plastic tip.

Even better, the slugs cost less than many other options available. I call that a win-win. 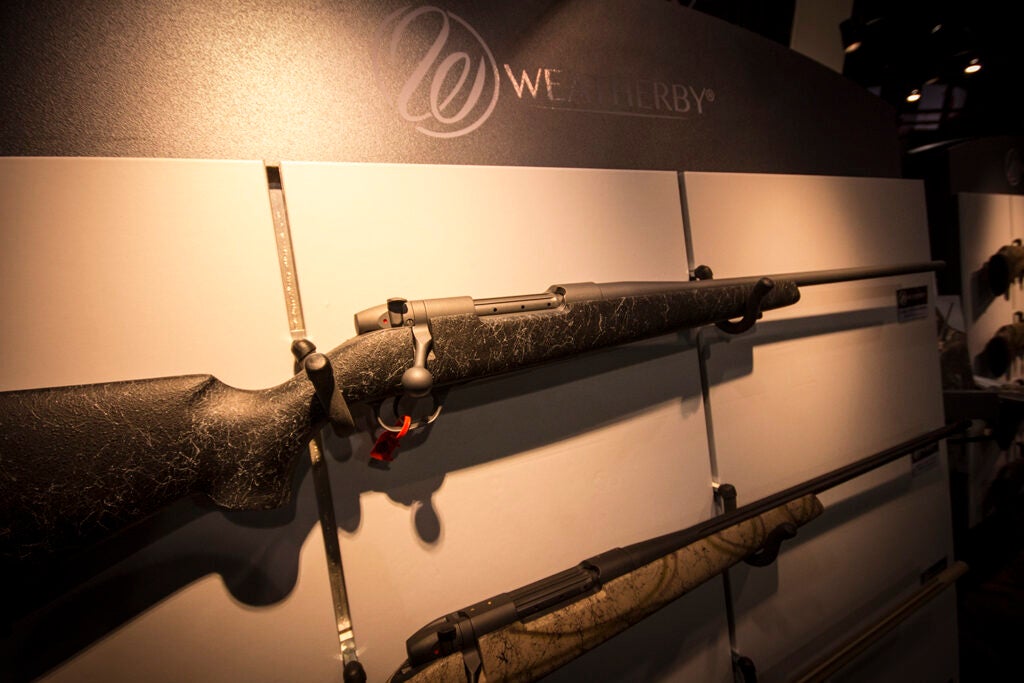 I don’t pretend to be an authority on firearms. I know this much about them: They need to be accurate. They must be reliable. And they need to not cost more than my truck. . . and I have an old F-150 that’s pushing 200,000 miles.

Weatherby’s Mark V rifles have long been one of those guns that meets the above criteria and the new iteration looks to continue that tradition. I was drawn to the Weathermark version—not just because at $1,700 it was one of the lowest-priced of the line, but also because it’s a gun that fits the way I hunt. I’m not one to worry much about appearances (the fact that I’m required to wear a sport coat during the SHOT Show was nearly enough to make me withdraw from participation in protest and spend far more time hunting and scouting than cleaning, maintaining and primping.

The rilfe’s Cerakote finish means I don’t have to worry nearly as much about rust and other such maladies that occur from infrequent cleaning. the composite stock may never be described as pretty (and, to be fair, neither will I) but the spiderweb finish does look good enough that my son may deem it cool.

The rifle is available in 15 different calibers including just about every popular deer load you can imagine.

The full lineup of new Mark V rifles feature the new LXX trigger which is factory-set to break at 3.5 pounds (adjustable down to 2.5) and include a sub-MOA guarantee, for those folks who can shoot far better than I. 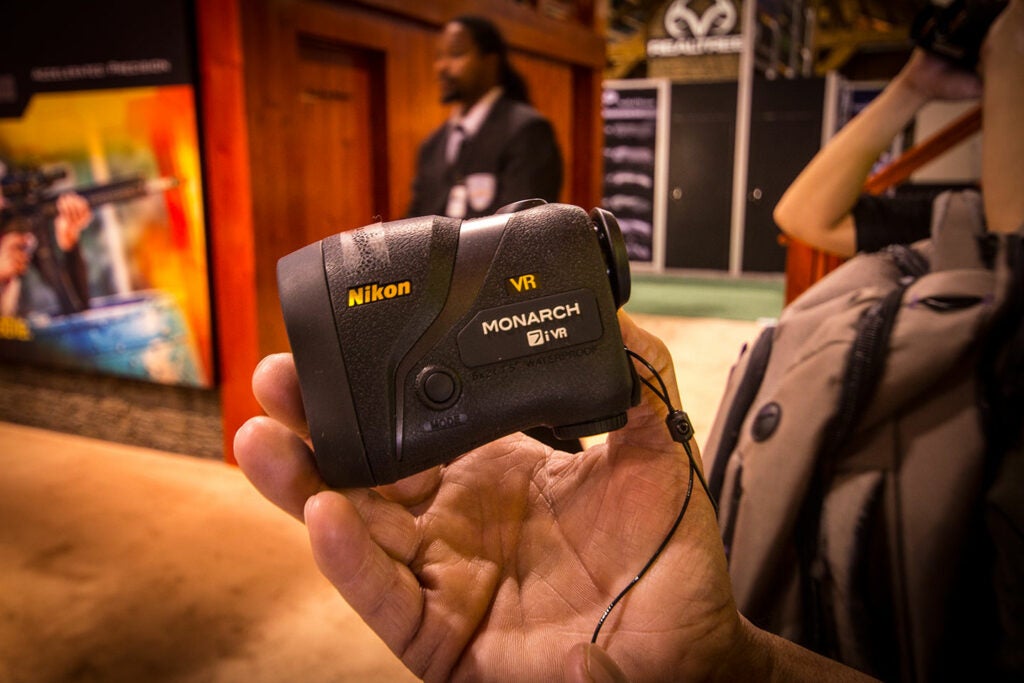 Remember that scene where Buddy the Elf, after navigating the seven levels of the Candy Cane forest and the sea of swirly twirly gum drops, rolls into that New York diner and declares: “You did it! Congratulations! The world’s greatest cup of coffee. . .?”

I had to try very hard not to do that when entering Nikon’s booth to take my first look at the world’s first vibration reduction rangefinder.

The Monarch 7i VR and the Arrow ID 700 VR are a pair of laser rangefinders that, for the first time ever, offer built-in vibration reduction technology. For guys like me with shaky hands, this is a long-awaited advancement.

Rangefinders don’t offer a tremendous amount of magnification but there is enough that holding steady on a narrow target at few hundred yards can sometimes be a chore. These units reduce those vibrations and align the image with the laser beam for hassle-free ranging.

I was equally impressed with the price—the MSRP for each is $399.95 and street prices should be well below $300. 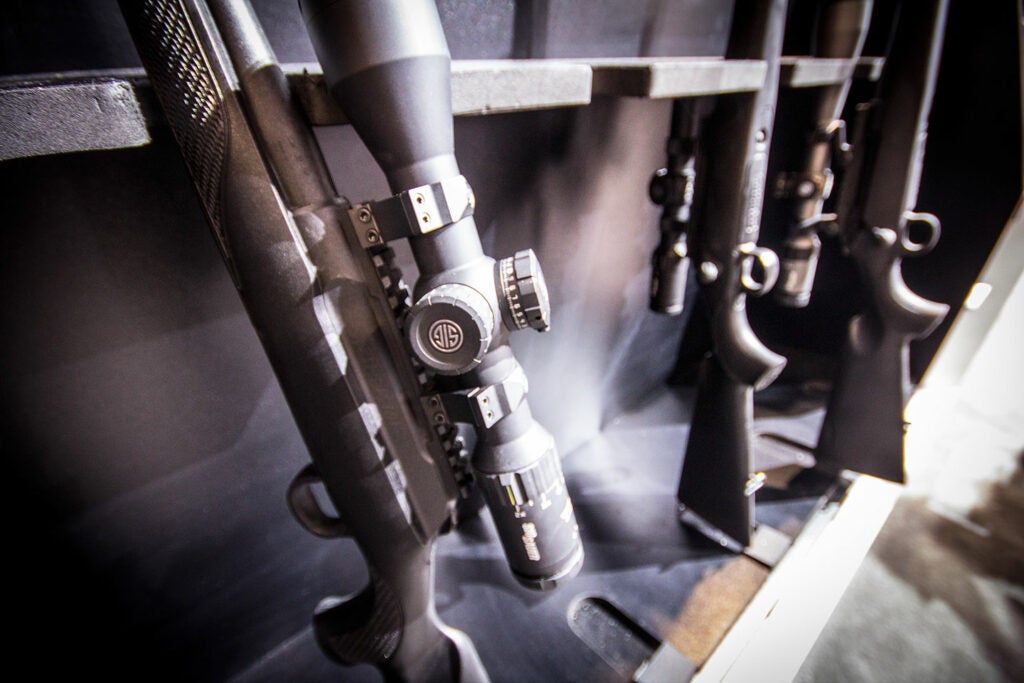 This fall, I spent a fair amount of time behind the glass of SIG’s optics line including the excellent Zulu7 binocular. But I’ve not yet had the opportunity to use one of their riflescopes. When I do, it’ll be this one in 2-10×42.

I live in southern Michigan, a shotgun-only zone. Affixing a scope to any shotgun is asking that optic to do something difficult. It not only has to endure the brutal recoil that comes from a high-velocity sabot slug, it must also be adept at a variety of ranges. In farm country, you’re nearly as likely to have a shot at 30 yards in heavy cover as you are to have a crossing shot on a whitetail 200 yards out in a cut bean field.

The 2-10 power range is ideal for such situations and while SIG isn’t marketing the Whiskey5 as a shotgun-specific model, if the rest of their optics line is any indication, this unit should be up to the abuse.

The scope line features SIG’s Levelplex anti-can system which produces a digital display to correct cant when aiming (though the 2-10×42 model is not equipped with it). It has the HellFire illuminated reticle and sells for about $800. 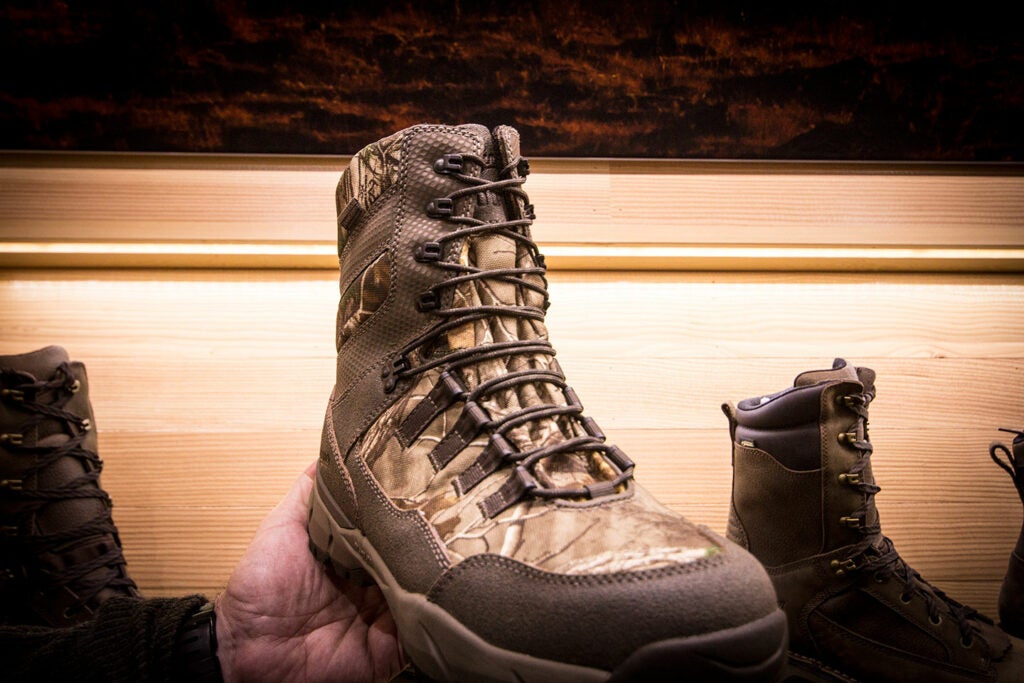 I often poke fun at my wife’s shoe collection. It’s a fun, if not cliche’, thing to do. But her affection for footwear could be worse. She could have mine . . .

I’m a fan of hunting boots and like to have a specific boot for varying applications. For mid-temperature whitetail hunts in October and early November, Danner’s new Vital looks to be a pretty solid option.

The boot features an athletic fit, synthetic materials for reduced weight and leather trim where needed for durability. The boots utilize Danner’s Danner Dry waterproof membrane which is not only effective but a bit more cost-effective than other waterproofing systems.

This is an interesting boot for mobile hunts in moderate conditions and while not exactly cheap is a solid buy at about $150. 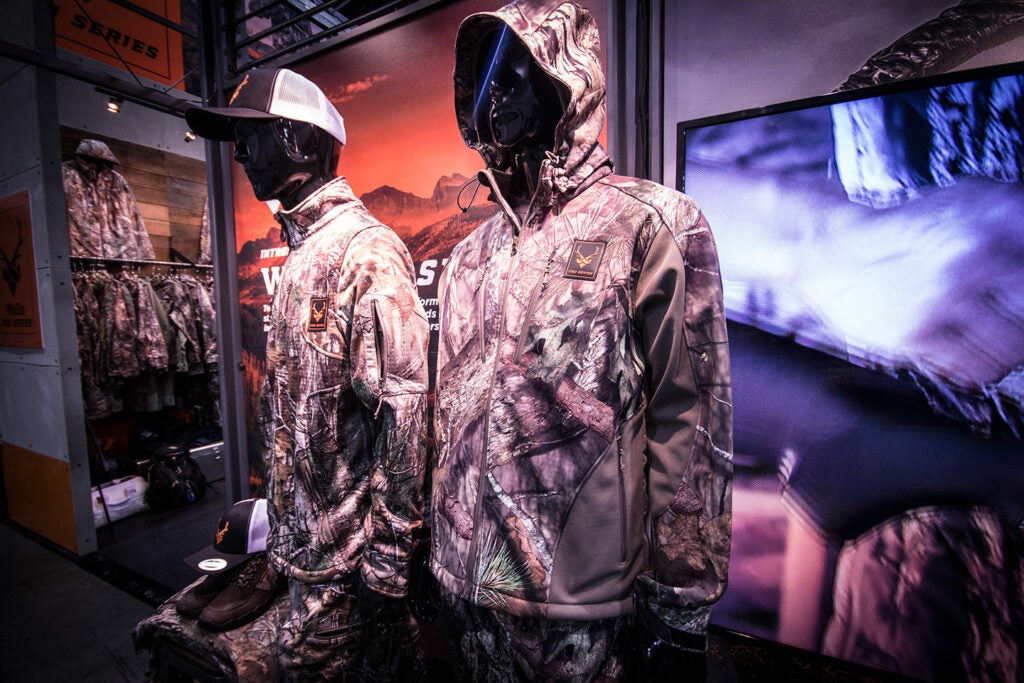 If you do much work outdoors, odds are pretty good that you’ve either owned some Walls workwear or know someone who does.

Walls got into the hunting game a few years ago and their lineup of camo jackets and coveralls has proven to be a good value if not overly exciting. Now the company is upping their game with the release of the Pro Series line.

The jacket and pants are of the popular softshell variety and looked to be high quality and built with attention to detail. The material was lightweight yet warm enough for moderate fall weather. There’s plenty of pockets and an improved level of fit and finish. The key feature here is the price. Final pricing wasn’t readily available but they should sell for 25 to 50 percent of the cost of the big name brands.