22 Nosler: New Round Has Potential For Varmints, Competition, and Even Big Game

A .22-caliber cartridge that runs through an AR-15-sized receiver

Those who chase predators and varmints, and those who shoot competitively, share a common trait: They are always looking for an edge. Gaining an advantage can shave seconds off a stage in a match or turn a miss on an animal into a decisive hit.

It is these folks, in particular, for whom the 22 Nosler was designed.

This new cartridge is a necked-down 6.8 Rem. SPC with a slight twist. Nosler gave the cartridge a rebated rim, which the 6.8 doesn’t have, so that the 22 Nosler can use a standard .223 Rem.–sized bolt face.

The result is a .22-caliber cartridge that runs through an AR-15-sized receiver and delivers ballistics that leave the .223 in the dust. Because of its larger case size compared to a .223, the 22 Nosler, which is noticeably chunkier, uses 6.8-SPC-sized magazines and won’t run through regular .223 mags.

My first task was a trip to the range to zero the rifle and chronograph the single load I had available—­Nosler’s 77-grain Custom Competition Match. Through the Colt Competition’s 18-inch barrel, the rounds averaged 2,871 fps as measured by my Magnetospeed chronograph. Using the same bullet in a .223 Rem. with the same 18-inch barrel length, I got 2,475 fps—396 fps slower.

An extra 400 fps is a meaningful difference, as you can see in the ballistics table (opposite) based on my range data. At 400 yards, the 22 Nosler shoots more than 12 inches flatter than the .223 Rem., and is, in fact, on par with the 6.5 Creedmoor in terms of trajectory at this distance.

At the 600-yard mark, the 22 Nosler shoots 42 inches flatter than the .223, and is only 10 inches behind the 6.5 Creedmoor. So for a hunter taking a long shot on a coyote, the 22 Nosler will be more forgiving and provide a larger cushion for error in range estimation and holdover calculation than a .223.

That boost in velocity and, by extension, terminal ballistics also increases its appeal for deer-sized game where hunting with .22-caliber centerfire is allowed.

To convert a .223 AR to 22 Nosler, this Odin Works upper is the answer. Comes with an adjustable gas block, a skeletonized free-float handguard, a bolt carrier group, and an oversize charging handle.
$899; odinworks.com

Sub-MOA Accuracy
A flat trajectory and zippy muzzle velocity don’t count for much if the round itself isn’t accurate. Fortunately, I didn’t find this to be a concern with the 22 Nosler. My first range session showed the promise of the round as my 5-shot groups were all under an inch, even though I wasn’t really shooting for top accuracy at that point.

About a week after that session, I took the Colt Competition rifle along as one of the submissions in Outdoor Life’s annual gun test and really put it through its paces.

In a field full of heavy-­barreled tactical rifles, it turned out to be the second-most accurate rifle of the evaluation. The average group size was .849 inch, but my fellow judges and I were able to turn in several .6-inch groups with it as well.

Another virtue of the round is how easy it was to shoot. The muzzle brake on the Colt Competition, combined with the inherently shooter-friendly ergonomics of the AR-15, kept our impacts on target even during rapid-fire drills. 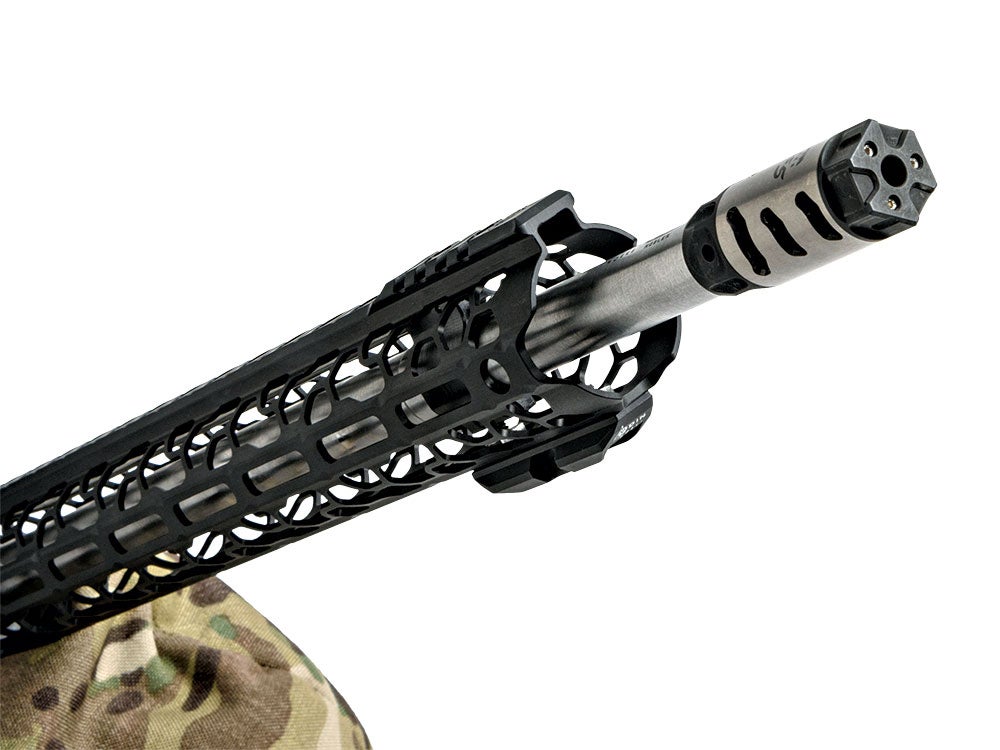 Brake Time The Atlas 5 In an AR with a muzzle brake, the 22 Nosler is a cartridge that is easy to control. The Odin Works Atlas 5 brake, which is tuneable, does a great job of keeping the sights on target from shot to shot.

More Options
While the 77-grain load was the only one I had available during the evaluation, it isn’t the only bullet Nosler is planning to make. By the time you read this, you might be able to try out either a 55-grain Ballistic Tip or 62-grain HPBT in factory-loaded ammo from the company.

Reloading dies are also available for those who like to handload.

You don’t need to go out and buy a new rifle to shoot the 22 Nosler. Odin Works and AR Stoner are already making uppers for the 22 Nosler, and I’d be surprised if other manufacturers don’t sign on as well in support of the cartridge.