I took a brand new Savage MSR15 chambered in Federal’s recently announced .224 Valkyrie down to Texas for a mule... 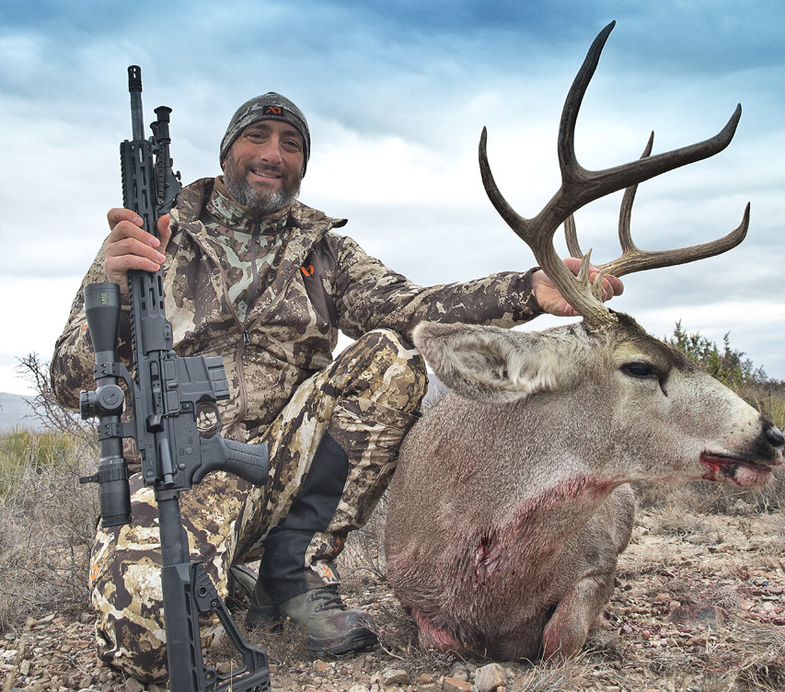 The author and his Texas buck taken with the .224 Valkyrie. John Laptad
SHARE

I took a brand new Savage MSR15 chambered in Federal’s recently announced .224 Valkyrie down to Texas for a mule deer hunt to get a feel for the round and see how it would work on game.

The .224 Valkyrie is essentially the 6.8 SPC necked down for .224 bullets, meaning it will feed through AR-15 sized rifles, but generates a lot more velocity than a standard .223. This, in itself, is a pretty good development and is similar to what Nosler did with last year’s 22 Nosler offering.

This isn’t just a me-too, product, however. Federal, which will officially unveil the .224 Valkyrie at the 2018 SHOT Show, has imbued the round with a couple of very appealing features.

One is its ability to run very heavy-for-caliber .224 bullets at impressive velocities. When most of us think about heavy .223 bullets, projectiles in the 70- to 77-grain range are what spring to mind.

Federal, however, created a new 90-grain .224-caliber Fusion bullet specifically designed for hunting deer and similarly sized game. Out of my rifle’s barrel, which has a 1-in-7.25 inch twist to stabilize these long bullets, the 90-grain Fusion exits the muzzle at 2,570 fps. With a 200-yard zero, the bullet shoots flat and will be effective to 300 yards or more on deer.

The rounds I loaded into the rifle’s magazine were the first to be used on any game animal, as the first production samples had just been made a few days before. Accuracy out of the rifle was good, and I had no issues taking the rifle to 600 yards on steel targets set among the yucca, creosote bushes and Spanish dagger on the West Texas ranch I had come to hunt.

The recoil on the round is very mild, and, given its flat trajectory, makes for a good time while pulling the trigger.

The shot on my deer didn’t test the round’s long-range abilities. I got to within 100 yards of my buck as it meandered with a group does through the scrub and a single round to its neck took him down quickly.

The round will also be hell on wheels for coyotes, prairie dogs and other predators and vermin.

In addition to hunters, the .224 Valkyrie is also designed for competitive shooters and long-range plinkers who want to stretch out their shots. One of the requirements Federal set for the round was that it remain supersonic past 1,000 yards, so shooting accurately at those distances is not unrealistic.

Of course, Federal wants everyone to shoot a lot of this ammo, and to help make that possible, they’ve made this round very economical, which is the Valkyrie’s other appealing quality I alluded to earlier.

Since Federal has been making 6.8 SPC brass by the ton for their customers in the U.S. military for many years, they know how to produce it cheaply. That is reflected in the prices for this ammo, which is being offered in four different loads initially.

The 75-grain TMJ in the American Eagle line is the least expensive, with an MSRP of $13.95 for a box of 20. Real world, you can expect to see it discounted to $9.99 on some dealer’s shelves.

As of this writing, at least 18 different gun companies are jumping on the Valkyrie bandwagon, giving this round a good start out of the gate.

Based on my initial impressions, I think this round brings enough “new” to the table to give it a good chance for success. That, however, ultimately depends on whether enough hunters and shooters will find the Valkyrie appealing enough to open their wallets.