The Benefits of First-Focal Plane Scopes 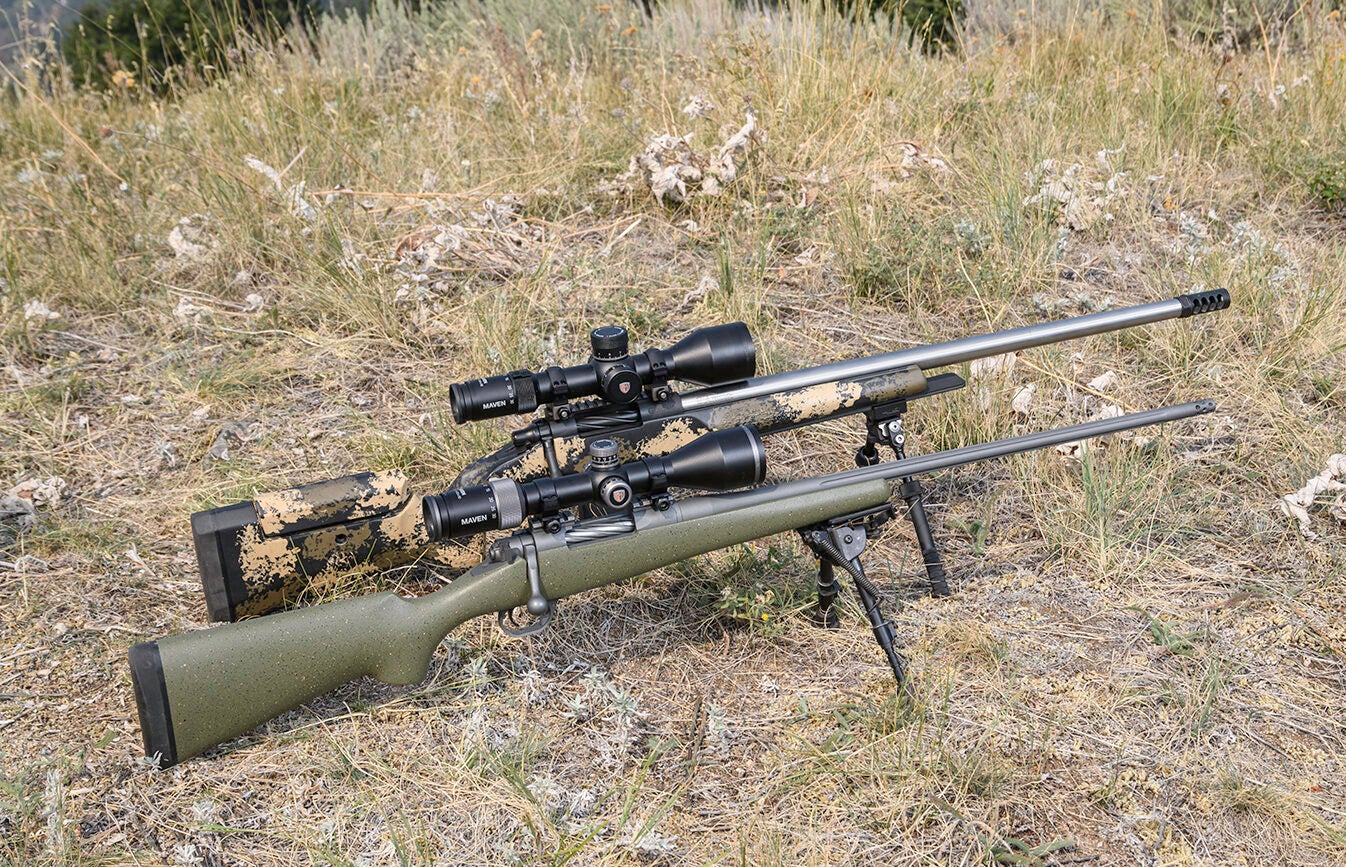 This pair of first-focal plane scopes from Maven typify precision optics for hunters and long-range shooters. The MOA-based RS.3 (front) balances well on a hunting rifle, while the beefier RS.4 with its mil reticle is geared toward long-range steel shooters. Bill Buckley
SHARE

First-focal plane precision riflescopes mystify and intimidate a lot of shooters. It’s understandable, especially for outdoorsmen and women who cut their teeth on scopes with a duplex reticle and a 3-9 magnification range. One key to mastering these instruments is getting comfortable with first-focal plane reticles, and understanding the benefits of that system.

A reticle in the first-focal plane (FFP) does not change size relative to what’s being viewed through the scope. Because of this, the reference marks for windage and elevation in the reticle will work no matter which power setting the scope is dialed to.

By contrast, second-focal plane (SFP) reticles are static. As you zoom in and out with an SFP scope, the reticle doesn’t expand or contract in relation to the target. So any holdover and windage marks in the reticle will only work at a specific magnification setting (usually the highest), which greatly limits the utility of the scope.

Which Power Setting Is Best?

The magnification ranges on precision riflescopes cover a lot of territory. They tend to bottom out around 4X. At the upper end, you’ll find magnification levels of 35X or more. A 5-30X scope is about ideal for long-range work.

Even when I’m shooting out to a mile (1,760 yards), rarely do I crank the magnification all the way up. Keeping the scope on a more moderate setting (say 15X to 20X) strikes a good balance. That offers a generous field of view, larger exit pupil and somewhat more forgiving eye box—all of which get better at lower magnifications. At the same time, the reticle will be easy enough to interpret so that you can make quick corrections to your holds when shooting.

What that middle-of-the-road power setting means in practice is that you will be able to do a better job of spotting your impacts or misses. This is because when the reticle moves under recoil, it’s less likely to jump all the way off target (especially if your shooting form is correct). The larger exit pupil and more generous eye box is more forgiving when you’re trying to get on target from an awkward position.

When to Max It Out

One problem that can arise when shooting from an awkward position is that that your eye might not be centered in the scope. If you haven’t adjusted the parallax focus and your eye is off-kilter, that can shift the reticle on the target and cause a miss.

The best way to adjust focus the parallax is to dial the scope to the highest level of magnification and then focus the scope until the target is sharp. The dial the power level back down before taking the shot.

By adjusting the parallax—also sometimes referred to as taking the parallax out of the scope—the shooter is focusing the reticle and target at the same distance. With the parallax adjusted, you should be able to wiggle your head around and the crosshairs should remain in the same spot on the target.

The Downside of FFP Scopes

One criticism of FFP scopes is that the reticle can be difficult to see and use at the lowest power settings. This can certainly be the case with some reticles. There are a couple ways that scope makers have worked to overcome this. One is by thickening the crosshairs outside the central area. That bulkier line is easy to pick up at lower power settings which is particularly helpful in low light.

Another option is to illuminate the reticle. That adds some bulk and expense to an optic but can be a shot-saver in certain circumstances. The best illumination systems have an “off” setting in between each level of illumination. This lets the shooter kill the illumination quickly no matter which illumination setting has been chosen.

FFP reticles are marked in either milliradians (mils) or in minute-of-angle (MOA). Which system to use depends on shooter preference. We’ll discuss the ins-and-outs of mil and MOA reticles in the next article.

• Getting the Most Out of a Precision Riflescope