5 Things I Learned About the 6.5 Creedmoor For Whitetails 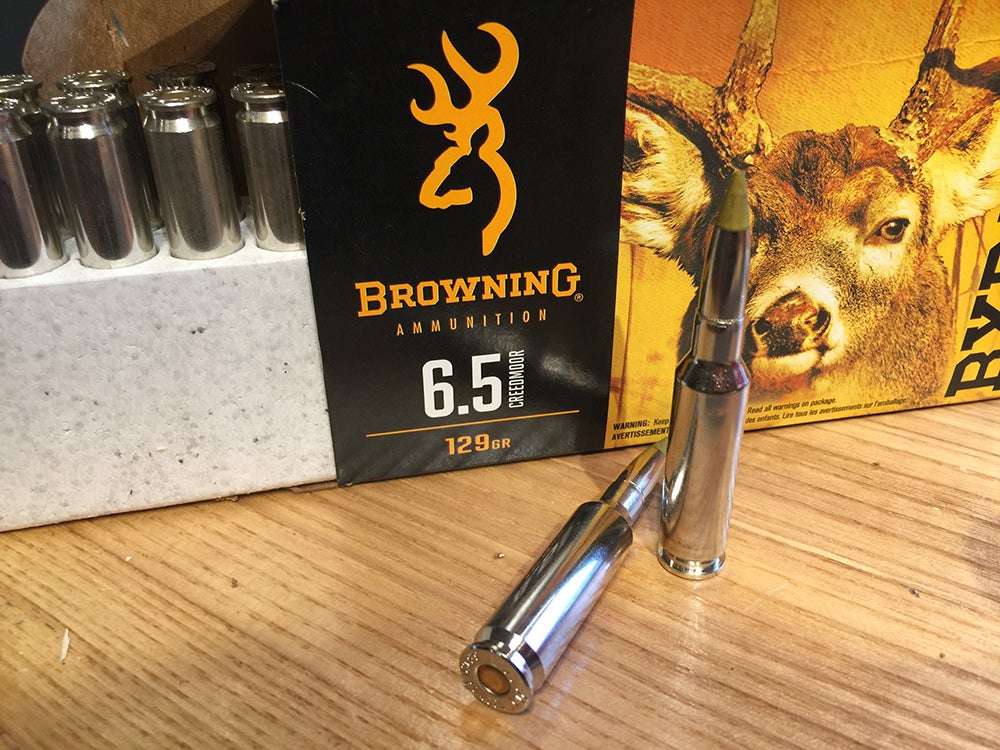 If you’re a regular reader of Outdoor Life, you’ve read plenty about the 6.5 Creedmoor. As an OL editor, I’ve read plenty as well. This week, I had the opportunity to put the 6.5 to use during a Kentucky whitetail hunt hosted by Browning firearms and ammo. It was my first time hunting with a rifle in a long time (I live in the shotgun-only zone of southern Michigan) and readily admit that I’m not exactly a rifle guru.

I will just as readily admit that I was a bit skeptical about the 6.5 Creedmoor as a dedicated whitetail round, a bias that was only reinforced when inspecting the new Browning BXR rounds I would be using on the hunt. At 129 grains, the bullets are significantly lighter than those used in the 30-06 that I used to take my first buck, and the long, slender build of the bullet seemed, well, a bit petite for big bucks.

There was no question the rifle could shoot (I was using the McMillan version of Browning’s X-Bolt). But could it really do the job on a big, mature whitetail?Well, here are five things I learned about the 6.5 Creedmoor as a deer caliber.

I do not, in any terms, consider myself to be anything other than a very average shot with a rifle. I am primarily a bowhunter and spend very little time shooting anything that doesn’t require the releasing of a string to make it shoot. It took me less than 15 minutes to shoot the best 200-yard group I’ve ever shot—three holes that could have been covered with a 50-cent piece.

At 300 yards, I did nearly as well. Recoil was laughably light and the rifle was an absolute joy to shoot. I easily could have blown through a couple of boxes of ammo and loved every minute.

2. Yes, It Will Drop a Deer in its Tracks

Prior to hunting, I asked Brad Fitzpatrick, an Outdoor Life contributor with a ton of rifle experience, whether a high shoulder shot with the 6.5 was advisable. Many deer hunters will aim there when using a rifle as that shot placement almost always anchors a deer where it stands. Fitzpatrick’s response: “I’m not sure.”

Well, one day later he answered that question for himself when he dropped a dandy 10-point in its tracks with a shot to the shoulder. The buck was only about 40 yards when shot so it’s not exactly a true test of the long-range power of the 6.5, but a dead buck that takes not another step after being shot is a pretty good piece of proof.

The very next afternoon, Browning Ammo’s Erin Cox, filled her buck tag. And she, too, dropped the deer where it stood with a single shot to the shoulder. She was using Browning’s BXR rounds that offer rapid expansion — further proof that even when using a bullet designed to expand very quickly, the 6.5 Creedmoor is delivering outstanding terminal ballistics on impact..

4. It Will Penetrate Deeply

On both Erin and Brad’s bucks, the bullet (both were using the BXR rounds) was recovered. Brad’s was lodged just under the skin of the deer’s opposite shoulder. Expansion was excellent and internal organ damage was extensive. Yet, at distances of less than 50 yards, I was somewhat concerned that the bullet hadn’t passed through. And then I killed a Kentucky whitetail of my own.

On the third afternoon, I took an 8-point at a distance of about 45 yards. Shot placement was ideal on the entry side, tucked right in the “pocket” behind the buck’s front shoulder. The deer was quartering away and the bullet exited at the point of the deer’s opposite shoulder, shattering the scapula as it passed through.

5. Blood Trails can be Substantial

The bullet took out both lungs and grazed the top of the buck’s heart. The blood trail was one of the most liberal I’ve ever seen. The photos and video truly tell the story but suffice it to say, after following that short blood trail I had no further concerns over the 6.5’s ability to deliver substantial damage to vital organs and to deliver easily-followed blood trails as a result.

The 6.5 Creedmoor is Fun to Shoot

I had as much fun during my Kentucky hunt as I’ve had hunting whitetails in quite some time. Part of that was the overall hunting experience. We were hunting an area with plenty of deer, some big bucks and great company in camp. But part of it was the fact that I was toting a rifle I had tremendous confidence in. I knew any deer within 300 yards was in serious trouble. And, after seeing the real-world results from three kills, I think I’ll be toting the 6.5 around a whole lot more.

How to Select a Good Deer Cartridge

Whether you decide to go with the 6.5 Creedmoor or not, it helps to know what you’re looking for when selecting the perfect deer cartridge for your local hunting grounds.

With whitetail rifles, cartridges and bullets, context is everything. Picking the right equipment depends on where you’re hunting, how you’re hunting and which type of whitetail you’re going for. There’s a world of difference between hunting the barrel-chested whitetails in Canada’s deep timber and sitting in a raised blind overlooking a Sendaro in Texas while waiting for a buck with more antler than meat to jump out of the mesquite.

There are as many types of whitetail rifles and cartridges on the market as there are ways to hunt our most popular deer. Here are some guides to getting started.

Comfort is key. Go with a cartridge that you can shoot without the recoil or muzzle blast negatively impacting your marksmanship. Even the .223 Remington, with proper bullet selection, makes for a good whitetail round. In many states, the legal minimum is a 6mm/.243 bullet and that’s a fine place to start. Avoid the urge to “upgrade” to a magnum round, unless you’re hell bent on mastering it. I shoot most of my deer (and elk, for that matter) with the .280 Remington, though I’ve taken quite a shine in recent years to the killing ability of the 6.5 Creedmoor when using premium bullets. The .280, which has the .30-06 as its parent case, is a great all-around cartridge (the same goes for the .270 and the ’06) and won’t beat you up the way the WSMs and other heavy-hitters can. The 6.5 is even milder and easier to shoot and it kills deer just fine.

When I hunt timber, I love toting a lever gun and cartridge I use is the venerable .35 Remington. It is easy to shoot as well and those .35-caliber bullets do a great job on even the largest deer at ranges under 200 yards.

There’s nothing magical about the cartridges I’ve mentioned here. Take a look at a ballistics table and you can find plenty of cartridges that match up well with what I’ve suggested. Any will do the job.

We have an embarrassment of excellent bullets to choose from for big game. Premium bullets offer a level of consistency and terminal ballistics that are hard to beat. They often have an edge in accuracy over lower-priced projectiles, but not always. Some mid- and even lower-level bullets will perform just as well as the top-shelf bullets for a fraction of the price. How do you know which to go with?

As a rule of thumb, if you’re going to go with a light cartridge for deer–something along the lines of the .243 or even the 6.5mm calibers–it is smart to go with a monolithic premium bullet. I’m thinking here of bullets like the Hornady GMX, the Barnes Triple Shock, Federal’s Trophy Tip. They all penetrate deeply and reliably, which is vital for smaller-caliber cartridges. Another bullet that I have tremendous faith in is Nosler’s Accubond. It isn’t a monolithic design, but it is the equal of any bullet out there.

If you venture into the 7mm and .30-caliber realm (and up), you can broaden your criteria. Traditional spire pointed bullets with exposed lead tips will knock over any whitetail hit in the vitals.

The cheapest way to improve the accuracy of your rifle is to purchase several boxes of ammo in different bullet weights and styles. Over a couple of sessions at the range, shoot at least two five-shot groups with each. Take the top two loads and shoot another pair of groups with them to see which is shooting best. Buy a few boxes of the ammo that wins and use your ammo leftovers for fouling shots and practice.