.260 Remington vs. 6.5 Creedmoor: It’s All About Understanding Rifle Twist Rates

It might not win in a popularity contest, but the .260 Rem. is beginning to gain traction with hunters 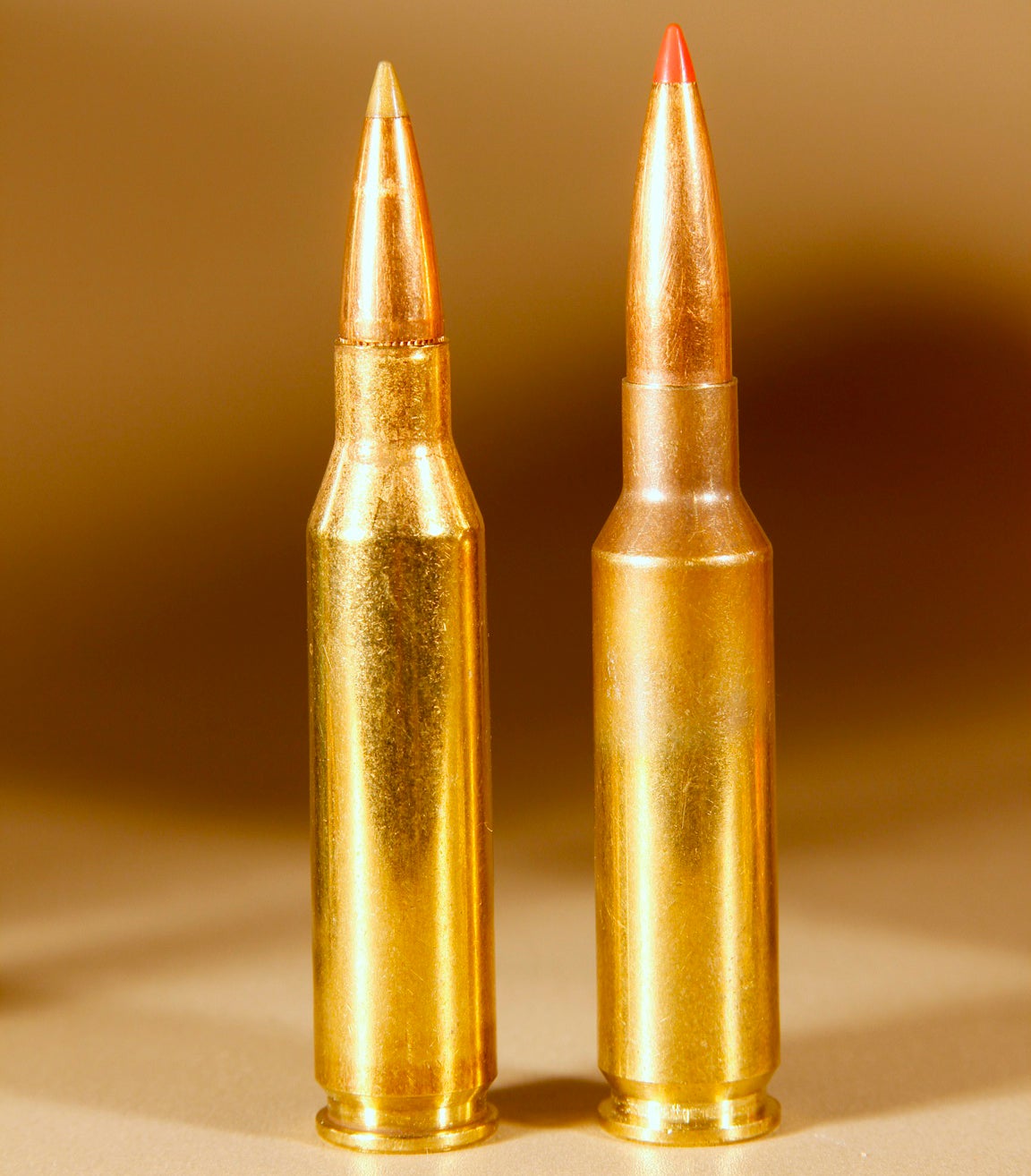 Why does the 6.5 Creedmoor outsell the .260 Remington when the latter throws the same bullets from the same short-action rifles, but about 100 fps (feet per second) faster?

To appreciate traditional rifling twist rates, we should perhaps revisit what rifling is and does.

Historically, all guns had smooth bores. They could be loaded with heaps of small pellets (birdshot or the larger buckshot) or a single ball (slug or bullet.) Beyond 50 yards or so, slugs hit harder and were deadlier than pellets because their mass retained energy better than did the smaller, individual shot pellets. But slugs weren’t accurate because surface imperfections—dings, grooves, flat spots and such—led to inconsistent planing in the wind. Even on a dead calm day, a slug stepping out at 1,000 fps faces a headwind of at least 1,000 fps. That’s 686 miles per hour! If that atmospheric pressure is even slightly more significant on one part of the ball than another, the flight path will be altered. This is why bird shot scatters ever farther as it progresses downrange. And it’s why single balls fired through smooth bores rarely go exactly where aimed.

Fixing this inaccuracy began in the late 1400s when German or Austrian gunmakers tumbled to the concept of cutting shallow grooves in bores, probably to offset carbon fouling. The grooves provided space in which the soot could lodge. Paper or linen patches around the ball would squeeze into the grooves to seal expanding gases. Soon enough someone familiar with curved arrow fletching added a turn to the rifling grooves and voila! Accuracy improved. This is because an object in motion tends to maintain that motion until acted upon by an outside force. Like a spinning top, a spun bullet resists air pressures pushing counter to this axial motion, helping the bullet stay nose forward on its original line of motion toward the target.

Hunters were fairly quick to recognize the accuracy benefits of this spin, but militaries were less eager to exchange their fast-loading smooth bores for the slower, tighter fit of bullets rammed into rifled barrels. While the British Red Coats were able to reload their Brown Bess muskets more quickly than our Minutemen and citizen defenders could reload their Pennsylvania rifles, the rustic hunters were picking off the enemy from twice the distance.

The advent of elongated bullets in the first half of the 19th century changed rifling significantly because the long bullets required more spin to stabilize. Englishman Alfred Greenhill developed a mathematical formula for determining twist rates for lead bullets in 1879 and it still works pretty well today, although variations like bullet material, hollow points, etc., alter things a bit. Regardless, the basic rule is that the longer the bullet, the faster the rifling twist rate must be to stabilize it. And this takes us closer to the explanation for why the .260 Remington is not as popular as more “modern” .264/6.5mm cartridges like the 6.5 Creedmoor.

During the development of 20th century cartridges, bullets were typically flat-based spire points with a few minimally tapered boat-tails in the mix. Most were lead alloy cores wrapped in gilding metal jackets. Weights were balanced to bores and the game expected to be hunted with such bore sizes. Smokeless powders came into wide use in the 1890s and added significant velocity to bullets, so much that hunters quickly figured out the big .45- and .50-caliber blackpowder cartridge rounds of the 1800s were no longer needed to take most North American game. The little .284 bullet on the 7×57 Mauser cartridge was knocking down everything, including Africa’s biggest antelopes, Cape buffalo, and even elephants. It proved so effective against U.S. soldiers in Cuba that our military developed the .30-06 Springfield to fight back.

The upshot was that during the 20th century, manufacturers established rifling twist rates by cartridge based on typical bullets then in vogue. A few military rounds like the .30-06, 7×57 Mauser, 6.5 Mannlicher-Schoenauer, 6.5×55 Swede, etc. were set up to stabilize long, heavy-for-caliber bullets, so they had fairly fast twist barrels in the 1:8 to 1:10 range — one complete turn of the grooves in eight or 10 inches of travel. (Note: it is not necessary to have 8 or 10 inches of barrel to match this. The rate of turn imparts the spin even if the barrel is shorter.) Many high velocity varmint cartridges were set up with 1:12 to 1:14 twist rates to balance 40- to 55-grain .224 bullets.

Interestingly, twist rates were never standardized. Each rifle maker was free to choose whatever twist he imagined would produce the most consistent accuracy across the range of bullet weights (lengths, really, for it is length, not weight, that makes the difference.) Most infamous among these twisting choices was Remington’s 1:12″ for its .244 Remington to compete against Winchester’s .243 with 1:10″ twist. The 1:12″ turn would not stabilize most 100-grain bullets, dooming the excellent .244 Rem. to obsolescence while the 1:10″ twist of the similar .243 Winchester pushed it to worldwide fame because hunters thought a 100-grain bullet was essential for terminating deer. Never mind that thousands of hunters regularly bring home the venison with .243 bullets as light as 70-grains.

A common concern with twist rates is an overly-hyped phenomenon called “over-stablization.” While it’s true that too much spin on a short, thinly jacketed bullet can spin it apart, that hardly makes it unstable — until it’s flying like pancake batter from an electric mixer. But hyper-spin of tough-enough, short, light bullets in any caliber can, theoretically, exacerbate yaw, precession, and nutation (movements of the tip off axis.) A bullet twisting on its axis too fast might also keep its nose high rather than tipping along the parabolic plane of its trajectory. This presents more surface (shank) to air pressure to increase drag, which decreases B.C. (ballistic coefficient) and compromises trajectory, both drop and deflection. I’m not sure I’d label that over-stabilized. By the way, many bullets spin at the rate of 300,000 rpms. Some reach 400,000.

Read Next: 8 of the Hottest New Hunting Cartridges for 2021 and Beyond

Determining the twist of any rifle barrel requires asking the manufacturer or testing for yourself by pushing a tight-fitting bore brush or patch through your barrel with a freely rotating cleaning rod. Mark the start and then the finish when the rod completes a 360-degree rotation. The distance between the start and stop lines in inches is the twist rate.

Now let’s get back to our .260 Remington/6.5 Creedmoor popularity contest. When Remington in 1997 legitimized the wildcat 6.5-308 (.308 Winchester necked down to hold a .264 bullet) competition shooters had been succeeding with it for many years, pushing the best 140-grain competition bullets of the day. Remington, however, saw this target round as a hunting cartridge. They chambered it accordingly with the rather low B.C. 140-grain Core-Lokt bullet in the short-barreled Model Seven rifle with 1:9 twist. That wasn’t exactly playing to its strengths.

Then came the early 21st century and a paradigm shift propelled by increased focus on military snipers and long-range shooting. Much of this was made accessible to the average shooter with the advent of affordable laser rangefinders. I believe Leica came to market with the first in 1999. The ability to pinpoint target distance suddenly made long range shooting more than a guessing game. Combined with precision ammo and proven drop and drift dope, lasers made long range hits predictable and repeatable.

The reach for ever greater long range precision included development of ever sleeker, longer, more aerodynamically efficient, high B.C. bullets. After a brief fling with uber-magnums like the .50 BMG and .338 Lapua Magnum, recreational long rangers started looking for similar reach with dissimilar recoil. Hornady gave it to them with its “ground up” 6.5 Creedmoor, the first 6.5 round specifically engineered to optimize long range shooting success with relatively long, high B.C. bullets. With this in mind, rifling twist was set at 1:8″. Rifles were sculpted to maximize long-range precision. Factory ammunition was tailored for the best long range precision, too.

Meanwhile, there sat the .260 Rem. in short-barreled hunting rifles and a few old, custom target rifles. Its 1:9 twist was at the ragged edge for stabilizing the newest, highest B.C. bullets. It wasn’t the kiss of death, but as bullet length crept up, the 6.5 Creedmoors kept pace and the .260 Rem. did not. Manufacturers could have kept the .260 Rem. in the game by using the same 1:8 twist barrels, but why bother when the Creedmoor was already seen as the long range shooters’ penicillin? It cured everything. Recoil, accuracy, wind deflection… Gun and ammo makers concentrated on producing the best, most efficient, most accurate 6.5 Creedmoor rifles and ammunition possible. The .260 Rem., meanwhile, was treated like Cinderella. Beautiful, but largely ignored. Left behind with traditional bullets suitable for hunting, but not ideal for the hottest trend: extreme range target shooting.

Now that 6.5 Creedmoor mania has chilled, ammo makers appear to be upgrading their .260 Rem. loads with more efficient bullets. Berger offers three loads with sleek bullets from 120- to 140-grains, the latter boasting a G1 B.C. of .607. A 1:8 twist or faster is recommended. Hornady has ammo with 129-grain SST bullets rated .485 B.C. and one 130-grain ELD Match bullet at .506 B.C. Nosler still doesn’t load its excellent 142-grain AccuBond Long Range atop the 260 Rem., but Double Tap Ammunition does, rating it 2,841 fps from a 24-inch barrel. Federal has a 142-grain Sierra MatchKing Boat-Tail Hollow Point, B.C. .611, rated 2,750 fps. There are many others with various 120-grain, 130-grain and 140-grain target and hunting bullets from Barnes, Black Hills, Remington, and Sig Sauer.

This tale of two 6.5s could lead to a happy ending for any hunter looking for a bargain rifle. Anything chambered .260 Rem. tends to gather dust on dealer shelves. You might pick one up for a relative song. If you’re not intending to hire it to win any PRC competitions, you could find yourself with a delightfully efficient and effective deer/pronghorn/sheep and even elk rifle capable of performing as well as or slightly better than the .270 Winchester to 300, 400, even 600 yards. Handload it with the best 140- to 143-grain target bullets and you could out shoot your buddies’ 6.5 Creedmoors.