Whether you’re after bull elk, deer, coyotes, or long-range targets, this list of 6.5 Creed cartridges has you covered 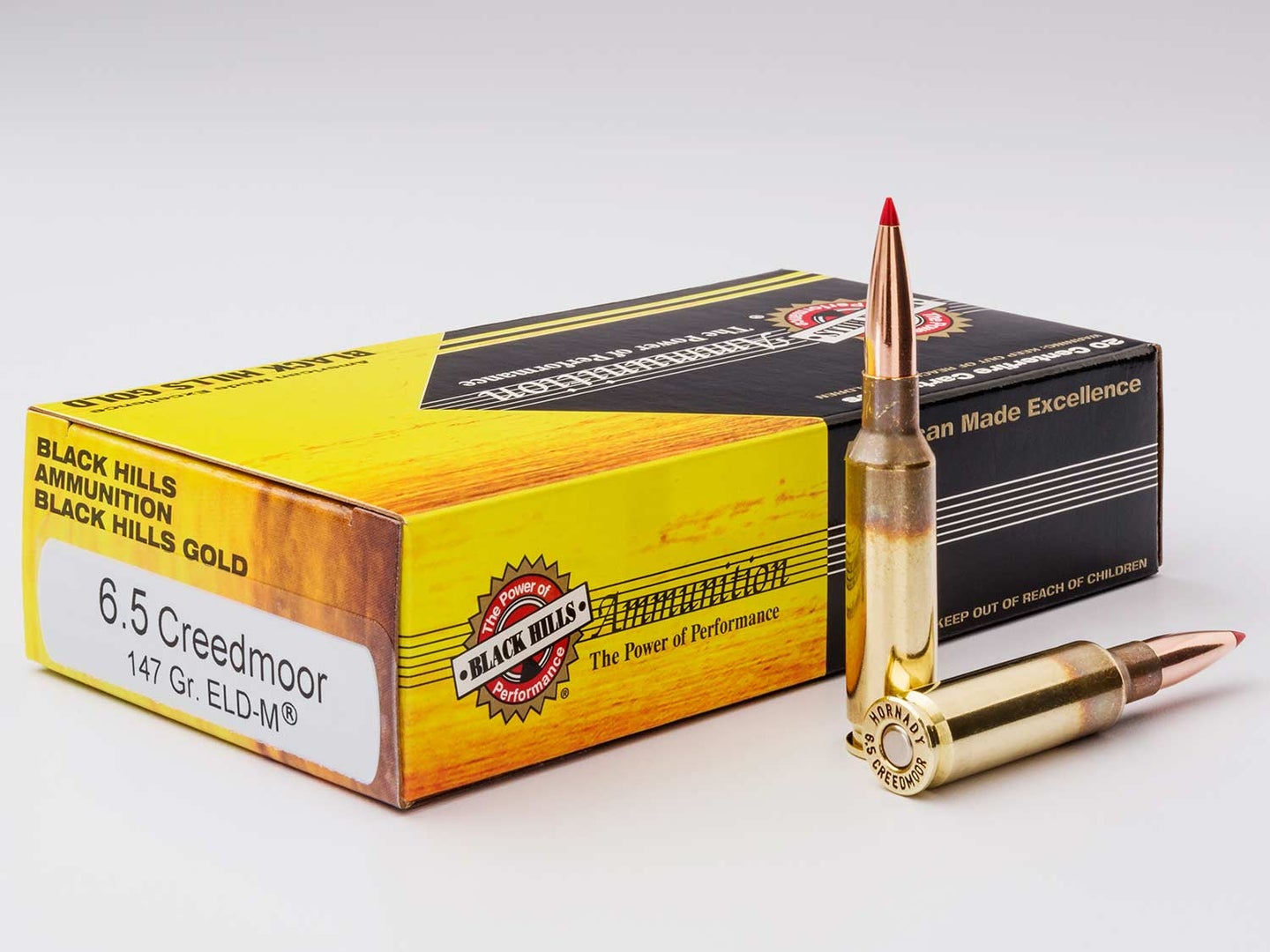 Based on accuracy, versatility, and popularity, the 6.5 Creedmoor round is the wonder-cartridge of the 21st century. It doesn’t possess the magic some folks think it does (two days ago a clerk behind a gun counter informed me that the 6.5 Creedmoor didn’t start to drop until 700 yards. Heaven help us). But the Creed is exceptionally accurate, its recoil is relatively low, and it’s remarkably lethal on everything from prairie dogs to bull elk. Due to its popularity, there are a plethora of ammunition offerings available today. Here are some of my favorites, ranging from streamlined, high-BC long-distance target rounds right down to sizzling-fast varmint medicine. Street prices for all the rounds listed are approximate (it all depends on where you shop).

Black Hills is one of my favorite ammo companies, partly because they build awesome ammo, and partly because they’re a family-owned, super patriotic business. Combine their handcrafted quality with Hornady’s insanely accurate 147-grain ELD-Match bullet with a G1 BC of 0.697 and you’ve got an ideal cartridge for long range. Muzzle velocity will be around 2,700. Street price: $41.00

Federal possesses a reputation for building quality ammo that is second to none. Add a superbly accurate 130-grain open tipped match Berger bullet with a G1 BC of .560 and you’ve got a nasty-good combination. Factory testing has this ammo shooting 2,875 FPS at the muzzle. Street price: $29.00.

Of all the bullets available in 6.5 Creedmoor, I think this one will provide some of the best terminal performance for big, heavy-boned animals. It would be among my top choices for bull elk and moose because it’s going to drive deep through bone, muscle, and vital organs. This ammo has a reputation for great accuracy, and as the additional bonus of being legal to use in lead-free zones. The G1 BC is 0.468, and muzzle velocity will be around 2,825 FPS. Street price: $36.00

I’ve seen more animals taken with this combination than with all other kinds of 6.5 Creedmoor ammunition combined. It’s superbly accurate, very aerodynamic, and makes stuff really dead really fast. I’ve seen many elk killed with this projectile, including some big bulls, and it’s never failed to perform. Sporting a G1 BC of 0.623 and exiting the muzzle at 2,700 FPS. Street price: $36.00.

If your Creedmoor’s main job is dropping whitetails, mule deer, or pronghorns on the spot, this ammo is up to the task. It’s also easy on the pocketbook. Accuracy, explosive expansion, and knockdown describe this ammo. G1 BC is 0.557, and muzzle velocity around 2,850 FPS. Street price: $29.00 per box of 20.

Nosler Accubond bullets have a stellar reputation for accuracy, integrity, and terminal performance. This 140-grain load fits the family, featuring a G1 BC of 0.509 and starting out with a muzzle velocity around 2,700 FPS. I recently returned from a plains game hunt in Africa where my son shot six animals with this load, including an oryx at 315 yards. Performance on every animal was ideal. If you’re looking for a load that’s perfect for deer hunting and versatile enough to use on everything up to and including elk, this is your baby. Street price: $45.00.

Economically priced and ideal for everything from itty-bitty varmints to big northern coyotes, Hornady’s V-Max perched atop premium components from Federal makes a potent combination. Blistering out the barrel at 3,300 FPS, the bullet sports a G1 BC of 0.365. Street price: $25.00.

Built for the high-volume shooter who also demands precision (think prairie dog hunting) Nosler’s Varmaggedon (I love that name) spells the end for varmints and predators. The 6.5 Creedmoor is a new iteration, and BC and velocity are yet to be determined. Street price per box of 20 will be around $35.00.

No ammo roundup is complete without inclusion of a plinking load or two. This ammo isn’t going to shoot as well as the more expensive loads listed above, but it’ll help you build confidence with your rifle at a price you can afford. Muzzle velocity is 2,850, and street price for a box of 20 comes in around $14.00.

This is the second cheapest ammo I found when searching Google. This ammo is inexpensive enough to plink with yet still a good option for deer hunting. Use it on everything from pop cans to whitetails. G1 BC is 0.445 and muzzle velocity will be right around 2,820 FPS. Street price as low as $18.00 per box of 20.