The ultra-popular 6.5 Creedmoor is a fine short-action cartridge, but is it better than the short-action .260 Remington? Or the venerable 6.5x55 Swede? 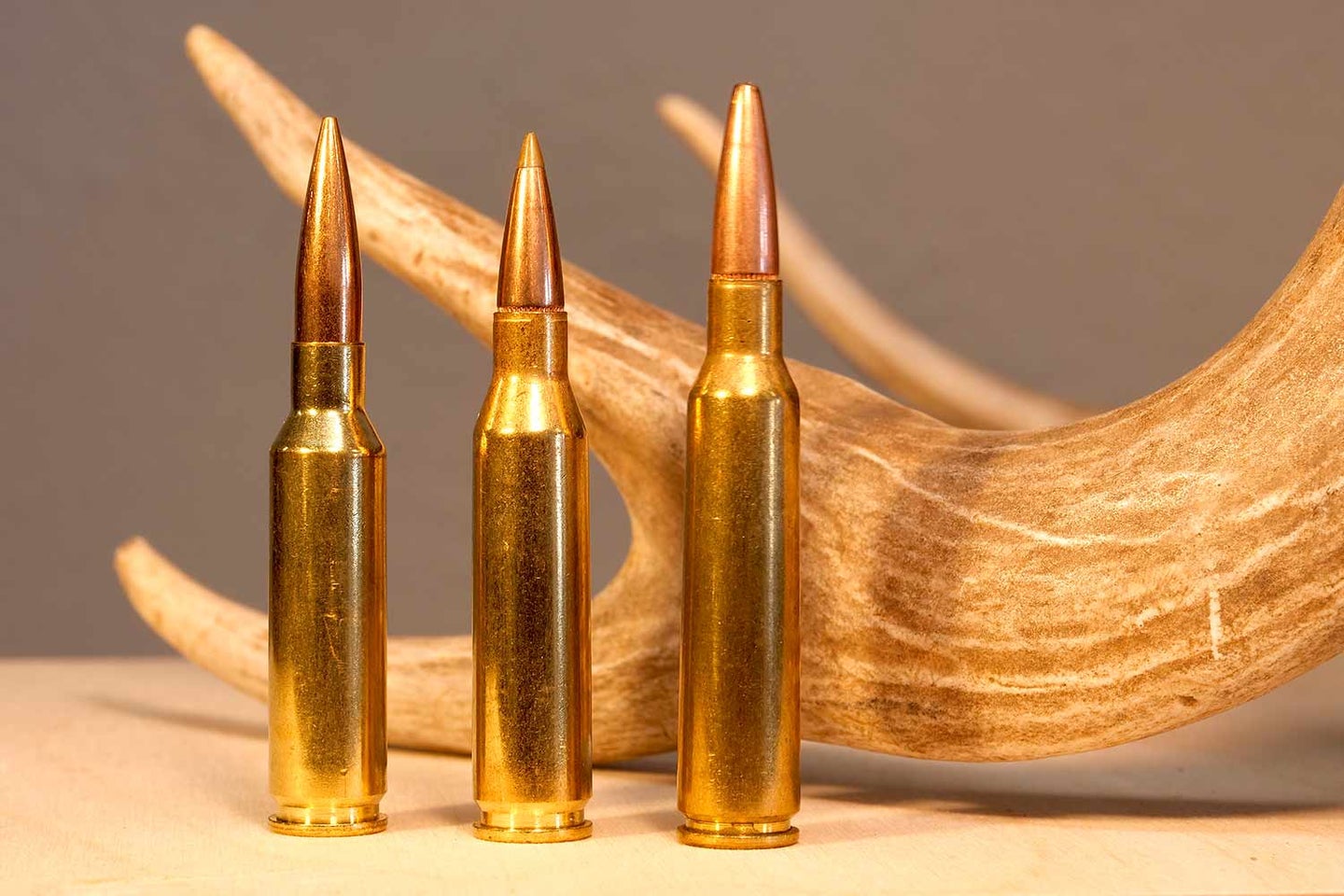 The 6.5 Creedmoor is currently one of the top selling centerfire cartridges in the US. The .260 Remington and 6.5×55 Swede are… Well, many hunters and shooters don’t know what they are. Or have even heard of them. Yet both shoot .264-inch diameter bullets, the same as the Creedmoor. And both have larger case capacity than the Creedmoor, so they can be loaded to shoot faster and hit harder. But…

The Creedmoor is still more popular. What gives?

Let’s start this investigation where it matters most. The bullet. Newly minted fans of the 6.5mm are enraptured by those 26-caliber bullets, believing them inherently superior to any narrower or wider. But this is a misapprehension. There is nothing magical about the .264s. They do not necessarily fly flatter, drop less, deflect less in crosswinds, or hit harder than .277 bullets, .284 bullets or even .257 bullets of similar materials, construction, and B.C. It’s just that more of them are designed and built to maximize aerodynamic shape and high B.C. And most 26-caliber barrels are rifled with twist rates quick enough to stabilize them.

Ballistic coefficient (B.C.) is simply a numerical rating, a measure of a bullet’s ability to resist drag. The narrower, heavier, and more sleekly shaped the projectile, the higher its B.C. number and the more efficiently it will zip through the atmosphere. Obviously, if a bullet doesn’t waste energy pushing air out of its way, it maintains more velocity. That means it flies farther, deflects less in crosswinds, arrives sooner, and carries more energy when it gets there. B.C. is a B.D. (Big Deal.)

Virtually any caliber can be built to maximize B.C., but it is easier to do with larger calibers because they are heavier, hiding more of their mass near their cores. A typical boat tail, spire point .224 varmint bullet like the 55-grain Nosler Ballistic Tip has a B.C. rating of about .267. Stretch to the insanely long Berger 90-grain .224 Match VLC Target bullet and B.C. jumps to .551. That might seem like an impressively high B.C. until you consider the 750-grain, 50-caliber Hornady A-Max. It’s B.C. is 1.050! If it were filled with gold instead of lead its B.C. would be even higher.

Ah, but not many of us care to haul around, let alone fire, a 50 BMG. So we compromise with our more middling calibers of which the 6.5/264 seems a pretty good compromise. Build one weighing 140- to 147-grains and it’s right in the weight class considered ideal for deer-sized game, capable enough for elk and even moose with good shot placement. Maximize its shape for minimum drag (a long, pointed, tapering nose and boat tail) and you end up with a fairly high B.C. in the .600 to .700 category. Fuel this with about 40- to 50-grains of powder and you reach speeds of 2,700 to 2,800 fps. In a fairly light, easily handled 7-pound rifle such a load shouldn’t abuse anyone’s shoulder with more than about 18.5 foot-pounds of recoil at about 13 fps velocity. That’s a bit less than the average 130-grain .270 Winchester round recoils.

Everyone knows or at least has an idea that the .270 Winchester is a beloved and thoroughly proven performer on whitetails, pronghorns, mule deer, caribou, black bears, elk, moose and even grizzlies and brown bears. Not everyone knows that the three 6.5s under discussion here, with the right bullets, can deliver more energy and flatter trajectories with less wind deflection than the 130-grain 270 Winchester load. So let’s look at each a bit more closely.

This cartridge has been taking game since 1891. That’s about the same time smokeless powder came onto the scene. Surely it is too antiquated to compete with the 6.5 Creedmoor, right? Wrong. Let’s remember that a cartridge is merely a convenient package for holding powder and bullet with a primer handily stuck in the bottom to ignite the fireworks. The Swede is a fully modern, bottlenecked case with a 25-degree shoulder. It’s just 1/4-inch longer than the Creedmoor case. One negative you can hang on the Swede is its overall length of 3.15 inches — about 1/3-inch longer than the Creedmoor and .260 Rem. This makes it a bit too long to fit some short-action rifle magazines when loaded with longer bullets seated well out.

The second fly in the Swede’s ointment is its allowed maximum chamber pressure of 51,000 psi as loaded by U.S. ammo manufacturers. European pressure standards give it 55,114 psi. Either is lower than the 62,000 psi set for the Creedmoor or the 60,000 psi for the 260 Rem. As a result, most Swede factory loads will launch about 150- to 200 fps slower than most 6.5 Creedmoor and 260 Rem. loads. Game will not notice the difference, but a long range shooter might. Expect slightly more drop and wind deflection from factory loaded Swedes. All of this, however, can be and is easily overcome by handloaders. The 5-grains additional powder capacity the Swede has over the Creedmoor can be used in fully modern, certified safe rifles to beat Creedmoor velocities by 50 to 100 fps according to recipes in most handloading manuals.

This 1996 release was a popular and effective target round for years before Remington took it public. It’s simply the 308 Winchester case necked down to hold a .264 bullet. Case length is a smidge over 2 inches or 0.11 inch shorter than the Creedmoor. Body diameter is identical. Power capacity is a grain or two more. Factory loads nearly always match 6.5 Creedmoors. Handloaders can safely get 50 fps more velocity, maybe 100 fps. No big deal. Of course, the .260 Remington perfectly fits short-action rifles and magazines, since its parent case pretty much established those dimensions.

All of this raises the obvious question: with the .260 Remington in the stables, why did anyone bother saddling up the 6.5 Creedmoor?

Target shooting perfection. That’s what engineers had in sight when crafting the Creedmoor. They knew what the 260 Remington and the best, high B.C. .264 bullets could do. They just wanted to tweak the case to address arcane little handloading and precision accuracy niceties, mainly case neck length ideal for holding long ogive match bullets without protruding into powder space, yet overall cartridge length short enough to fit the shortest short-action magazines. The desire was to have those long ogive target bullets just kissing the rifling lands when chambered. That was the goal for the Creedmoor. Judging by its amazing popularity in various long-range shooting competitions, it has succeeded wildly.

Why the fixation on seating long bullets to kiss the lands? Precision target shooters discovered long ago that bullets seated just touching or almost touching the rifling lands shot more accurately because they started their journey more precisely aligned with the bore. There was less chance they’d cant or tip slightly and deform when slamming into the raised portions (lands) of the bore. The theory’s been proven time and time again so, if that’s what nitpicky target shooters want, why not give them a cartridge specifically designed to make that easy?

By the way, it’s often said the 6.5 Creedmoor is strictly a target cartridge because that’s why and how it was engineered. But that doesn’t mean it’s not a suitable hunting round. While it does a few arcane things appreciated by target shooters, it doesn’t NOT do anything hunters need. It’s certainly not the fastest 6.5mm on the prairies, but then neither are the Swede or .260 Rem., yet they’ve been fire tested in the hunting fields extensively. So long as you fling the same good quality hunting bullets from the Creedmoor as you would the Swede and .260, performance on game will be identical. It’s the bullet that does the killing, not the cartridge.

Which Should You Choose?

Choose the 6.5 Creedmoor If…

If you’re the pragmatic sort, the 6.5 Creedmoor is your baby for these reasons:

The Swede is your match if you’re the romantic, nostalgic type who loves history and tradition. This cartridge has a rich history in competition, warfare, and hunting around the world. It has taken thousands of Scandinavian moose, red stags, reindeer, brown bears, wolves, and capercaillie. In Africa it’s probably taken ever big game animal from 10-pound duikers to 12,000-pound elephants. You can find it chambered in beautiful old Mausers and Winchesters and dozens of European rifles — including drillings and probably vierlings (four barrels) with patina and history. The 6.5×55 Swede has style. It has class. And it can take game every bit as effectively as any Creedmoor at sensible hunting ranges. With European loaded ammo it’s about 100 fps FASTER than the Creedmoor.

Whichever 6.5 you pick up, make sure it has a fast twist barrel. Most Creedmoors are set up with 1:8, most .260s 1:9, and most Swedes 1:8, but there are variations, some at 1:7.5 and 1:9. If the trend toward extreme range ballistic performance continues, as it probably will, longer and higher B.C. bullets will flourish, requiring faster twist barrels in order to stabilize them. Many of the old military 6.5mms were engineered to handle 160-grain bullets, but they were round nose and no longer than the longest 147-grains of today. Given the limited powder capacity of these short-action 6.5s, they probably won’t be asked to push bullets much heavier than those currently on the market. That will become the domain of bigger volume cases like the .264 Win. Mag., .26 Nosler, and 6.5-300 Weatherby Magnum. We might need to investigate those soon, too.