After shooting more than 1,000 arrows through 9 new compound hunting bows, we picked a winner 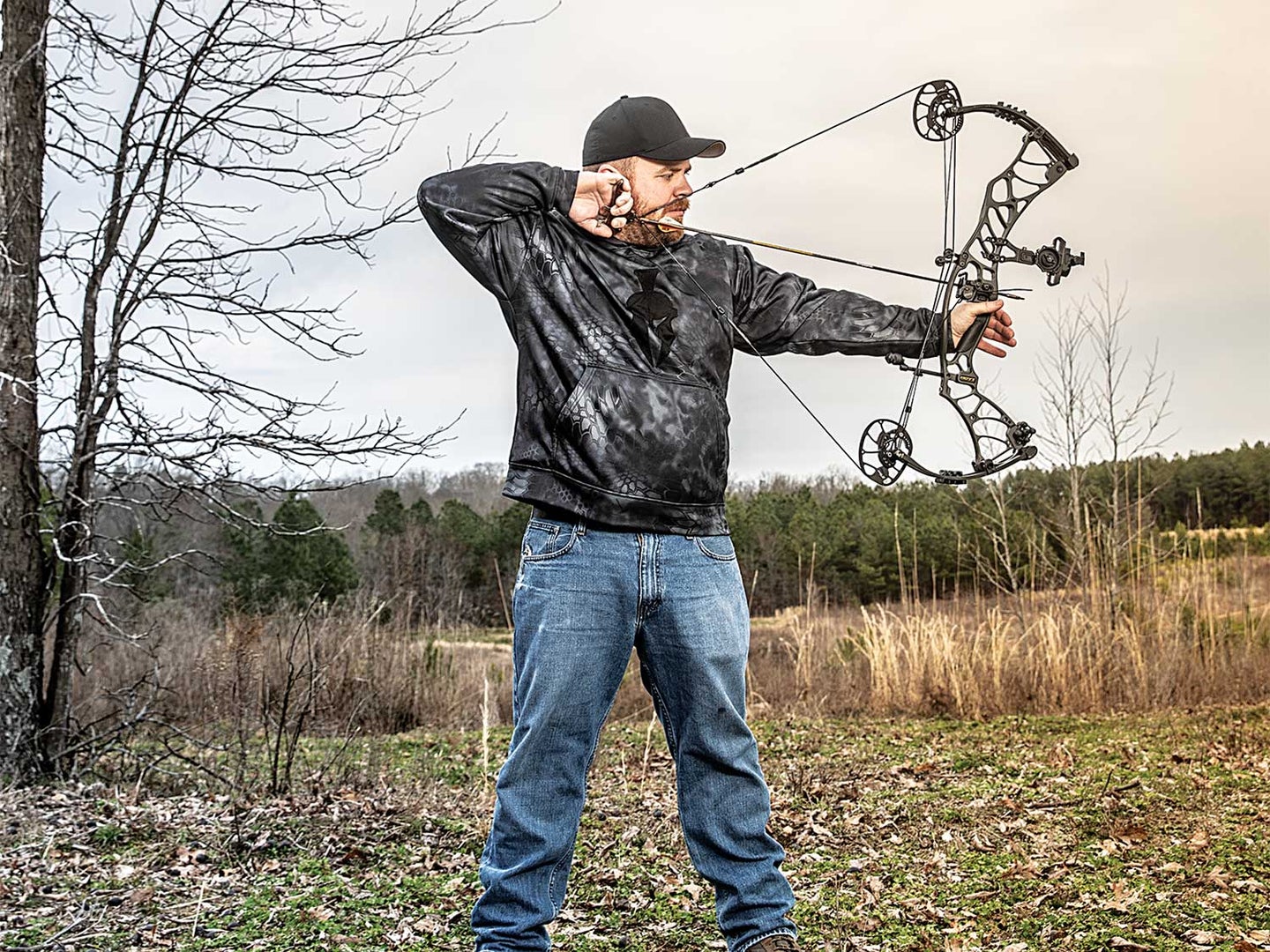 On the one hand, Danny Hin­ton is a stoic guy with an engineering background. On the other, he’s a die-hard bowhunter and the former owner-operator of an archery pro shop. He has, in other words, perfect blend of technical and practical knowledge for our bow test, and he’s been a test-panel member for years. So I didn’t take it lightly when he declared the 2019 field of compound bows to be the best he’s ever seen. And I did agree with him.

Still, not everyone here gets a trophy. It’s our job to find the very best equipment, and at the end of our most grueling assessment yet, we did just that. Here’s the scoop. 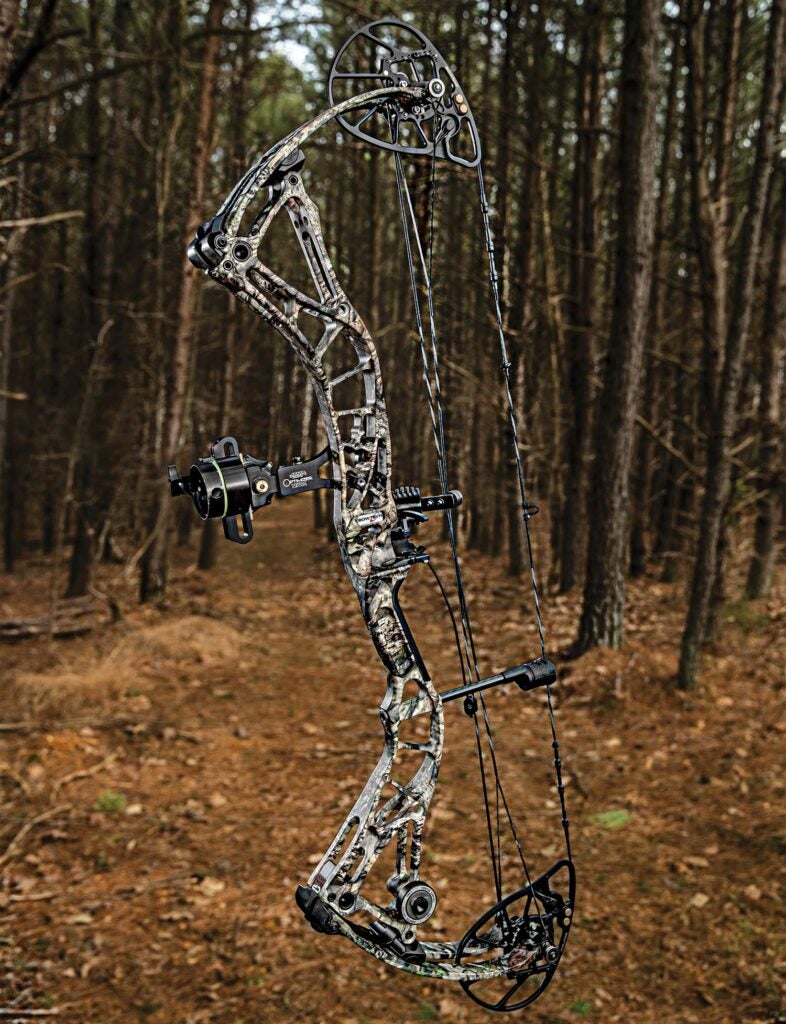 This bow ranked best in nearly every category, easily winning this year’s test. For several years, a signature Bowtech feature has allowed the shooter to change the feel of the draw cycle to suit his or her shooting style. Older models used a disk with three possible settings, but newer models, including the Realm SR6, use a module system that lets you choose either the Comfort or the Performance setting. This is much more user-friendly. We tested the SR6 on both settings but scored it on the Performance setting. Even with that more demanding draw cycle, the bow was one of the smoothest shooters in the test, and it was also the test’s speed champion, at 349.1 fps. Part of that is due to the strategically placed weights in the Overdrive Binary cam system (the feature is easy to see; the weights look like pairs of brass buttons on both cams).

The Realm SR6 was also the accuracy winner, with our four panel shooters averaging 1.07-inch groups. Objective testing showed that it had little vibration, earning it third place in that cate­gory. At 86 percent efficiency, it was the most efficient bow in the test. Its only stumble was in the noise test, where it finished in the middle of the pack. The Realm SR6 handled well and looks good too. 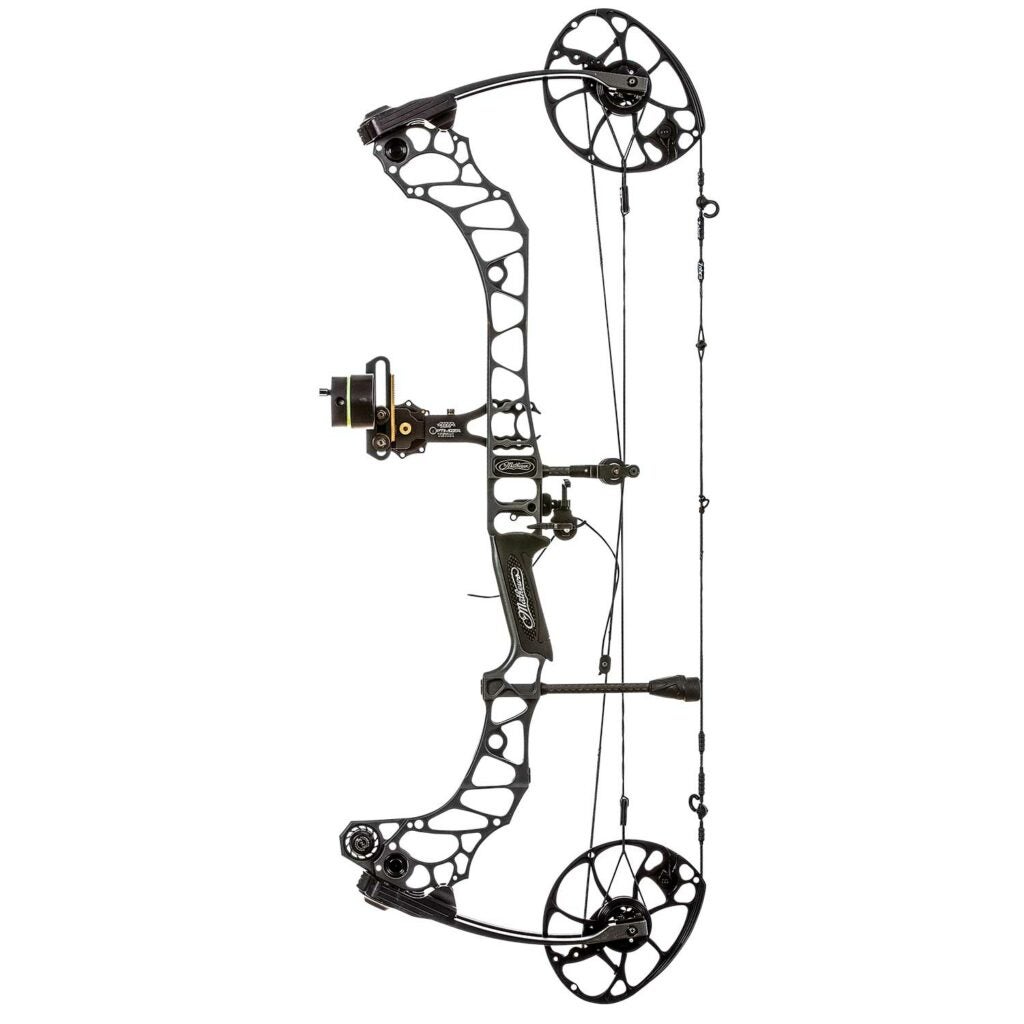 It’ll be no surprise to fans of the MATHEWS Triax and Halon series that the Vertix was the quietest and most vibration-free bow of the test. It uses the Crosscentric cam, but it has an updated Switchweight system that allows you to change peak draw weight and length by swapping a module. The Vertix also has a dovetail mount on the riser to accommodate QAD’s new UltraRest MXT—a system that could send Berger bolts the way of the single cam.

The Vertix was the heaviest bow in the test at nearly 4.7 pounds. In addition to middle-of-the-road speed (337 fps), the draw cycle was more demanding than we expected, and it lost ground in the accuracy category, with our panel averaging 1.37-inch groups. 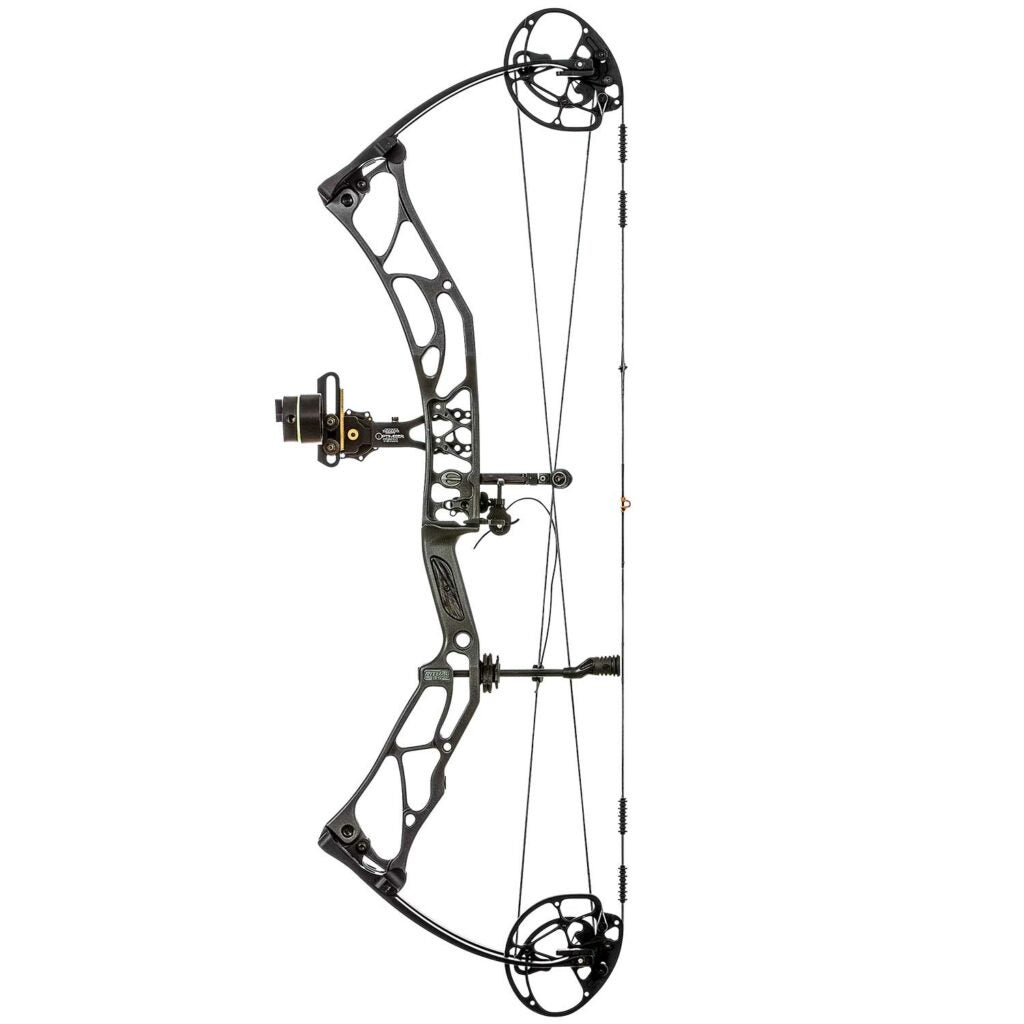 For a few years, long-axle-to-axle bows rode a popularity wave that’s since subsided. But the Elite Ritual 35 proves that a longer bow can still hold its own. We found that this bow settled on target better than anything else in the test, and that helped its handling score. It finished only slightly behind the Bowtech in both the accuracy and draw-cycle categories. We averaged 1.12-inch groups with it (second overall), and across the board we loved the bow’s smooth draw cycle, solid back wall, and deep valley.

The Ritual 35’s middling scores in speed (336.7 fps), noise, and vibration kept it from finishing higher. 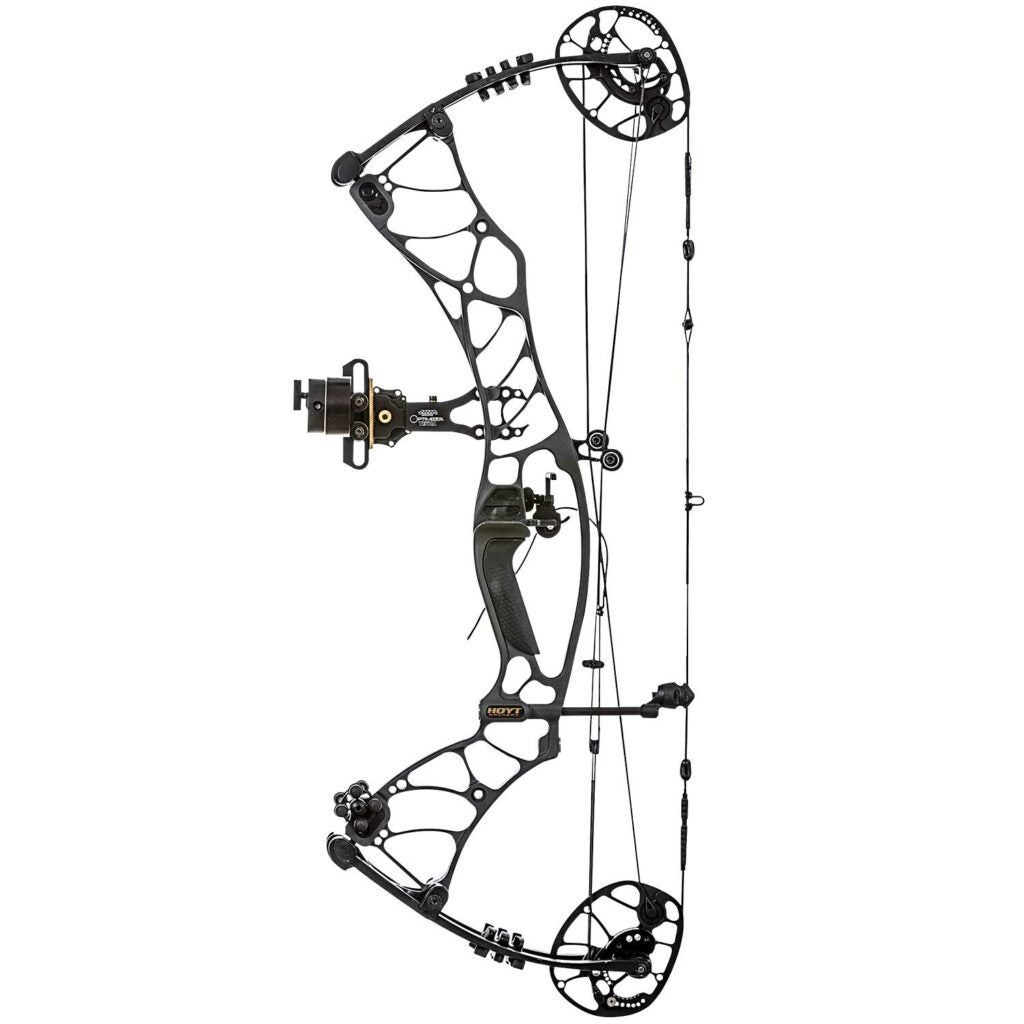 One of the handful of bows to break 340 fps, Hoyt’s new Helix was also the second-quietest bow of the test. It scored solid marks for (lack of) vibration, accuracy, fit and finish, and handling too (though not everyone liked its grip). We docked the Helix some points on draw cycle because it’s a little demanding on the front end; this bow certainly isn’t as comfortable to draw as the three ahead of it.

It has a new ZT (Zero Torque) cam system that’s available in two sizes to suit draw-length ranges of 25 to 28 inches, or 27 to 30 inches. It also has an interesting new Split-Cable system, which reportedly eliminates the need for a flexible cable guard. 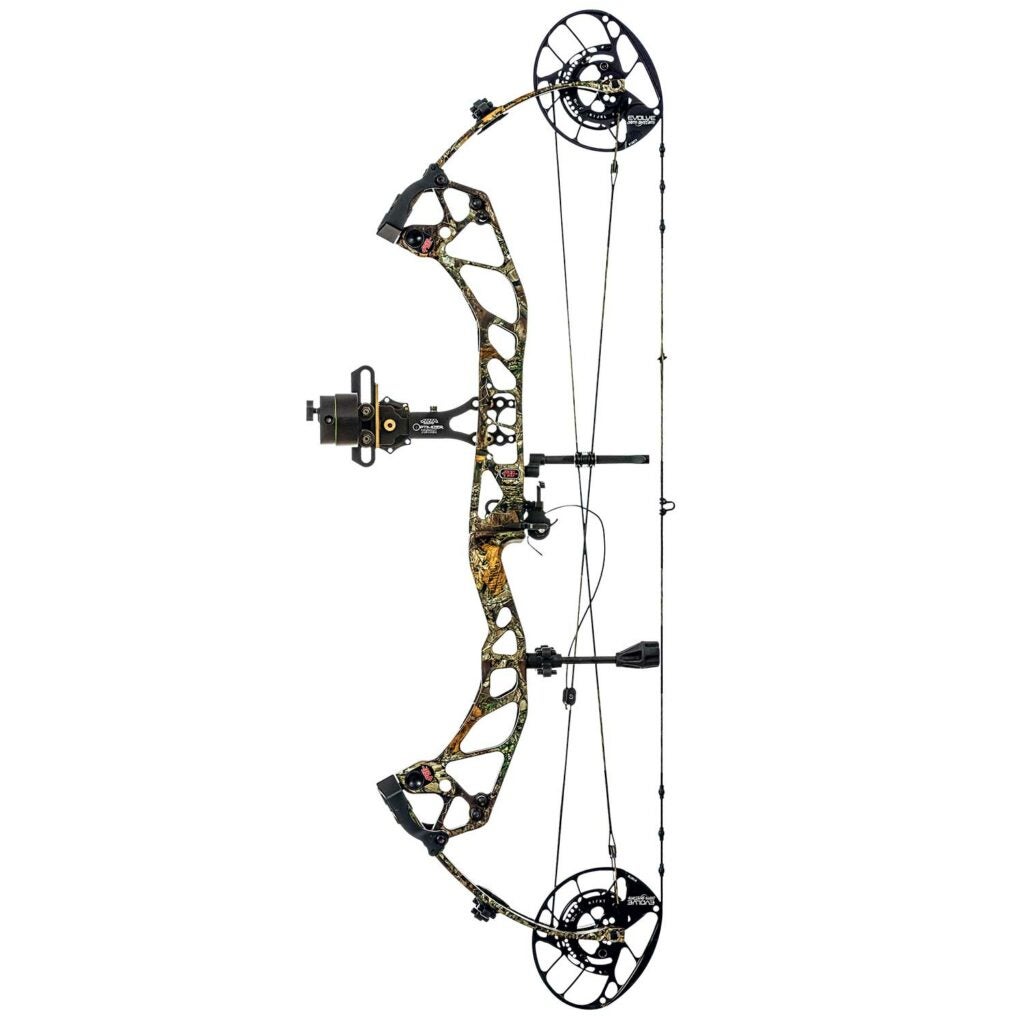 PSE Archery’s Evolve nearly won last year’s test, and several of us liked this year’s Evoke 31 even better. The bow’s ultimate ranking even with that improvement speaks to the caliber of the competition this year. The Evoke 31 uses the Evolve Cam System, which provides 90 percent let-off. Its updates include a caged riser for enhanced strength, but it was still one of the best-handling models. It was the fifth-fastest bow of the test, at 339.7 fps.

The bow fell in the rankings in a few categories. Our panel averaged 1.48-inch groups with it, which was larger than the overall average. Like last year’s Evolve, the Evoke 31 finished near the bottom in both our noise and vibration tests. 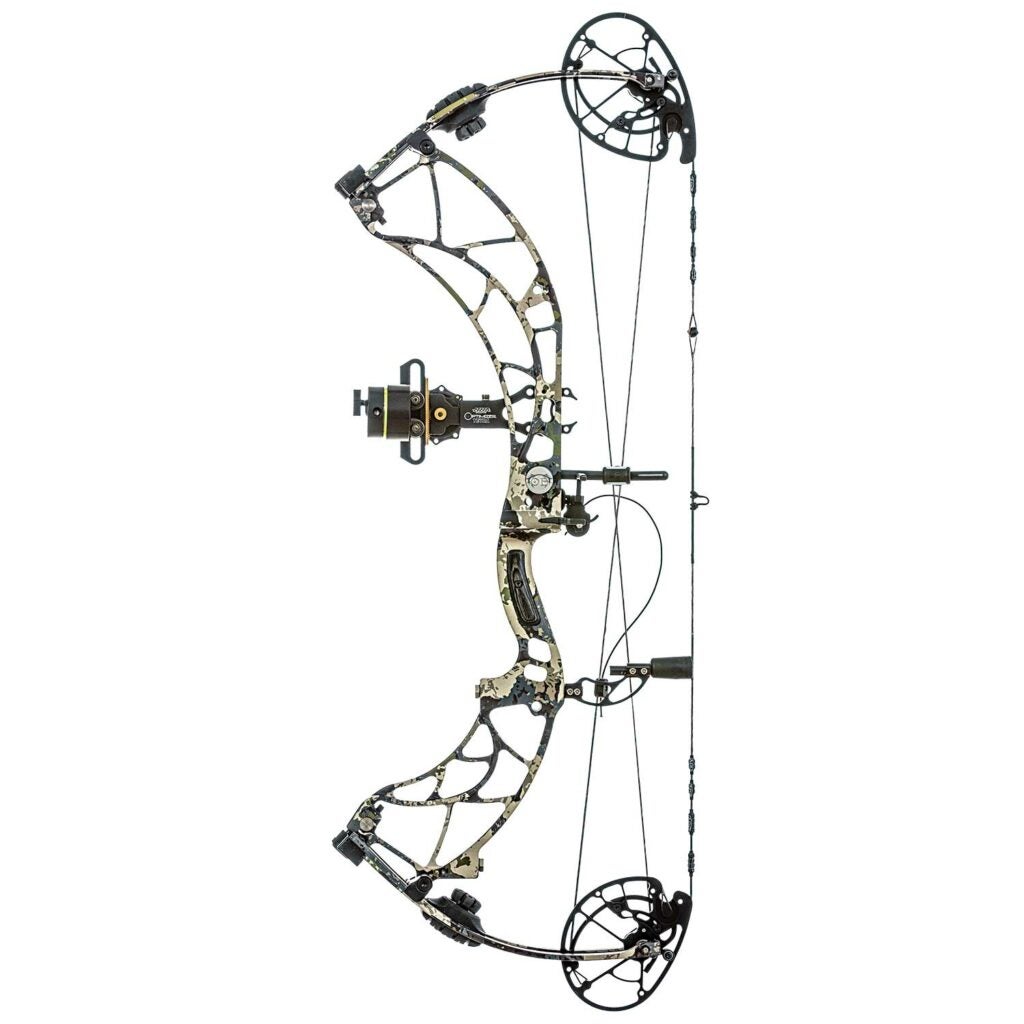 The FX30 was another trim, lightweight bow that we shot pretty well, averaging 1.38-inch groups. It scored well in vibration, and in the middle of the pack for noise. At slightly under a grand, we gave it good value marks.

The Obsession had a hefty load on the front end of the draw cycle, but it fell into a decent valley with a solid back wall. That wouldn’t have been a big deal had the Obsession hit its advertised IBO of 360 fps. Instead, it was the second-slowest bow of the test at 333.6 fps, a misrepresentation that didn’t endear it to anyone on our test team. 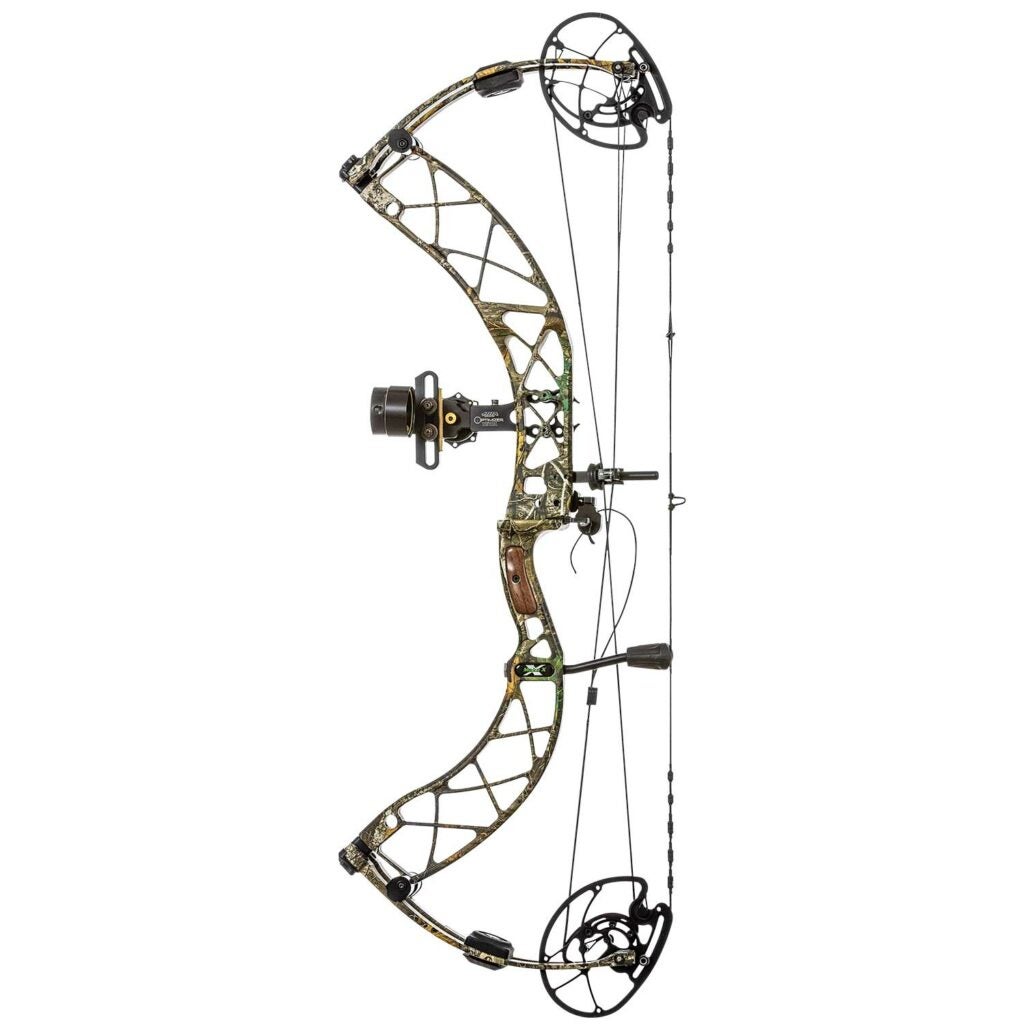 The 5-inch-brace-height Mako X looks fast, and it is. At 343.1 fps, it was the third-fastest bow in our test. (Though it still clocked in at 21 fps below its advertised speed.) It was also the lightest bow at 3.9 pounds. You’d think such a combination would make for a rattling contraption, but it didn’t. The Mako X had the second-least amount of vibration in the test.

The Mako X has the harsh draw cycle of a speed bow, and we docked some points for that. It also finished in the bottom third of the accuracy rankings, with our testers averaging 1.51-inch groups. We found it to be a little tough to settle on target, costing it some points in handling. 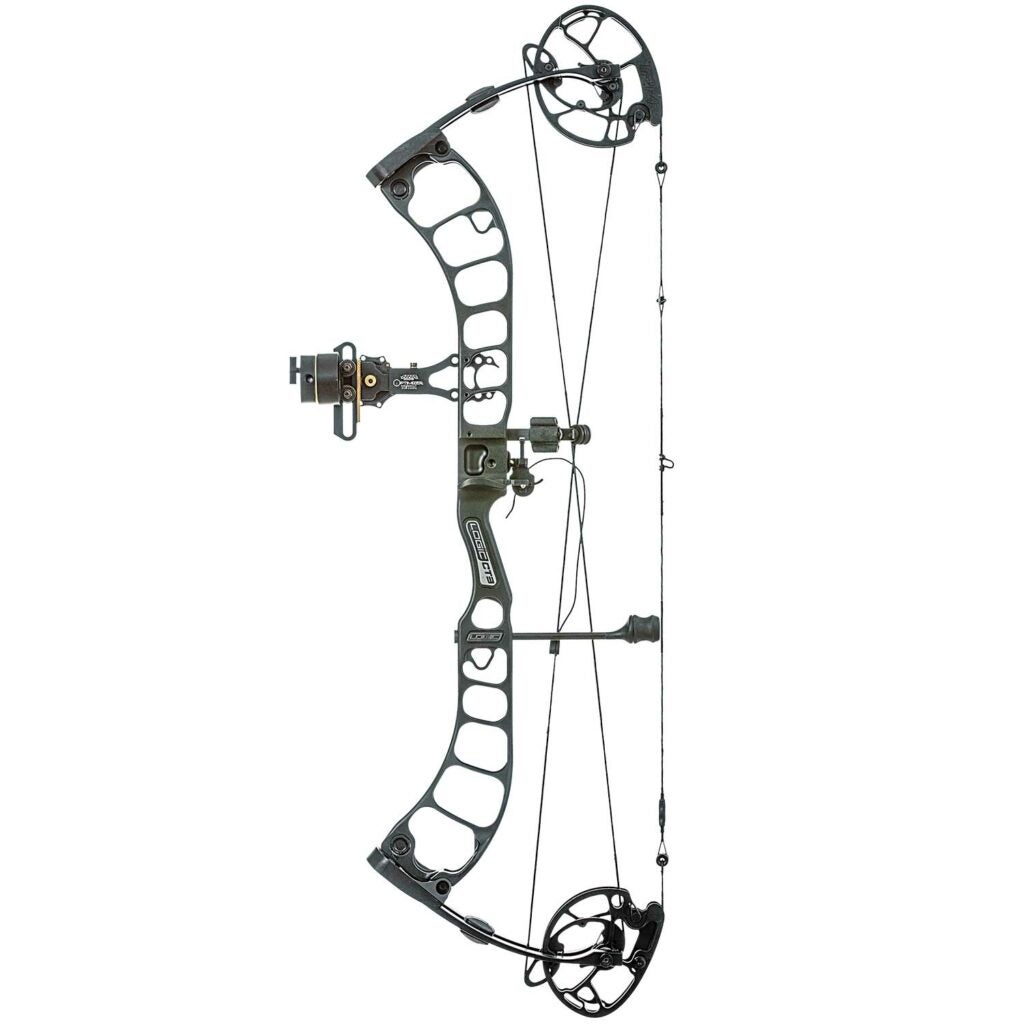 The Logic CT3 didn’t drop the ball, but it finished middle-of-the-pack in most categories. It landed near the bottom of the field in accuracy, and at 326.4 fps, it was the slowest of the test. Although the bow had arguably the best back wall of any bow tested and settled on target nicely, we averaged 1.6-inch groups with it.

Still, if you’ve come to like the style and signature feel of a Prime, you’ll love the CT3. It’s a better bow than last year’s original Logic in just about every way, but especially value—the MSRP on the Logic CT3 is a full $200 less than 2018’s model. 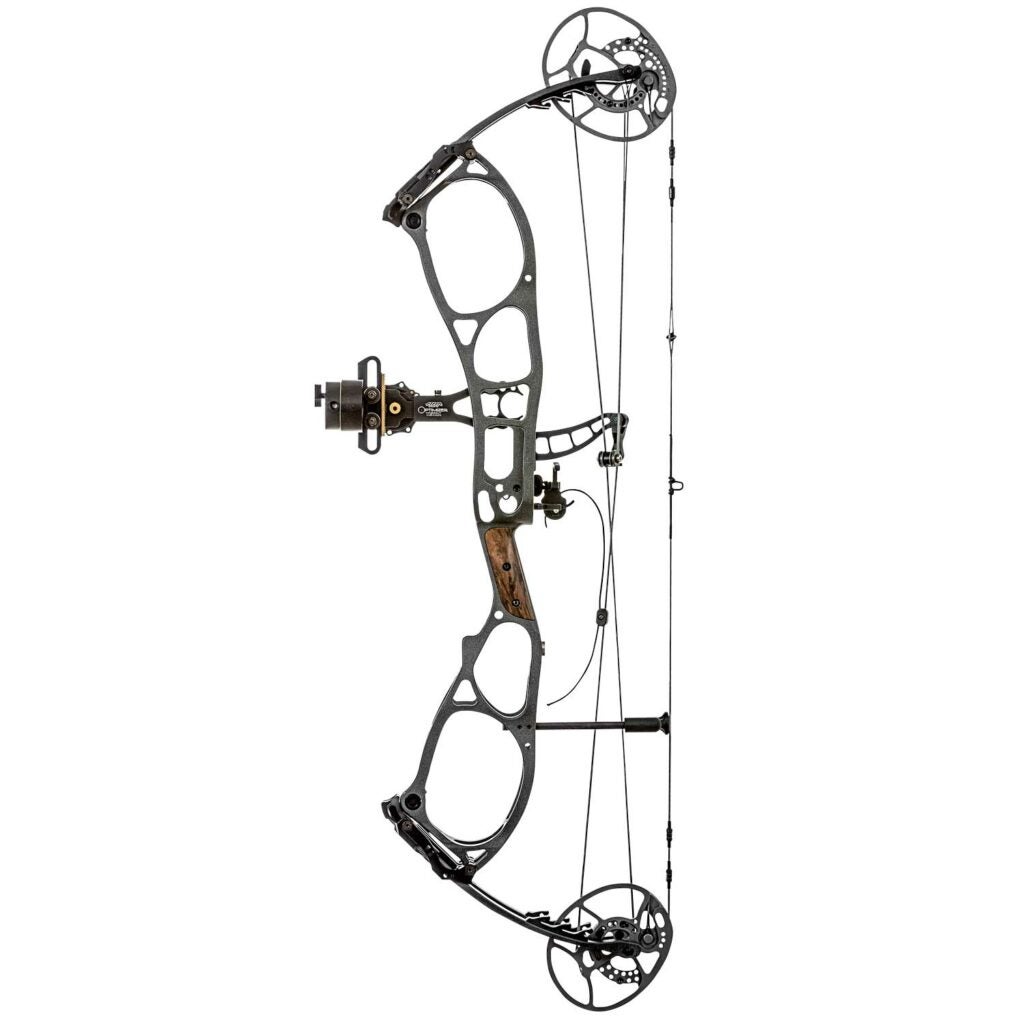 The shoot-through riser on the Perception made the new Bear a visual standout. It looks heavy but is surprisingly light at 4.3 pounds. It was speedy, second only to the Bowtech at 345.5 fps, and the fit and finish were the best I’ve seen from Bear.

But the Perception had problems, including more vibration than any other model. Shoot-through risers are popular with some target shooters, but we found loading arrows to be a hassle that would be amplified with broadheads in a treestand. Worse, it was the most difficult bow across the board for our team to shoot. It had a spongy back wall, and we found ourselves fighting the valley at full draw. Combine all of that with a high price tag, and this bow couldn’t compete.

This year, we upgraded our sights to single-pin Optimizer Tetras from HHA Sports ($270) and our rests to HHA Virtus drop-aways ($150). Combined, those accessories contributed to the tightest arrow groups we’ve ever shot. All bows were fitted with peep sights and D-loops, and each tester used his own arrows. Both our compound and crossbow testing were done with Rinehart bag targets.

We partnered with Stress Engineering Services, a consulting firm in Mason, Ohio, that tests outdoor equipment ranging from firearms and treestands to off-road and fishing gear—but archery equipment is one of its specialties. Objective testing for noise, vibration, speed, and efficiency takes place in the Stress lab with bows set to IBO specs.

All bows are shot three times from a Hooter Shooter inside a semi-anechoic (echo-free) chamber. We check speed with two chronographs, a 350-grain fletchless arrow, and Whisker Biscuit rest. Sound is measured with multiple microphones, and three vibration readings (up/down, side to side, and fore/aft) are taken with a micro-accelerometer. A hand-arm perception filter is applied to finalize the ­vibration measurement. Stress maps out draw-force curves and measures the efficiency of each bow’s cams (how much energy from the draw is transferred to the arrow). These measurements aren’t given numeric scores, but they are considered in the draw-cycle evaluation, which is also a subjective assessment of the bow’s back wall, valley, and overall comfort.

For the remainder of the test, which is subjective, bows are set to 28 inches and 60 pounds. Then we give ’em hell for three full days on the range. The test team—consisting of OL executive editor Alex Robinson, Field & Stream executive editor Dave Hurteau, archery tech Danny Hinton, and me—then evaluates them for handling, fit and finish, and accuracy and forgiveness by each of us shooting a series of five 3-shot groups from each bow at 25 yards and averaging the groups for each bow. The most important categories—speed, draw cycle, and accuracy—are double-weighted. After that, the value score (bang for your buck) is assigned. The bow that ranks best overall is named Editor’s Choice. We did not award a Great Buy this year. They were all too damn expensive.