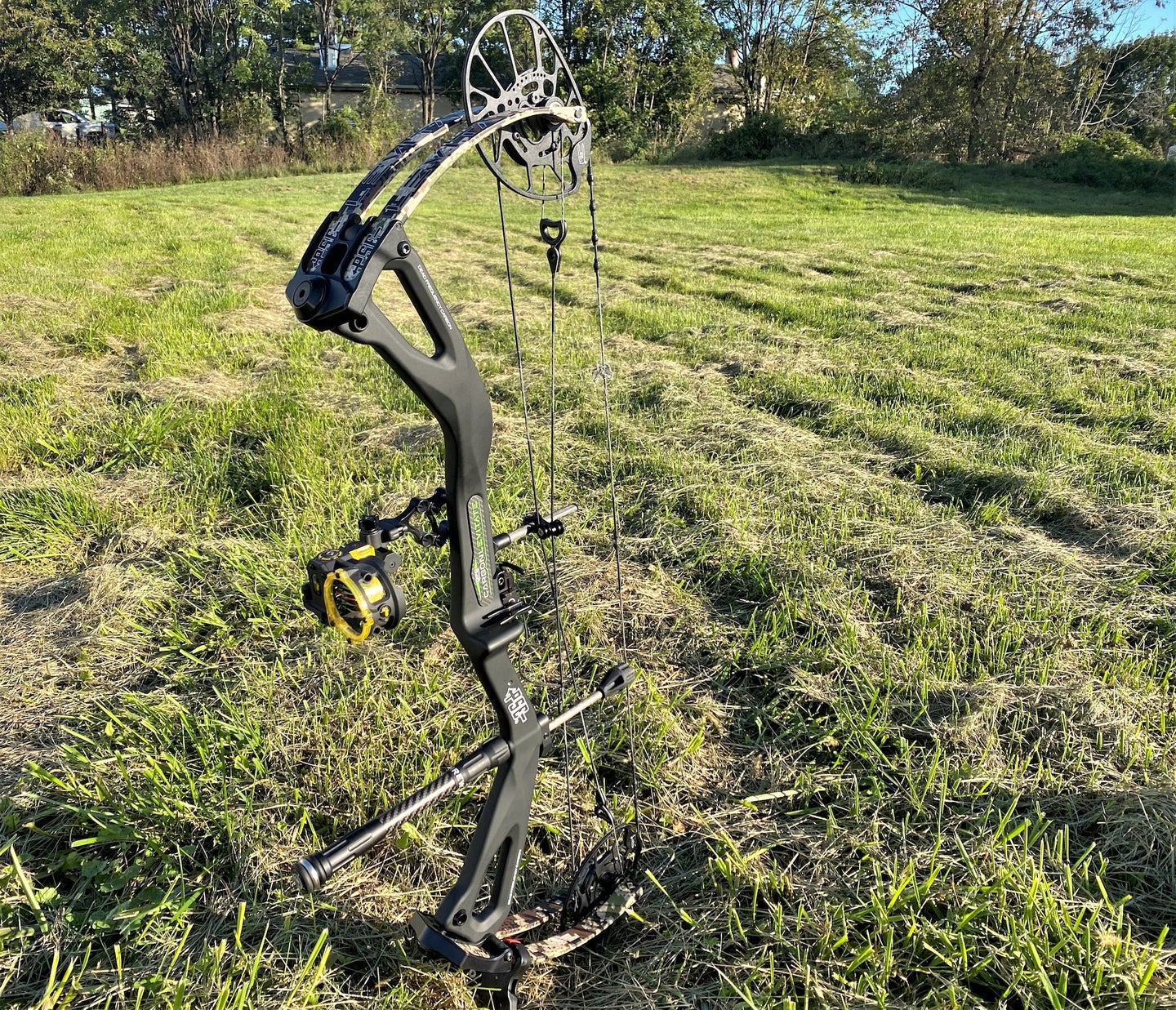 Backcountry, high-altitude, and other bowhunters concerned about how much weight they haul to their hunting grounds historically have loved carbon compound bows because they are light. But often, those same bowhunters found that to get their carbon bows to shoot well—especially at long range—they had to add weight to them. And that defeated the main reason they got a carbon bow in the first place. Enter the 2022 PSE Nock On Carbon Levitate. With detailed input from longtime archery industry insider John Dudley, PSE has raised the bar for carbon bows. Turns out you can build an ultralight bow that shoots well without weighing it down.

The Levitate measures 32 1/4 inches axle to axle, with a speedy, 6-inch brace height. It employs rotating modules that can adjust draw lengths from 27.5 to 31.5 inches, and is available in peak draw weights of 60, 70, and 80 pounds. But the big number we’re here to talk about is the mass weight of this bow. It’s 3.6 pounds.

The limb pocket and limb stance of the Levitate are significantly wider than those of its predecessor. The widths of the Levitate’s pocket and limb stance are the same as for the Evo Evl—PSE’s 2021 aluminum hunting bow. A wide limb creates a stable shooting platform. They also handle the stress created by the big cams manufacturers are choosing these days to produce insane speeds.

And speaking of cams, the Levitate features a new one—the E2 cam. It’s a descendant of PSE’s wildly successful Evolve cam, which caused bowhunters to fawn over its super-smooth draw cycle, adjustable let-off, and blazing arrow speeds. The E2 is a little more aggressive, but it’s also a little more efficient. With the Evolve cam, the split yokes connected to the cam at the axle both lean in toward the cam. The E2 cam is wider at the base so the yokes lean less.

To explain the effect of this widening, Dudley—the Pied Piper of the Nock On nation—said to think about using a lat pull-down machine at the gym.

“If you pulled on the cable at an angle, instead of straight down, the weight would feel heavier,” he said. “It’s not as efficient as pulling in a straight line.”

And that extra tension equates to wasted energy. It’s less efficient converting the energy put into the bow to energy spit out by the bow.

Add to the wider cam a heftier, quarter-inch axle and beefier cam bearings. Again, all of this was done to produce a more stable shooting platform, which is a better shooting bow. And don’t forget, the Levitate includes all these bigger and beefier features, but the weight only increased by .1 pounds over the Carbon Air Stealth.

There’s no question the biggest advancement built into the Levitate is the use of a new, proprietary carbon for the riser. PSE is calling it Dead Frequency Carbon. I’m not a scientist, so I can’t tell you what makes this carbon different. And eager to keep a good secret, PSE isn’t saying either.

But what is immediately noticeable is the lack of hand shock and the lack of noise produced when the string is released on the Levitate. I’ve shot many carbon bows over the years, and, among the ones that weigh as little as the Levitate, the Levitate is quieter and thumps less than any of them. There have been carbon bows that felt similar to the Levitate, but they were a fair amount heavier.

As I said, you can improve the shooting experience of most carbon bows if you add weight; but then you negate one of the leading benefits of a carbon bow.

Other prominent features of the Levitate are the inclusion of the Precision Buss Tuning System (PBTS), which allows for yoke tuning to make tiny adjustments to cam lean while trying to attain perfect arrow flight; the addition of a rear stabilizer mounting hole; and a pinned, straight-bar cable arm fitted with a cable roller.

One of the first things I like to do when setting up a new bow is to mount a front stabilizer plus a side rod, adding a considerable amount of weight to the bow. In talking with Dudley about the Levitate before my loaner arrived at Lancaster Archery Supply, he reminded me that the Levitate is meant to be hunted with minimal weight added.

Dudley told me he hunted with his bow for several weeks in September above 11,000 feet, and so he kept his bow under 5 pounds. At a high elevation, bowhunters want their gear to be as light as possible. Dudley added a drop-away rest, a single-pin Spot Hogg sight, and a short stabilizer. And he suggested that I set up my test bow in a similar fashion.

So when my loaner arrived, I added a five-pin Trophy Ridge sight, a QAD drop-away rest, and an 8-inch Shrewd Rev X stabilizer with a 1-ounce weight on it. The result? My total rig weighed 4.85 pounds. I couldn’t believe it.

I set the bow’s draw length to 29.5 inches, the weight to 70 pounds, and the let-off to 90 percent. That setup launched a 475-grain arrow at 296 feet per second through Lancaster Archery’s shop chronograph. That’s pretty good speed for an arrow that heavy.

The test that really blew me away, however, was the range test. At 20 yards indoors, I easily stacked three into the X ring of a 40 cm target face. Next, I headed outside and shot three- and four-arrow groups at an 80 cm target face at 30, 40, and 50 yards. At each distance, I was able to shoot groups where you could pull all the arrows out of the target with one hand.

Those groupings would surprise me from any new bow, especially from one set up at under 5 pounds of total weight. The Levitate holds and shoots like a dream without adding a bunch of weight.

That’s the Holy Grail of carbon bows. Typically, I have to weigh down carbon bows a fair amount to be steady and consistent with them. Not the Levitate. The wider limb stance definitely helped, as did the lack of heavy hand shock.

I took photos of my groups and immediately texted them to Dudley.

“That’s pretty much my life,” he wrote back. “It’s the most accurate hunting bow I’ve ever had.”

What the Carbon Levitate Does Worst

I can’t knock the Levitate’s performance. It did everything it’s advertised to do.

But that doesn’t mean it’s perfect. This bow is expensive—$1,899 retail. That’s one of the main drawbacks of carbon.

And even though this bow is a dream to shoot and a dream to carry for miles on end, some bowhunters won’t even look at it because of its price. They’ll deal with extra weight before they’ll pay basically double the cost of an aluminum bow.

Also, depending on where you live, you might have trouble finding one of these bows. Because of the way they’re made, PSE is unable to crank out big numbers of Levitates quickly. That means some bowhunters might not be able to find one near them to even take for a test drive, let alone buy. That’s not necessarily the bow’s fault, but it is an issue bowhunters are likely to encounter when seeking out the Levitate.

What the Carbon Levitate Does Best

It’s a shooter. And it’s ultralight. So far, in the archery world, that has been an elusive combination. But PSE nailed it with the Levitate.

The E2 cam, the wide limb pocket and the Dead Frequency Carbon combine forces to produce a quiet, fast, precision machine that shoots well in close and at distance. And you don’t have to add weight to the bow to get that performance.

Read Next: Best PSE Bows Ever Made

For bowhunters who aren’t adverse to dropping two grand on a compound bow before adding accessories, the PSE Carbon Levitate is at the top of the food chain.