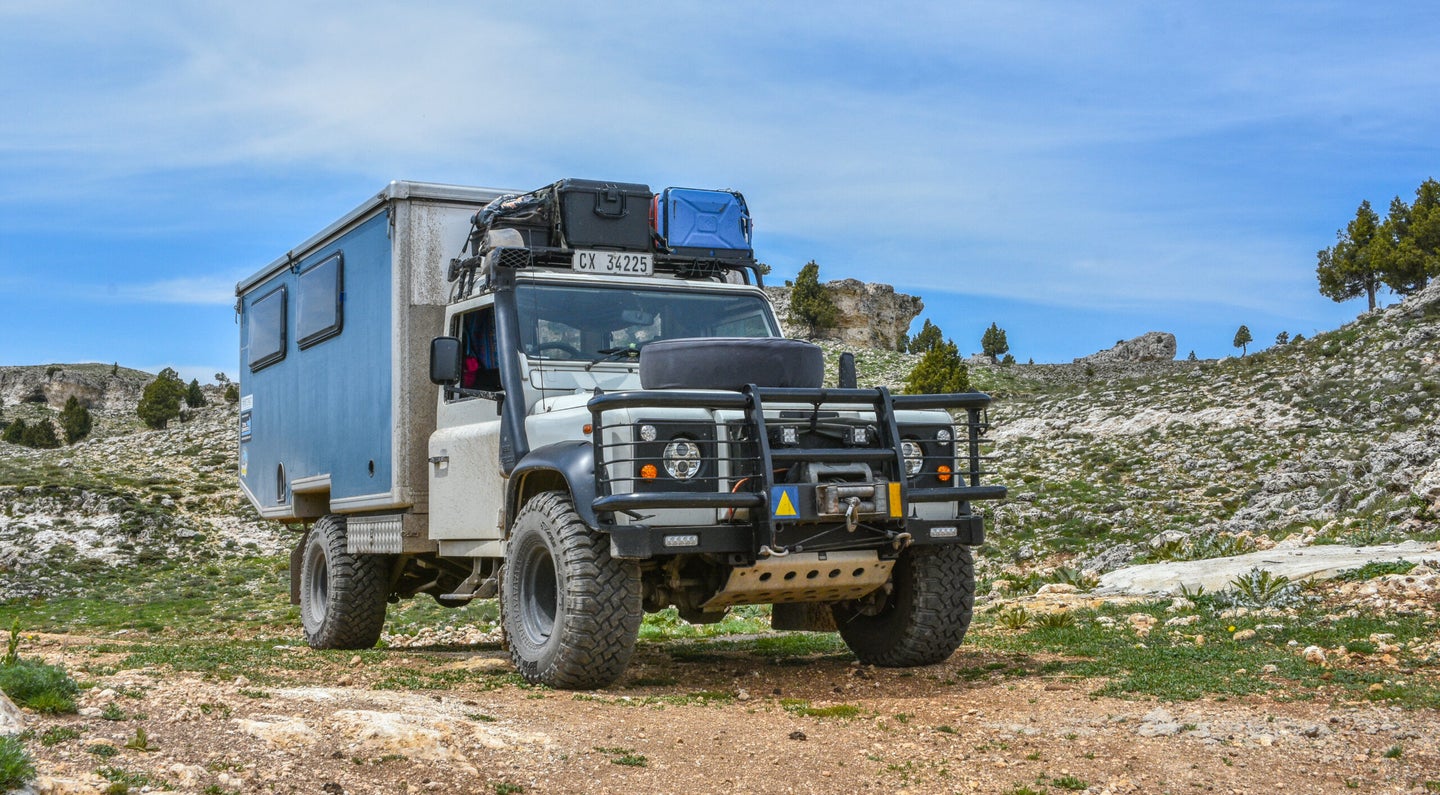 My family and I have spent much of our lives on the road, free from the constraints of a what most folks consider “normal living.” We don’t have noisy neighbors, a yard to mow, or house to sink money into. For the last decade, the four of us have shared a self-built Land Rover Defender 130. It has driven across 27 African countries, circumnavigated South America, driven from Argentina to Alaska, and explored much of Europe and Western Asia.

In 2015 my wife and two children had driven to Alaska in our original Land Rover and were returning south along the West Coast when we were invited to a gathering of Defenders in Oregon’s Alvord Desert. There we met Steve, a tall, handsome, rock-climbing University of California-Berkley professor who headed the pediatrics cancer research team. He had converted his Defender into a live-in camper by grafting on a Marshall ambulance body from a Land Rover Series 3 109. A sandstorm assaulted our group after sunset and Steve’s camper was the only refuge from the melee. The insulated walls housed nine dusty people that evening. He later slept like a baby through the night while those of us in tents stuffed ours ears with cotton wool and prayed for morning.

Steve gave us a tour of the rig once the dust settled, and the sun rose. He had a single-box bed which converted into a double bed, a small kitchen area, fridge, safe, and some storage. It was perfect for two people and with some modifications (specifically a pop top for extra sleeping space) could comfortably accommodate four. A seed had been planted, and so we set out to rebuild our Defender. It would not be a cheap endeavor and we were on a tight budget. The plan was to earn enough money to build the camper and ship it to Europe so we could travel from there to Asia.

Making Plans to Strip Down and Rebuild the Land Rover

We had worked hard on a Kickstarter campaign to publish our book, Travel the Planet Overland and made the decision to invest the profits into the build of a camper which could transport us around the world for the next decade. The cost of the camper would eventually be recouped as we would no longer have to rely on campsite fees, or a home mortgage payment, and could work and live comfortably from the Defender.

It took almost a year of hard work, planning, and design before I finally gave the project the green light. This was to be no ordinary camper. It had to be light and strong, able to go where Defender’s should while accommodating four adults comfortably. My son Keelan had grown to be a bull and the back seat of a Defender was designed for Hobbits, not large South African boy. The decision was made to remove everything from the front doors back and to build a pod with seating for the kids. To do this we needed to design the pod with a large walk-through opening between the cab and the pod which would allow us to travel without locking the kids in a sealed box. And we would be able to access the front seat while camping, important if we needed to escape hostility or potential threats while on some secluded beach in Asia. The walk through was an engineering challenge, because we had to calculate the flex along the length of the chassis and design and build a partially suspended subframe that was rigid yet flexible. The bulkhead needed to mate the pod to the cab. A miscalculation could ultimately destroy the camper if the flexibility of the chassis under full articulation was not dissipated sufficiently through the subframe.

The interior would be modular (allowing for modifications as our needs demands, and kids grew) and lightweight, built on a frame of aluminum. To work as we travelled a solar system was needed, which would be complimented by a dual battery with split charging system and a trickle charge option from shore power.

For the kitchen we sourced an outstanding fridge-freezer unit from Snomaster (the 60-litre BD/C 60 Classic with low voltage cut off and a solar powered remote control), a dual gas burner stove complimented by a Coleman collapsible oven, and a basin mated to 100 liters of water. Each occupant also needed a full-size bed to sleep in. The solution was to build a bunk bed within a security frame. The lower bunk was formed by joining the two rear seats, and the top bunk was available when the roof was lifted horizontally. A large storage box along the one wall would double as a bed and the back cushions became a bed in the walkway. My wife and daughter would share a bed if we were unable to lift the roof while camping in a city or questionable areas.

To increase the living space and reduce body roll we decided to opt for no storage cupboards above window height, and installed five large windows for maximum light and air flow. A large rear door opened horizontally and allowed us to extend our living area to the outdoors. When camping in a city, we locked down the vehicle and slept inside inconspicuously. But on the beach or in the mountains we could pop the top, open all the windows and doors, and have a panoramic view of our surroundings.

Designing a Camper vs. Building One

In Dec. 2016, we stood in southern Florida and watched as a new friend piloted a forklift and removed a large wooden box from the back of an 18-wheeler. A German owned company, Total Composites, had agreed to supply us with the camper panels, windows, glues, and sundry in exchange for us cataloging the build which you can watch in the above YouTube video.

Time was of the essence though as the panels arrived a month behind schedule and my wife had already booked flights from Boston to the United Kingdom and booked the shipping of the Defender from Miami to Southampton. We had 42 days to complete the entire build, about 142 days short of the time I needed.

Deconstructing our beloved Defender was heart breaking. She had faithfully transported us across three continents and we adored every inch of her. We began by removing the rear doors and seat box, then the roof and the rear tub, all of which were cleaned and prepared for a buyer my wife found ( the parts sold for $8,000 which was $1,000 less than the purchase price of the entire vehicle back in 2009). The sale of the parts covered almost half of the rebuild budget. We now had a bare chassis up to the B pillar. To achieve that we only had to cut the 2-inch-wide sills.

With the chassis exposed we could now begin manufacturing the subframe. The work area was not a fully equipped but it had a level concrete floor and a plastic covered frame and our host Ron had all the tools. I was putting in long hours, in bed by 10 p.m. and up at 5 a.m. every day. My wife was doing the same, sourcing materials and parts while designing the horizontally lifting roof as well as the water and electrical layout, plus taking care of all logistics. Our son did the the heavy lifting and math, helping with the on the spot decisions, designs, and fabrication.

A year later, parked on the beach in Turkey next to the crystal clear Mediterranean I sipped a cold drink and gazed passed my sandy feet to my family swimming in the sea. Smoke rose from the barbecue and a breeze blew through our camper. Through blood, sweat, and tears (and about $20,000) we made our dream come true. A crossing of West Africa later that year would be a real test of the new super camper. I am proud and relieved to say it excelled and despite a few repairs and modifications to the interior. Our adventures will soon continue on a journey from Western Europe to eastern edge of Russia. There is no other way I would wish to make that trip than behind the wheel of our Defender with my wife and children by my side.

Read Next: The Best Off-Road Truck Isn’t Found in the U.S.

Graeme Bell is an author and explorer who has dedicated his life to traveling the planet by land, seeking enlightenment and unique experiences. He is the author of six critically-acclaimed books and a freelance overland and expedition journalist.