Make the Cast: The Roll Cast

The simple solution when there's no room for a back cast. 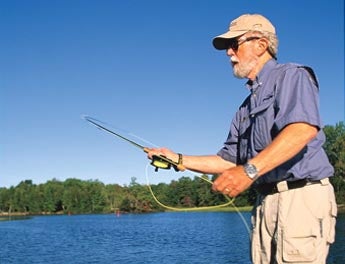 **[BRACKET “1”] ** A proper roll cast starts even before the position shown here. Begin with the rod pointed forward and the slack out of the line. Slowly sweep the rod behind you as you drag the line through the water. Most anglers do this in a semi-sidearm motion. Some find it helpful to pause for half a beat before beginning the forward casting motion in order to let the line settle on the water.

[BRACKET “2”] Make the cast with an elliptical motion. The resistance of the line in the water loads the rod, giving the cast its power.

[BRACKET “3”] Follow through by keeping the rod tip high and pointing straight ahead, never downward, as the line and fly travel toward the target.

Done correctly, the roll cast is not merely one of the most useful techniques in a fly angler’s arsenal; it’s a thing of beauty. You’ll never need to fear fishing in tight, brushy quarters again. Master the basics and you’ll be booming out casts to fish that other anglers can’t reach. Coupled with a single-haul to shoot line (see below), it can be used to launch heavy wet flies on sink-tip lines as well.

Distance and Speed Here’s what to do with the hand controlling the line during a roll cast. Pull down on the line during the forward motion of the cast to take up any slack, increase line speed, load the rod and shoot the line. The movements are similar to those made with a single-haul.