A Guide to Scented Baits for Trout Fishing

Photo by Luke Nilsson There’s no shame in using scented baits for trout–but which do you choose? 1. Corn Basics:... 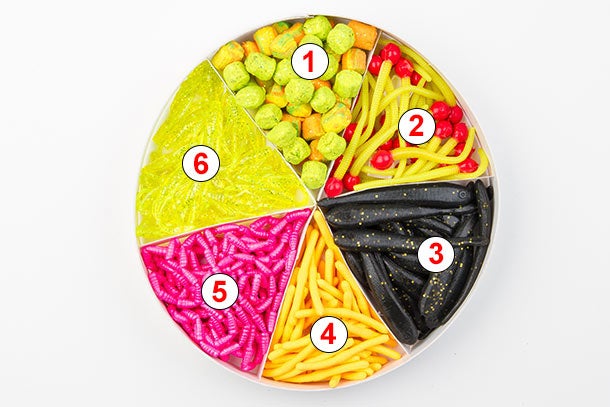 There’s no shame in using scented baits for trout–but which do you choose?

1. Corn
Basics: A buoyant kernel of Gulp! material that distributes more scent and stays on the hook better than real corn.
Rig it: Impale it on a No. 8 salmon-egg or baitholder hook. Position a split shot at the hook eyelet that’s heavy enough to prevent the corn from floating.
Fish it: Tight-line it over the boat side at night, adjusting depth to put it in the face of roving fish spotted on the sonar. Chum with canned corn and attract fish with lanterns or another light source.
Tweak: Use it with enough weight to peg it to the bottom to still-fish ponds.

2. Floating mice tails
Basics: A buoyant 3-inch PowerBait lure that combines an egg and a wiggly worm in contrasting colors–the soft-plastic rendition of an egg-sucking leech fly.
Rig it: Use a single No. 6 or 8 egg hook and split shot or a sliding sinker 18 inches or more in front.
Fish it: Cast in current and drift it along the bottom or back-bounce it down-current from an anchored boat.
Tweak: Cast it with a clear bubble in ponds and lakes. Retrieve slowly. Use just enough split shot to keep the bait from floating on the surface.

3. Leeches
Basics: Looks and tastes like real leeches; in 1- and 3-inch lengths.
Rig it: Keep the tail flat on a 1/100- to 1/16-ounce jighead so the hook protrudes halfway down from the nose, leaving sufficient tail to flick in the water.
Fish it: Cast it with ultra-light spinning gear and swim it back with constant twitches of the rod tip, creating vertical swimming action and ample vibration with the tail.
Tweak: Rig it on a micro-jig and fish below a float. Make sure the knot is tight and the leech suspends horizontally.

4. Floating fat trout worms
Basics: A 3-inch worm that floats.
Rig it: Thread it on a No. 8 short-shank salmon-egg hook so that the worm is straight.
Fish it: Another great one for bouncing through runs with the current.
Tweak: Fish it on a jighead below a float.

5. Waxies
Basics: A ½-inch-long, segmented grub in white, pink, or chartreuse.
Rig it: Hook them singly on No. 14 egg hooks or bunched on hooks as large as No. 8.
Fish it: Let scent do the work–try it below a float in ponds or streams.
Tweak: Add a Waxie to flavor wet flies fished behind a clear float.

6. Micro power nymphs
Basics: A 1-inch-long creature featuring long wiggly tendrils, flapping claws, and six legs on a buggy-looking body.
Rig it: Stick it on a No. 14 hook with enough small split shot to allow you to make short casts.
Fish it: Flip it to trout you can see in small streams, letting it drift with the current.
Tweak: Let the split shot settle on the bottom so the current makes the tendrils wiggle.