Although the term “spy-baiting” may conjure up all manner of creative connotations, this relatively new finesse tactic for bass is... 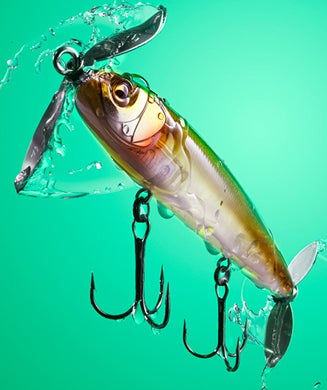 Although the term “spy-baiting” may conjure up all manner of creative connotations, this relatively new finesse tactic for bass is rather simple. It’s all about reaching and enticing suspended fish by presenting a specially designed bait on a linear course. No up-and-down, hit-or-miss stuff–spy-baits sneak into bass’ personal space better than any splashy lure.

Super Spies new bass lures that have the fishing world buzzing. Developed in Japan a handful of years ago, “supai beiteingu” or “sairento kyapucha” translates to “spy-baiting–[the technique of] silent capture.” Perhaps that’s a misnomer since the tactic involves the use of specialized lures that sport props fore and aft, but these are not your Arbogast Sputterbugs circa 1955. These slender, minnow-shaped lures measure about 3 inches long and are designed to sink with a horizontal or slightly nose-down descent. The spinning accents create fish-tempting flash and vibration.

Popular models include the Megabass Baby X-Plose, Lucky Craft Screw Pointer, Evergreen Prop Magic 75, Duo Realis Spinbait 80, and Jackall’s I-Prop 75S. Cody Meyer, a pro bass angler from California, has been honing his spy-bait skills with the latter for a couple of years.

“Suspended fish are hard to catch, and that spy-bait gives them a different look,” Meyer says. “You can reel it right through the fish, and when you kill it, the spy-bait hangs in place like an injured baitfish”

Subtle Intrusion
Duo’s U.S. lure R&D guy, David Swendseid, has logged a lot of time behind a spy-bait. His view: While the sneaky spy-bait certainly imitates forage, it also plays on the bass’ disdain for trespassing.

“People think of fish as being predatory only in the sense of feeding,” says Swendseid. “A small bait coming into an area is an obvious way to get a meal. But predators have a strong defensive drive as well, which means that they are capable of territorial protection.

“It could be that as that spy-bait enters a fish’s territory, it’s pretty non-offensive, but they eat it because they don’t want it there.”

How about the element of surprise? A spy-bait’s svelte design affords it near ghostlike stealth on its course into the strike zone. Swendseid likens it to viewing an arrow head-on versus laterally.

“A spy-bait is pretty tiny, so if it’s coming at you, it’s not kicking up a lot of commotion [like a crankbait], and it probably sneaks into the strike zone more effectively,” he says.

When It’s Hot, and When It’s Not
Principally based on visual stimulus, spy-baiting works best in clear water. And while shallow fish may bite it, the sinking bait excels in water deep enough to showcase the tantalizing shimmy it makes as it falls to the target depth.

Consider this a warm-season bait with applicability from the pre-spawn to the fall feeding fest (excluding the bedding phase). As Meyer says, spy-baits are targeting tools, not search tools, so give one a whirl anytime your bite fizzles or the fish play hard to get.

“The spy-bait is a great follow-up bait that will earn you a couple more bites when the fish lose interest in, say, a jerkbait or swimbait,” he says. “It’s also good when bass are schooling on small baitfish. They won’t hit a topwater, but you can throw that spy-bait out and let it sink right through them–it looks like a wounded baitfish falling to the bottom.”

Drop-shot not impressing the fish? Swendseid suggests giving the spy a shot. The good thing here is that you’re tracing a line through the target depth rather than relying on a static presentation. And if indecisive bass are just trailing your swimbait, switching to a diminutive spy-bait might persuade these lookers to bite.

Work It, Don’t Jerk It
It’ll test your patience, but proper spy-bait action requires a slow, methodical pace. Start with a long cast, count the bait down to the target depth (usually a foot per second), hold your rod tip low, and just creep the bait through the water.

These small lures cast and perform best on medium spinning gear with 4-to 6-pound line. Fluorocarbon’s low-visibility and sinking properties facilitate the ruse.

Lacking a lip, your spy-bait won’t deflect off bottom cover–that’s not the bait’s application anyway. But you need to maintain awareness of where it is in the water column to avoid letting the bait encounter any impediment that might capture your spy.

Unique tri-leaf prop blades allow this diminutive bait to maintain its depth on even the slowest retrieves. ($23; megabassusa.com)