A select few baits have souls—personalities that defy their production. Why one chunk of plastic or wood outperforms the next... 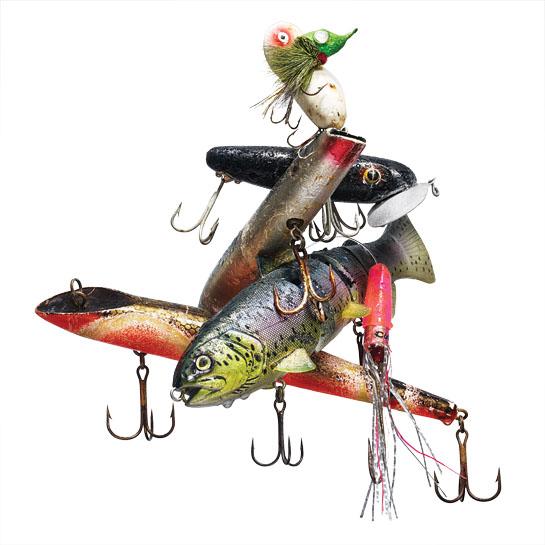 A select few baits have souls—personalities that defy their production. Why one chunk of plastic or wood outperforms the next is curious, to say the least. But these six specific lures have become favorites because they catch fish when nothing else can, to hell with explanation. Beneath the teeth marks and battle scars you can sense their desire to be in the water, looking to add to their legend.

“I’m not saying that I’d fight a man over this bait, but I can tell you he wouldn’t have enough money to buy it off of me,” says Doug Yates, referring to a black Arbogast Musky Jitterbug he’s been throwing at largemouths for the past 43 years.

“I started bass fishing as soon as I was discharged from the Marine Corps in 1971, and this was just about the first bait I learned to use for night trips,” explains the 66-year-old retired electrical engineer. He calls Sunnyvale, Tex., home, and fell in love with the giant wobble bait after catching his biggest-ever bass up to that date, a 6 ½-pound Cedar Creek lunker, in the summer of ’71. “I’ve thrown it for so long, and have so much faith in its abilities, I simply can’t imagine not using it. That said, I’ve never seen another angler throw this big plug for bass,” Yates admits.

“I only have two bass mounted: that 6 ½-pounder and a 10 ½-pounder—both caught on my Musky Jitterbug. So, maybe I would fight a man if he were trying to take it.”

Pete Maina talks to his lures. If one is not performing as it should, the 51-year-old Hayward, Wis., native will demand that it put on its dancing shoes.

“’Don’t make me bench you!’ I’ll tell a lure. Sometimes, you have to inspire the bait,” Maina says with a laugh.

But the day in 1992 when he first tested his Burt jerkbait (now produced by Musky Mania Tackle), he didn’t have to say a word.

“Man, that bait looked so good. I couldn’t believe nothing was biting it. I just started trying to make it happen in my mind. So, at the end of a long cast, I did a figure 8 by the boat, not seeing a fish. Then, out of nowhere, a muskie came up and grabbed it like a freakin’ bratwurst! I’ve caught more than 3,000 muskies, and I can’t tell you how many muskies I’ve caught on that exact lure, but it’s a pile.”

Bill Siemantel’s favorite swimbait is a Frankenstein of a bass lure. It has been drilled into, sanded, embellished, and rebuilt. All that’s missing are bolts on its neck.

“It took me 12 hours on the water to get this bait right. This exact lure was one of four prototypes that I designed for SPRO. It was unweighted and plain, so I started tweaking it and making adjustments. I drilled holes and added weight. Then, after one small adjustment, I put it in the water and it absolutely came alive! I was out on Castaic Lake for only 15 minutes when I got my first bite. She weighed 15 pounds. I had four fish that day that totaled 54 pounds. Freaking epic.”

Siemantel has since boated more than 50 bass topping 10 pounds on the lure that became the model for the SPRO BBZ1.

The saltwater version of striped bass are brutal on artificial baits, so it’s surprising that this SuperStrike darter is still fishable. After all, Mike Coppola has caught hundreds of linesiders on it, weighing as much as 38 pounds. And it’s likely this New York angler would cry giant salty tears if something were to happen to his favorite lure. “I’ve used darters for more than 20 years surfcasting the shores of Montauk [Long Island, N.Y.], and this particular lure seems to have outcaught them all,” says the 39-year-old striper addict. “I call it The Bunker Special.”

One September night in 2012 cemented The Bunker Special’s legend in Coppola’s mind.

“I caught a fish on almost every cast that night, landing 50 stripers between 12 and 25 pounds. What’s more, other guys on the rocks nearby weren’t having nearly the luck. Didn’t surprise me, though. They weren’t throwing my lure.”

“There’s just something about Pinky,” says Chris Horton, referring to his favorite little pink trolling jet. “It only cost maybe $10, but it catches dorado better than anything I’ve ever put in the water.”

Horton, a 41-year-old native of Arkansas, caught his very first dorado trolling Pinky in the Keys while on vacation around 2006. But it was on a trip several years later that he realized that the little jet was special.

“We’d been trolling all day with no action when I pulled Pinky out of retirement. She only had a couple of strands left on her chewed-up skirt. Regardless, I went ahead and clipped her to my third line. There was a naked ballyhoo in front of her, as well as a green jet. I saw a cow and big bull off the stern fight over poor Pinky. The 35-pound bull won.”

Memories of catching largemouths on topwater baits on a warm summer’s night are, well, the moments that shape a kid’s life forever, and Outdoor Life deputy editor Gerry Bethge remembers them well.

“Ralph Mundry was this crotchety old guy who spent most of his time hollering at me for invading his fishing space,” Bethge says. “Somehow, though, I ingratiated myself with him and he taught me how to flyfish.

“The only time I recall that he ever used regular spinning tackle was when the lake was flat calm and he needed to cast far. That’s when the Bassassin came out. It’s basically a foam Jitterbug, though far heavier and denser. He gave me a white one, and I caught my best-ever topwater bass on it. It looks like hell, but I still throw it on hot summer nights.”