Chinook salmon, the iconic fish of the Pacific Northwest, are back after a generation of decline. There’s no better place to catch them than at the mouth of the wide Columbia River, and no better time than this month. 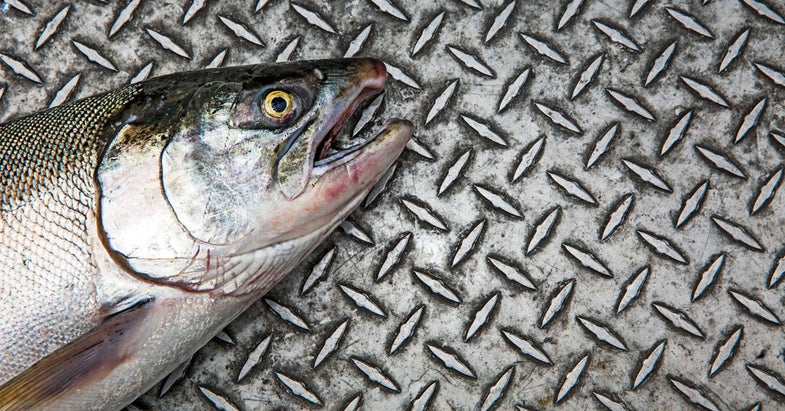 Fish long enough, and in enough different places, and you’ll recognize a treble-hook truism: When the catching is good, everyone on the water is happy and hopeful and helpful. But when the bite goes away, so does charity.

For the past 20 years, there’s been a fog of discontent hovering over the Northwest, as the region’s once-­abundant salmon have disappeared from its rivers, and fishing has been shut down from Bellingham to Coos Bay.

Blame for the salmon decline goes variously to main-river dammers, commercial gill-netters, old-growth loggers, suburban developers, and even protected fish-eaters like sea lions and cormorants. Whatever the cause—it’s probably a combination of all those culprits—the effect is widespread and seemingly permanent. Fishing boats have been retired, reels have rusted, and anglers on the Columbia River have shifted their attention to walleyes and smallmouth bass, species that may not have the tasty fillets or the totemic appeal of chinook, but that are abundant, available, and immune to river fluctuations and El Niño cycles.

So when my longtime friend Buzz Ramsey called last summer with an invitation to fish the mouth of the Columbia for salmon, I didn’t immediately accept his offer. I love to fish, but not for futility.

“Maybe you haven’t heard,” he said. Ramsey wasn’t deterred by my reluctance. He is brand manager for Yakima Baits, a Washington-based company that makes fishing lures, and he’s a widely recognized expert on catching lower–Columbia River salmon. It’s both his passion and his job to keep tabs on the strength of the seasonal salmon return. “They’re forecasting 1.6 million chinook at Astoria, and another million coho. This is the run we’ve been waiting for. Bring your kids. The more rods we have, the more fish we can keep.”

Fish On!
My son Merlin got the first bite. He was napping in the open bow of Buzz’s boat when his rod bounced twice, then bent in a deep, graceful, persistent arc. By the time he roused from his reverie—13-year-olds need their sleep, it seems—and snatched the rod from the holder, whatever was pulling his line was well on its way downstream toward the Pacific Ocean.

The rest of us passengers—photographer Tom Fowlks; Merlin’s twin brother, Ellis; and myself—laughed as sleepy-eyed Merlin tried to keep his feet and turn the fish.

Buzz wasn’t as entertained. He was busy keeping his craft, an open-bow aluminum jet boat, from colliding with the armada of other boats drifting the tidal surge. With his tiller in one hand and his signature felt hat in the other, Buzz snapped orders like a drill sergeant. Reel up the other lines! Keep your rod tip up! Grab the net! Watch the cleats! Reel in the slack! Move to the bow! Again, the net!

As Ellis frantically tried to get his line out of the water, a fish nailed his bait, and our humor was replaced by sober urgency. The two fish tangled the boys’ lines, and after some moments of indecisive panic, Merlin’s broke off. Buzz navigated his boat out of traffic, easing past other boats, whose occupants were fighting their own fish. Everywhere I looked, across a wide mile of river, rods were bent, nets were out, high-fives were exchanged. On our boat, though, the outcome was by no means certain. I stood by with the net. Tom snapped pictures. Buzz looked on dubiously as Ellis winched his fish toward the boat.

It was a bull-headed chinook, and the sight of the dime-bright salmon emerging from the dark water of the lower Columbia River is one I wouldn’t forget even if it hadn’t been repeated dozens of times over the next three days.

Over the best Labor Day weekend of our lives, we caught big hook-jawed chinooks and torpedo-shaped cohos. We caught keepers—hatchery fish that can be recognized by their missing adipose fins, which were clipped before they were released into the river as juveniles three years ago—that we introduced to our cooler after mandatory photo sessions. We caught the big, deep-sided “upriver brights” (URBs, everybody calls these 4-year-old chinooks). We caught and released wild fish so fresh from the ocean that parasitic sea lice still hung from their gill plates. We had doubles and triples, and hooked so many fish that after a while, Tom no longer fired up his camera when we brought a salmon to the net. My teenage boys giggled and joked.

Buzz didn’t do so much fishing as he did coaching, talking his passengers through tutorials in big-water salmon tactics. He showed us how to plug-cut herring so that the bait spins in the water at just the right frequency. He demonstrated how to slowly pay out line from his level-wind reels so that the bottom-bouncing weight doesn’t tangle with the bright flasher or the Day Glo spinner that trails behind it. He taught the twins how to recognize the difference between the sharp tick, tick, tick of a lure bouncing along the sandy bottom of the river and the lazy persistent pulse of a mooching salmon. And he reinforced how rare this moment was: so many salmon nosing up the river that catching them sometimes seemed as easy as trolling a bait off the bottom, setting the sharp hook in the fish’s jaw, and then holding on as the muscular fish tugged and pulled against the pressure.

This is another truism of angling: Fish where the fish are, and at least last year—and probably this year (see “If You Go,” below)—there was no concentration of salmon south of Alaska like there was in lower Columbia. Credit for the strong runs goes to spring snowmelt three years ago that flushed juvenile salmon to the Pacific, and favorable conditions in the ocean for the adult fish.

Gateway to the Interior
The Columbia River doesn’t flow into the Pacific Ocean so much as it comingles with it in the miles-wide mouth where sweet water from the east meets saltwater from the west. The lower end of this exchange zone is marked with a big red navigation marker. Buoy 10, it’s called, and from here upstream to the 4-mile-long Astoria-Megler Bridge—which connects Astoria, Oregon, with Washington State—is where seagoing salmon gather to begin their months-long migration up the biggest river in the West.

The standard method of fishing Buoy 10 is to “ride the tide,” drifting with an incoming or outgoing tidal push that concentrates salmon in the cooler water of the river. On a weekend when the fish are in, there can be several hundred boats drifting in unison, then motoring back to the start of the drift, then drifting again and again until the tide changes or the boat’s limit is reached.

And it isn’t just big welded-aluminum jet sleds, like Buzz’s Willie, on the water. Last September, I saw the most curious collection of boats: big, expensive cabin cruisers, motor-assisted sailboats, cartopper duck boats, antique bay trawlers, and nitro-fueled bass boats all back-trolling together for salmon. And the thing is, everybody was catching fish, no matter the size or vintage or applicability of their craft or the sophistication of their tackle.

It’s as though the Northwest’s salmon culture was just in hibernation these last decades, waiting on the fish.

A palpable sense of fellowship rippled among the participants in the bite. Trollers-by applauded as anglers in another boat landed fish, fishermen exchanged tips and tackle at the crowded boat launches, and Buzz was swarmed like a boy-band heartthrob when he was on shore. He passed out hundreds of dollars’ worth of Yakima Bait spinners and dispensed advice on how and where to fish the changeable river.

Fellowship of the Fillet
After dozens of years of salmon drought, it was like monsoon season had come to Astoria. Inside the institutional concrete walls of the cleaning station, where most anglers gathered to fillet their limits of chinooks and cohos, the atmosphere was as light and neighborly as at a county fair. Strangers donated salmon roe to those who wanted to cure it for bait. Others offered to clean fish for kids and elderly anglers. Fishing guides exchanged stories of taking three or four trips with different groups in a single day, limiting out all their clients in only an hour or two, and collecting hundreds of dollars in tips.

As anglers chatted and laughed, their knives trimmed out bright-orange fillets from the silver-sided salmon on the cleaning table. Dozens of fish turned into hundreds, filling coolers and making meals and memories.

“What a morning. My arms ache,” someone volunteered.

“Good to get my dad’s boat back in the water,” someone else said.

“Pretty fair fishing,” said an older gentleman, who was teaching his grandson to fillet fish. “Just like old times.”

Then he said, to nobody in particular but to everyone within earshot, “Hard to say how long it’ll last.”

This year’s Buoy 10 season, which is expected to rival or exceed last year’s in terms of salmon numbers, is from August 1 to September 7. Anglers can keep one hatchery chinook and two fin-clipped cohos per day. Expect Astoria to be swarming with anglers and for hotel rooms to be scarce.

A great overview of fishing conditions is Ramsey’s Buoy 10 Basics, or check with Oregon Department of Fish and Wildlife for fishing reports and regulations. For guides, lodging, and local fishing conditions in Astoria, Oregon, check out the Astoria Fishing Guides’ resource.