5 Tips to Catch Big Walleyes on Big Lakes This Fall 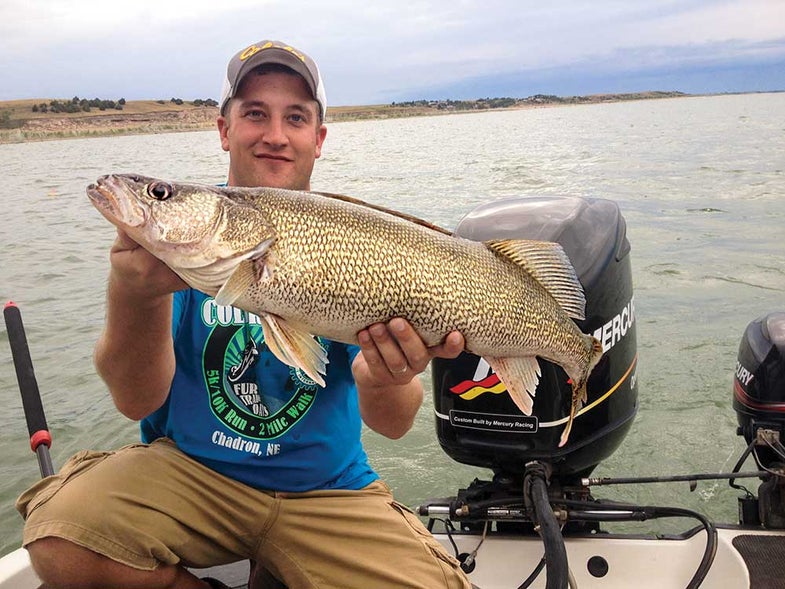 Just north of the legendary Wild West haunt of Deadwood, South Dakota, is a sunlit playground of steep gorges, clear streams, and fat trout. Spearfish Canyon cuts through the foothills of the Black Hills and should be a destination for the bucket list of any traveling flyfisherman.

However, even the best spots won’t produce if the weather turns bad. When a burst of storms washed out the trout fishing for me and my buddies from Cabela’s, we shifted gears in a hurry. Enter Robby Rhembrandt, a walleye fanatic, native Nebraskan, and Clam and Cold Snap pro. 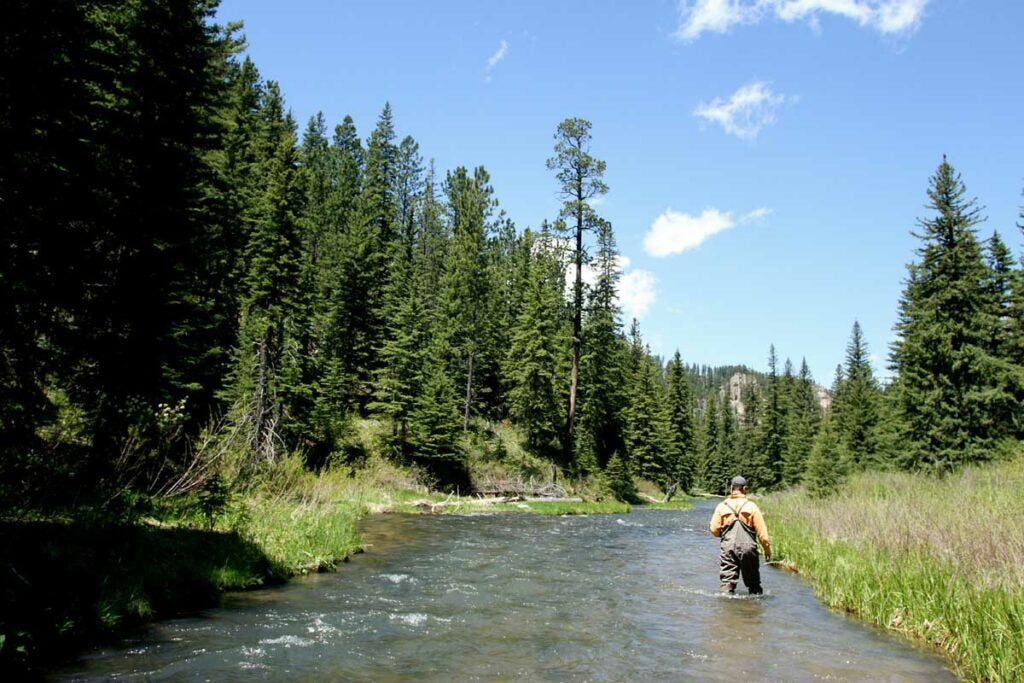 Rhembrandt offered a change of venue and target species. So we gave up on flinging flies and retreated to Bell Fourche Reservoir; in one hour, the two of us caught plenty of fish to make up for the lousy luck the previous days. Here’s what I learned from Rhembrandt about fishing big reservoirs, and how you can apply that knowledge to land more fall walleyes.

1. Boat control is key
No matter what type of presentation you’re using, one of the most crucial factors in determining success is how you handle your boat. You must be able to precisely control your speed and direction. And Rhembrandt is a firm believer in the “big-wind, big-­walleye” principle, so he’s often battling nasty conditions. He relies on an electric trolling motor (he swears by the Minn Kota i-Pilot for its GPS capabilities) for tracking precise jigsaw patterns in big water and a gas motor for power.

2. Autumn trolling pays off
Instead of pitching jigs at this time of year, Rhembrandt typically catches bigger fish while he’s on the move. Start in 15 to 20 feet of water and experiment with the depth—go shallow before you go deep—until you strike fish. Find cover and run big crankbaits with lead cores. The speed sweet spot falls between 1.8 and 2.2 mph, although if you’re not getting bites, experiment beyond that range, too. Rhembrandt closely monitors his speed until he catches at least three walleyes. Then he averages any different speeds in his head to calculate a benchmark pace. 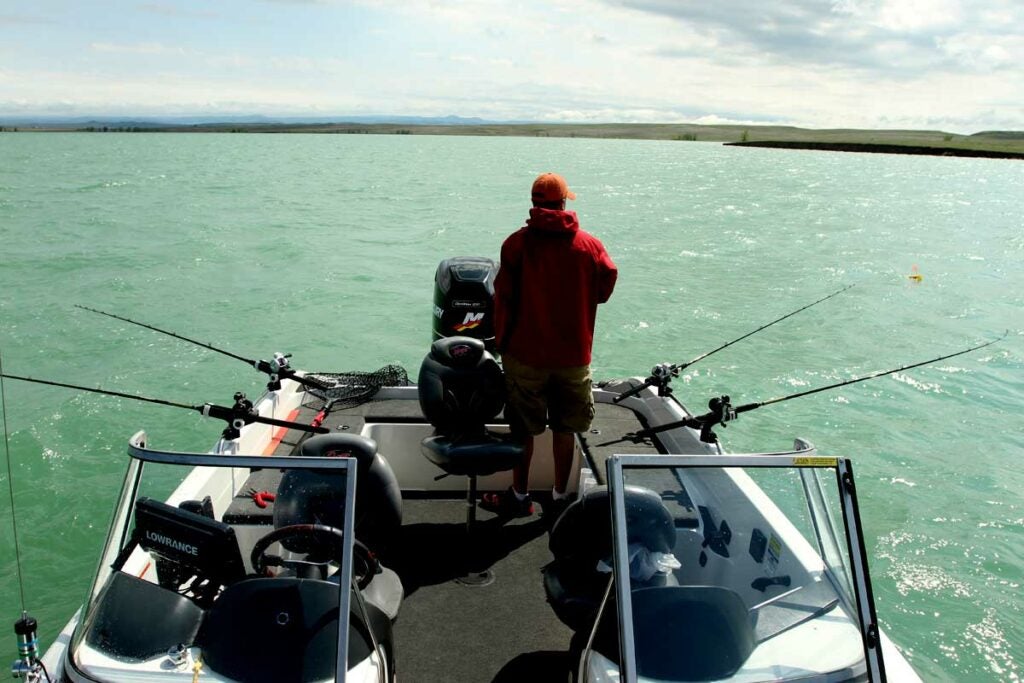 Rhembrandt surveys his trolling setup after a big storm on Belle Fourche.

3. Gear up
Although he uses planer boards whenever he can, Rhembrandt says they aren’t necessary for success. You should, however, invest in a line-counter reel and try fine-tuning your troll with a program like the Precision Trolling app. Pair it with a spinnerbait instead of a crankbait to avoid snagging on submerged structure, and you’re in business. Other smart—and proven—choices include pulling crawler harnesses or lindy rigs with worms or leeches.

4. Trust your electronics
If you’re not marking fish, go find them. That doesn’t mean you won’t catch a lone lunker, but Rhembrandt stresses the importance of marking fish in order to consistently catch big walleyes. If you’ve trolled for hours, explore more of the reservoir and expand your search to shallower waters and areas with hard bottoms. Don’t be afraid to think like a bass and fish submerged timber. 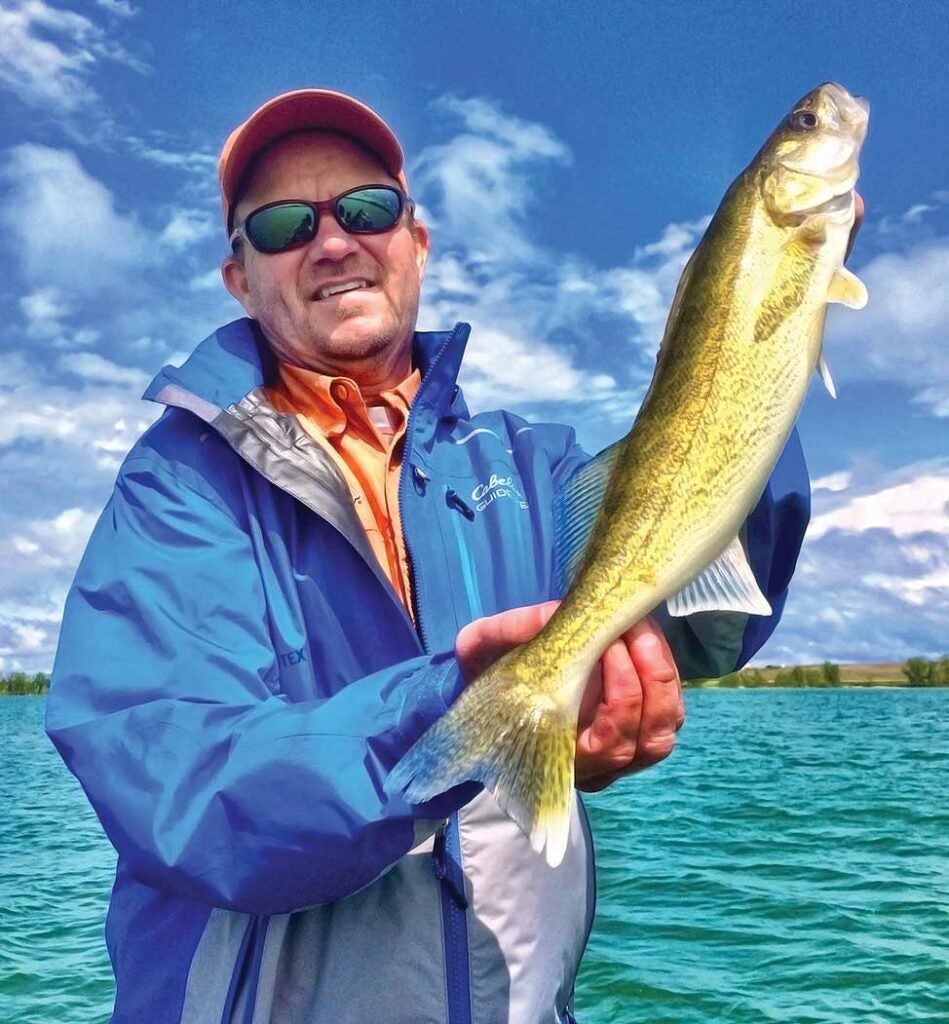 Chuck Smock of Cabela’s with a walleye on Belle Fourche.

5. Shrink your baits
If you’re marking fish and still not drawing bites, downsize to a smaller bait before you go bigger. This is true for both trolling and jigging. Rhembrandt gradually downsizes baits to the smallest practical size before going bigger to try to trigger fish.

“Oftentimes we think of big walleyes as eating big bait. And I’m not saying they don’t, because they do,” he says. “But for every 6-, 7-, 8-inch minnow or bluegill a big walleye eats, he’s eating 100 small minnows. So you’re more likely to trigger bites with a smaller presentation.”