How to Fish a Pond

It sounds simple, but every angler has to start somewhere 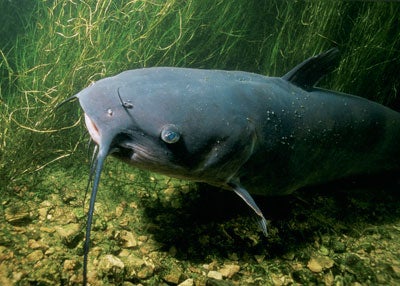 They’ve fed families and provided angling recreation for centuries. You don’t need a lot of money or a fancy boat to fish them. A lot of us were introduced to fishing on their banks, and some might wish to go back to those days when the sight of a bobber slipping under the water was all we needed to make us happy.

Farm ponds. Stocktanks. Millponds. Watershed lakes. By whatever name, they’re small waters that are easy to learn and on which we can hone our skills.

“Farm ponds come anywhere from a half acre to thirty acres, but I’ve always thought that fifteen acres or more leans toward a lake,” says Bill Dance, television fishing icon, avid pond fisherman and lake designer. Some farm ponds are constructed in gullies or valleys, some are impounded and some are just round dish-type holes in the ground.

Most ponds have a dam of some sort. Many have off-color water, sometimes even muddy. Ponds can provide good fishing for bass, bluegills and even catfish. Don’t expect crappies in small bodies of water, though—the species is so prolific that crappie populations occupy too much of the available water space. In fact, most game and fish departments won’t even consider stocking crappies unless the body of water is at least 50 acres in size.

A small pond is aminiature version of a big lake: Fish do basically the same things in each.They relate to key structural features that are available. They’re affected bywater temperature and by water clarity just as their big-water cousins are.Anglers should look for them near the same sorts of cover and structure, and fish for them accordingly.

Here, then, is atypical approach to pick apart a pond for largemouth bass, bluegills and catfish.

WHERE In late spring and early summer, bass are most likely to have recovered from their postspawn doldrums and will be on the prowl again. Look for them inshallow water, or relating to some type of cover—stumps, laydowns or grass beds(A)—anywhere in the pond, especially in the early morning and lateafternoon.

The best places tofind bass are where two types of cover overlap, such as a fallen tree in a weedbed (B). In midsummer, bass will move to deeper water and hang around anyobject that’s located along any channel or deeper point (C), where the oxygenlevel tends to be better; any water flow can be a prime spot (D).

LURES/TECHNIQUES If water clarity is poor, vibrating lures (spinnerbaits, blade baits andlipless crankbaits) come into play; in clear conditions, try crankbaits andspinnerbaits. Slow down with softplastics (teamed with light line and fairlylight sinkers) during the hottest portions of the day. Topwater plugs,buzzbaits and soft and hard jerkbaits will work in mornings and evenings.

PRO SECRET If the water in a pond is clear, try using a soft-plastic worm riggedwacky-style. Embed a 4/0 wide-gap hook through the middle of the worm and castit out on 10-pound-test monofilament.

If there is alayer of moss around the pond, use a weedless hook and cast to the outside edgeof the moss. Let the unweighted wacky rig drift to the bottom, then twitch itand slowly reel up the slack.

WHERE Except in the Deep South, bluegills and other sunfish will be bedding fromspring through midsummer in most ponds; prime summertime spots are flat pointswith fairly deep water nearby (E). Fish move to drop-offs at midday (F). Lookfor spawning beds around the time of the full moon in May and June.

LURES/TECHNIQUES Earthworms or crickets are the best bait to use in the late spring. As summerprogresses, bluegills will become more aggressive and susceptible to artificiallures.

PRO SECRET Keep as many of the sunfish you catch as the law allows; you’ll have themakings for a great fish fry regardless of the size of the fish, and you’ll bedoing the pond fishery a favor. A pond’s sunfish population can get out ofcontrol in a hurry. A number of female bluegills might all spawn with one male,so breeding success each year is high. Removing stunted bream will increase theaverage size of the survivors within a few summers.

WHERE Although bullheads and channel catfish tend to prowl close to the banks during low-light periods, look for most to stay in the deepest portion of the pond (G)or around drop-offs near current (H) during warm weather and the brightest part of the day.

LURES/TECHNIQUES Fish earthworms or scented baits under a float, with the bait positioned near the bottom. If the water is too deep to use a clip-on or pegged float, use aslip bobber. Otherwise, try tight-lining with a fish-finder rig: Slide a small barrel sinker on the line, tie on a small barrel swivel followed by 16–20inches of monofilament, and then add the bait hook.

PRO SECRET Nowadays a lot of farm ponds are stocked with channel catfish, which do well in small waters with minimum current. If channel catfish are present, fish for them at low-light times with in-line spinners, such as those made by Mepps andBlue Fox. Channel catfish in farm ponds are especially predatory in early to midsummer, when the fins of young-of-the-year bass and sunfish are still in the”soft-ray” stage of development.

Itching for Poison Ivy Relief? Summer is poison ivy season, but you shouldn’t have tosuffer. Protection and relief are available from a new family of lotions thatblock, remove and neutralize the effects of the toxic urushiol oil secreted bypoison ivy, poison oak and poison sumac. Here are some products to lookfor.

CORTAID POISON IVY CARE The Removal Scrub in this two-part treatment kit binds to the oil of poisonivy, oak or sumac so that it can be washed from the skin. Cortaid Poison IvyTreatment Spray heals the rash as it deadens the itching sensation. ($33 each;cortaid.com)

TECNU EXTREME The active ingredient is Grindelia robusta, a flower oil that relieves itchingand reduces the pain associated with poison inflammation. The three-in-oneingredients are said to cure itching, speed healing and prevent rash if usedimmediately after exposure. ($15; 1800itching.com)